I met a Mantid forum member at the half price bookshop today and got some of my most desired mantids, Phyllocrania paradoxa or Ghost Mantis. I think they look more like HR Gigers aliens with their weird head decorations so they ought to be called Xenos Mantids! The seller said they were L5/L6 but are still only 1" to 1 1/2" in size. Despite this they are not afraid to climb on you and explore the world. I played with the black one for some time he didn't want to go in his forest the other two chose their own enclosures but black wanted to break for it and wander all over my arms, I didn't have the camera out at the time.

Now that they've settled into their usual inverted perch positions, here's shots of them each in their own 2 gallon candy jar vivarium habitats with live plants and mosses. I hate seeing these guys in a bare deli cup and a single twig.

Green (female? this one is the biggest)

I'm working on getting some closeups, my camera can't seem to do good macro even though it has a macro setting. Are there any good point and shoots like a Fuji J20 credit card size model that also have good macro or is that mutually exclusive? I hate those big chunky cameras like my old Coolpix5700.

i see nothing like any bug ive ever seen can you high light your photos.
where day at man

im going too have to get some better containers for mine , haven't had a chance all week to get them , tried biglots but all they had were frosted plastic containers and they smelled very toxic to me ,
I do love your set up , Ill be copying as usual thanks for the cool post

I'll have to work on the closeups like I say, my camera sucks for macro and these guys exist in macro! LOL

What looks like dead leaves hanging straight down are the ghosts. The green one must know it's green - went straight to the Hygrophilla and has been there all day. The brown and black have been on the twigs.

I got my plastic candy jars at The Container Store, they do have a website if there are no retail locations in your area (check the site) and here are the candy jars:

I think you will need a much taller enclosure for the adults of your Chinese mantids than the candy jars. They need double their height to molt correctly upside down so your full growns will need at least 8" and maybe even 12" to complete a molt so a vertical 10 gallon or some other taller enclsoure will serve you well for their final molt or two. You can certainly do progressive terarriums, small, medium then large. I love decorating tanks and get a fresh view so that's probably how I would go!

i didnt see it in there may be i need another look.
the money that is,
the mantids are so cool i want this one too

If I have any luck Jimmy, you'll have some next year!

These guys can be raised communally in a large tank together but since I only have the three I've got them separated until mating time. I don't wanna risk loosing either of the boys to a hungry lady since apparently these more exotic species are NOT parthenogenic like the Chinese and Carolina mantids.

As long as you're willing to supply flying food, they don't live long on crickets and roaches apparently. I've got a deli cup full of Blue Bottle fly pupae and wood chips in my fridge. You toss a "fly bean" into the tank every day or two and as they warm up a fly hatches from it's cocoon and the mantis get's dinner!

I went to get a butterfly net to catch small moths later this summer and the store I went to has the butterfly nets and bug houses NEXT TO THE PESTICIDES!

Get the Ghosts now and buy the Orchids whenever they come up, seems nobody has any Orchid nymphs at the moment.

I've got an order in for 3 spiny flower mantids (Pseudocreobotra wahlbergii "essentially the same as" P. ocellata) getting my nymphs on the 20th.

Not my pic but what the mature spiny flowers look like: 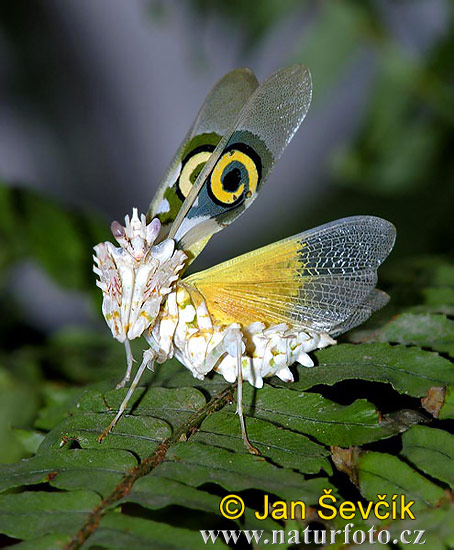 Orchid Mantids seem prone to a sort of blackening disease. An old TF member had to do a radical amputation on one of his Orchids this past March who's forearm turned black and the black was spreading for some reason. He seemed to have stopped whatever it was by doing the arm amputation but I'd hate to have to do something like that - of course so did he!

Here's a place to get housefly and blue bottle fly pupae (bigger meal than fruitflies), put one "fly bean" in the tank every day if you don't wanna hatch them out separately and gut load them, stun them and then put them in the enclosures. keep the beans in the fridge until needed:
http://www.mantisplace.com/feederinsects.html
Buy PUPAE not spikes, spikes are maggots! lol

Blackie ate his first meal in his new home - He's got a big old butt now.

Spiny Flowers are similar the Orchids but have a green and orange pattern on a white background instead of pink and orange pattern on white. They may or may not be the same size as Orchids, people are always giving varying size measurements for all the mantids, best to watch you tube and see the various handling videos then you get a better judge of size.

Here's a "key" I made to the ghost mantis anatomy for someone on another forum, thought I'd share it here:

I forgot to label the antennae, very surprised it showed up in the pic, they're always vibrating and twitching them.

Location
At home, and you?

Spectacular, they are amazing little creatures, and that they've evolved like that, woah!

swords said:
I've got an order in for 3 spiny flower mantids (Pseudocreobotra wahlbergii "essentially the same as" P. ocellata) getting my nymphs on the 20th.
Click to expand...

Awesome! Good luck with all of them! Make sure you post some photos of both the ghosts and the spinys as they get older.

Oh cool you got 'em. Yeah. They do stay small. Don't you love how they move like a leaf in the wind? How they flutter and dance. great species, enjoy.

Yes, their movements are so comical. The green one dances and travels around the most and the black one waves at him/her all the time from his perch.

I've only just begun collecting them! It's good to desire various ones for a while which makes you do lots of research before buying your critters - at least hopefully it does.

I like my two Ts but they are so darn light phobic, I've tried putting their enclosures on the non-lighted shelves under the lit ones and they have been sulking/hiding their faces ever since so I moved them back to their dark closet and they relaxed a little. My rosy has still not been the same ever since very jumpy and shy now, I hope it's just premolt and not unintended psychological damage. I can only imagine if I had put them directly under the T5s... Mantids on the other hand are sunbathers so bright lights for their plants are no problemo - the perfect weird display insect for planted vivarium.
You must log in or register to reply here.