What did you put in it? (Sorry still sleepy so i skipped thru pages lol)

But then I came home Friday he took off and hid behine/under the rocks. Hopefully he comes back out sooner than later.

Well, he ended up being gone for 4 or 5 days... but still hasn't decided where he wants to be. Every night it's behind the rocks, in the morning it comes back out to one of two spots, basically.. and during the day it will go back behind the rocks and back out, twice generally... I kinda feel like it just can't climb up the rocks to get where it wants to be. But I have no idea on their climbing abilities... Maybe it's just still getting used to the new place, I dunno. What say you?

Are you sure it's still moving? I've seen many times where the foot of the anemone settles into one place, but when the animal opens it will appear in different places depending on which side of the rock its attached to it pops out on. They can climb straight up the sides of the tank, so climbing up the rocks is no problem. It isn't unusual for one to take a couple weeks to settle in to a new home, so I wouldn't worry too much. It's a very goodreason for putting a nem in early in the stocking of a reef. Having one wander over an expanse of essentially bare rock is a cheaper trip than having it wander through a bunch of corals, stinging as it goes
Last edited: Sep 29, 2014

I don't think so because I can see it under the rock on the left of a hole. When he is "out" I don't see him streching past that spot, in fact, I can't see him in that hole at all anymore. I ran a camera at one picture every 10 seconds all day from emerging to going back in... but of those 4000 images, I can only get this old phone that I use for that to render about 800 or it cancels for some reason. :-\ so here is most of him coming out in the morning... can you tell if he is moving or just opening?

Yep, pretty sure he is mounted under there and opens up each day. We've watched him retract a few nights... Today I fed him a larger chunk of fresh shrimp and tonight (so far) he is staying out. Not sure if it's because he's eating large food... or just deciding he may do that now. We will see!

Also, picked up a new (much smaller) anemone this past Sunday, he's fitting in nicely. Only moved about 2" and then planted pretty hard into a hole. 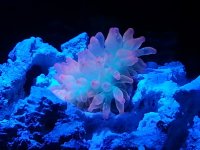 Any pros able to tell me what this is? I pulled it off of some egg crate in my QT that I have some Xena on... Looks tubeworm-ish, but doesn't retract or anything. What you see is what it is.

Riddle me that, and I'll get an update posted on the display tank!

Edit: for size, that 6 is the bottom of a 6oz plastic cup. So, it's pretty small.

It's a bryozoan. Harmless, even slightly beneficial due to its filter feeding.

Side note SubRosa! I took that thing and put it under my son's microscope.. and was able to create this video:

Newest addition to the display tank! (I have some new corals in QT, but more on those when they get moved and looking better )

Beautiful Tang! Do you have any full tank shots?

Thanks guys, no new whole tank shots, no... Not really much to see from afar. Here are some more recent photos of some other stuff in the display tank.

This RBTA is smaller than the other two I have, but it has a blue or green color on the tubes, stays bubbled, and has some striping on the bubbles which makes me like it more than the others... This is the one that I pictured earlier that was really see through when we got it, clearly was missing color- it is easily 5x bigger than it was too. (the other 2 are plain red, and barely ever bubble... It's one that split, so I'm going to get rid of one very soon... really don't need two of that thing :-\ )

This is the other Anemonie than the one you saw the Tang by earlier...

I just read through this thread & saw your corals. Thats an awesome coral start you had from your bud at reefcentral. I've always loved natural reef style aquariums although FOWLR tanks can still be interesting with the right species. Natural reefs are are pretty much a slice right out of the ocean =)
Those are beautiful anemones you have going on there Andrew!

Wow. This thread has everything! didn't know some of y'all were into Reefkeeping!
Dang Adnedarn... I'm actually shutting down my old reef... I just sold some large colonies of Rasta, Blue hornet, Red hornet and Purple People Eater zoas. Also had a huge Red Planet Acro.
Sigh.
You must log in or register to reply here.

How do I know how much pressure comes out of my water tap? R/O Pre-Shopping Questions