I got this cobra lily back in June and it sent up two new pitchers. I noticed the red spots on the pitchers and assumed it was just bugs inside or they were getting slight bruising from something. But recently the red has been forming on new growth along with new growth starting to brown or not make it. I then half transplanted it out from its smaller pot to a larger one and saw there was a stolon running up the soil mix ( so I think, it was a long white root growing vertically) and the plant still felt firm so something had to be going right. When I originally had it, it in a box with a hole cut out and would sit on a bag of ice along with top watering at noon and around 8pm with iced water. I brushed the pitchers with Physan the day before transplanting it to this larger grey pot. It gets maybe a couple hours of direct light throughout the day and bright indirect for the rest. Day temperatures can get to mid 90's in high humidity with mid 70's at night.

The options I think are affecting it are the heat since the cool box broke down and did not look like it was necessary since it still sent up a pitcher without it. Or that it was the red disease/fungus affecting it and that a little more time is needed to see if it was treated. It could be the water, because it is tap ice cubes with rain water, but I have many other Sarracenia, Nepenthes, and Sundews that all get watered with tap that have gotten by for years unless cobras are more sensitive. 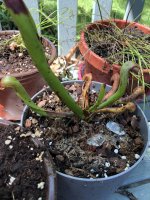 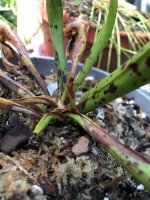 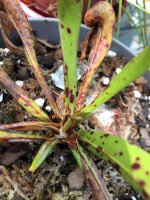 Whats the medium? sphagnum and bark chips? Has the pot got holes in? At 90F it shouldn't cause problems if its wet enough.
But I have to say it does look like its collapsing.
Cheers
Steve
M

Steve Booth said:
Whats the medium? sphagnum and bark chips? Has the pot got holes in? At 90F it shouldn't cause problems if its wet enough.
But I have to say it does look like its collapsing.
Cheers
Steve
Click to expand...

Sphagnum, orchid bark, perlite, and peatmoss. Yes it has drainage holes. I ended up moving it indoors under growlights next to some cephalotus. While its growth point ended up turning brown, the plant below is still firm and light in color so maybe its sending out better growth in stolons elsewhere in the pot. I'll just have to wait for now.
You must log in or register to reply here.