Algae or something growth in my tank (split thread)

I had a little bit of stuff growing in the tank before, did a water change yesterday and woke up to stuff all over the place...

It's not dino is it? 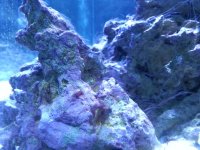 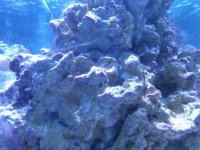 Your mess looks like slime of some sort. Practically all corals and many inverts will produce slime in response to irritation, and things as simple as using freshly mixed saltwater or even pouring water over them roughly can irritate them enough to cause them to slime up in response. It should disappear within a day.

Thanks for chiming in! Hmm, I really don't have that many in there yet (they're in QT still)... This stuff is all over the sand and rocks, not just in one spot.
maybe this helps better than pictures do...

I never saw any of that slimey stuff in my old saltwater tank with some live rock but I looked up "stringy slime in reef tank" and a lot of posts state it could be bacterial strings which are exacerbated by trapped food or waste or nutrient producing particles and should be siphoned or brushed / collected off the rocks as best you can. One poster claims it can clog up your skimmer if not collected.

Hi Andrew,
I had been hoping for an update! Although, sorry to hear that its not a particularly happy 1. lol
SubRosa is correct in that many corals will produce this mucus but I do not see nearly enough to account for what you are experiencing.
What you have there is red/pink slime algae. Yes, it can spread overnight. Its time to take out your test kit.
pH?
Alkalinity?
Nitrites?
Especially Ammonia & Nitrates?
I wouldn't worry about calcium or other elements here.

What is your water source? Was the mixture aged for at least 24hrs & what SG is it now? What temp is your tank at now & do you toss in a heater to allow for an easy transition on inhabitants & = your tanks temp.
The issue is either a bad water source or that something big definitely died overnight & is hidden under a rock. Or possibly that many small organisms died. Possibilities 2 & 3 may all be due to possibility 1.

What does your cleanup crew consist of?
After testing start another batch for water change from a good source & allow it to sit for 24 hrs min. I prefer a few days to a week. I also never change more than 1/3 water in 1 shot. Upon this 2nd water change test for ammonia, trates, temp, & sg. Check for dead inhabitants. Use an ariline tube to vacuum up as much as slime as you can.

1 more thing: sometimes hitch hiker sps corals will send out these strands so also look carefully to see if the slime is growing everywhere or only coming from certain corals that blend in well.
Last edited: Jul 11, 2015

Hello! I did take the numbers down earlier today... Here are the results:

Water source is RODI water stored in a new Brute garbage can on the porch. It is transfered into a large plastic barrel next to the tank and mixed with RedSea coral pro salt and circulated and heated for usually 3 days, this time I only got about 31 hrs on it.
Edit added this line: OH! I do 22 gallon water changes, and my complete system is somewhere around 140 gallons.

Cleanup crew is 3 different types of snails, hermit crabs, arrow crab, peppermint shrimp and diamond goby (if you want to count him) I've not seen my cleaner shrimp or lawn mower in a couple weeks now- I had battled dino pretty heavy and I assume they didn't make it through the ordeal of that. But I've never seen their bodies. This is also where I believe the phosphates are from, I used DinoX to kill that stuff, and put a reactor of charcoal and GFO on there after the water chage as instructed by dino-x (refreshed at yesterday's water change) but I guess it didn't suck it out fast enough.. Probably should have used the phosphate sponge to suck it up faster...


I do keep a pretty decent QT going, so everything (except the newest addition seen in the video (white tail bristle tooth tang) since he was too big for it) is inspected pretty well. So I don't think any hitchhikers have made it in.

I think that answers all your questions 0_o
Thanks for the help!
Andrew
Last edited: Jul 11, 2015

I have some of the mixed salt water still left, did you still want me to test all those again on the fresh water? :-\

Glad to help solve this

Those are very good parameters & I was actually expecting to see some readings on ammonia & nitrates. Lol They're perfect! I've never attempted at ORP control. For salinity, 35ppm would be about 1.026sg so thats also fine but being on the high end really only benefits a heavily stocked reeftank. Do you use a hydrometer, tds meter, or refractometer? Make sure they're rinsed with warm water for accurate readings.

Glad you already started running charcoal which was going to be my next recommendation as well as changing/cleaning any mechanical filter that you may have. For a 140gal a small death would not account for an over night algal bloom of that magnitude. I watched the video again & realize you did say its everywhere not just localized growth. A slow increase in growth can sometimes be accounted to overfeeding or lights that need to be changed; but, an overnight bloom is always a result of some sort of die off. This may be due to a few things. Both beneficial bacteria & natural growing plankton in the water column may have died due to temperature &/or salinity shock right after the water change. 22 gallons is a safe amount of change but if the difference in the new water was vast it might have made for a quick massacre of the more delicate inhabitants. A salinity reading when the salt is first mixed is inaccurate & needs another reading & possibly more salt or water after a day or so. Another option could be that a contaminant was introduced during the change somehow (Not as likely though because I'm sure you have good practices that you've been doing for while). Another option is flow. If one of your pumps was clogged this will quickly lower the water quality as far as oxygenation & temperature & cause an overnight bloom. This can be as simple as some snails deciding to go clean around the intakes of some pumps so its good to have many.

What sort of circulation do you have going? I would definitely increase flow or create better flow to prevent any dead spots on the sand &/or rockwork as well as vacuum up some of the gunk on another partial change if its not gone quickly.

The 5 must have snails in my cleanup crews (along with others) are these: a few turbo snails, a few trochus snails, a few nassarius snails (carnivorous snails great 4 big tanks b/c they will be the 1st to cleanup a dead inhabitant), mass numbers of cerith snails, mass numbers of astraea snails (another smaller type of turbo snail). I think I saw a trochus in your vid or might have been an astraea. Hermits are good but blue-leggeds will always grow up to be snail murderers. Ceriths and astraeas will eat green hair & red slime contrary to what you may have heard.

Thats all I can think of at the moment but I may add more info if it comes to mind. I hope that helps narrow things down at the very least since everyone's tank is different.
Last edited: Jul 11, 2015

I use the salinity probe of the Neptune Apex system, and verify it against a refractometer that I calibrate just about every time I pull it out.

I changed out the filter socks yesterday, and well as cleaned up the protein skimmer when I did the water change, that's really the only mechanical filters I have, I guess.

Like I said, I did have some growth before hand, but when I did the water change I sucked it off the sand and rocks-for the most part- using some airline tube and a long piece of hard line I have hooked to it. It was just a surprise to see so much first thing in the AM. It was definitely more this morning than I had removed yesterday.

Flow is:
2 x jaebo wp-40 http://www.amazon.com/Jebao-WP-40-Maker-Controller-Aquarium/dp/B00FSALYTS I can't really go anymore than that, this already tends to move some of my sand around, but have toyed with the idea of getting a smaller one to put somewhere, I just don't know where since these are on the left and right blowing the back wall (rocks) and down the front wall.
return pump: diablo dc5500

I tend to use another pump to manually blow off all the rocks into the water column when I do the water change, but I did not do it this time.

I believe I do have nassarius (love them coming out of the sand ) cerith, and astraea I had some turbos but they always seemed to end up upside down, and dead... so I think I'll leave those guys out. Although after the dino battle, it seems to be a lot less snails, so I think it's killed off some of them too. Probably time to get some more, mainly I wanted to make sure I didn't have another outbreak of those before I spent the cash!

Andrew it seems that you definitely have a great setup
Everything just points to bad luck on a water change & it should be gone in a few days. Yep can never have 2 many snails I believe & those nassarius are very cool!
Those are my favorite types of pumps b/c they can not get clogged & great lights as well. I would love to see some of your corals if you have any other pics. I did a test with verious easy & difficult zoanthids (since many grow so well) with t5s, metal halide, & led. I got the best growth with MH but under LED the colors turned out amazingly vibrant & didn't need a chiller.

I picked up 12 more Astrea snails yesterday and will grab 12 more Cerith at the end of the week (they were out) with that said, that algae stuff is basically all gone at this point! Thanks for the help (posted some pics in the build thread too )
Andrew

Awesome news! Glad to hear that things are back to norm =) Those snails are awesome. After I realized how many I could have its rare to find me needing to clean the glass unless for strong coralline growth. No problem & thx I'm reading through your thread now.
You must log in or register to reply here.

I
Any hope left in my Argentii?