Don't think I have anywhere that stays quite warm enough all year for them, so I'm just living vicariously...

hcarlton said:
Don't think I have anywhere that stays quite warm enough all year for them, so I'm just living vicariously...
Click to expand...

10 gallon aquarium + heater = instant petiolaris terrarium. My ambient temp range is consistently 65-75F but I can keep the plants at 80-95F (with excruciatingly high humidity) pretty easily. I suppose some of y'all with more temperate climates might have a bit more of a struggle this time of the year if your grow areas get a bit colder than my apartment, but there are other ways to insulate to keep the heat in.
Last edited: Dec 9, 2019

I should reword: where I currently live, I have no place that I could convert to a proper environment that isn't already taken up by plants and animals (and my family probably would not smile on me putting a plant tank in my sister's or my parents' bedroom, about the only spaces left).

hcarlton said:
I should reword: where I currently live, I have no place that I could convert to a proper environment that isn't already taken up by plants and animals (and my family probably would not smile on me putting a plant tank in my sister's or my parents' bedroom, about the only spaces left).
Click to expand...

I'm guessing that many, if not most, who read this will know exactly what you are saying.

Yeah I commandeered the (never used) dinner table for mine, but I think that's the last bit of space I'll get away with taking over for plants....
Last edited: Dec 10, 2019 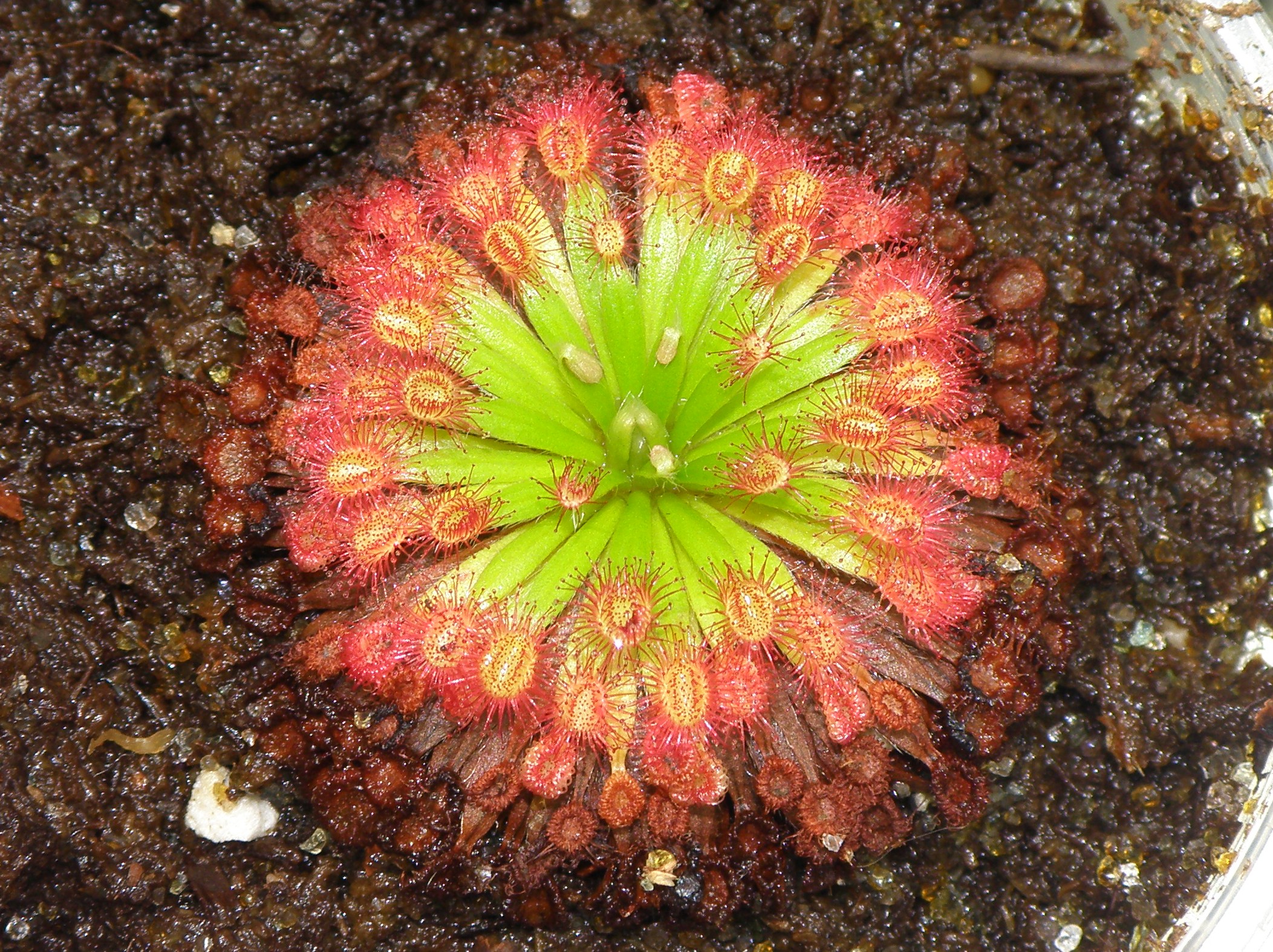 I've been very happy with this form of Drosera fulva, with its pinkish-red traps and brilliant green petioles but I want more of them and don't want to wait for seed. And I haven't been too successful with leaf pullings. Here's how I have been multiplying my petiolaris plants. I take a very sharp knife, generally an X-acto but anything razor sharp will work, and carefully removing the plant from the soil with as much root intact as possible I cut it into quarters. I then plant each section in fresh soil and keep it in the same conditions it was growing in before. I have had very good luck with this technique, sometimes even getting more than one plant from each quarter. It does take some courage the first couple of times but it really is pretty safe. It can also take some patience requiring two months or so before new growth is seen on each portion that is going to strike (you may not have 100% success but will likely increase your number of plants.) More sure than leaf-pullings and less involved than growing in sterile media. 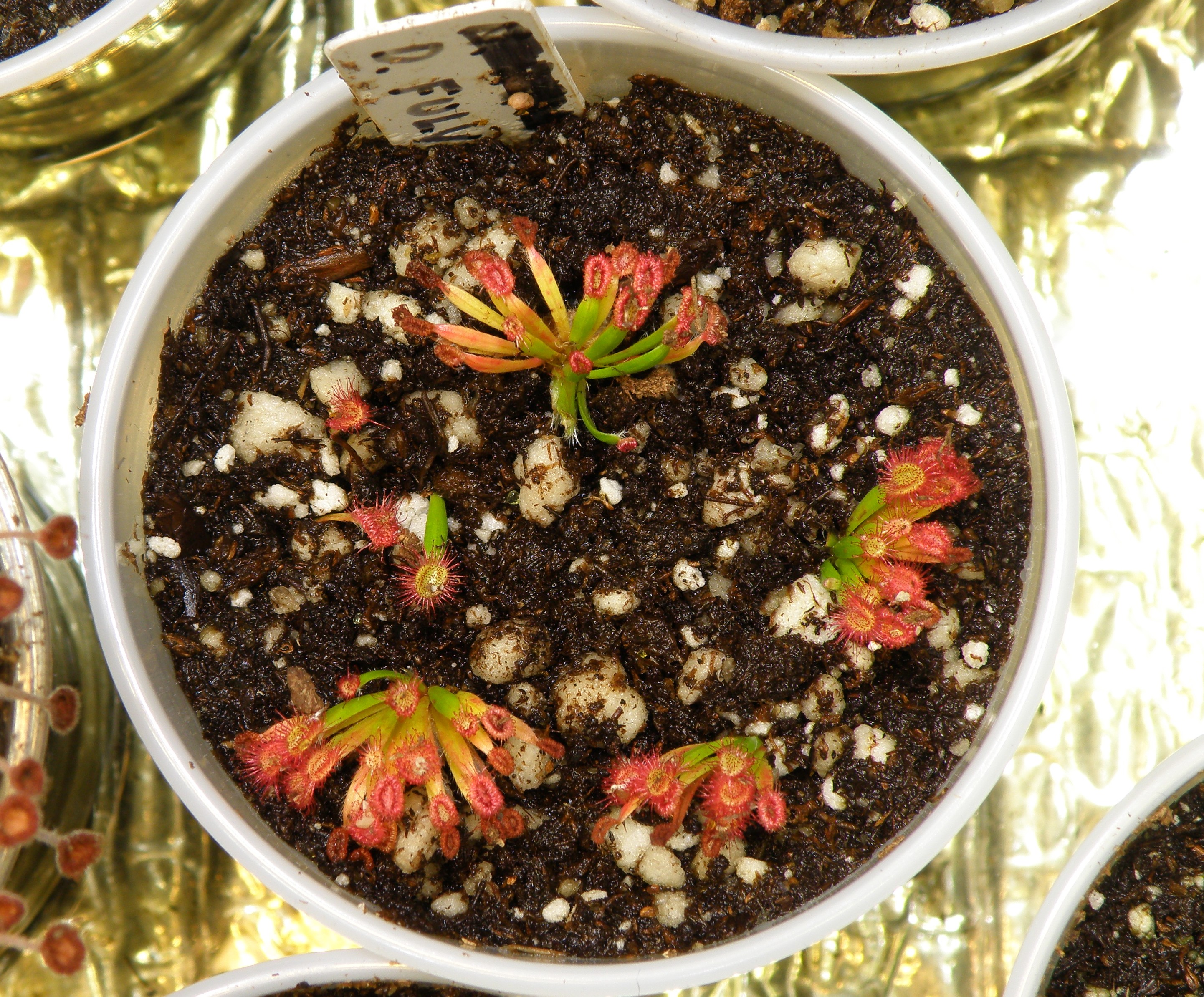 That is a cool looking one! I'm really enjoying this one right now. 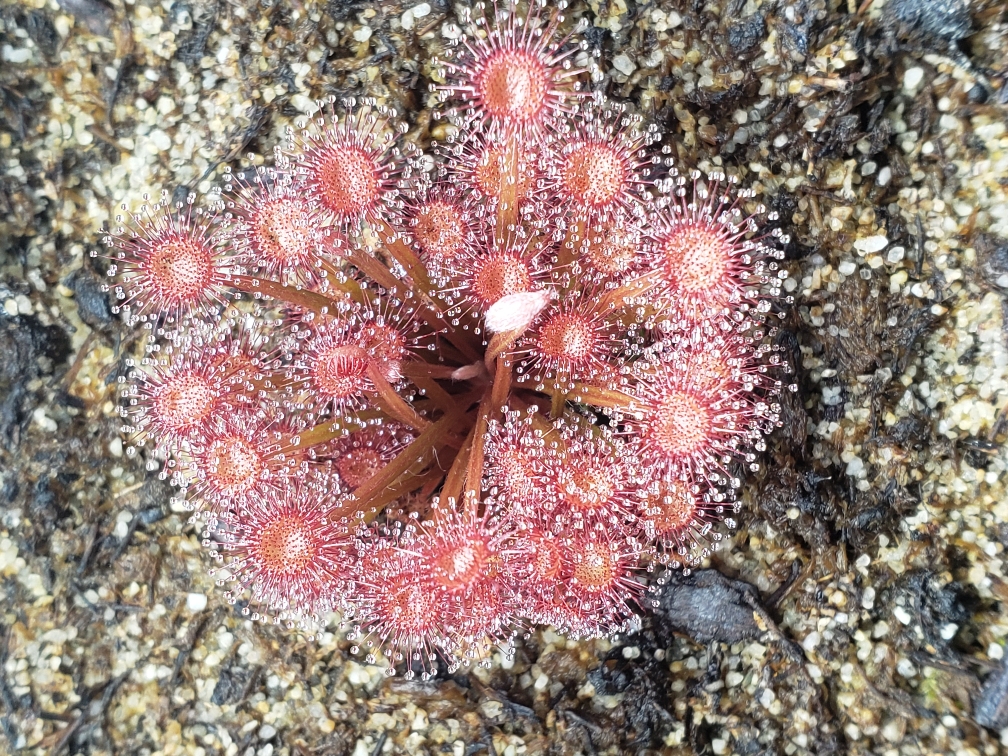 'Very nice! 'Looks like more than one individual in there. What species, or cross, is it?

It is D. dilatato-petiolaris
There may be a split forming, but if so it's really new.

Life has been hard in the hot tank for the last few months :concern:. I have treated for a nearly-microscopic fly and some of the plants have been assaulted by black mold. Spraying all of the inhabitants of the terra with tobacco tea set things back but did seem to remove the insect pests. In addition I have lowered the humidity, increased the circulation and sprinkled a lot of powdered cinnamon and the mold is now diminishing. On the plus side I have added some spectacular specimens that I hope to highlight more in the not-too-distant future. Here's the best of how it is now: 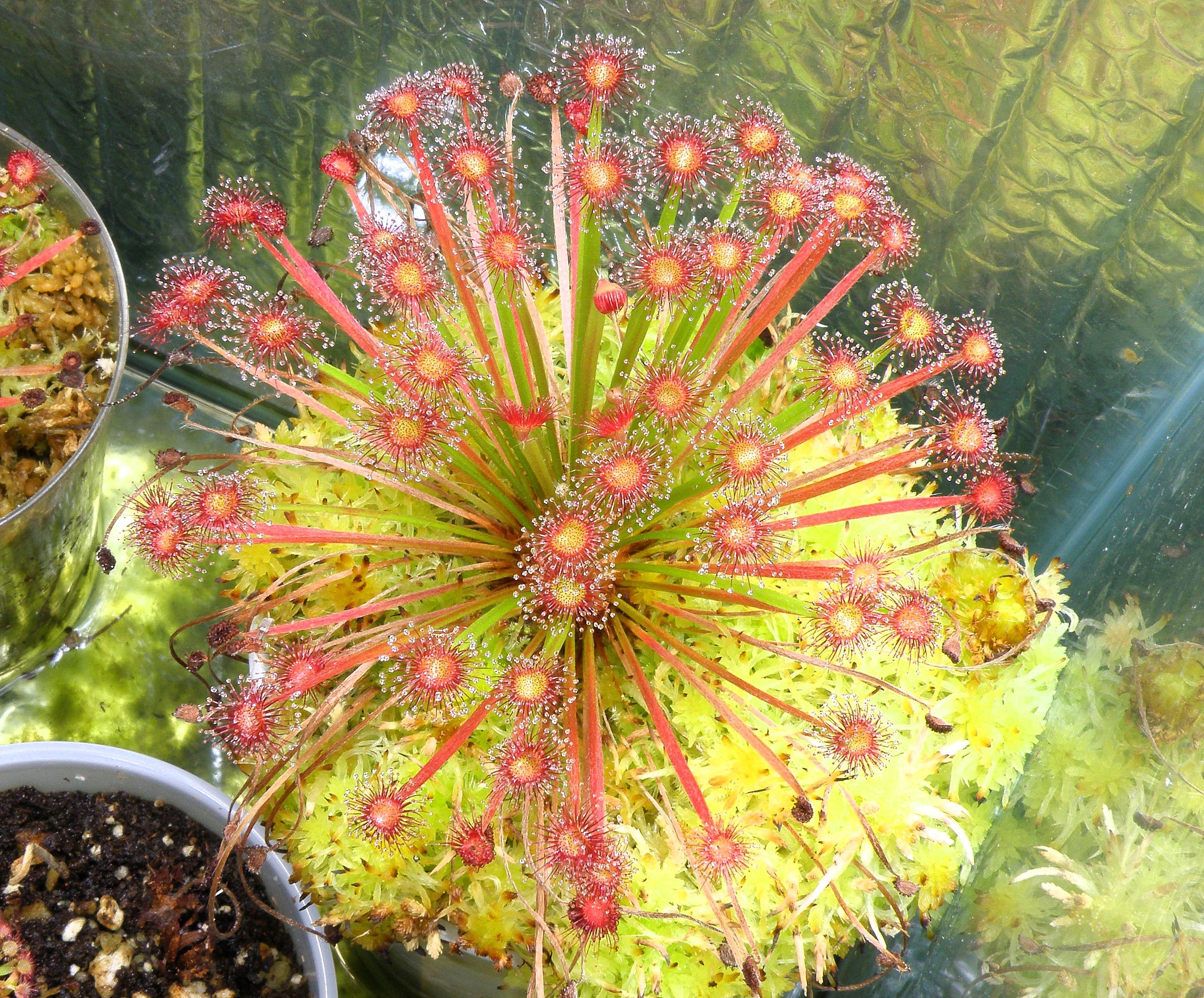 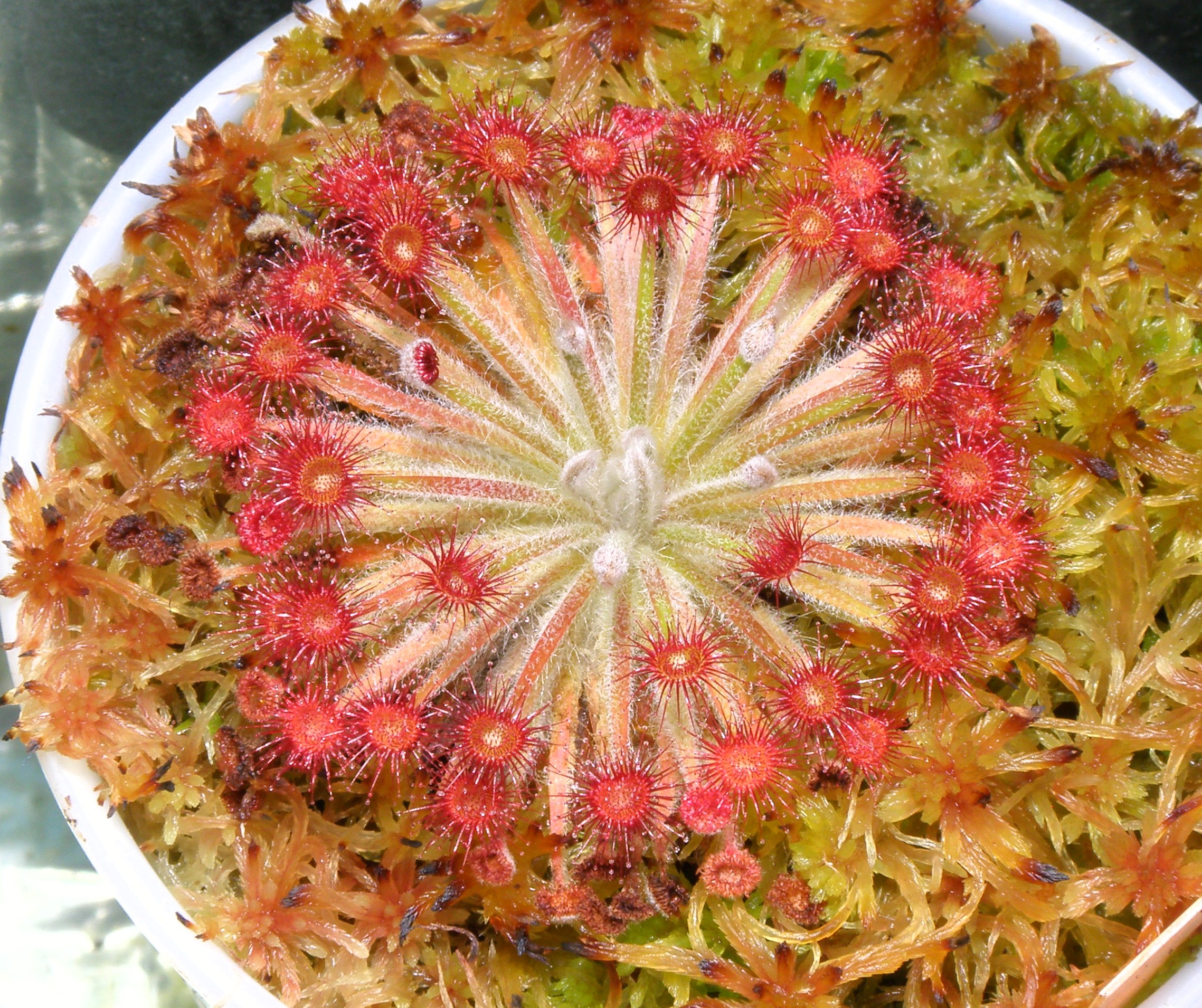 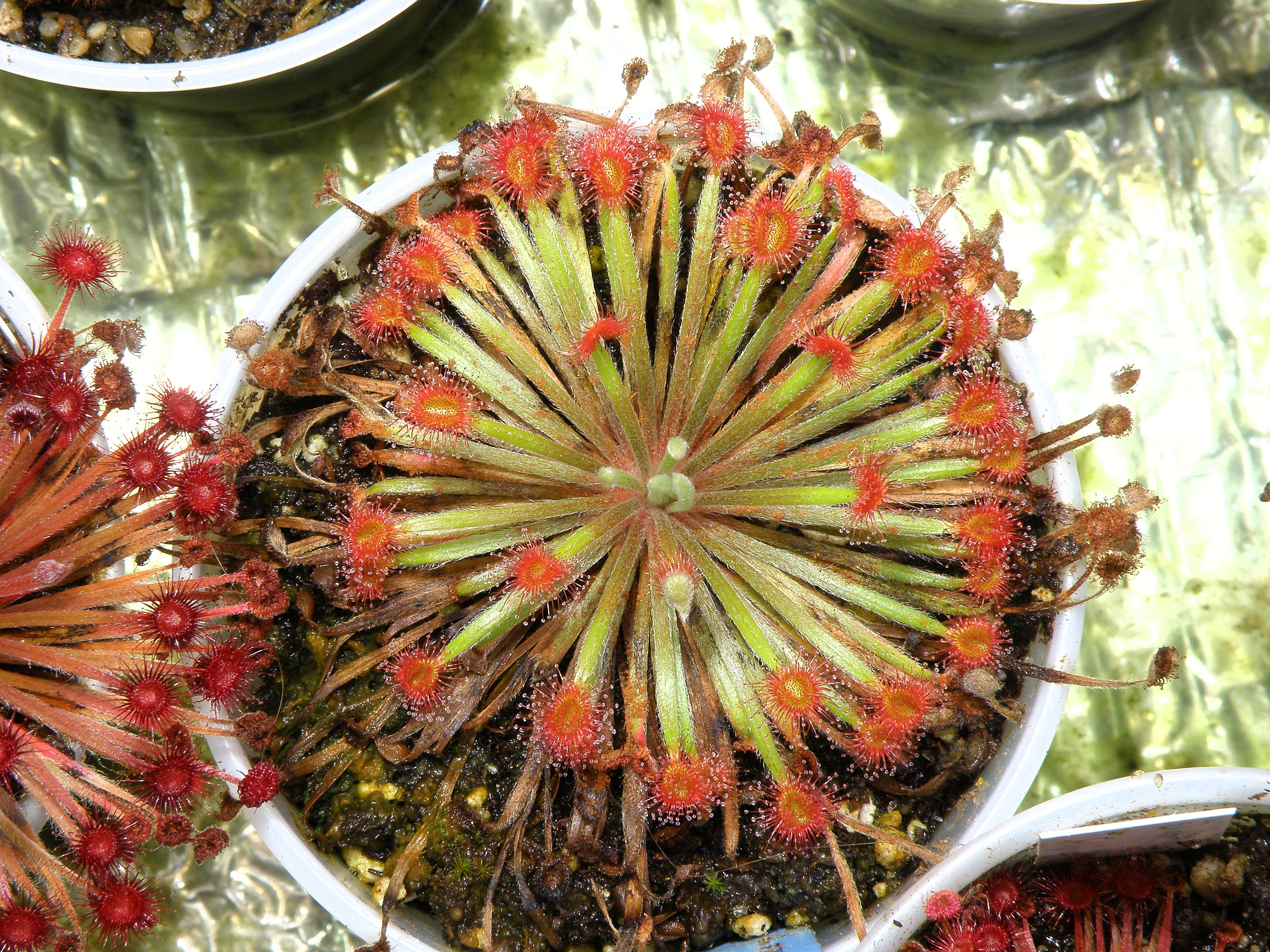 D. (ordensis x falconeri) x brevicornis The photo doesn't quite get the amazing color of the traps which is a bright orange/red. 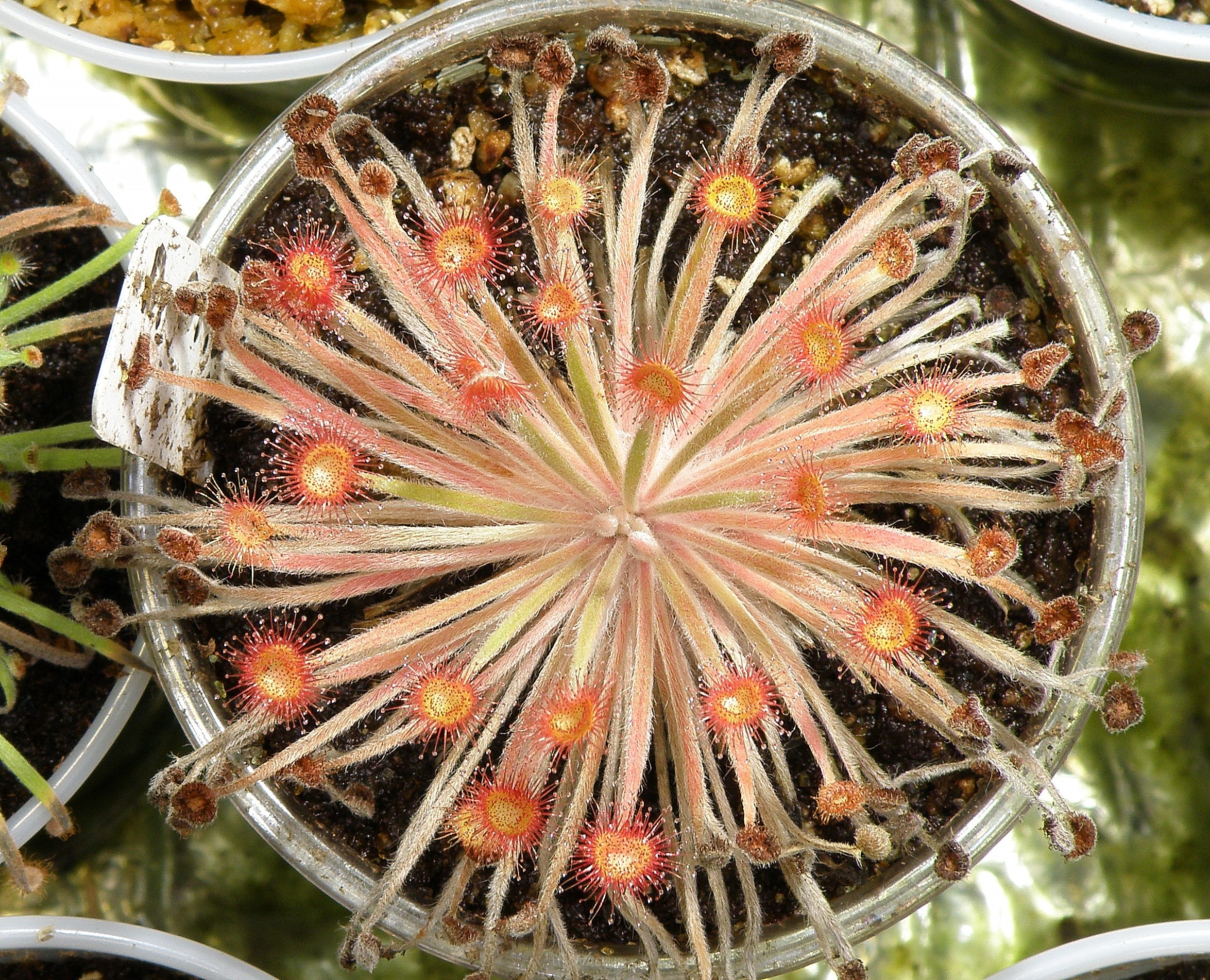 D. ordensis - one of many possible forms. This one's obviously on the mend.

Drosera lanata to trade for other petiolaris species.

N
Hey everyone - I want your honest feedback