Unlike most of the other nonfoolish holidays, the history of April Fool's Day, sometimes called All Fool's Day, is not totally clear. There really wasn't a "first April Fool's Day" that can be pinpointed on the calendar. Some believe it sort of evolved simultaneously in several cultures at the same time, from celebrations involving the first day of spring.

The closest point in time that can be identified as the beginning of this tradition was in 1582, in France. Prior to that year, the new year was celebrated for eight days, beginning on March 25. The celebration culminated on April 1. With the reform of the calendar under Charles IX, the Gregorian Calendar was introduced, and New Year's Day was moved to January 1.

However, communications being what they were in the days when news traveled by foot, many people did not receive the news for several years. Others, the more obstinate crowd, refused to accept the new calendar and continued to celebrate the new year on April 1. These backward folk were labeled as "fools" by the general populace. They were subject to some ridicule, and were often sent on "fools errands" or were made the butt of other practical jokes.

This harassment evolved, over time, into a tradition of prank-playing on the first day of April. The tradition eventually spread to England and Scotland in the eighteenth century. It was later introduced to the American colonies of both the English and French. April Fool's Day thus developed into an international fun fest, so to speak, with different nationalities specializing in their own brand of humor at the expense of their friends and families.

In Scotland, for example, April Fool's Day is actually celebrated for two days. The second day is devoted to pranks involving the posterior region of the body. It is called Taily Day. The origin of the "kick me" sign can be traced to this observance.

Mexico's counterpart of April Fool's Day is actually observed on December 28. Originally, the day was a sad remembrance of the slaughter of the innocent children by King Herod. It eventually evolved into a lighter commemoration involving pranks and trickery.

Pranks performed on April Fool's Day range from the simple, (such as saying, "Your shoe's untied!), to the elaborate. Setting a roommate's alarm clock back an hour is a common gag. Whatever the prank, the trickster usually ends it by yelling to his victim, "April Fool!"

Practical jokes are a common practice on April Fool's Day. Sometimes, elaborate practical jokes are played on friends or relatives that last the entire day. The news media even gets involved. For instance, a British short film once shown on April Fool's Day was a fairly detailed documentary about "spaghetti farmers" and how they harvest their crop from the spaghetti trees.

April Fool's Day is a "for-fun-only" observance. Nobody is expected to buy gifts or to take their "significant other" out to eat in a fancy restaurant. Nobody gets off work or school. It's simply a fun little holiday, but a holiday on which one must remain forever vigilant, for he may be the next April Fool!

On April 1, 1957 the British news show, Panorama, broadcast a segment about a bumper spaghetti harvest in southern Switzerland. The success of the crop was attributed to an unusually mild winter. The audience heard Richard Dimbleby, the show's highly respected anchor, discussing the details of the spaghetti crop as they watched a rural Swiss family pulling pasta off spaghetti trees and placing it into baskets. 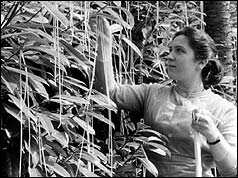 "The spaghetti harvest here in Switzerland is not, of course, carried out on anything like the tremendous scale of the Italian industry," Dimbleby informed the audience. "Many of you, I'm sure," he continued, "will have seen pictures of the vast spaghetti plantations in the Po valley. For the Swiss, however, it tends to be more of a family affair."

The narration then continued in a tone of absolute seriousness:

"Another reason why this may be a bumper year lies in the virtual disappearance of the spaghetti weevil, the tiny creature whose depradations have caused much concern in the past."

Dimbleby anticipated some questions viewers might have. For instance, why, if spaghetti grows on trees, does it always come in uniform lengths? The answer was that "this is the result of many years of patient endeavor by past breeders who succeeded in producing the perfect spaghetti." 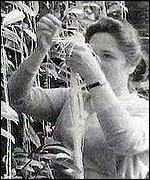 And apparently the life of a spaghetti farmer was not free of worries: "The last two weeks of March are an anxious time for the spaghetti farmer. There's always the chance of a late frost which, while not entirely ruining the crop, generally impairs the flavor and makes it difficult for him to obtain top prices in world markets."

But finally, Dimbleby assured the audience that, "For those who love this dish, there's nothing like real, home-grown spaghetti."

Of course, the broadcast was just an April Fool's Day joke. But soon after the broadcast ended, the BBC began to receive hundreds of calls from puzzled viewers. Did spaghetti really grow on trees, they wanted to know. Others were eager to learn how they could grow their own spaghetti tree. To this the BBC reportedly replied that they should "place a sprig of spaghetti in a tin of tomato sauce and hope for the best."

To be fair to the viewers, spaghetti was not a widely eaten food in Britain during the 1950s and was considered by many to be very exotic. Its origin must have been a real mystery to most people. Even Sir Ian Jacob, the BBC's director general, later admitted that he had to run to a reference book to check on where spaghetti came from after watching the show.

The prestige of the Panorama show itself, and the general trust that was still placed in the medium of television, also lent the claim credibility. The idea for the segment was dreamed up by one of the Panorama cameramen, Charles de Jaeger. He later said that the idea occurred to him when he remembered one of his grade-school teachers chiding him for being "so stupid he would believe spaghetti grew on trees."

I know none of us would fall for anything that obvious.

Check out the top 100 greastest April Fools jokes. Believe it or not the giant D.capensis is not on the list.

That reminds me of one of my favorite old commercials...the San Gorgio sphagetti harvest. It showed an orchard with trees dripping with sphagetti as workers "picked" it and laid it in baskets...exactly like that photo shows. It was so well done, it took a second before you realized what you were seeing wasn't real. I loved it. I'm guessing now the commercial was a take-off on that old joke.

It would be fun to be able to pick fresh spaghetti out of an orchard.