I believe I have yet to post about my own pets here, so I decided it was time. I own 3 corn snakes currently, ages being at 4, 6, and 8 with the pics, respectively.
The first is my male, Starfire, a typical amelanistic (or albino) het for anerythrism. He was a rescue, a friend's cat brought him home after either someone irresponsibly released him or he escaped. He's a bit of a handful, very energetic and not very fond of the dogs who share our home. 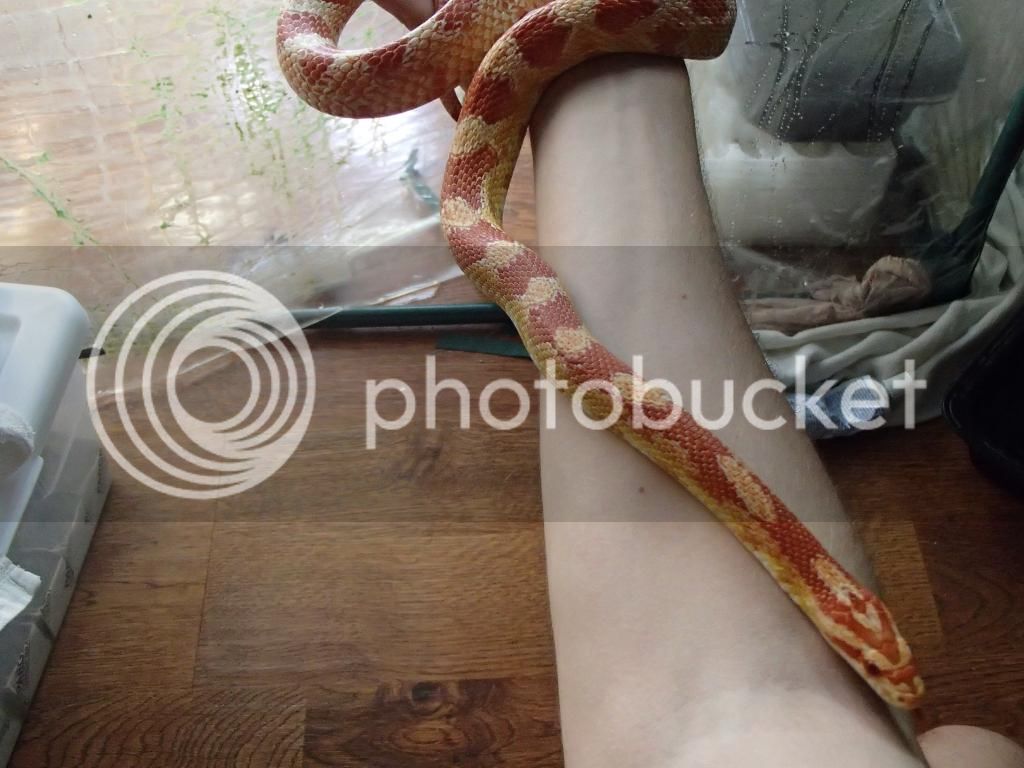 My younger female, Midnight, and anerythristic het for amelanism. She is the daughter of my first corn snake, a 5 1/2 foot snow corn named Frosty, who passed away 2 1/2 years ago at probably 13 years old. She has his personality though, for the most part, being very gentle and inquisitive. 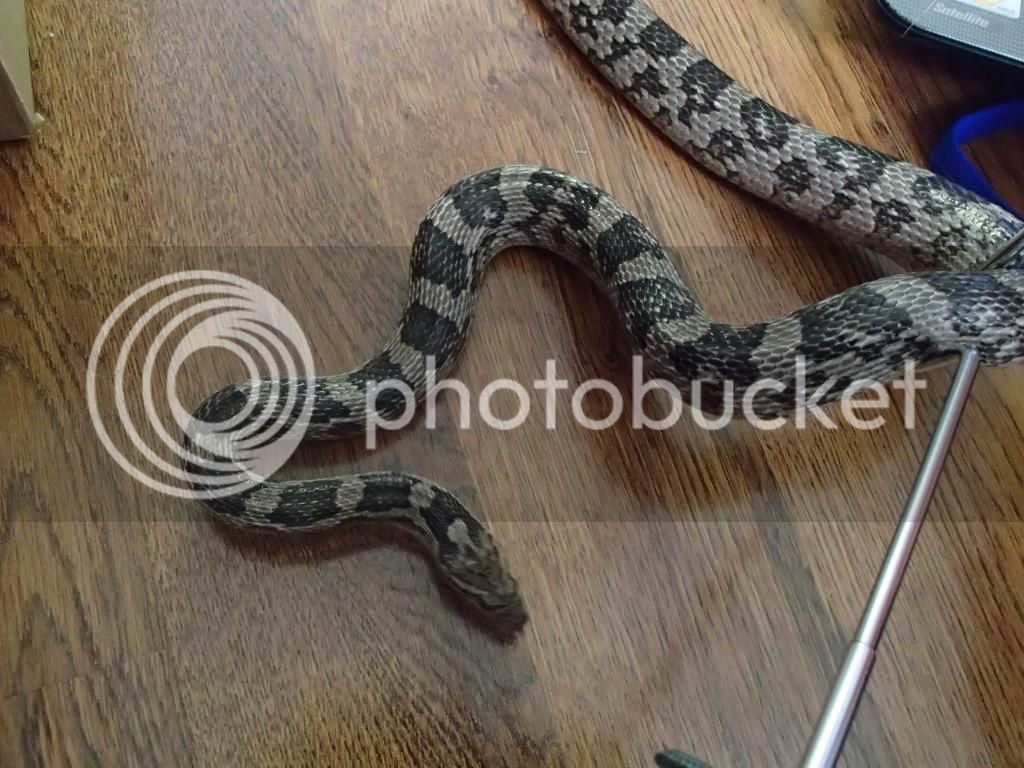 And lastly, my oldest female, an orange-phase Candycane corn named Candice. She's my mother's favorite, and has quite the sassy personality. Not mean, but extremely energetic most of the time and terribly curious 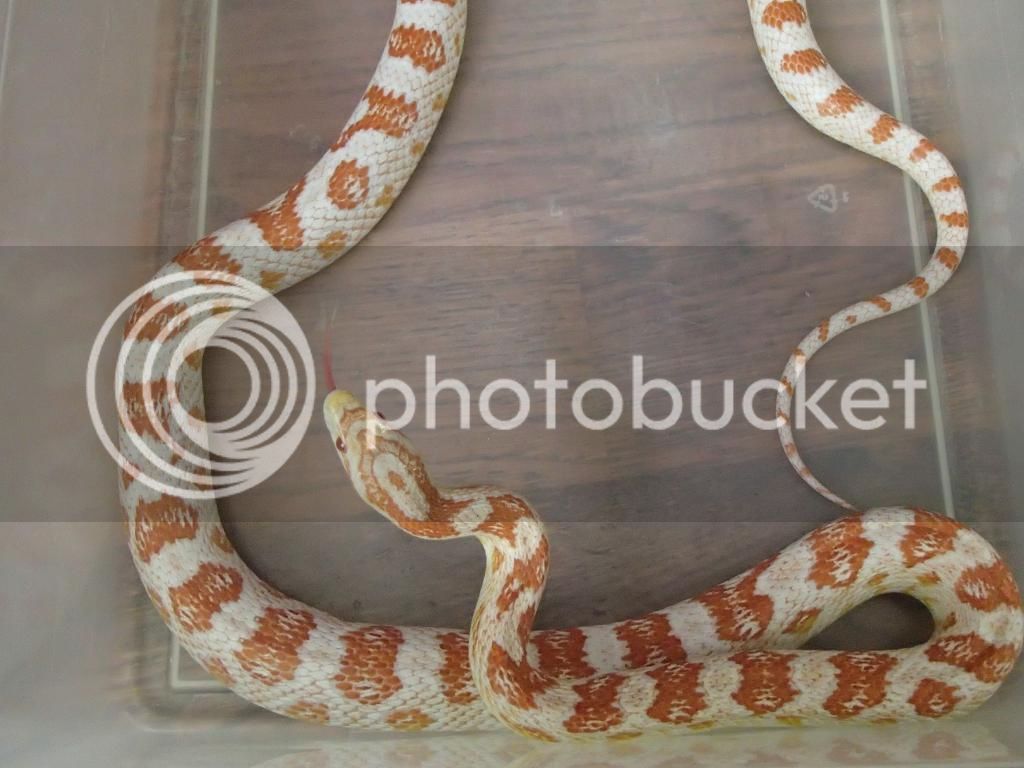 Though they are mainly pets, all three have been involved in breeding attempts as well, and hopefully I will be able to get babies from them again next year.
~hcarlton
Last edited: Jun 18, 2020
A

Lovely snakes! I had one almost 20 years ago, it was my first reptile pet!!

So, the snakes ended up breeding again this year, both females gravid.
Candice here was the first to show signs 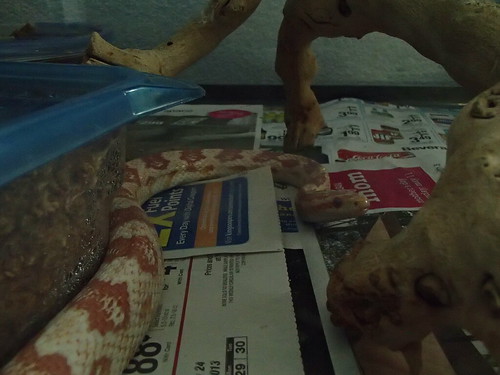 Candice by hawken.carlton, on Flickr
Midnight (here in one of their nest boxes) is currently preparing to exit the pre-natal shed cycle 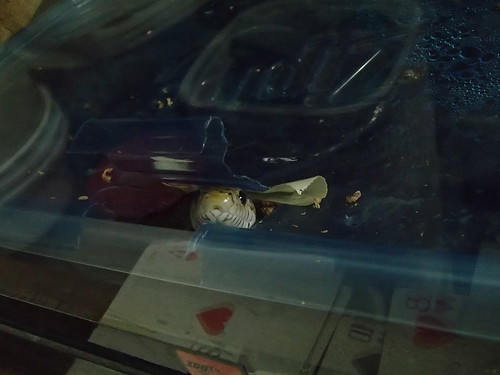 
But the biggest news: as of today, Candice laid 21 eggs, 20 of them appearing fertile. 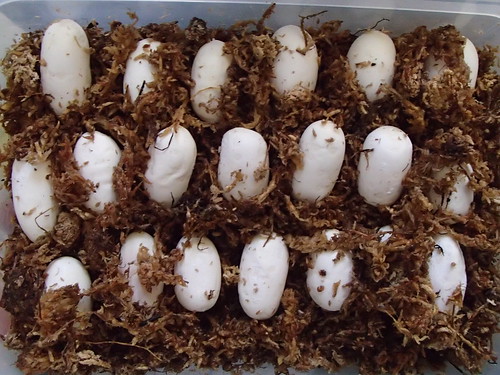 And the second female, Midnight, has laid her eggs! 15 in total, all appear fertile when candled. And they're on average around 25% larger than Candice's eggs 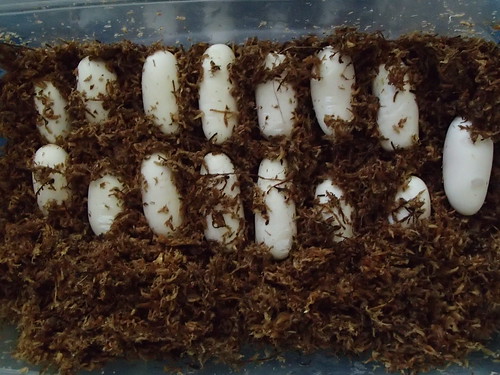 Congratulations on your many coming children!

Or, your many corning children.

There are 33 eggs that have proven fertile, and all are coming along well. Hopefully I should see the first clutch hatching around the first or second week of June.

Was taking a pic to prove a point to someone else, but decided it could go here too: me and my two girls 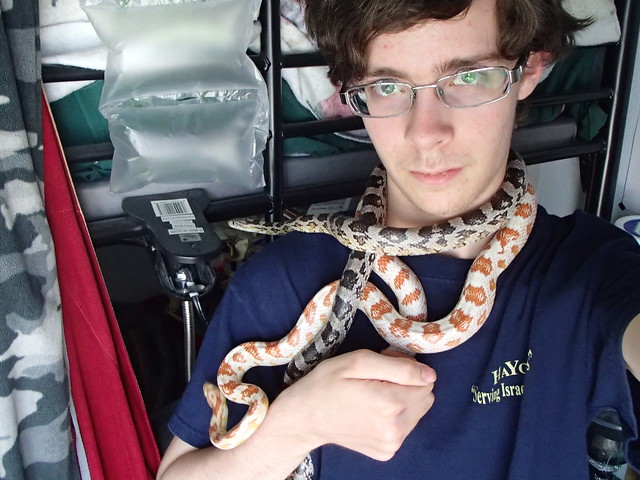 Me and the girls by Hawken Carlton, on Flickr

Stil probably a week at least before the first ones. And you wait for pics, but I wait for actual babies!! Far more exciting.....

Sounds like fun. I have 3 corns, some are morphs, but I'm uncertain (I think one is normal, another is hypo, and the last is a blood red?) All were cast offs. I don't breed them, but I am anxiously awaiting eggs from my female ball python who was paired with a piebald.

Dragoness: if you have pics, please share! I'm rusty when it comes to ball python morphs, but I might be able to confirm the corn morphs. Bloodreds are just a selective bred line of diffused gene.
Also, not sure if I mentioned this earlier in the thread, but my male was actually I theorize an escaped or cast out pet that a friend's cat dragged in one day. So he's also a rescue, as are my two dogs.

The first egg is hatching!! The baby has not yet exited the egg as of this posting, but has pipped, and it is an amelanistic with lots of orange.

The hatchling has left the egg. It is a female amelanistic, with a rather docile temper so far. The following pics are chronologic from the first sign of pipping to her fully out of the egg this morning 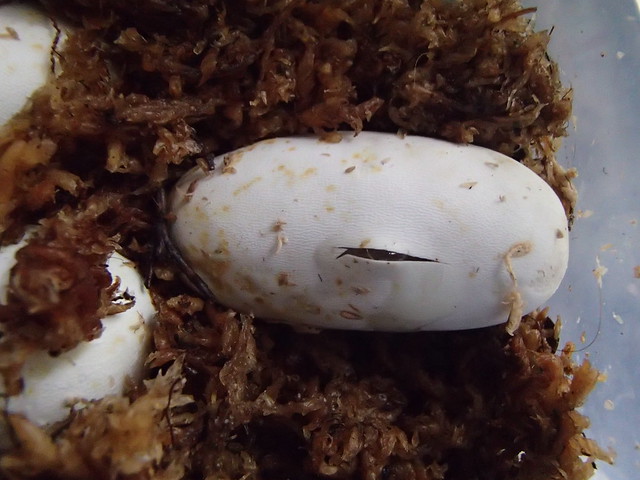 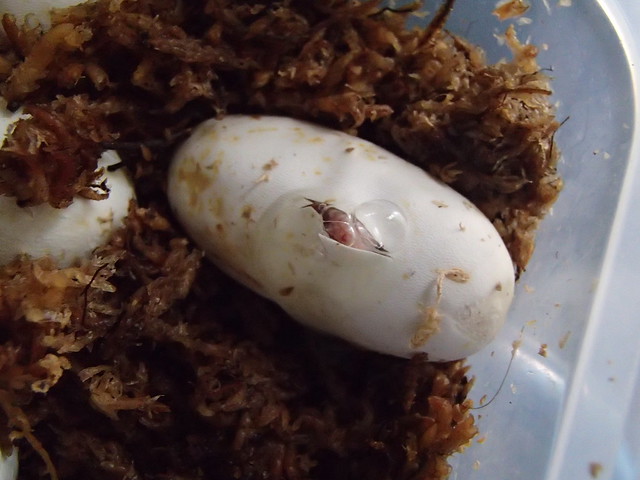 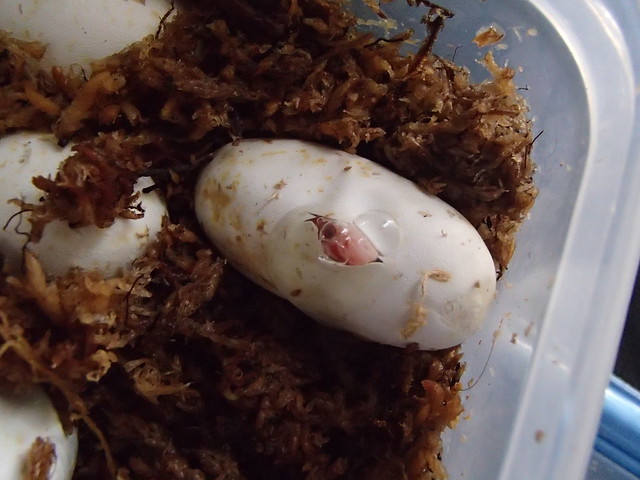 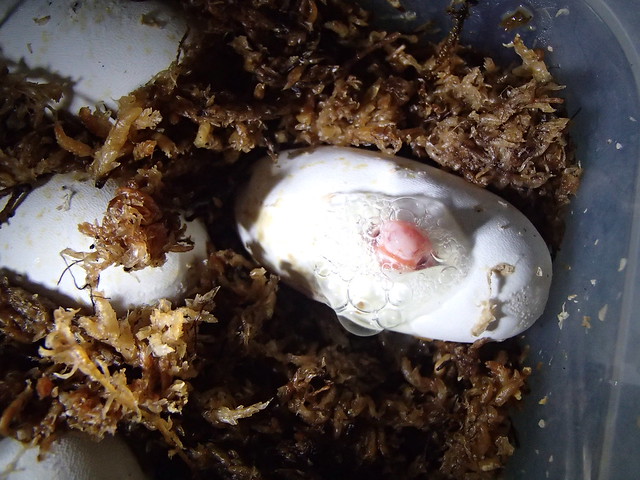 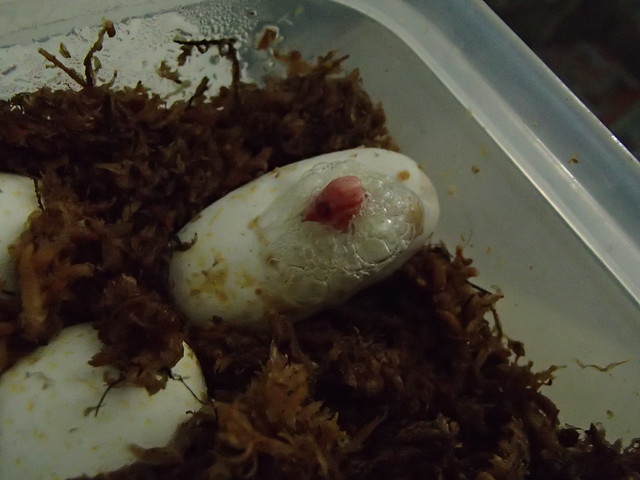 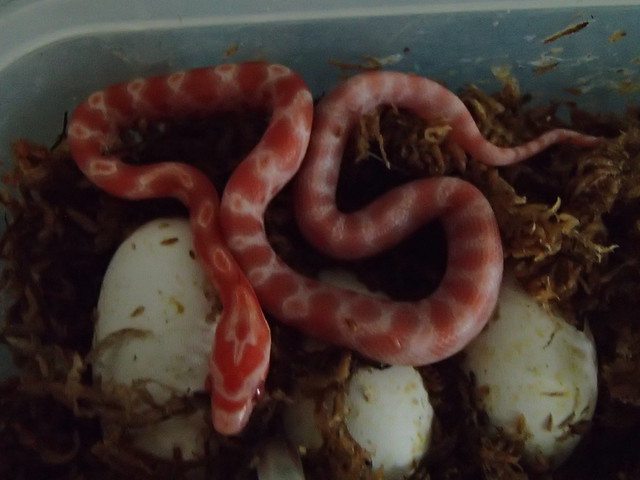 That's just awesome how you did sequential shots I was on the edge of my seat. Congrats, you're a father!

Correction: I'm a grandfather. I own the parents too

The second baby has also hatched out, pics of it will follow when the others hatch. There is one egg I am concerned about, as it started the typical deflating a few days ago and nothing has pipped yet...

Congrats! I can't wait to see the rest.
A

update update.
You must log in or register to reply here.

Now I don't mind spiders or snakes, but I may have some limits