It's always nice when your hobbies can support each other. Pictured below are one of my new honey bees (just started got them on 4/9, my first ones), and some VFT 'Red Dragon' that I recently ordered and I'm acclimating them in and area that isn't full sun all day. It also happens to be under a bird feeder, so that's the shells you might notice. Hoping this plant perks up and shows a little growth soon and I'll move it out into full daylight. 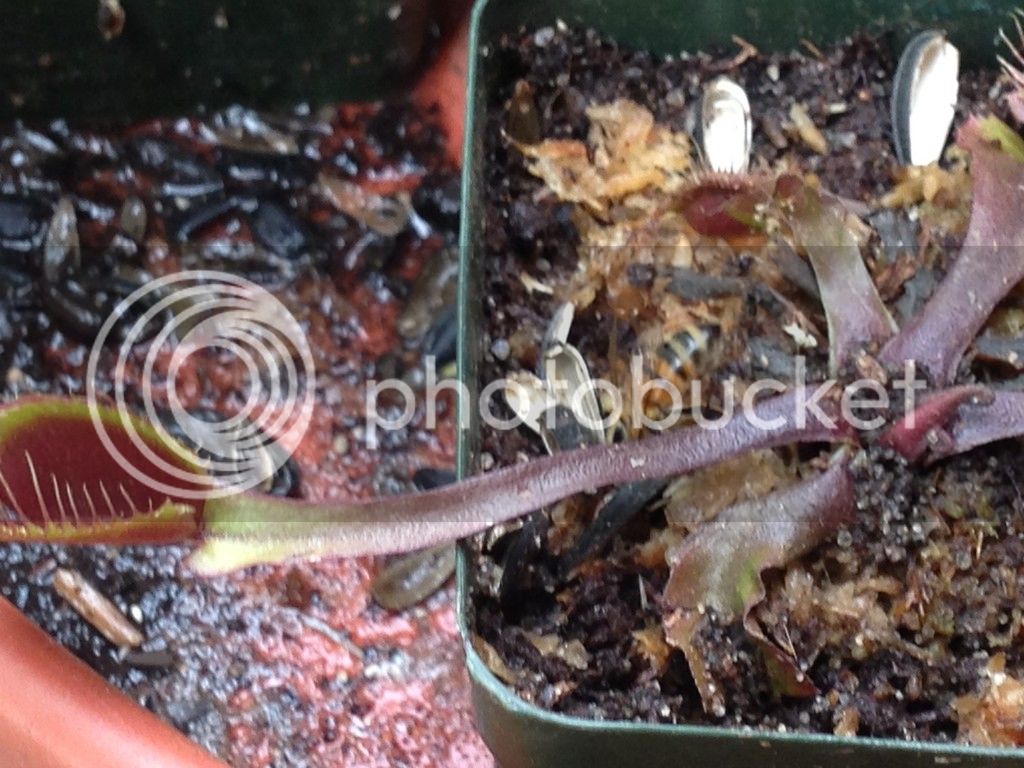 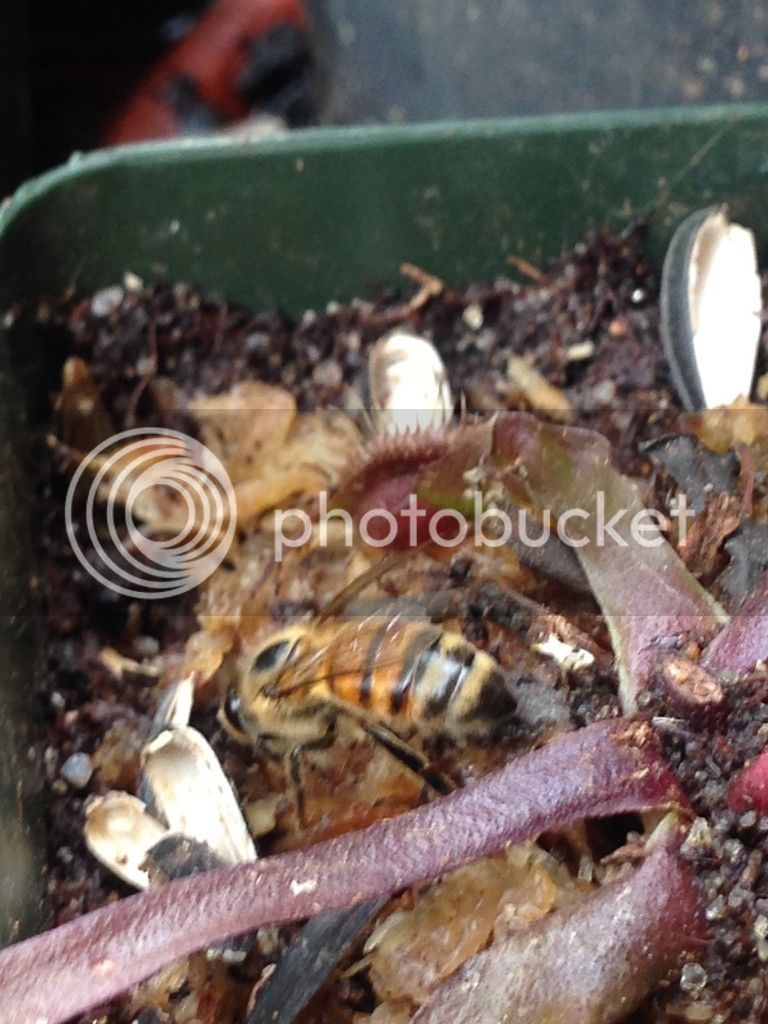 If you're keeping bees, expect to see this in the spring: 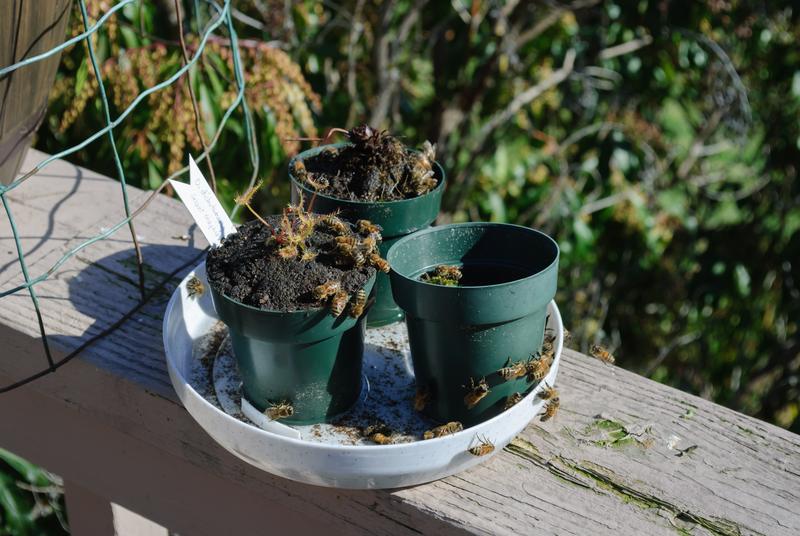 They love drinking out of water trays and wet peat. On cold spring days many of them will likely drown in the trays as well, since they won't have the energy to escape after falling in.

I'd much rather see bees than the swarms of paper wasps I get. At least I don't have to feel bad when the wasps drown, though.

I've just had the one bee find the tray so far. I'm sure she'll tell the others about it, though. I really don't know what to expect from them yet. I just got my first ever bees on 4/9/2016. They seem pretty docile. I've go Italian Honey Bees. They get a little stingy when I go into the hive or when I mow around them, but I can walk up in shorts and a tshirt to replace their sugar water. The smoke stops them from stinging my gloves at the hive, but I have trouble with my smoker. It keeps wanting to go out on me.

A few of them seem to follow me around. I was upstairs in the shop working on something and had one bouncing against the screen to get in. Then I went out to pot some of my CP's and it was staying out of the way, but it was checking stuff out like the cat or one of the dogs. I had another land on my shirt the other day for a short ride. They've been cool so far, but we'll see how it goes.

I figure there is a chance I'll loose some to my CP's, but I hope it's not too many. So far they've caused less trouble than the other animals. I was taking pictures of my new orchids so I could post them for some advice and my cat tried to bite a chunk out of my little Dendrobium Unicum. I managed to snatch it away at the last second and threatened him with a squirt bottle.

I'll tell you what's bothering my CP's more than the bees, though, is squirrels. I think the squirrels are looking in the pots to see if there are any seeds in there and they've tipped over several plant as well as one of my CP's. I think it's about to be open season on squirrels at my house. Also, I'm probably going to fire my Jack Russell for incompetence.
Last edited: Apr 20, 2016

If you have. Jack Russel, I'm surprised you have all the squirrels running around.

Could try putting pebbles or rocks in the water tray so the bees that fall in can climb out of the water.

It's not just peat that they like, I've noticed them drinking from the lfs in my pots.

Yeah bees will get water from anywhere they can. I've only ever had large numbers of bees on my plants in early spring though (that picture I posted was actually taken in February last year.)

Your plants will definitely eat some bees, but it won't be enough to impact the hive.
Last edited: Apr 20, 2016

DragonsEye, I've just had the one bee on mine so far. There are plenty of other water sources for them. If I notice any drowning, I'll just put a piece of porch screen in there so they can climb out.

Bees are so cool! very neat pictures. With all the fruit AG were I live theres so many bees this time a year. In my yard theres a bush that flowers and lures them in by the dozens. Sometimes also if I leave my garage open (which I do a lot to vent the A/C) I'll see a couple trying to get into my HL chamber. I assume they are trying to get in because they smell nectar?

Is there a way to tell "wild" bees from kept bees? sometimes I do feed my neps bees if I catch a random one near the chamber, but maybe I shouldn't if they belong to someone.
Last edited: Apr 20, 2016

Flip_Side_the_Pint said:
Is there a way to tell "wild" bees from kept bees? sometimes I do feed my neps bees if I catch a random one near the chamber, but maybe I shouldn't if they belong to someone.
Click to expand...

They belong to the rest of us. Without bees we all starve. Shame on you.

nimbulan said:
If you're keeping bees, expect to see this in the spring:

fredg said:
They belong to the rest of us. Without bees we all starve. Shame on you.
Click to expand...

I agree. Bees already have it hard enough as it is.

I'm sure the literary 2-3 bees a year I have fed to HL neps plants is going to MUCH less damage to the bee population then those of you growing your Sarracenia and fly traps out in your yards...

But i'll stop if its truly an issue
You must log in or register to reply here.