Here are photos of two different forms I grow and a hybrid I recently made between the two. One popularly called Long Arm from Tates’ Hell Swamp Florida is similar in leaf shape to D. intermedia. The other is a flat rosette which looks confusingly like spatulate, from Jackson County Mississippi. Grows great in these nifty microbog capsules; my own invention. Like it? 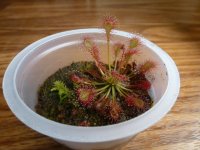 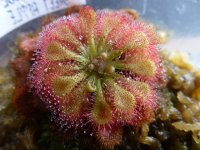 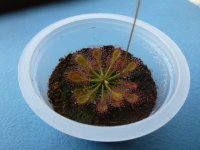 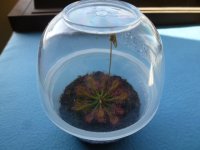 Those look very nice. I'm totally a fan of D. capillaris. One of my favorite aspects of growing Drosera is that it can be done in very small spaces but still have lots of visual impact.
F 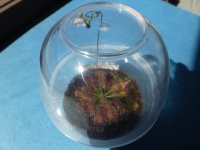 Thanks @bluemax. My precious hybrid is flowering now. Note the flower has completely opened inside the closed container. This is a trait I was hoping for. The Long Arm parent flowers do not open so well in these conditions.

My friend Robert Gibson reminded me to bring this up: He asked if I believe my hybrid will produce seed. The seed of both parents are identical to capillaris, but it is possible the the flat rosette plant could be something undescribed. Robert and I described D. spatulata var. gympiensis after crossing with typical Australian spatulata. The two proved perfectly interfertile.

Good luck on having fertility. 'Sounds like a very likely thing being as you haven't (probably) stepped across any lines between species. I've never been clear about the long-arm form of D. capillaris. I know some have accepted it as a hybrid while others have felt it was just a variant within the species.
F

If it follows the same pattern that D. tokaiensis or anglica did in origin (and there was some evidence I recall that at least some populations are polyploid suggesting hybridogenic origin), not necessarily. Crosses of tokaiensis x spatulata are frequently partly fertile, so production of seeds doesn't necessarily rule out hybrid origin.
However I am more of the thought that the "long arm" form is more likely convergent on the same tactic some of the Australian spatulata are; same species as the smaller standard variants, but adapted to sometimes seasonal tendencies to produce longer leaves to avoid flooding the traps. Crossing with other localities just makes mixed locality forms of the species.
F

Thanks @hcarlton. A polyploid D. capillaris complex which includes hybrids with intermedia and maybe even spatulata? Right, capillaris is surely just a single extremely variable and adaptable species with varying forms for occupying differing niches. While visiting the Florida Panhandle I witnessed myself the great deal of variation there.

My hybrid update: It died back putting everything it had into flowering and seeding but is now coming back with the help of good feeding. A friend recently sent me the pictured capillaris from Tyler County Texas. Looks pretty much the same as my hybrid. 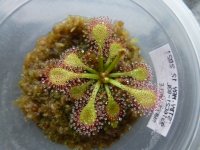 I never said anything about capillaris having spatulata involved in it; the two species are far too globally separated to even think that.
You must log in or register to reply here.

Reminiscenses of a Sarracenia grower