One of my unknowns finally flowerd.. Any ideas?

Could it be: D. dielsiana 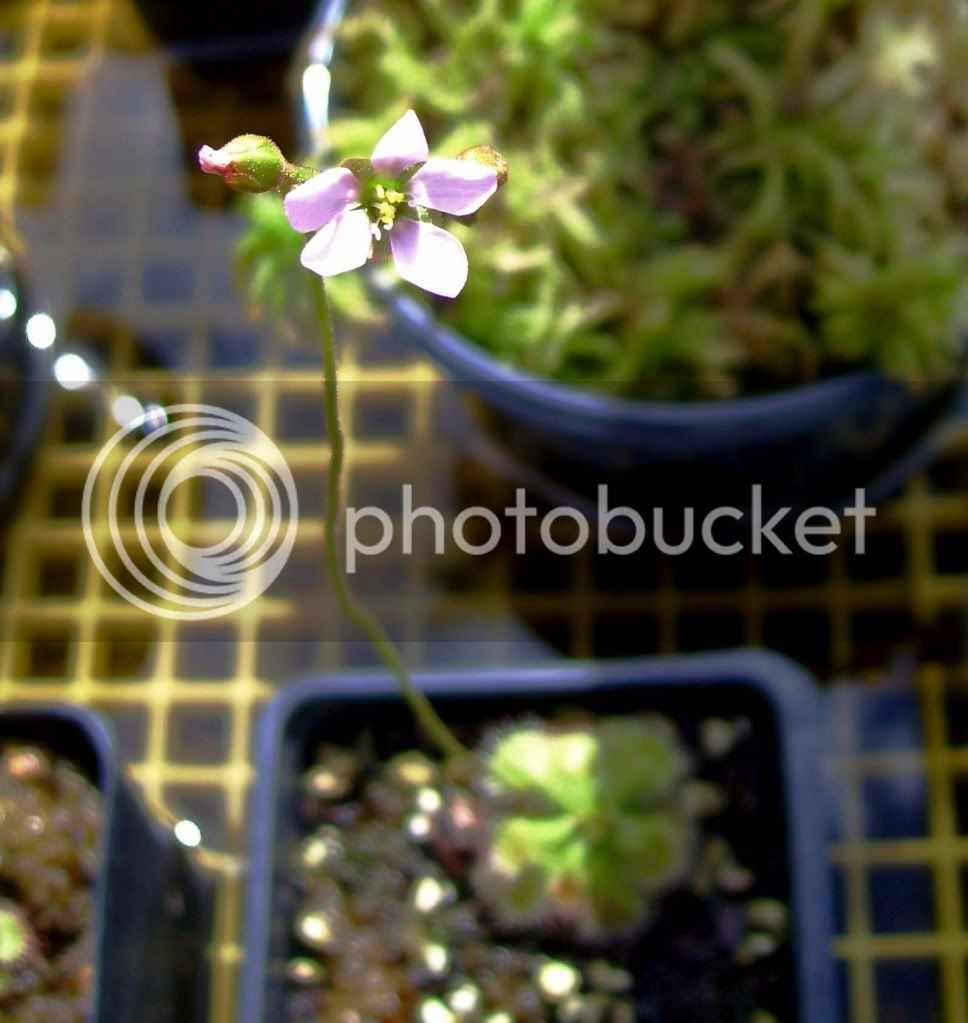 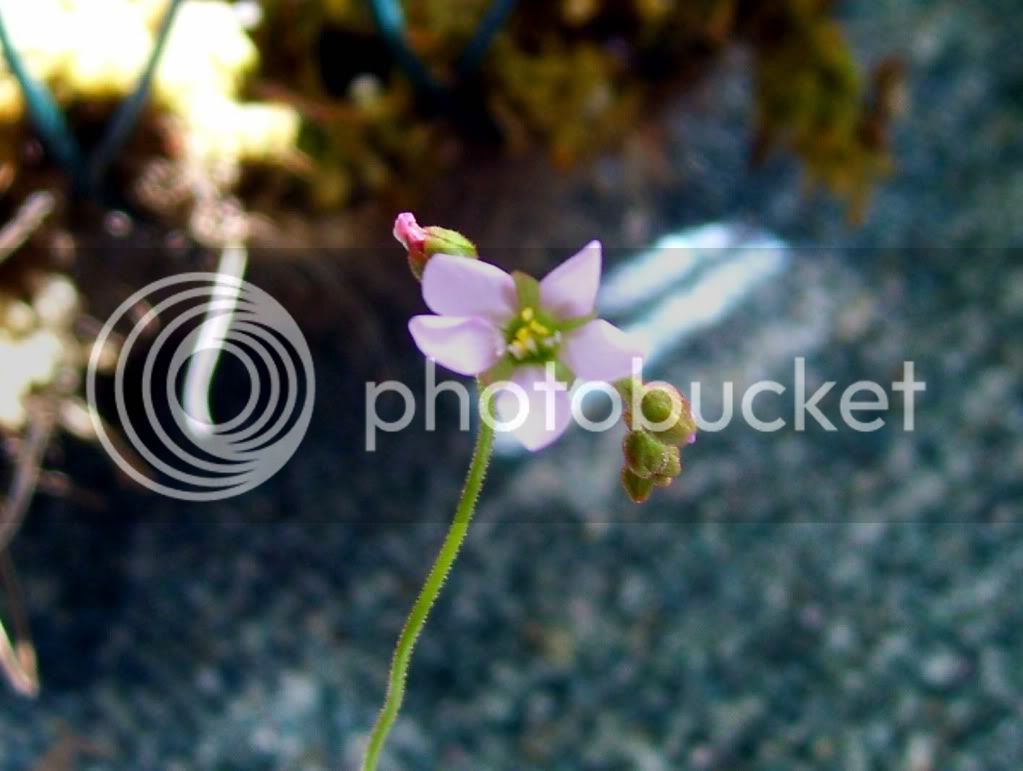 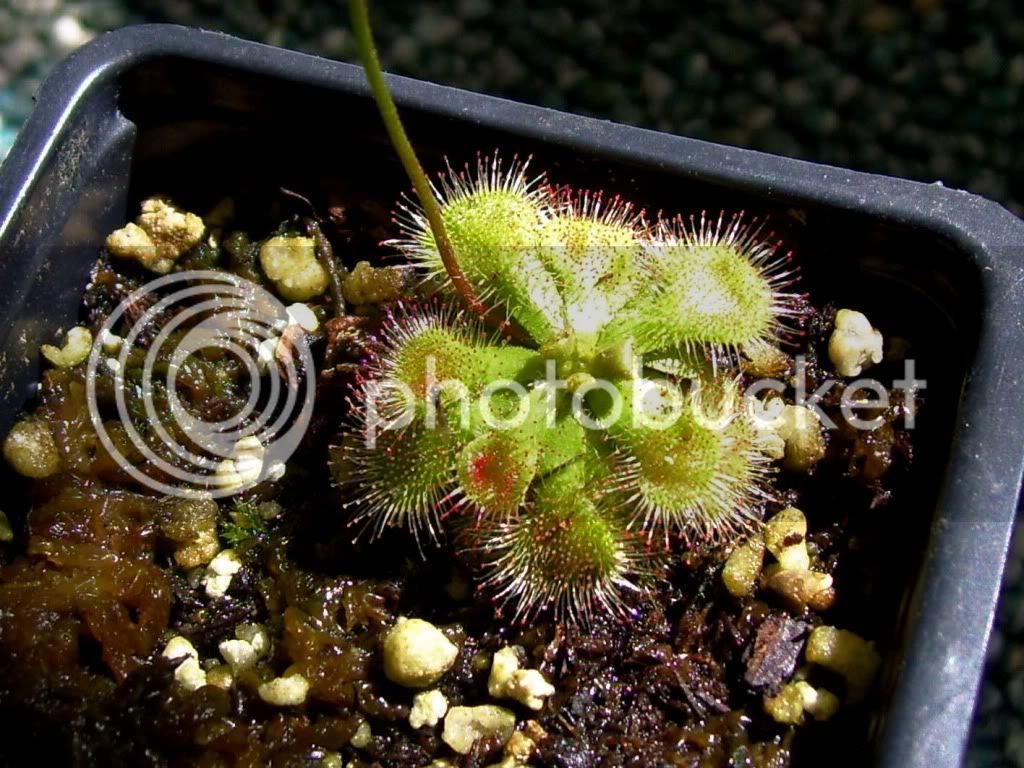 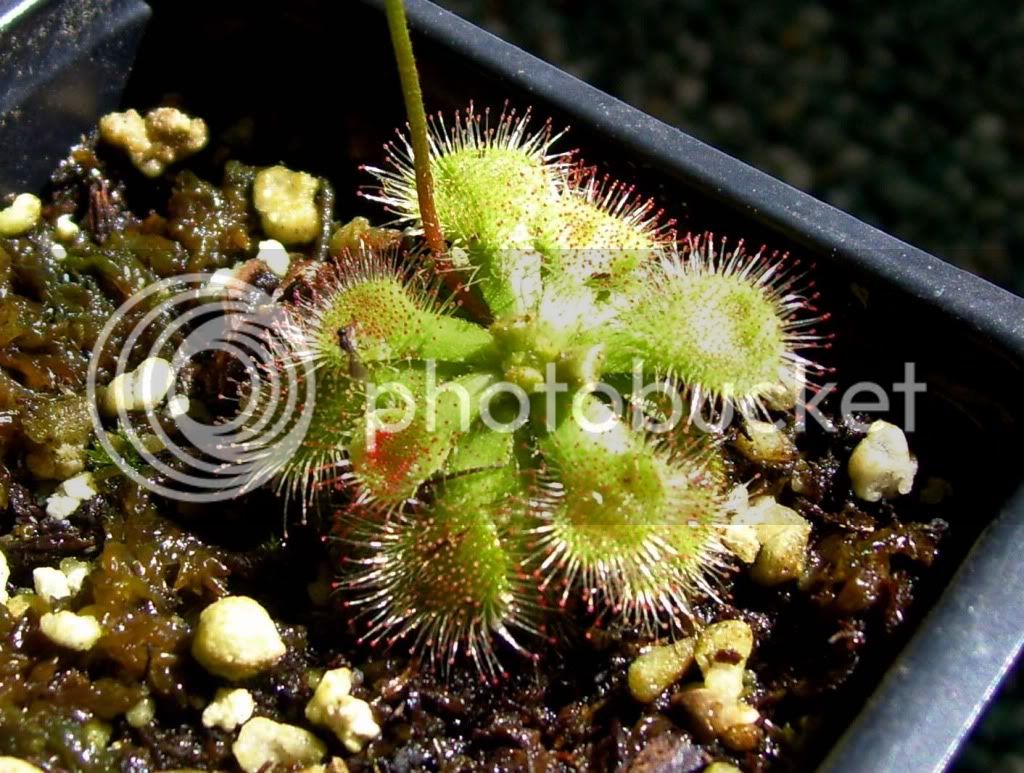 Nobody wants to take a stab at this one?
Think I'll stick with D. dielsiana then..

Hey thanks, now I feel smart.

Staff member
Supporter
Moderator
I'd wait until you get seeds before making any judgement. And as Tamlin has pointed out even that is not a sure thing.
T

Sorry I missed this post earlier since Drosera dielsiana is a topic of great interest to me. It was one of my very first Sundews from back in my childhood days. I got my seed from the ICPS seedbank, and grew and shared the seed with many people. Because of my long association with this form, I came to adopt this as the TRUE and typical Drosera dielsiana. Probably many commercial dealers also felt this way and also grew and distributed the same form. Now, decades later after some deeper research I believe that the plants from the ICPS seed (like in this example) were and are probably closer to D. natalensis based on small morphometric considerations concerning the flower, stipules and seed. Dr. Robert Gibson's line drawings of this species shows a much longer and narrower petiole (the loing part of the leaf before the trap). I trust Robert's assessments as he has had both field and herbarium experience with this species, while I am limited by the MANY such named examples I have grown over many years as my only comparative resource. Now that there is internet consensus via Bob Ziemer's CP photofinder there is a new 2 edged sword. If the greater number of photo's under a species listing there, logic might seem to suggest that this is the most likely determination but not necessarily since the availability and distribution of material dictates how many people grow and photograph such plants, so consensus based on comparative photography can create as much confusion as definition. Collectors are hung up on names. they want to know what they have, but you can see there are problems with variability, esp. in the SAF species not easily resolvable by simple observation.

When your plant flowers, details of the style divisions, seed form and length, and flower distribution on the pedicel will probably lead to a better idea of what this plant is NOT, even if not defining what is IS. This is an oft told tale with the SAF droserae.

Just for fun, here are several pics of my D. natalensis (which used to be labeled as D. dielsiana before I took a look at the seeds, and saw that they weren't round, but were more elongated, resembling D. natalensis more closely- but as Tamlin mentioned...it's a pretty confusing situation.

Either way, I just think it's funny how much the same clones can look so much different in varying conditions: 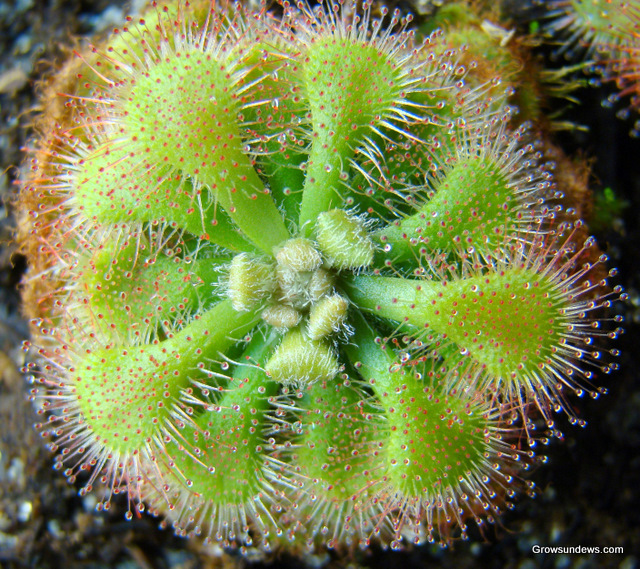 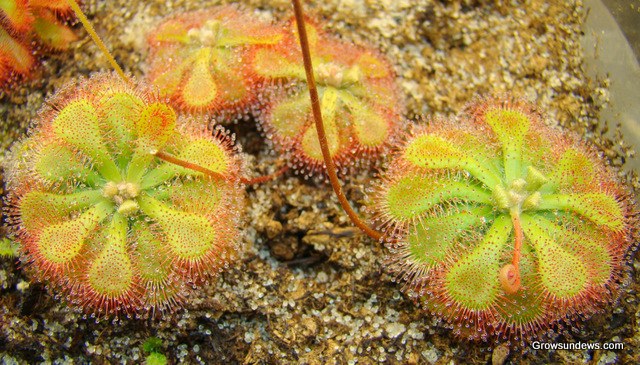 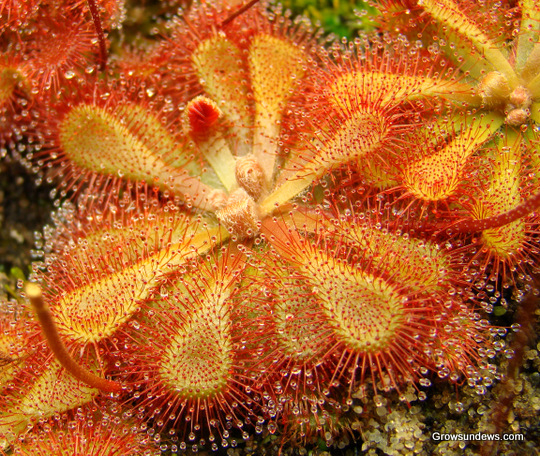 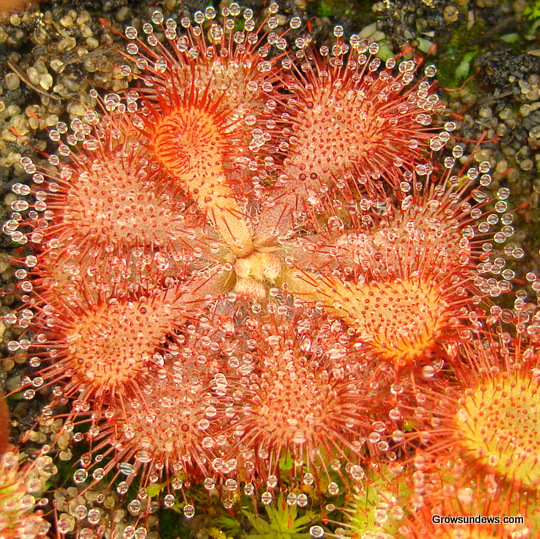 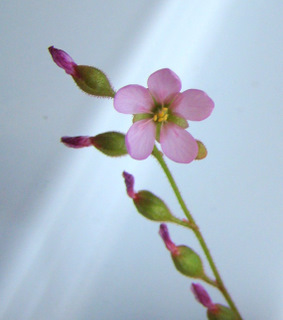 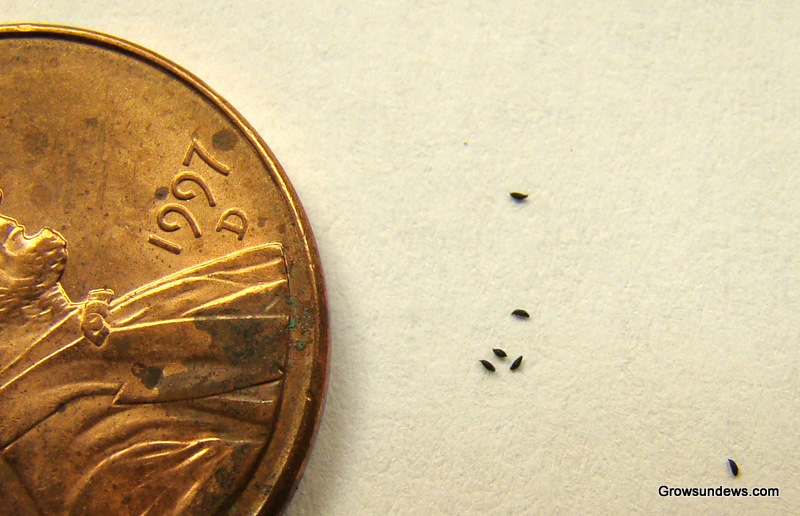 They look even more different now, but I haven't had time to upload the pics yet.
T

Better hold onto those name tags Aaron, don't assume old Tamlin has a handle on the Drosera dielsiana issue 'cause I DON'T. I think the ICPS was part of the confusion regarding the placement of so many forms like this as D. dielsiana in so many collections worldwide. I know there are good taxonomists associated with the ICPS but the material they distributed was from before the days of Dr. Schlauer, and I think if he found the D. dielsiana circulated by the ICPS had been in error for decades they would just let sleeping dogs lie. But, if it is as I think it's not too difficult a stretch to assume that many commercial growers also redistributed this form in good faith. I certainly trusted the ICPS seed and got plants like yours, with the shorter broad lamina, but this does not conform with Excell and Launders paper published in 1956 or as mentioned in another post, Dr. Gibsons line drawings. Anyways, this would account for why this form has such a wide distribution:

Is it an imposter? I believe it is but I am only an egg. You could try contacting Andreas Fleischmann for his opinion, he has a lot of experience with the SAF's, but does not care to discuss taxonomy with the likes of me. Maybe you'll have more success!

Digging deeper into the issue of this perplexing subject, I believe part of the problem with accurate determination is the importance of the flowers in making a determination. You see, the true D. dielsiana is virtually apmoictic (closed flowers) so if someone has a floral photo with an open flower it is already highly suspect! What is needed is for someone with a fairly good candidate to perform a dissection of the closed flower to confirm that the plant has the right stylistic divisions and then for a good photo of the seeds if the styles look right. This would be of great benefit to the CP community.

The seed itself should be ovoid as stated in the protolouge, but I also note Dr. Gibson described the seed as "shortly fusiform" (

!!!). I also read somewhere a statement that what he had once regarded as Drosera dielsiana was incorrect, but don't know if it was before or after his line drawings were published. I The seed testa is described as honeycombed and this is probably a better criteria than the seed shape or size. We must always keep in mind that "type" is a mythological concept that seldom evidences itself in individuals due to genetic variation and/or seasonal/cultural growth in its distribution and this includes seed length .

The issues of flowers and seed must be resolved before anyone will ever know if this species is in cultivation.

Alright, I'll still note the possibility of D. dielsiana then. Yeah, I just found this diagram from another forum (which sounds similar to the one you described), and it sort of helps, but as you said, due to variability, it is hard to tell even between 2 clones grown in different locations...

Staff member
Supporter
Moderator
I don't know about that Aaron, the descriptions by Dr. Roux in "Flora of South Africa" and Laudon in "Flora Zambesiaca" only mention hairs on the petiole not the lamina. Your plants are definitely pillose ("hairy") on the lamina.

None of the photographs of the flowers here show any amount of detail that would help.

The only photos I've found of D. dielsiana in situ so far are these from Zimbabwe which don't look much like any of the plants pictured above in this thread:

But then again conditions vary and many of the South Africans appear to be highly variable.

Anywho, how does one go about selecting "type" specimens? It seems to me one would look for plants that best represent the population as a whole. You wouldn't want the largest, most colorful or unusual specimen - you'd shoot for the average or median. Where as if you were collecting for cultivation (especially with $$$ in mind) you'd might want the most outstanding examples or "sports". There's a lot of artificial selection that goes on in cultivation.
Last edited: Sep 7, 2010

Warren- is there a link online to the articles you referred to that describe these species or are these exclusively in print?
So, if D. dielsiana is pillose exclusively on the petiole, then the picture on the ICPS D. dielsiana page is also really D. natalensis, then? It looks like hairs are also on the lamina in that picture.

Unfortunately, the picture was from a far distance away and the stigmas blend into the flower color too much. They look like narrow "V"'s attached to the tip of the style, if that helps at all....
Last edited: Sep 7, 2010

http://plants.jstor.org/flora/flosa001210177600019
Roux: Styles forked from the base with the stigmatic apex spoon-shaped, membranous.
Note: this is credited to A.A. Obermeyer on Omnisterra:
http://www.omnisterra.com/botany/cp/pictures/drosera/0075.htm#D.dielsiana
Click to expand...

http://plants.jstor.org/flora/fz3277
Laudon: styles 3, 2 mm. long, 2-partite to the base with spathulate apices
Click to expand...

Does the seed have a honeycomb texture on them? This doesn't appear to be present on the photo of the seed Mach posted nor on any of the seed I recently received.
Last edited: Sep 8, 2010

Thanks for the links!
my seeds don't have the honeycomb texture either...
T

As to the selection of type, here is another thorny question! You are correct, the type should be as typical as possible obviously, but the problem in the SAF species is their variability across their range and who can look at every plant in every population? Dr. Gibson cautioned me strongly not to place too much faith in this concept. Taxonomic opinion is only as good as the depth of the study and in SAF that would be very deep indeed. The hard part of observational taxonomy is the dependency on the protolouge publications, in this case Excell and Launders paper. That was back in 1956 and who now knows how deeply they studied the genus in SAF? This is why herbarium sheets are so important with their range data. More can be learned by assessing a large number of well identified individuals than from input gathered from any single type. I recall Drl Schlauer told me once D. dielsiana had the third largest distribution of any of the SAF species, so I would think there would be many herbarium sheets to compare, a long and tedious process! Hopefully the authors visited many different localities in their research, and their conclusions are sound.

Currently I have abandoned the whole species concept regarding SAF rosetted droserae and do not believe growers will ever be certain of what they are growing.
You must log in or register to reply here.

C
I just bought this fragile Drosera, help me resurrect it pls :D

Plant of the Month February 2021

F
Dawn of the Super Dew

Plant of the Month January 2021

Plant of the Month December 2020