Just bought my first plant on ebay. Im really excited to see this slow grower develop over the years! Native to South Africa, this species can get over 10 feet wide! WOW!

Here is my specimen: 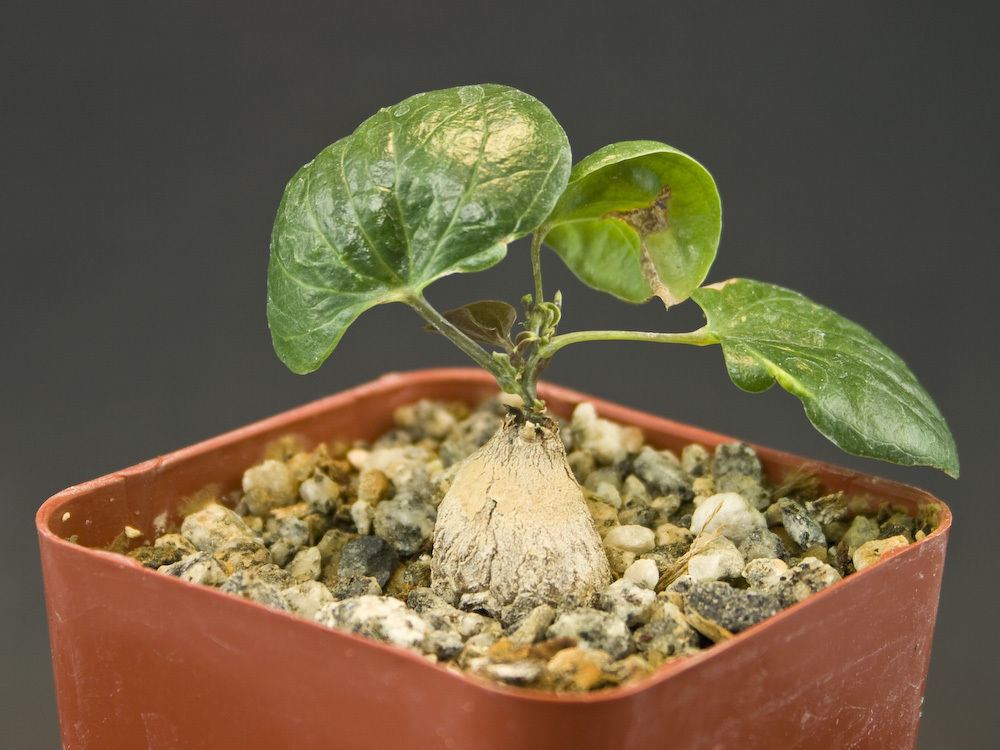 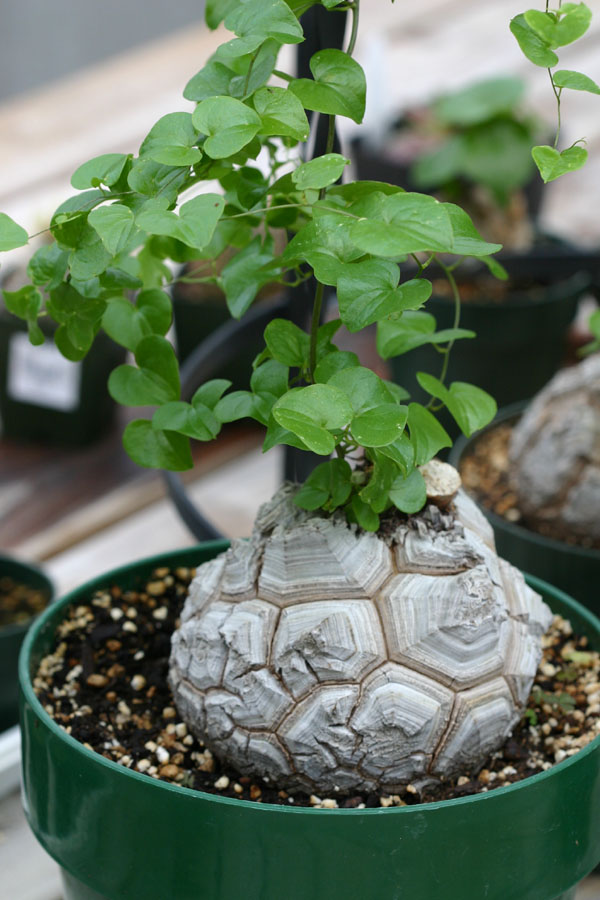 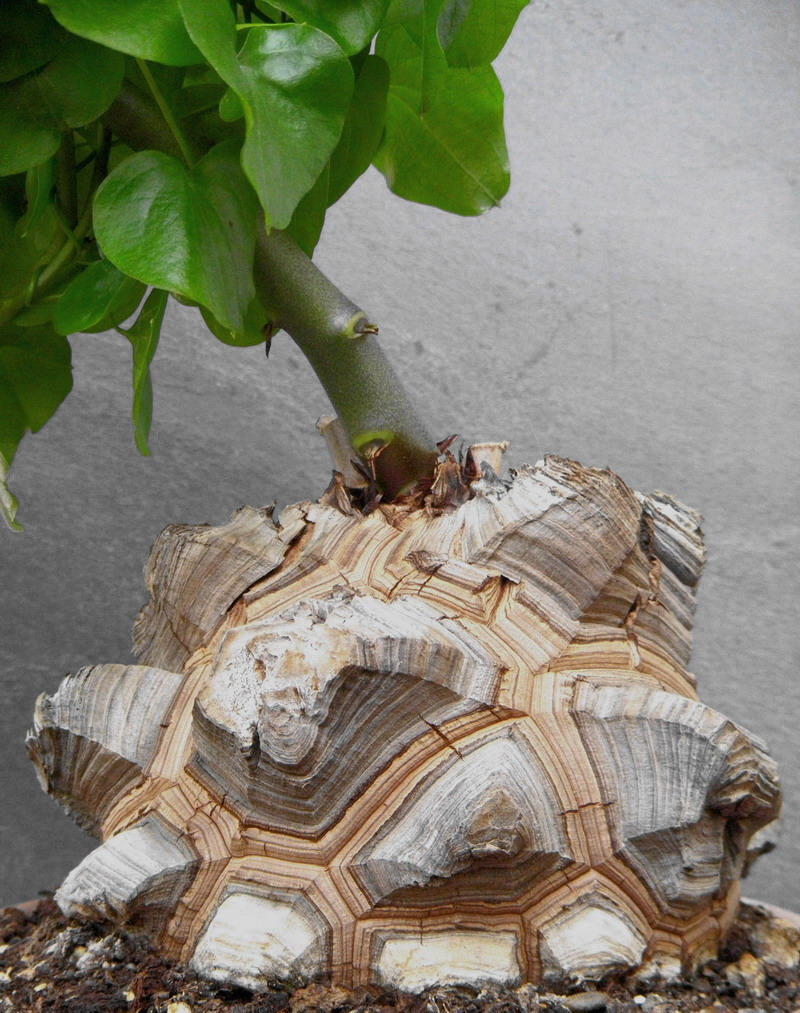 For some reason this makes me think of Katamari Domici...
S

What conditions does it need? Can it tolerate having a lot of water?

SFLguy said:
What conditions does it need? Can it tolerate having a lot of water?
Click to expand...

during growing season it requires "regular watering" but in its dormant season, it requires little water. It will rot if given too much. I plan on growing it in a shady part of my south window and treating it like the rest of my cacti and succulents. Its easy to grow from seed, its such a slow grower, I wanted to get a head start.

Great info page, and they sell specimens as well, but they are out of stock. I emailed them a few weeks back and they said to check in mid summer.
R

I have Dioscorea mexicana (= D. macrostachya), a single plant, and a bunch of seedlings of D. sylvatica. D. sylvatica seems to be a very variable species, and some forms adopt the "Turtle shell" appearance of D. mexicana and D. elephantipes. Some are more irregular. The seller of the D. sylvatica seeds (Seedhunt, plus Seedhunt's source, whom I know) claims that it is much faster growing than D. elephatipes and D. mexicana. I think they are right. I got quarter-size caudexes/tubers from seeds planted last June, smaller ones planted later (September?). I would strongly recommend this species (and this source) if anyone wants to try. Their seeds are cheap, they send more than they claim, and germination is quick and very high. The only drawback is that the caudexes might (?) end up more irregular shaped than the "classic" shape. I also have seedlings to trade, if anyone is interested, but honestly, the Seedhunt seeds are so phenomenal I would recommend them first. $4.50 for 50 plants, quickly, is not bad. Here's a link:

Here's a seedling of D. sylvatica, in November, that was started in June: 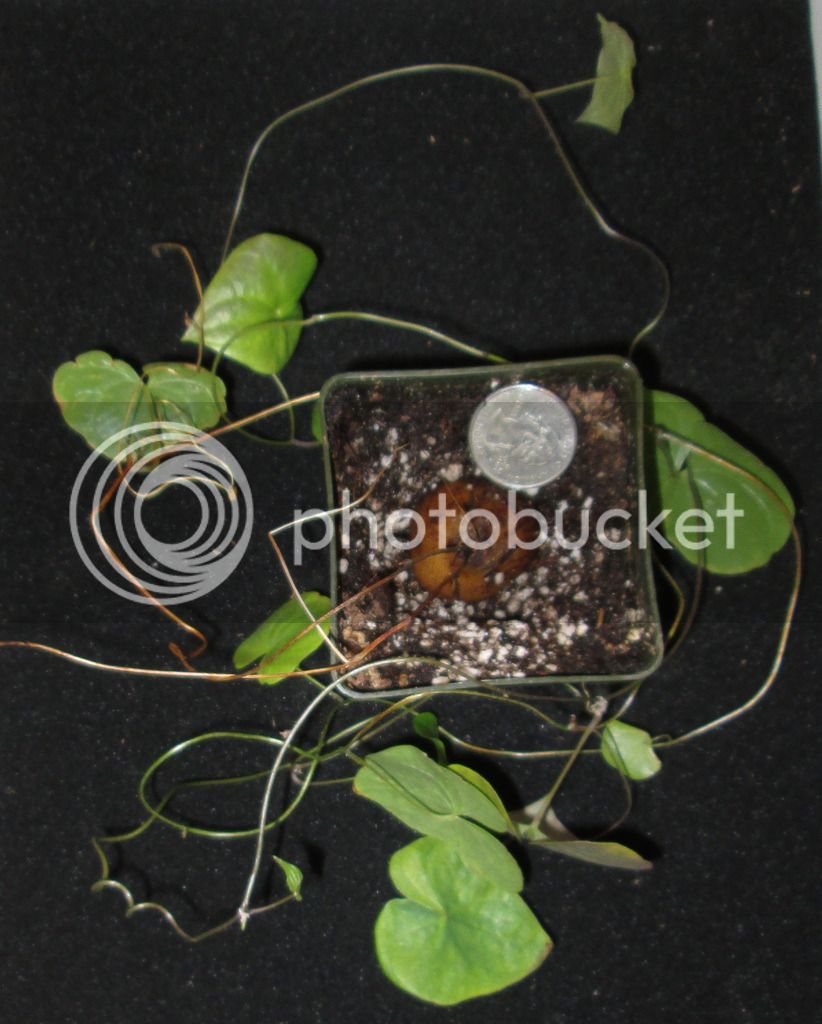 That said, I would still recommend D. elephantipes and D. mexicana if one wants to be sure to get the "tortoise shell" shape, as I don't know what this variety of D. sylvatica will end up looking like. However, they are expensive plants (my D. mexicana was an incredibly generous gift) and are slow growers.

I also once had a 6 inch caudex/tuber of D. mexicana stolen by squirrels when I lived in Los Angeles. It is a yam, and they decided it was food...
R

Here's my Dioscorea mexicana, tonight... I don't know if it's growing right now, because it's pretty dark. However, I suspect it's dormant at the moment. 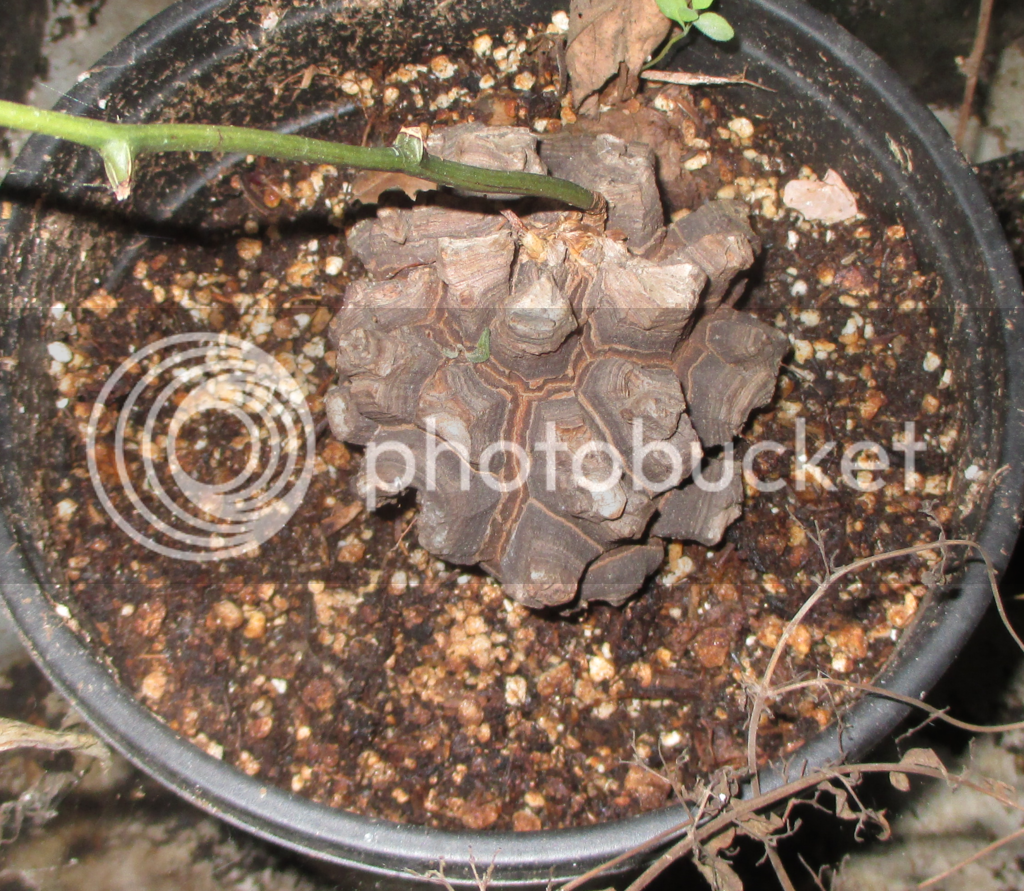 It's in a 6 inch pot. Did the tuber grow last year? That's not clear to me. It did send out some nice vegetative growth. I wish I could put it in the ground, as I think it would grow more quickly.

Great info Randy, thanks! Maybe ill pick up some D. Mexicana and D. sylvatica seeds to experiment. I definitely dont have room for a ton of plants, but Id be interested in germinating them, taking the strongest ones, and selling the other seedlings.

Do you think a very bright north window would suffice for this genus since they like shade? It gets strong evening sun and good light all day.
R

I don't have enough light from windows to grow anything inside with natural light, so I started seedlings under lights. I'm in the process of moving pretty much all of these into individual pots (if not already) and outside. I don't have full sun anywhere outside. They still seem to go dormant inside at the appropriate time, even when grown under lights that are on 24/7. I don't know how they figure that out. My D. mexicana has been outside since I got it.

However, I'm pretty sure people grow these inside in sunny windows, and they grow well. I don't know how much in terms of less sunny windows they can take. I'm pretty sure Bihrmann used to grow all of his plants in windows. He has photos of his D.mexicana in a window, but I can't tell how much sun.

Here are some photos of D. mexicana seedlings: close to 100% germination, in a couple weeks. The second batch of seedlings: 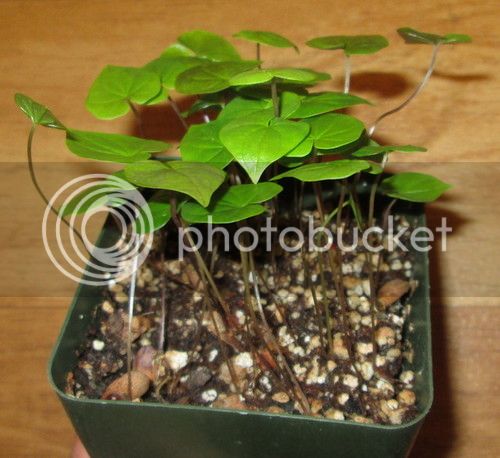 Once they started to vine I transplanted them. Here are some of the seedlings (unfortunately the photo is fairly low resolution):

Great info page, and they sell specimens as well, but they are out of stock. I emailed them a few weeks back and they said to check in mid summer.
Click to expand...

I just went through and (finally) gave the small number of my plants (Dioscorea sylvatica) that still needed them their own pots. I also moved everything outside. My current count is 25 plants, of which about 10 have emerged from dormancy. This is after giving away and selling a lot of plants. As far as I'm aware, my only losses were a couple tiny pots with 3 each of the smallest plants in them. I assume the death of a dormant plant, especially if the soil is at all moist, would lead to a rotten tuber/caudex. I'll know for sure which are the survivors after they all emerge from dormancy. Dormancy doesn't seem particularly synchronized in these plants.

An additional note: there are reports that Dioscorea mexicana but not D. elephantipes can be propagated from cuttings (and still grow a caudex, presumably). I tried last year with D. mexicana, and although some of the cuttings remained alive for a while, none rooted. Otherwise the plants need to be grown from seed, and as far as I'm aware the species mentioned here are all dioecious. So both a male and female plant is necessary.

I have a different kind of Dioscorea that vines- it commonly goes by "potato vine" here in the South, is a type of yam, and is considered an invasive species in Florida. Here in Texas, however, it dies back to the tuber during winter, so we do not have the problems with it overtaking brush like Florida does. I love it, it grows very fast and is useful in covering ugly trees and fence lines and such.
S

Oh yeah, we call it air potato, that thing is horrid, every time you remove it, it comes back from the tubers you missed, took three years to get rid of here
R

I have one that I bought from seed seller J.L. Hudson as Dioscorea batatas. It's edible, and I believe it's the same as one of the large (up to 3 ft.) elongated tubers found in a lot of markets in California. I don't remember what the name is in markets, but one common name is "Chinese Yam", also "Cinnamon Vine" due to the scent of its flowers. It's not supposed to be invasive here. I think the one that is the more common invasive East of the Rockies is Dioscorea bulbifera. Whether thiese are truly different, and whether everything is correctly named, I don't know.

They had 1 gallon pots of it for sale last week at the wonderful plant sale at Cabrillo College.

Here's an invasive plant description. It looks like it's also invasive in WA and OR, west of the Rockies:

Guys, the vendor I purchased mine from has a few on ebay now. I know there was some interest here and in other threads

I just happened to find one today at a plant festival, pretty excited haha
You must log in or register to reply here.