Hey guys,
Long time no see! So, I had originally planned to pull my VFTs out of my terrarium for their dormancy, but (and please correct me if I'm wrong) They seem to be starting their dormancy already. I'll post pics of the plant that is furthest along in what I think it's doing, later. I'll try to explain what I'm seeing now. Before now, this plant was producing very long leaves with large traps. I have been keeping my lamp on for as long as the sun was up, and turning it off when the sun set. The temperature in my terrarium has on average gotten about 10F cooler than it was during the summer. Now, the plant is producing A LOT of very short leaves with much smaller traps: about 1/2 to 1/4 inches. The other plants aren't quite like this yet, but they seem on the verge of following suit. Is this a sign that I don't need to pull them out for dormancy? I still do intend to re-pot the bigger ones in the spring.

Also, I'm wondering if it is a danger for my Drosera Floating to be in the same terrarium with these temperate plants. It seems to be quite healthy, just not as pink as it was before the days started getting shorter.

ANOTHER question. I'm in the midst of trying to decide which plant, if any, I should get to fill some of the empty space in the middle of the terrarium. the space is too short for most Sarracenia, I'm pretty sure. perhaps another rosetted Sundew or a small-ish variety of VFT? Maybe even a butterwort. Can't say I've ever been very excited about those, but P. Laueana is a particularly beautiful species and I'd dearly love to have a specimen.
Last edited: Oct 14, 2015
K

Well plants are usually tuned to dormancy with their light cues, and temp changes. The light cues (syncing with the winter/fall light hours) should be starting to get them ready to go dormant. As long as u dont cause them to break dormancy unexpectedly i think theyll start producing their fall/winter traps and leaves. Usually shorter more thicker leaves rosetted with smaller traps some that dont trigger. U can post a photo if youd like but i think their just getting ready as mine are at this time of the year. U may still want to move them to a place a bit more dormancy temp wise and keep their soil moist and watch out for freezing. Ive lost VFTs last year by a window being left open and a cold frost moved in freezing the pots dry! They never came back even when soaked in distilled water after things were back to the way they were supposed to be.

This is a picture of what's happening with the plant in question.

That looks like its rhizome is splitting.. If u dig it up I'm sure you'll see its either split off into more plants or about too

This happens to mine alot, but it could be the main plant is becoming dormant as the new splits are just growing.. U may wanna separate the younger offsets and keep them from dormancy till they get bigger next year and allow the mother plant to go dormant, but that's up to you. I usually hold off on dormancy on younger VFTs cause i worry about rot or them not coming back next year.
T

My terrarium is actually in excellent shape: I haven't had any problems with mold or rot, or anything, as yet. All plants, including the tiniest ones (about the size of a penny) have flourished under my new light-bulb. Spores from the long-fiber moss I got with my last plant purchase from Predatory Plants have been growing, slowly but surely on top of the soil and I can't wait for most everything to be covered in green, thought it will probably be quite a while.

I will be able to take a look at the rhizome once my plants start coming out of dormancy and I put the larger ones in their own separate pots.

In any case, whether the rhizome is splitting is irrelevant to the issue I'm trying to figure out. Notice the difference in length and number of leaves compared to the older leaves. The older leaves have ends that are outside of the picture's frame, except for a couple that I've cut, due to blackening. The new leaves are all quite short, albeit still quite healthy-looking. If the rhizome is splitting, is that a reason for the main plant to stop sending out its usual leaves? As I said before, I just want to confirm whether or not this is a sign that things are going well at this stage in the plant's life; that the plant is actually preparing for dormancy, so I can determine the next step to take.
Last edited: Oct 15, 2015
K

These are my plants and this is what ive noticed.. 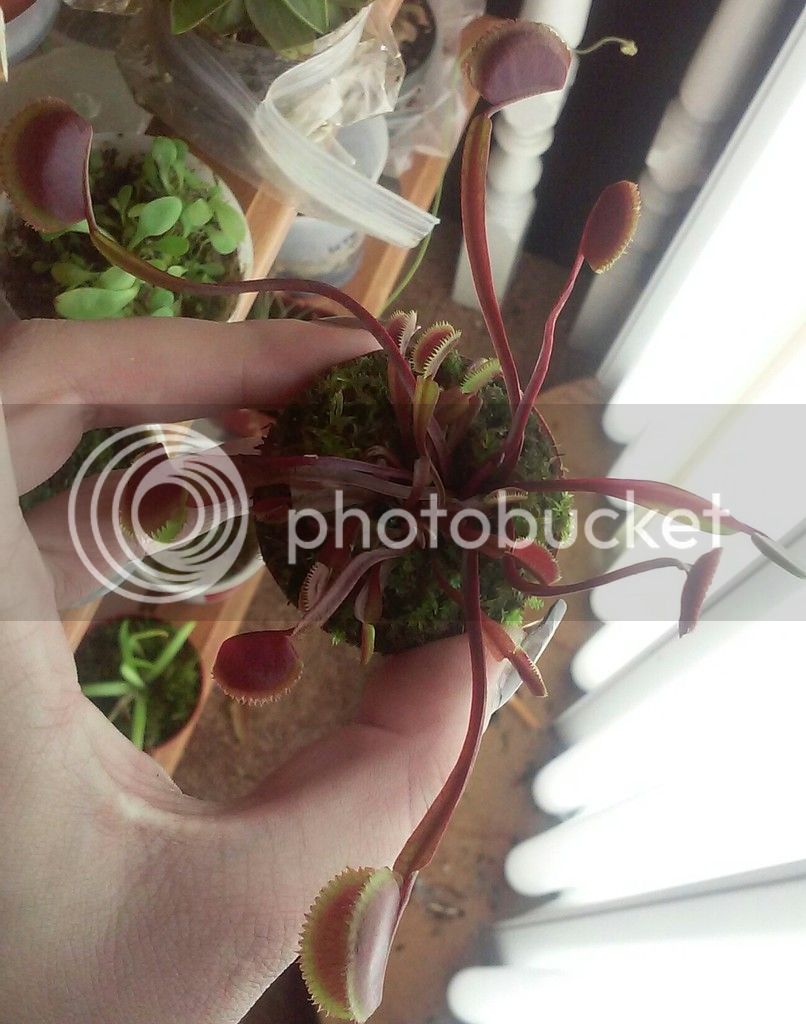 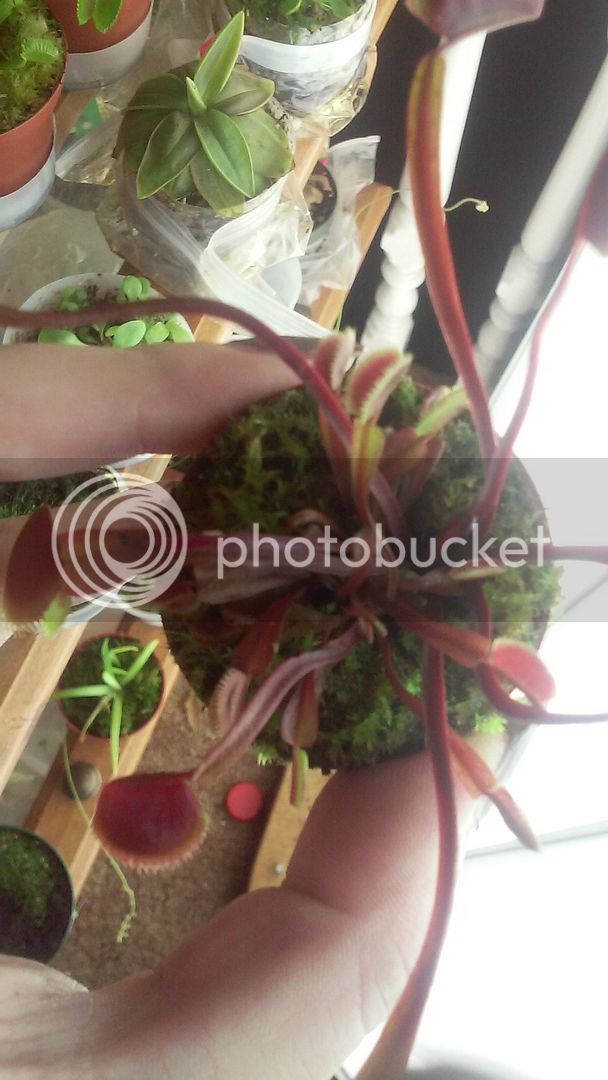 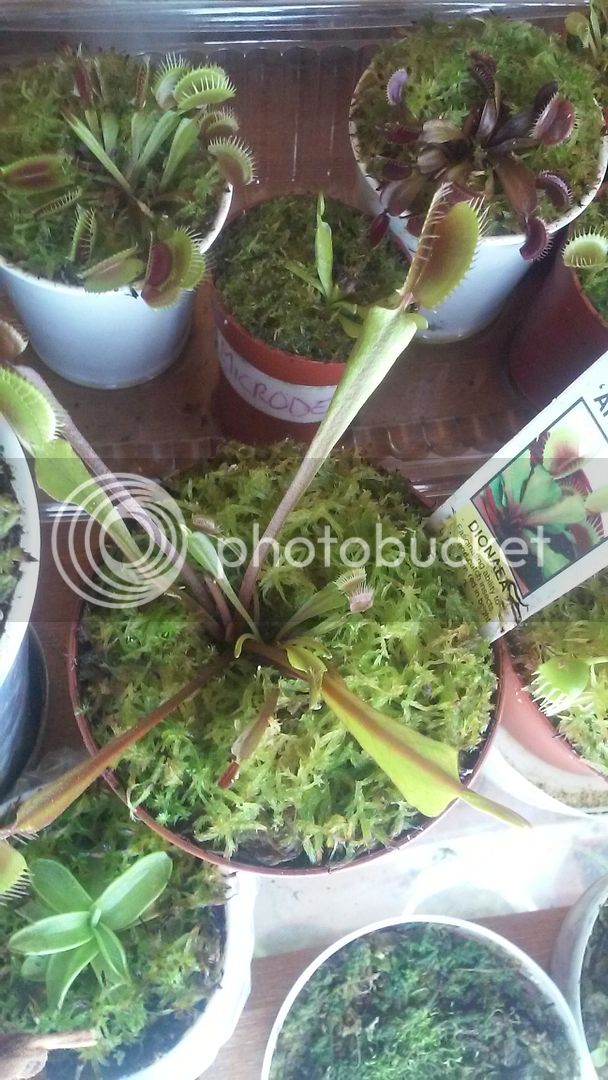 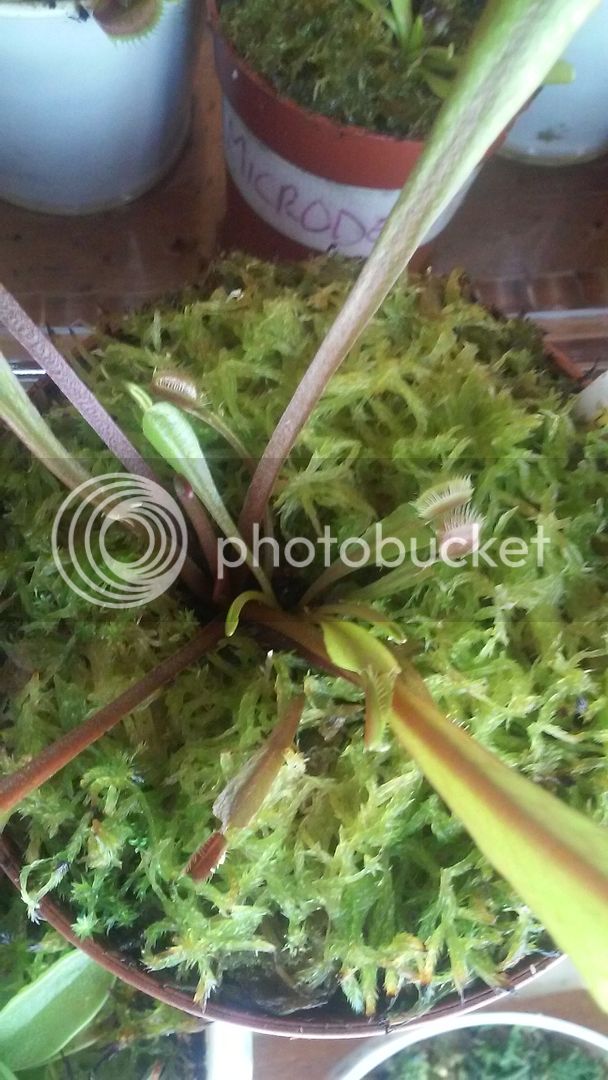 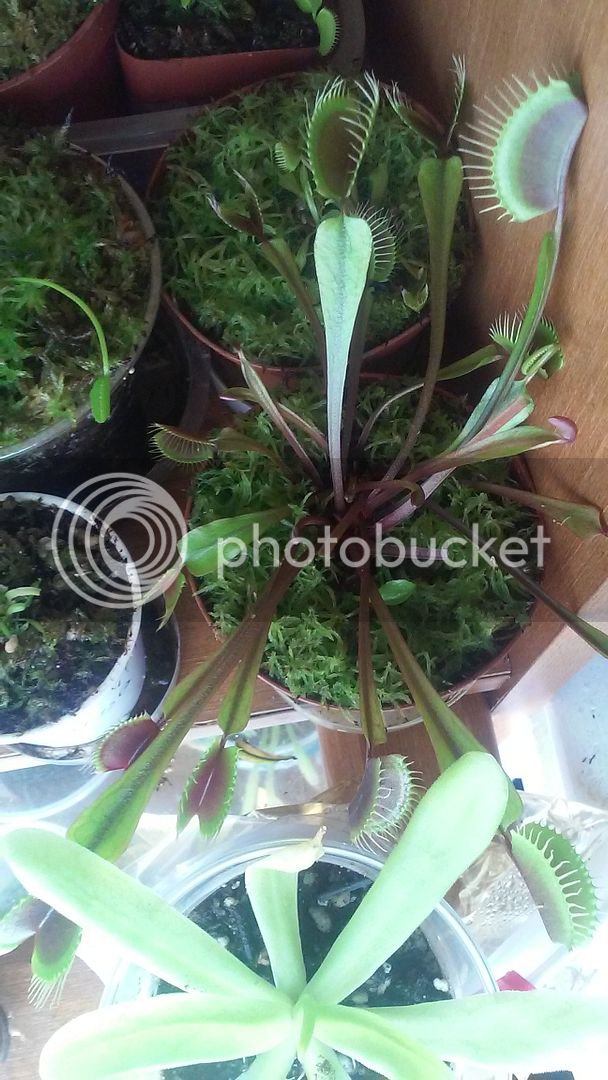 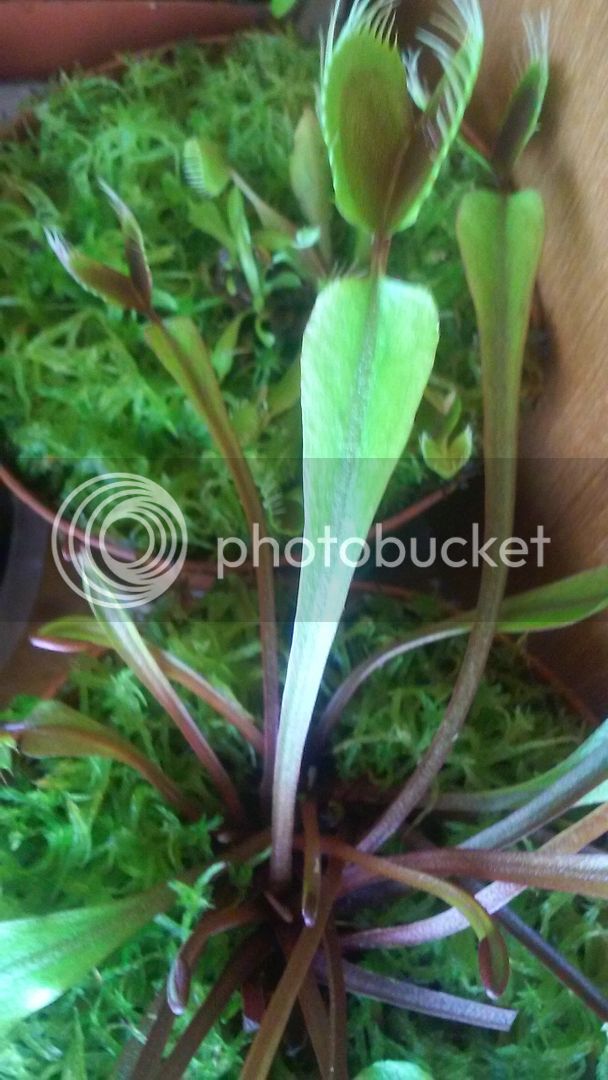 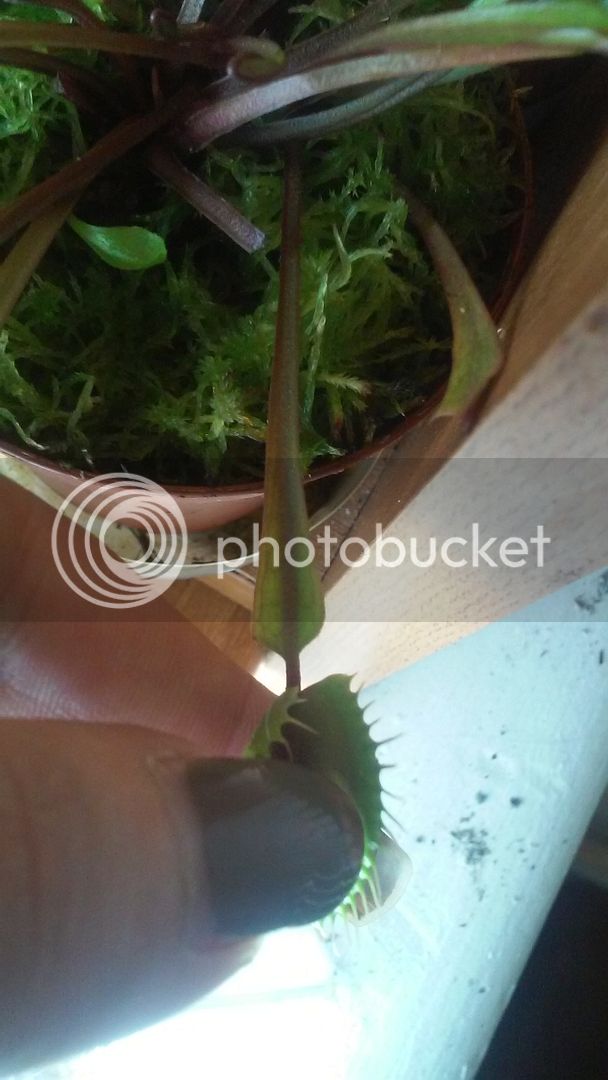 
So idk if this helps answer your question cause the 1st photos where toy see the mother plant splitting into offsets with the smaller VFT's traps/leaves emerging in a mass of places is similar to your photo.
And the other photos show what ive noticed the shapes and sizes of the leaf/petiole's width and shape change during seasons, usually they get more stout and rosetted ground hugging during winter when going dormant.

Those definitely look like Fall traps, but that doesn't necessarily mean that the plants are going to go into dormancy if left alone. Someone else can correct me if I'm wrong, but I think temperature -does- play a part in their dormancy cycle, as well as photo-period. If nothing else, keeping them too warm during dormancy, coupled with the moisture of the soil, will be likely to induce mold / fungus, even if you've never had issues with it before.

I'd be interested to know how safe it would be for the VFT's to put them directly into the fridge from a terrarium setting for dormancy. All of mine, however, are outdoors, so they should go into dormancy naturally and not be bothered when I bag them up for the winter.
K

I too bag mine up and leave them on my enclosed sunporch-greenhouse zath, im sealing my Windows with plastic before i do so, so their inside right now. And they do fine.
But i have no experience in keeping them inside a Terrerium but if your gonna seperate the offsets and hold off dormancy until next year or leave them be and let them go dormant like i said its best u start dropping the temperature to a normal temp for their dormancy rest or put them somewhere where they can go dormant till the growing season is back.
But with the light cues they are getting for the change of the seasons right now their deff going to start to go dormant soon if not already starting too.
T

Unfortunately, I'm certain I haven't got enough space in my fridge to store them for the winter, since I share it with 3 other guys.
I don't know about the temperatures, either, so I guess we'll just have to see if somebody with more knowledge comes along and helps. In the mean-time, if they don't go dormant in the terrarium, I do have a couple ideas on getting them through their dormancy just fine. What if I pulled the larger, more mature plants out of the terrarium and put them in pots in an insulated box outside with a mild heat-source? As for lighting, The box I'm thinking of has a 10-inch circle cut in the top, so I could use a couple panes of Plexiglass to close it up, but still let light in. I live in Idaho near the Tetons so the weather gets quite cold during the winter. The temperature is normally below freezing from late December through February.
Last edited: Oct 16, 2015
K

Heres info you could read up on from Venus' Fly Trap, Venus Flytrap, Venus's Flytrap growing

Quote from CARE SECTION: " Venus' Fly Traps are perennials that form bulbs. They are winter hardy from about Maryland, southward. If you plan on growing the plant outdoors in this region, sink the pot or container in the ground to help prevent rapid temperature fluctuations. A winter layer of pine needle mulch, three inches deep, may help in areas that are borderline for hardiness. North of zone 7, keep the flytraps protected from deep freeze during the winter. A cool window, garage, root cellar, or basement can work. Winter storage temperatures should range from about 30-50°F. This cold rest will satisfy the plant's need to go dormant or "sleep" through the winter. Leaves may die back during winter dormancy. Though awkward terrarium plants, due to light and dormancy requirements; it is possible to grow them in a terrarium if the plants are kept 4-7 inches from fluorescent lights (see terrarium page in web site for details on lighting), and cold dormancy temperatures are provided. Do not freeze terrariums or the glass may break!"
S

Zath said:
Those definitely look like Fall traps, but that doesn't necessarily mean that the plants are going to go into dormancy if left alone. Someone else can correct me if I'm wrong, but I think temperature -does- play a part in their dormancy cycle, as well as photo-period. If nothing else, keeping them too warm during dormancy, coupled with the moisture of the soil, will be likely to induce mold / fungus, even if you've never had issues with it before.

I'd be interested to know how safe it would be for the VFT's to put them directly into the fridge from a terrarium setting for dormancy. All of mine, however, are outdoors, so they should go into dormancy naturally and not be bothered when I bag them up for the winter.
Click to expand...

Temperature doesn't play too much of a role, I think it's mostly light, in December we still had 80° and mine stayed dormant until the first week of Feb
K

Id say this could be very true as mine are on the same light as day and night in my area and they are already starting to produce their winter leaves.
You must log in or register to reply here.