pokie22 said:
Osmocote outdoor and indoor plant food (19-6-12) is what I use. The specification sheet can be found here:

Thanks for the fast reply man!
I'll check the specs tonight with the osmocote I got home.

It is probably not a big issue that the nitrogen and phosphorous is slightly higher. Some people feed with an orchid fertilizer that has near the same ratios. Place the pellets just slightly away from the hairy roots.

Personally, I would keep the regia on the drier side. At times I would be too busy to water, and the media would be become dry (the peat would turn light brown). However, the plants were fine for a day. The overwatering is the killer, and quickly leads to to root rot. Usually, I will smell the rot before I see its effects, and even then it is might be too late. I saved one plant before it was too late from rot, and plants are now germinating from the roots. For me, the root rot smells very pungent, not bad, but I have come to loathe the smell because of its foreboding.

When they get bigger one should transplant into a taller pot.

Oh my bad! Euheum Thanks for the fast reply girl
I'll try it first to some plants I have apart and will wait the result before giving it to all my plants and killing them.

I'll keep it in mind for keeping them on the drier side.

A revival of this old thread is in order as I recently observed on one of my regias.......... 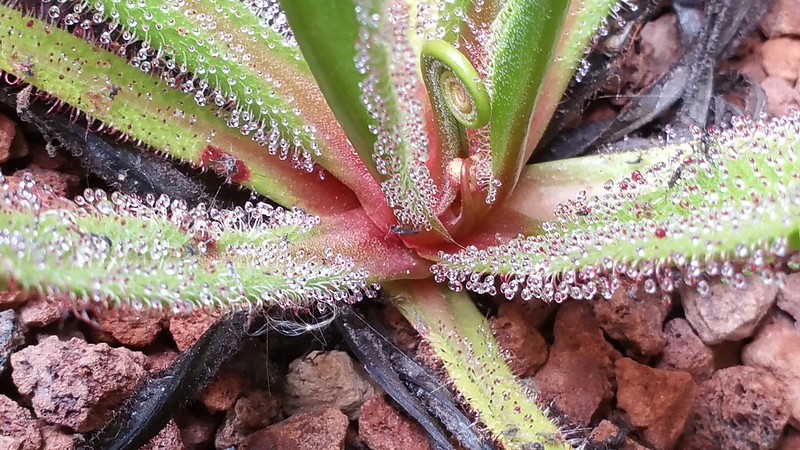 This batch of seed was sown in late February 2015, and is ~ 14 months old now. The seed originated from a well known Bulgarian seller. Sadly, the individuals in the original posts were either given away, or died. Germination of this species is rather straight forward, so I opted for natural germination this round: sowed the seeds outside in pots under the Cali sun. No humidity dome or lights were utilised, just sowed on some variation of peat/sand and plopped the pots in the water tray with the rest of the ungrateful children. Germination occurred within the month. Just to note, I have lost individuals throughout the year while growing them outside unprotected. A sort of self-culling within the population. Some grew back from the roots, others perhaps I let the pots dry too much for a regrow. As with everything, I would like to try and set seed. I know it is best to have multiple individuals to cross fertilize. From other threads on D. regia, it appears that it takes a few years for flowers to emerge, so I am

, to say the least. I would like to hear other's experiences with D. regia and their pollination attempts.
Last edited: Apr 29, 2016
H

From other threads on D. regia, it appears that it takes a few years for flowers to emerge, so I am , to say the least.
Click to expand...

I've heard this too but the half dozen or so I raised from seed to adulthood all flowered in 14 or 15 months + or -. I did lose several after they flowered, so in my case, that didn't work out so well.
You must log in or register to reply here.