Last winter I got quite a lot Drosophyllum seeds and put them in my special pots. In early spring the started to germinate. The first eleven I planted in a pot with soil from a very poor sandy pine forest. Lots of roots included from Vaccinium vitis-idaea for possible mycorrhiza partners.

From another friend who was in Portugal on vacation h I had some seeds of plants accompanying Drosophyllum in its habitat.
The pot was just an ordinary clay pot which sucks up water easily.

In this pot they grew best. From the other plants I had to cut out most. Only one piece of every big species I let grow.
They stayed in a friend’s garden over the summer and against my advice he watered them daily twice and also from above.
They grew like mad and filled the garden with honey smell.

They are now in my studio (5-10 C°) at a big window facing west. Still always in water and I think they might live to spring to go again into the garden of my friend.

One very small plant grew not that well but flowered after a few months for the first time. After this flower two more leafs emerged and than in summer another flower. It’s still alive and has set seed on the last flower.

I had only to cut away an occasional leaf from the wooly plant which might be a Verbascum species or maybe Salvia.
I will give some seeds to my sister which lives in Rom/Italy. Since I have seen pictures here of a frozen plant, there might be no risk from the occasional frost there.
That what it looks like now. 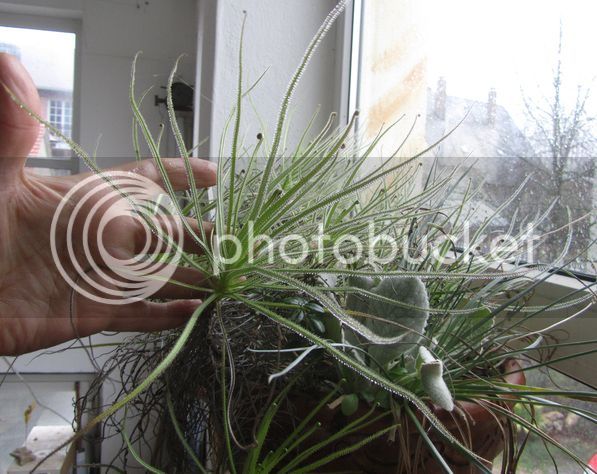 I'm not sure I fully understand your post, did your friend keep watering them in summer ? Keeping them standing in water in winter is no problem, they are active in cool weather anyway. But not cutting back on water during summer kills the adults or at least that has been my experience.
Are you saying they stayed alive due to their roots' interaction with accompanying plants ?
A

Yes you understood right. I was away for two weeks and my friend did not as I told him. Water from above and to the rim of the trivet (is this the right word?)He did it in the morning and mostly in the evening. He was a manager (and does not listen to advices much) but he certainly has the green thumb.
When I came back in August they had doubled their size.
So I left the plants to his care and they grew splendid. It still puzzles me, what the reason for this fact might be. Two of my pots with special desighn have no standing water in the soil, because they suck the water up through the pot. The mixture starts above the waterline.
But the pot with best growth sits just for an inch in the water.

It was my intention to make them less vulnerable to my faults while caring for them, with this other plants to take the excess water a bit, but did not expect this to happen.
What else explanation is there?

They are now less than a year old and certainly adult now. When the spring comes they will flower like the small premature sister plant in this pot.

Here do you see what I meant with the special desighn of my pots.

Could it be an age related thing ? Drosophyllum is a lot more forgiving in its first summer. As they age they cannot tolerate summer watering like that or that has been my experience. My plants were 2+ when they died. I went to UK for a summer workshop and against my warnings my sister kept watering them (she said they looked very thirsty...). When I came back they had all rotted, I was able to save the seeds only. Here is a pic before they died; 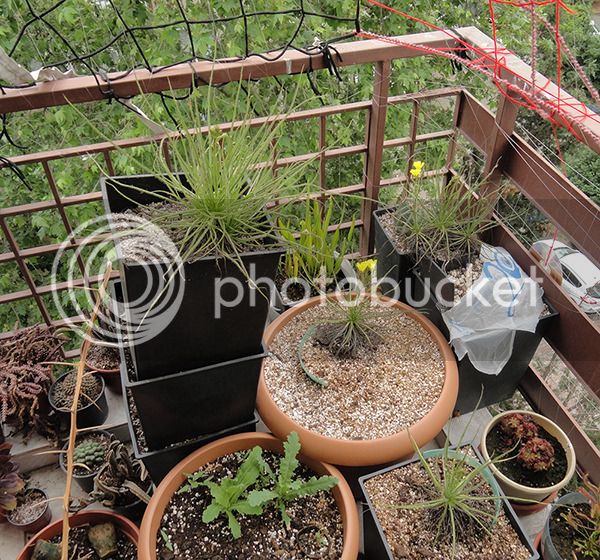 That said, I don't doubt your word. In nature everything is different. Here a gardener gave an african violet in pot to me - it was HUGE. Biggest african violet I've seen and it had multiple flowers in bloom. I had to repot it and what do I find ? Just garden soil with absolutely no rocks or sand and it was too wet. The roots were quite small but they were healthy and the soil had a dozen earthworms in it. My guess is the earthworms kept eating the rotting roots and kept the plant healthy. Try to replicate a similar mix at home and your plant will die in no time let alone double in size and bloom...

So yes we are missing many many elements of nature and we are probably keeping our plants too sterile and isolated. But what can one do ? Experimenting with partner plants is still a very good idea though, I should look into this.

By the way great pot design. Please keep us updated about your plants, I'm very interested.
A

Could be, that age is a factor. Many people told me that the time after flowering and seedsetting is the most critical.
Some even said they always die after the first flowering in cultivation.
This is not true.
A used to raise rare lily species and the pots where something else sprouted were the better growing ones. In some cases the only survivors.

An interesting situation, axel. Mycorrhizal fungi do seem a possible solution. I have been dealing with a similar situation where my Drosophyllum plants seem to require much more water than I am used to from past experience. The soil is not dry, merely drying when they begin to wilt. While I don't keep them in standing water I do water them much more that I would expect. They are very intolerant to any dryness in the soil and will die if I don't keep them wet. I have given in and just give them what they want rather than I what I think they should need. The genetics are that they are from seed from plants that are allowed to dry much more and grow best that way. I don't know what to think. I like your idea of using natural soil.

'Sorry to hear you lost your plants, maxima, but I am glad you got seed from them.
A

Here is a little update. 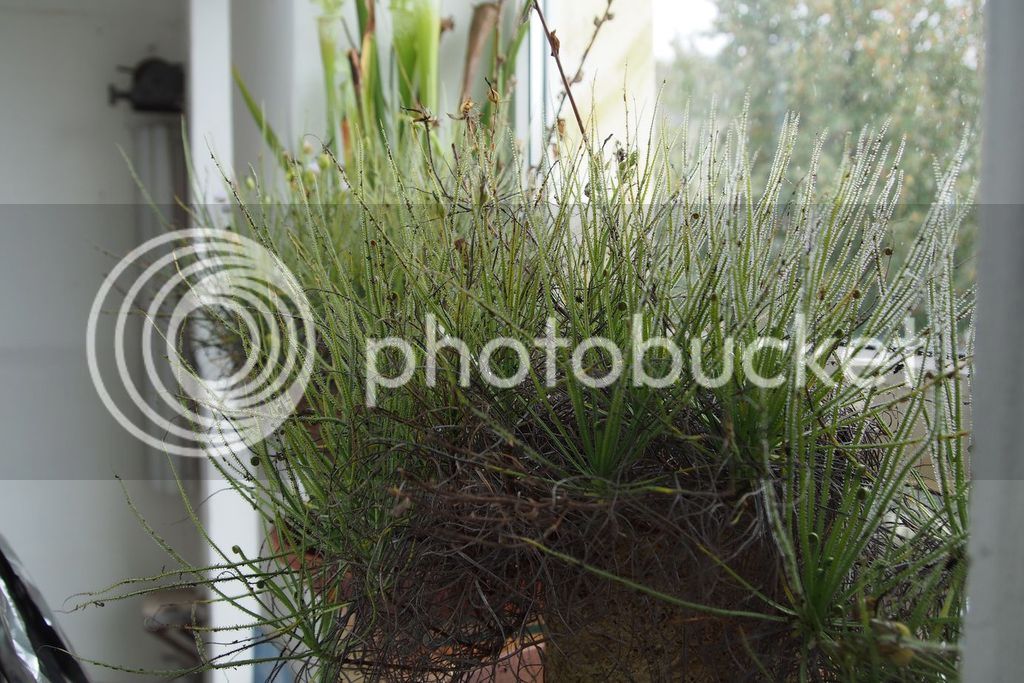 The three pots flowered abundantly. Most plants three times in a row and of course set a lot of seeds. Still have some to give away if anybody wants some. No plant died and most have more than three growing points.
They stay all the time in water apart from on or two days since I have them.
The picture is from only two of the pots. One was a gift to my friend who started to over water them. But it is again in my studio for the winter. Just not on this picture jet.
The great sarracenia grower Mike had great advice too for this subject.
Drosophyllum lusitanicum (Dewy Pine) | The Sarracenia Forum

Wonderful !!! Dream to achieve.
A

I think, do keep them always wet and let them have some company from other species will do the trick. I really did not fuzz about them. This spring/summer was very rainy and mostly cold in the beginning and dry and really hot in the end. They just flowered again after every cold spell so I had on most three flower stalks this year. Only the small plant which flowered the first year is still a tiny plant and did not flower again. In the heat I had to refill in the morning and the evening.

I started a new one an ordinary clay pot with soil from this pine forest. It is a sand pit and the top layer just pushed off. It consists of some pine roots and some peat like soil but 90 %sand. The first seedlings started outside I just let them stay wet and keep them till next spring at a window in my studio.
They don’t get aphids and as long I keep some water in the plate it is one of the easiest carnivore I had up to now. Maybe a little bit too sticky and big.

Only once, one was dry in the plate for more than one day. Lost all its drops and stayed so for some days. It looked a tiny bit flabby the day I watered it again.

Nicely done!
You must log in or register to reply here.