While this species is now available in Europe, there still aren't that many people growing it. I thought it would be a good idea to start this thread to pool whatever info we have & hopefully make it easier for all growers to be successful.

Observations - (would be nice if someone who has Taylor could share the official info)
- leaves - narrow & long - typically adding wisps of root-like structures as they age
- tubers ~1/8" & shaped like a blunt rugby ball (the ones I've seen)
- flowers - somewhat angular & elongated compared to Orchidioides - unique color
- dormancy - unlike most Orchidioides where dormancy is usually optional (or just a slowing of growth), it appears that a mandatory rest period occurs
- classification - section Chelidon - although Barry believes it may have some link to section Orchidioides

I received a few small tubers in the end of May 2013. I placed them in a small pot of live LFS (& hoped). There was also a piece of severed foliage that was still green - this I placed in sopping wet live LFS. Thankfully, both the tubers (2) & leaf grew new foliage. I placed a piece in a 4" x 4" x 4" netpot of live LFS & another small piece on an ecoweb/hygrolon plaque. After growing for a few months, all foliage died back. I could see a tuber on the ecoweb & hoped there were others. Months passed with no growth (from what I found online, it does not appear that the mountains where this plant grows has a truly arid dry period - so I kept the LFS moist. (I would love to know if this is appropriate or a dryer rest is better). At some point, I searched for tubers in the small original container & found none -- ditto with the netpot. I could still see one tuber on the plaque but it wouldn't sprout. My luck with single Orchidioides tubers has been horrible so I figured I'd lost the species. I kept the LFS moist & green in the netpot & small dish & periodically watered the plaque (however, I did eventually harvest live LFS from the small pot for use elsewhere - might as well use it). A few months ago. I noticed growth in the netpot & then in the small pot. Evidently there were tubers I hadn't found in both. Several weeks ago, I noticed stalks coming up in the netpot & a few days ago, the flowers opened. The ecoweb/hygrolon plaque now has growth that is approx 4-6 weeks behind the others. 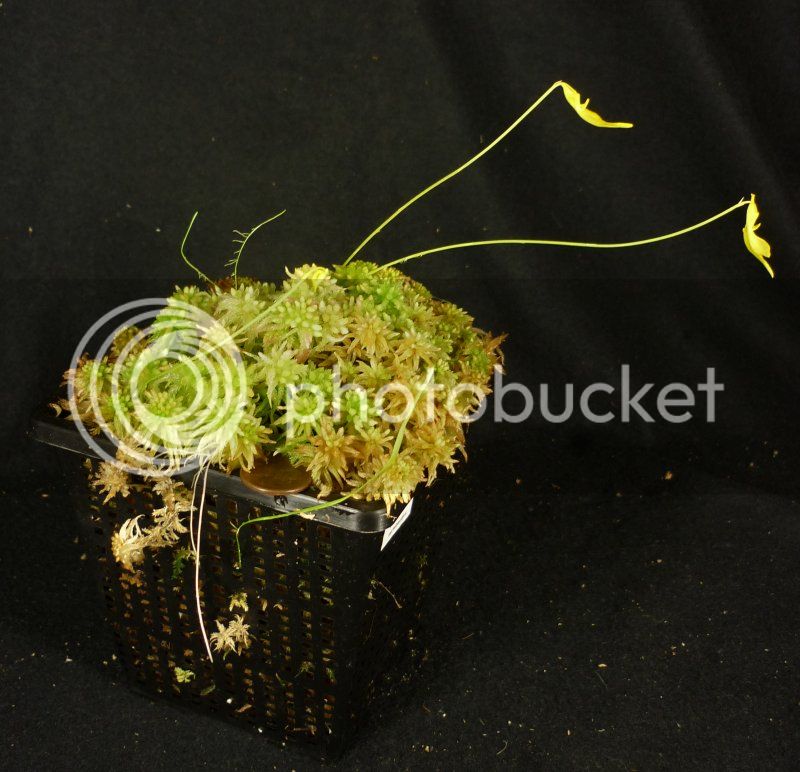 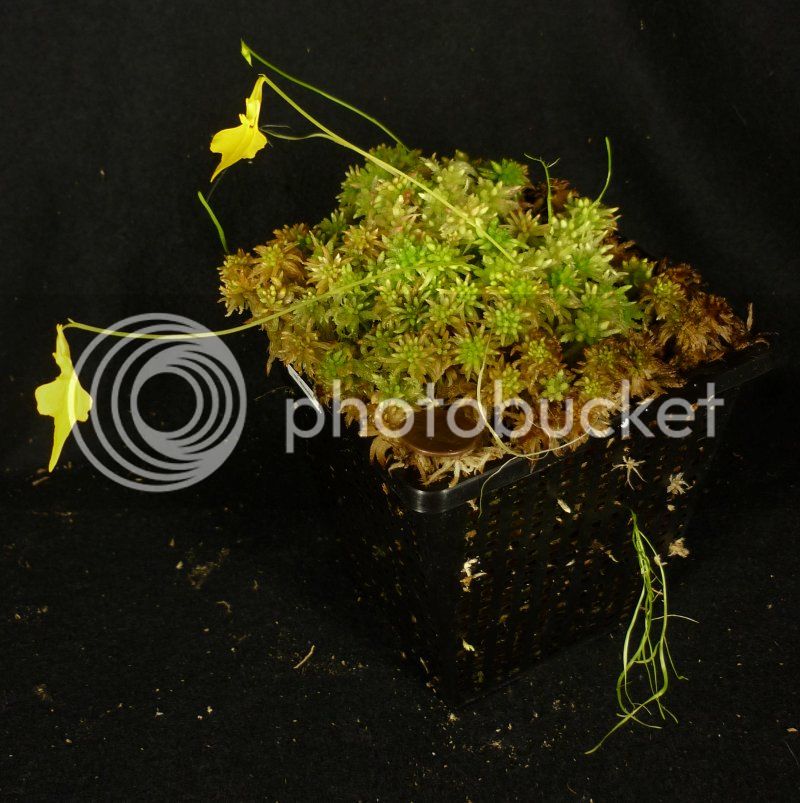 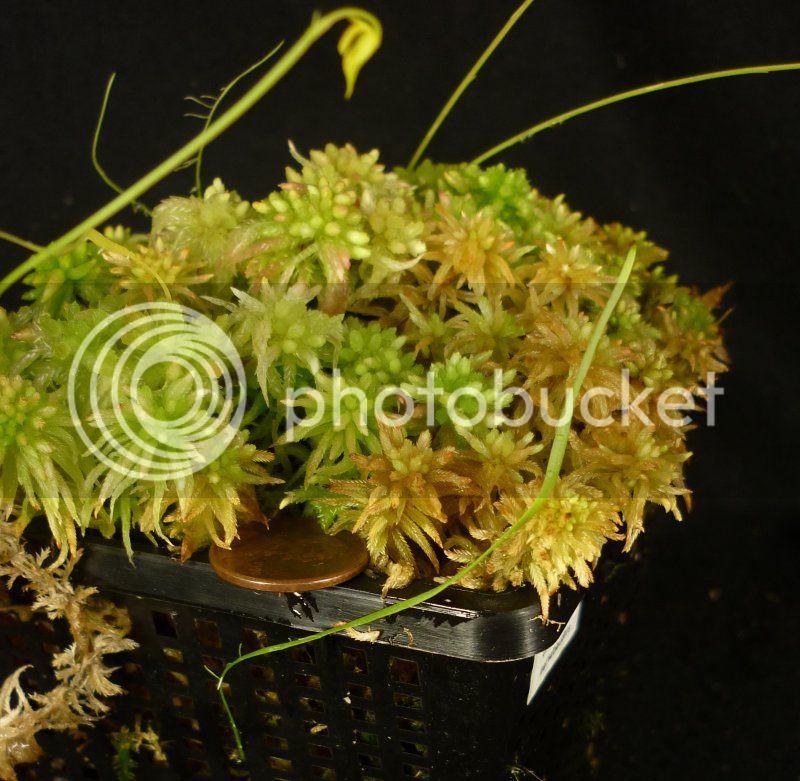 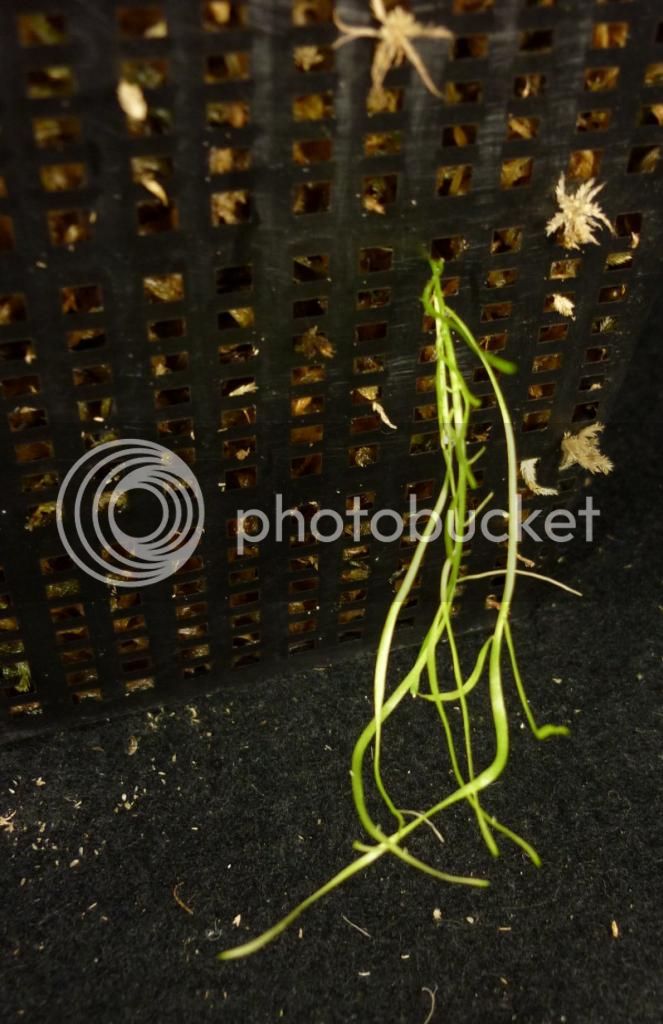 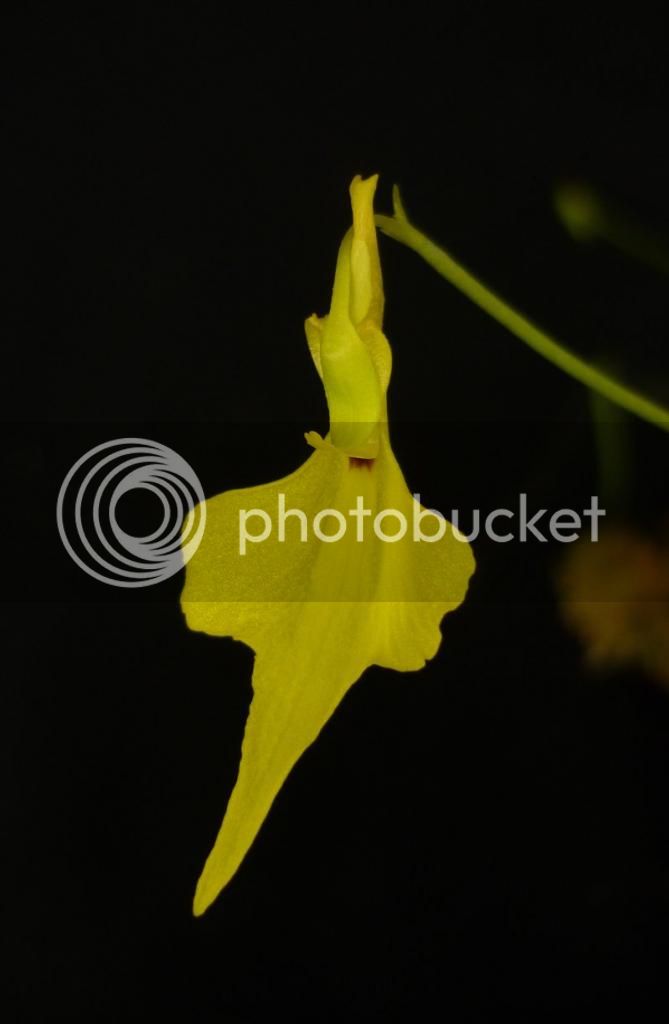 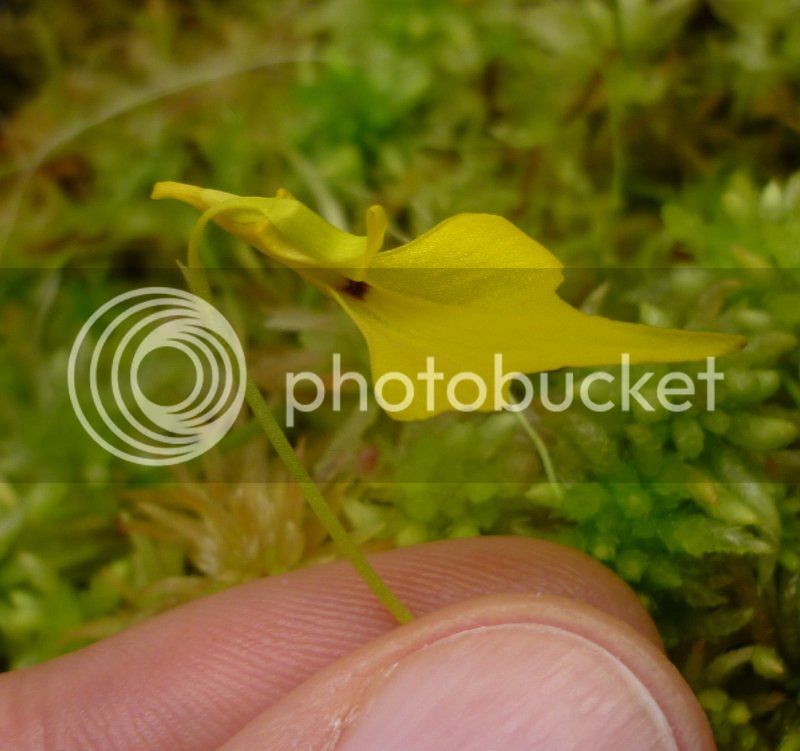 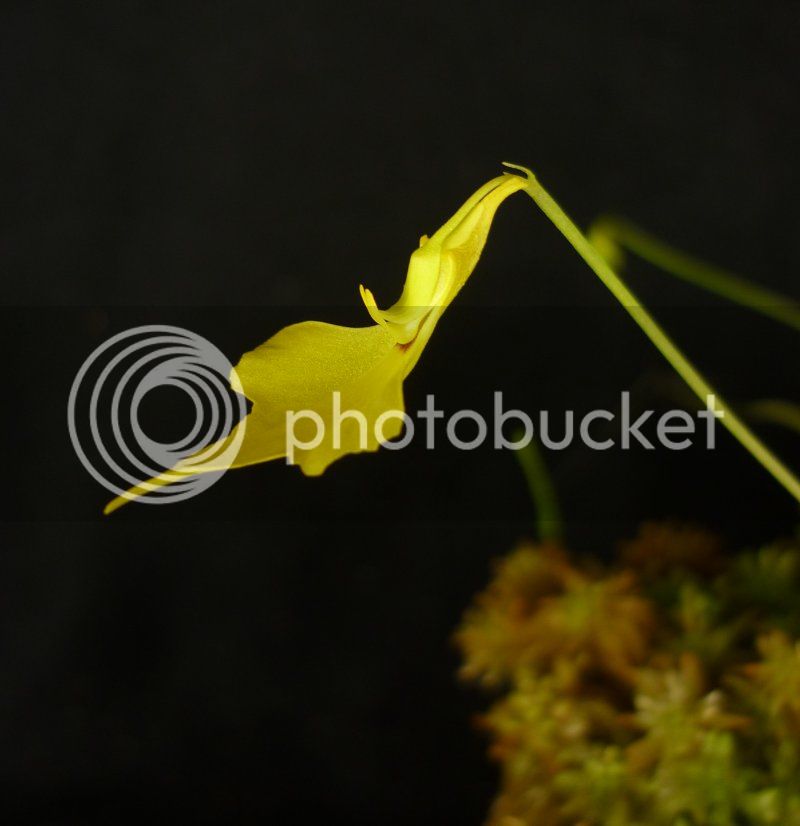 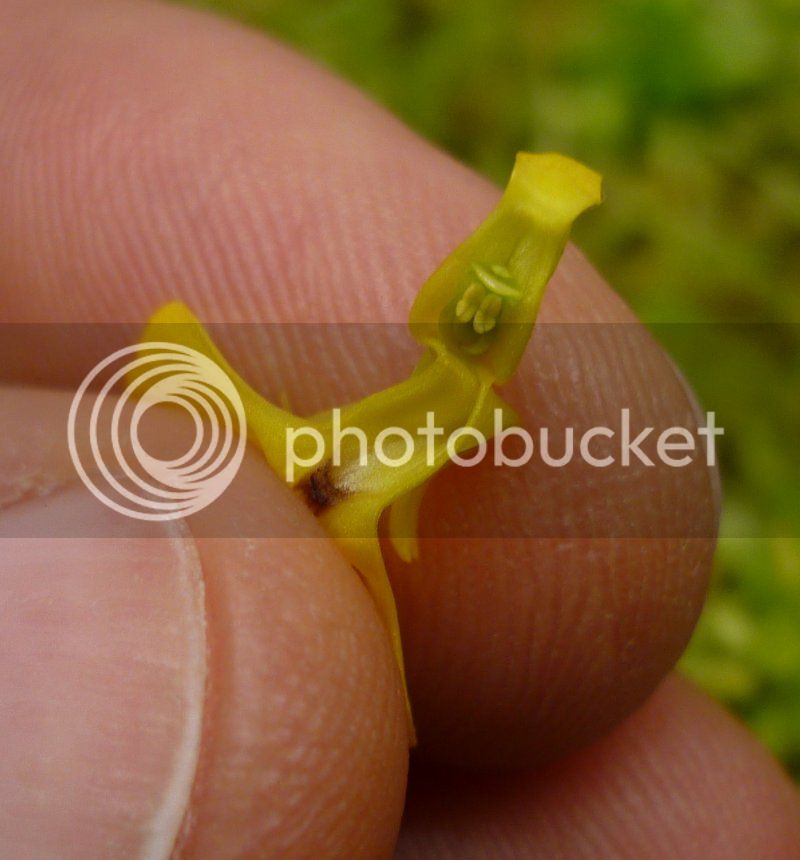 Tuber is visible on left (approx 1" from bottom) 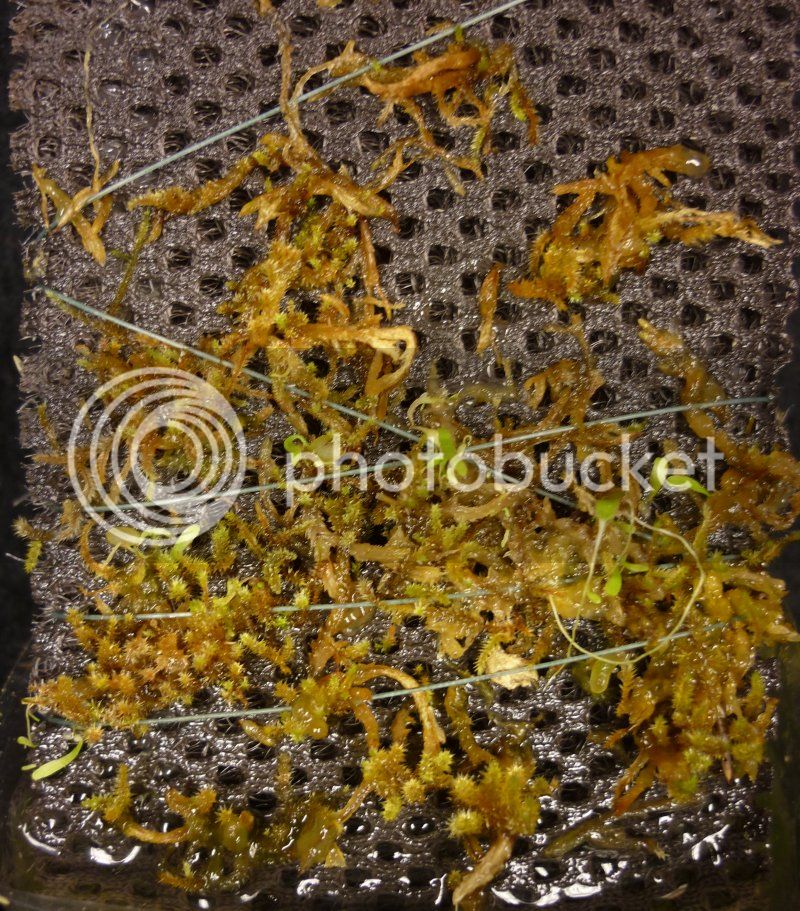 Awesome. hmmm might need to rethink a bunch of growing systems for orchidoides. Based on color and shape of flower I am guessing it is a bee pollinated flower.
Last edited: Nov 10, 2014

Pretty stoked that you've started working with this species Ron. I had no idea that it had even entered cultivation. Gorgeous species ! Keep us posted !
G

As you know Ron, my CP experience is pretty low, so take what I say with that in mind. Orchids that share a range and elevation with this species do experience some sort of a rest period. Many of these species are monopodial, though, so they do not contain any sort of water storage organ outside of leaves/stems. While others, like many of the Bulbophyllums (Megaclinium need a drying in cultivation in order to bloom. Finally, species like those in the genus Ancistrochilus go totally deciduous. Based on this, I think I would reduce watering in their "dry" season but do not allow it to totally dry and keep humidity fairly high (that's how species like those Aerangis can survive with little to know water storage capacity).

Wow such elegant blooms on this species. Great job at documenting this plant's growth habits in cultivation.

Recently, I received some plugs from a friend who has been growing U. mannii for a very long time. Thanks Ron for creating this very informative thread! I found this after I searched why the leaves on my U. mannii started to shrivel. I must say, this species is more finicky than the others I grow. A few flower stalks were not as lucky and were singed by the high light. However, there appear to be new flower stalks and a few little cute tubers. Perhaps they are happy again. 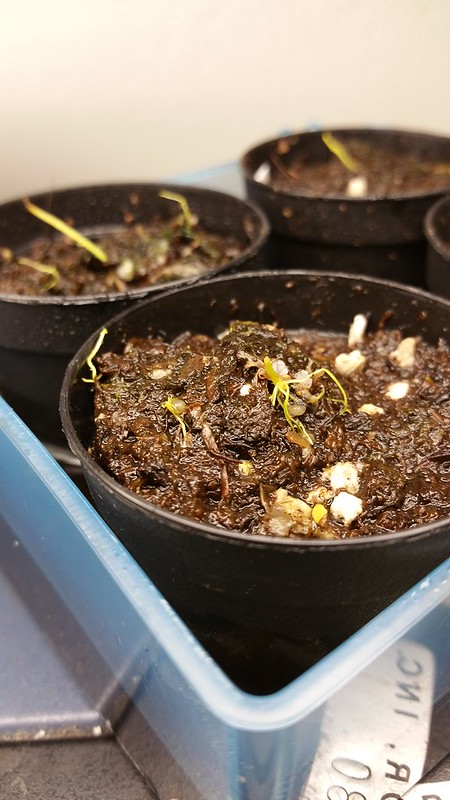 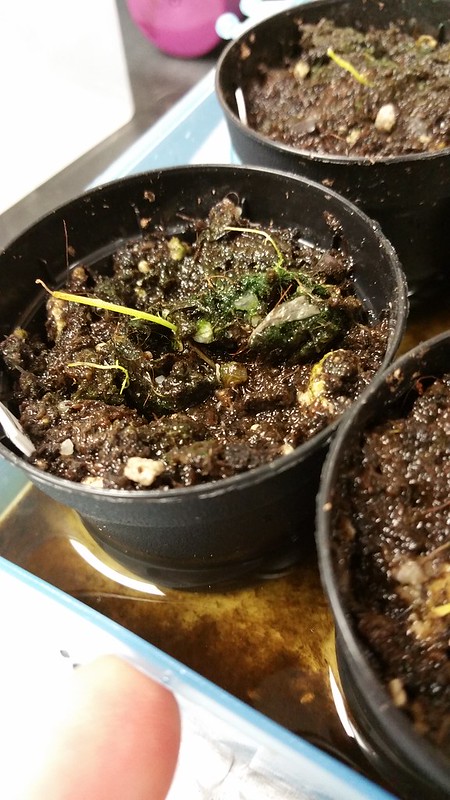 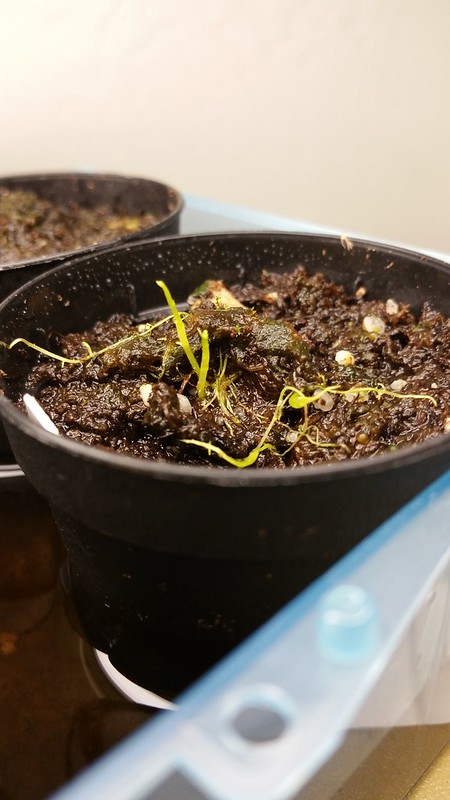 H
My experience growing U. jamesoniana

Accidentally triggered Dormancy in Tuberous Drosera | Any way to halt or reverse it?