Just recently joined the forum, though I've been lurking for a while. Started growing cps about a year ago, and now have a set of Nepenthes and am putting in an in ground bog for VFT, sarricenia, and sundews. I'm located about fifteen miles north of Miami.

Welcome to the forum, I'd like to say I could guess where you are but so many people have so many different borders for what Miami is, some see Miami as downtown, some see Miami as Miami Dade county haha. In any case feel free to ask any questions you may have, also, do you mind me asking what sundews you want to put in the ground?

Welcome to the forum! I'm a newbie with CP's, as well. I've been growing nepenthes primarily for two years now. I'm thinking of trying some sundews this year.
I had family that lived in Coral Springs, FL not too far from Miami, FL.

Hey thanks all! I live in Coral Springs, actually, in south Broward County. I'm not used to anyone knowing where that is though!

I only have a few dews - capillaris, a couple filiiformis ( tracyi, filiiformis red, and Florida All-red), and one aliceae that doesn't seem to be doing well. It's in a tray now, and it's seemed to stop growing and lost most of its leaves. I'm hoping that's just dormancy - the bud seems intact - but it's my first winter with it so who knows.

The bog will be mostly sarricenia. I've tried some pings but killed most of them. Too much sun, I think.
S

Hmm aliciae doesn't go dormant. Show us a picture, maybe we can figure it out. Yeah I know where it is haha but it's true, no one knows anything except Miami
F

Thanks! Here are the pictures. The plant was green and perfect when I got it. Turned red, had good dew, then slowly started to look like this:

Here we go - I finally figured out how to post pictures.

Thanks all in advance for your help with this plant. 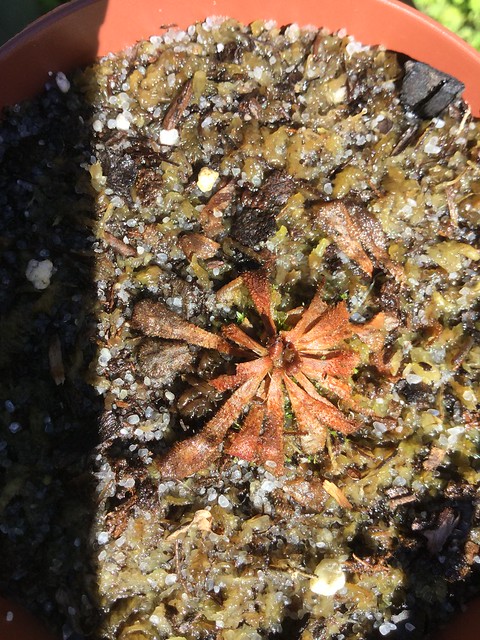 What are the conditions you are keeping it under? It looks pretty dead to me, although I know that some sub-tropical sundews can regrow from the roots if killed by cold temps. I'm not sure if aliciae is one of them.
F

Full sun, and in the last month days have been in the sixties to mid eighties, nights from seventies to fifties, with two or three nights in the high 40s.
S

It might be the shock from the humidity change
S

Any chance it's still alive? Should I change its conditions, or is it too late?

Hey guys, born and raised in wpb myself good to see other Floridians on here. Currently in NC [emoji12].

Sent from my iPhone using Tapatalk
Last edited: Mar 9, 2016
You must log in or register to reply here.