I found this site via a Google search for culture info on Mexican Pings. But as it turns out, my one and only Mexican Ping was purchased from FlyTrapShop.com this summer-so I should have known about this forum before now. I have a P. moctezumae.

I also have a few pots of VFT, about 5 Sarracenia purpurea, one S. "Dana's Delight", one S. leucophylla "Tarnock", one S. "Scarlet Belle", multiple Drosera spatulata and D. capensis, plus my one P. moctezumae. I do have two P. esseriana due to ship next Tuesday.

Here's an old photo of part of my collection taken a few years ago. 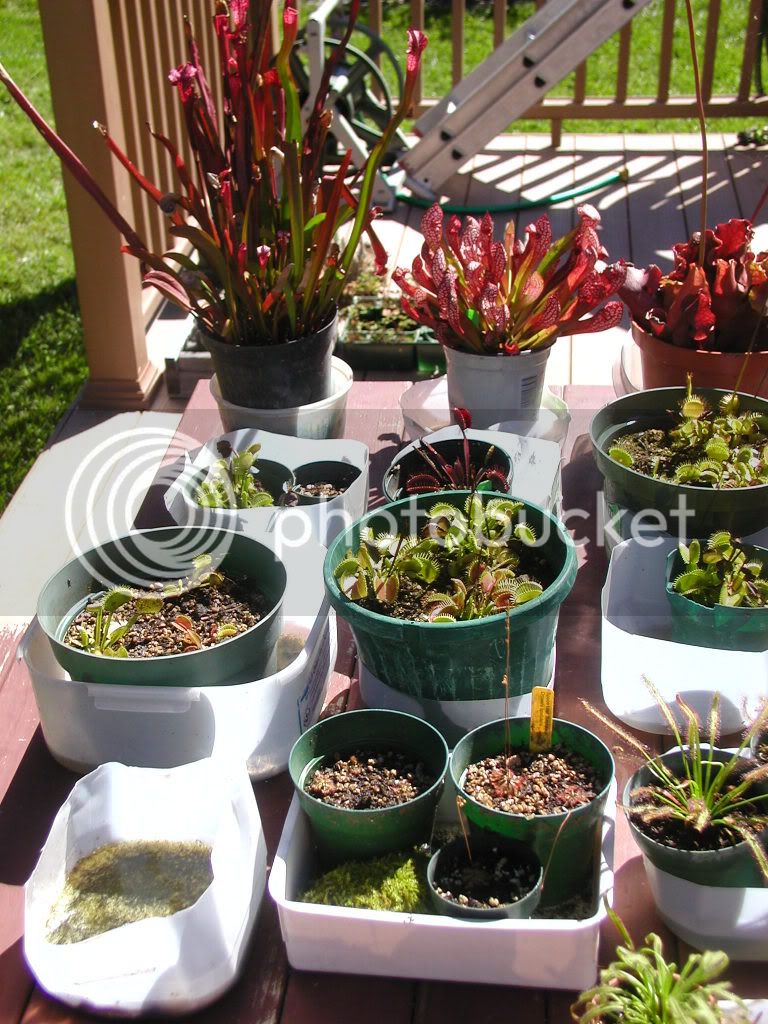 I have a friend that manages an approx 8 acre wholesale greenhouse that lets me store my winter hardy, cold tolerant plants there over the winter: Cacti plus CP. I keep the Drosera in western facing window at work over winter and they bloom just fine all winter long. I also keep my warm climate cacti there too.

I became interested in the Mexican Pings after reading a short article on P. esseriana in the newsletter of the Connecticut Cactus and Succulent Society this spring. Our president works in the U Conn greenhouses and featured this Ping. The sentence that said these Pings can be found in the company of cacti and succulents in Mexico really piqued my interest. I looked at some of the photo's in Oliver Gulch's postcards at http://www.pinguicula.org/A_world_of_Pinguicula_2/Pages/Oliver-s-Postcard_3.htm site and sure enough I saw a photo of a Mammillaria-cacti, Selaginella-Spike Moss, and in another postcard I saw a Ping, Mammillaria, and other succulents all in the same photo.

My goal is to try to grow the cacti and pings in the same container and same cultural conditions. But first I need to get some experience with Pings.

Welcome to the Terra forums Jerry. Nice collection you have there as well!

your collection is very nice
Can you take some current pics
Last edited: Oct 9, 2011

Location
Michigan -- If you don’t like the weather, blink!

your collection is very nice
Can you take some current pics
Click to expand...

My problem is the digital camera is broken. All I have is a Flip video. I do need to get out and take another video.

Here's a video of my first repotting of a Sarracenia. It is from June 2010. I'd appreciate comments on my repotting technique. I am not an expert. The video's are definitely not expert quality.

I guess it is off topic, but what Tropical Fish are you keeping? I currently have Tanganyikan cichlids. I am a member of the New Jersey Aquatic Gardeners Club. We have a forum but membership there is limited to those local to NJ. The Forum is not public except for a few threads.

We set up a 150 gallon tank in my ex boss's office in Nov 2009 as a club project. One member took a time lapse video without letting us know. Here's the video: http://www.youtube.com/watch?v=4xF3s0HQVJw It had Mineralized Soil under the substrate. The goal was very low maintenance.

The tank is broken down now. I sold it to a member of the club down in Tom's River, NJ. He's going to keep Koi in it over winter. We removed the blue paint with paint remover once it was down at his house. We removed the blue plastic on the overflow too. He's getting new plastic made and will paint it black. His blog site: http://aquariums.seaspraydesigns.biz/

He makes LED fixtures and we are currently in the process of making one for me. I will be using it on my 65 gallon Tanganyikan tank at work in my office. http://youtu.be/baUHDPMaLjU

He's got a great pond with really soft water. He's right on the border of the Pine Barrens. I got him some Sarracenia purpurea and they are doing great in a bog area. He's going to try some hybrid Sarracenia. The pond filter/waterfall runs all winter.

Welcome!
You must log in or register to reply here.

B
Hello from Texas