How much sun for form of Darlingtonia from SF Botanical Garden?

I decided to get a Darlingtonia californica today at the SF Botanical Garden (aka Strybing Arboretum), partly was because they were selling really nice plants at a good price. A friend who volunteers at SFBG also told me that when he bought one he was told to avoid too much sun (he lives in SF). This surprised me, but I looked at the bog (which may or may not be their source of material) and saw that it is indeed partly shaded. For those who don't live in the area, partial shade in foggy/cloudy SF is almost like full shade in the sunnier areas of the Bay (for example where I live). I understand Darlingtonia can grow in the wild in different levels of sunlight, and presumably different populations are at least somewhat adapted to those.

So I'm partly curious what people think about Darlingtonia and sun in general (my average summer temps are 75/55). I'm also curious if anyone has any specific knowledge about the one the SFBG grows and sells (and again it's possible those are not the same plants).

I don't have full sun anywhere, so a tolerance for growing in considerable shade would be a good thing.

Here's the plant--in a 4 inch pot. There are a couple of smaller ones popping up at about 2:00 (small green leaves, closer to edge than small red leaves) and at 10:00 (partially obscured by ~ 6 inch leaf/pitcher). 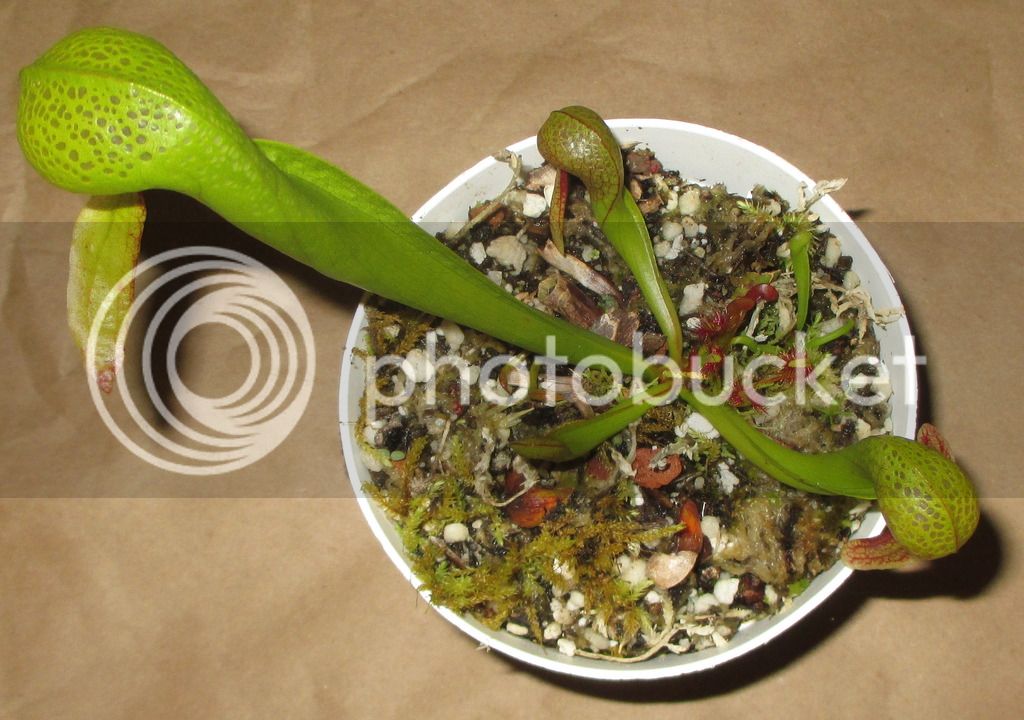 (There's also a Drosera capensis in the pot, near the large growing point.)

I was told by an experienced grower that although the plants tolerate shade, they do best in full sun like Sarracenia. When I bought one recently the seller told me that it was a plant that did not tolerate direct sunlight yet I've had it sitting in the sun for more than a month with no problems at all.

Grow it in the least shade you have available, if necessary there's always a fallback of reflectors. In shade it'll be cooler. You may lose a bit of colour but any Darlingtonia even a paler one is far superior to the other CP's

Mine gets about 7 hrs. of sun, the most I can give it, and it does pretty well but the mature pitchers stay green, with no hint of red, if I could find a way to give it more sun I definitely would. I think one of the reasons some people say not to grow it in direct sun is because of over heating concerns, but that's not a problem for me. All that said, I did grow my in the shade for several years and it did reasonably well, so I doubt you'll have any problems.
Last edited: Jun 14, 2015

The heat concern is why people will sometimes place ice cubes on the soil when it's really hot to cool down the roots. Other people build elaborate water circulation tables. I suspect an insulated pot would work well too, though I have no idea at what temperature that would be necessary.
S

fredg said:
Grow it in the least shade you have available, if necessary there's always a fallback of reflectors. In shade it'll be cooler. You may lose a bit of colour but any Darlingtonia even a paler one is far superior to the other CP's

Nice to know that SF is San Francisco and not South Florida or San Fernando
Click to expand...

Haha, I wish someone was successfully growing Darlingtonia outdoors in south Florida
You must log in or register to reply here.

How to Safely Seal a Bog Garden Crack