I finally was able to grab one pot of it. 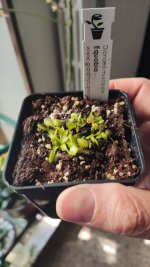 Then some days later I was observing its particular way of deploying its "necked" traps,
( a long and twisting process: neck-corkscrewing them instead of a straight-up movement )
and took this picture <left> where I could show all the phases and compare it to a normal Dionea <Right> 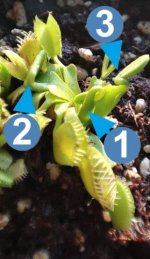 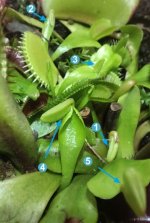 After taking that picture using Macro still exploring around, the camera in my hand, I got my first surprise....
.... seeds were germinating UNDER the visible plant's traps, not yet rooted .... roots still showing out.

I did suppose it was my duty to save them urgently !

The issue: some plants were under 2mm !!!
I used my electronic's forceps!!

They are small enough for e-components, so they did the job pretty well. The proof is I was able to save 7 of them!!!

This picture is taken one month after the repotting 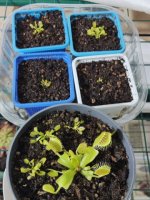 
I had to take the lighted magnifying stand to work and to see them good enough to not do damage.
No idea if any of them could make it when I did it !!!
B U T
now all of them are in a pretty astounding growing rush.
This morning Microb deployed his 5th leaf, and its diameter is now 4mm !!!

Hurra for the Microb !! 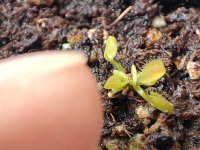 Microb is still 4mm in diameter but now has got 8 traps. I've put some sand around the little ones to give them more light from sun reflection.
Power of the sun ... One leaf is coloring up pretty strong

Strange as it can be ...
you can see the lowest leaf is close, it snapped on a very very very small fly
... while I was looking !!! 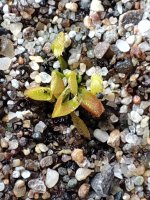 It's nice to hear that others also use magnification and fine tweezers when potting up very small plants. I'm looking forward to further updates.
You must log in or register to reply here.

my collection got ruined by spider mites, had to restart the whole thing! so here is my typical i've had for 38 days