I haven't been able to do very much on the forums of late due to a hectic school schedule, but I plan to get back into it over the holiday break. For Christmas, I got a Cannon Rebel T6 camera! It will be a great improvement over taking pictures with my iPhone, which has ~12 megapixel resolution. The Rebel has 18 megapixel resolution, and a close-up mode. Tomorrow I'm planning on posting about one of the nepenthes I bought almost a month ago. It has been growing healthily and has opened two nice pitchers, but I fear has developed root rot.
Happy Holidays!

Rot is not good. What makes you believe you have it?

Sent from my VS500 using Tapatalk

Grey Moss said:
Rot is not good. What makes you believe you have it?

Sent from my VS500 using Tapatalk
Click to expand... 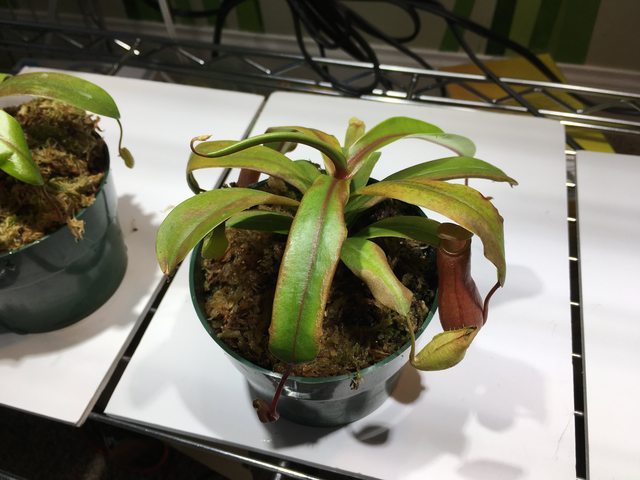 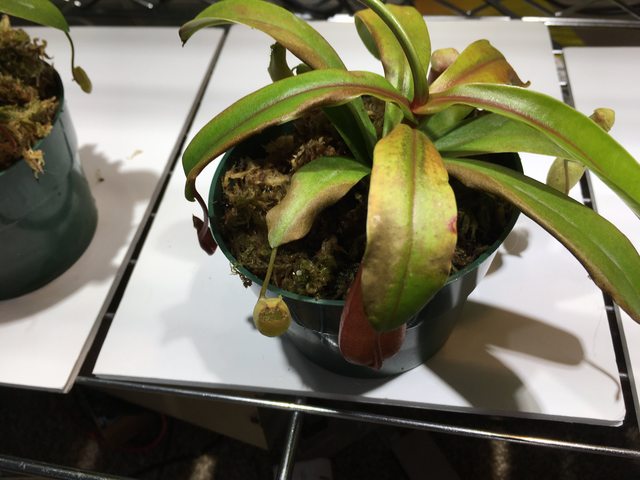 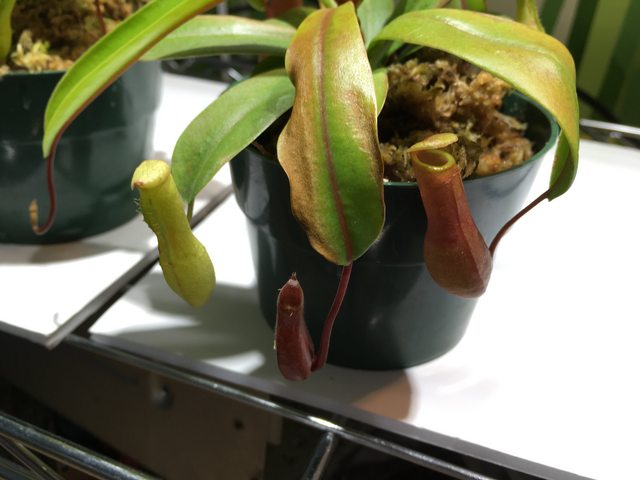 I don't know what the heck happened! two days ago it just opened the best pitcher yet, and today both of them look like they are going to die. I'm about to re-pot them into pure LFS. I just squeezed a bunch of nasty water out of the pot, and when I repot them, I'll take pictures of the roots.

Looks like a bit of light burn, or maybe a temperature extreme? I'm not sure it's possible for that hybrid to get root rot.

I'd agree that it looks a bit more like cold damage than rot. In root rot you'll see the leaves blacken from the stem outwards. Your damage is coming in from the margins. However, keeping neps a bit dryer is never a bad thing. Especially if you find you're squeezing stagnant water out of it.

Sent from my VS500 using Tapatalk

I went ahead and re potted them and I'm glad I did. the one on the pictures was the worst of the two. The way they were potted would have killed them regardless of their health. The plants were in a small ball of soil, and wrapped with some type of fabric. they were then placed in a pot with peat media packed in the bottom half but sphagnum in the top half. this would help them stay alive on the shelves, but not long term. The sphagnum kept in too much moisture, and the soil was too tightly packed to the roots. When unraveled, it smelled pretty bad. Half to the roots were dead and fell off of the rhizome as I washed it off. the root ball was rotten, and when I attempted to make a cutting, it revealed that the center of the plant started to discolor from the inside. The leaves with the fresh pitchers were sadly a casualty. I potted the lower plant and the fresh growth in LFSM. The top growth did not look like it was damaged yet.

The other nepenthes plant I also repotted. this one did not have root rot, but does appear to feel the effects of cold damage. What causes cold damage? the plants are kept in a sealed container and under lights. Could the condensation of water vapor at night have a refrigerative effect and cause cold damage? The VFT's, Sarracenia, and drosera in there do not have much of a problem. I estimate that it gets up to about 80 inside the container during the day, but I have not checked at night. The only thing that has changed is that I cleaned the container out a few days ago.

nimbulan said:
Looks like a bit of light burn, or maybe a temperature extreme? I'm not sure it's possible for that hybrid to get root rot.
Click to expand...

I thought it might be light burn too, but that just does not add up. Having thought that earlier, I moved it to a shadier part, which had no effect. The browning even happened to leaves that were older, and were shaded by the other leaves. They died at the edges inward, while the roots rotted away. What was left of the roots smelled terrible. The stem and insides of the stem also looked discolored. I've looked for pictures that are like what I have, but nothing quite matches up. I know it's not the conditions since they were doing spectacularly until maybe at most a week ago. Inside the container, it is currently ~71 degrees. I know the relative humidity is high based on feel and the amount of condensation build up on the cover and sides of the container. I'd estimate at least 50%. Lights are 2 ft above the container, main light for the setup is a daylight white LED with a brightness of 1325 lumens. I have not taken the temperatures at night, but I doubt it drops below 60 since it is in my room. Earlier I cut up the plant after discovering the rotting root ball. I hope the cuttings take well. 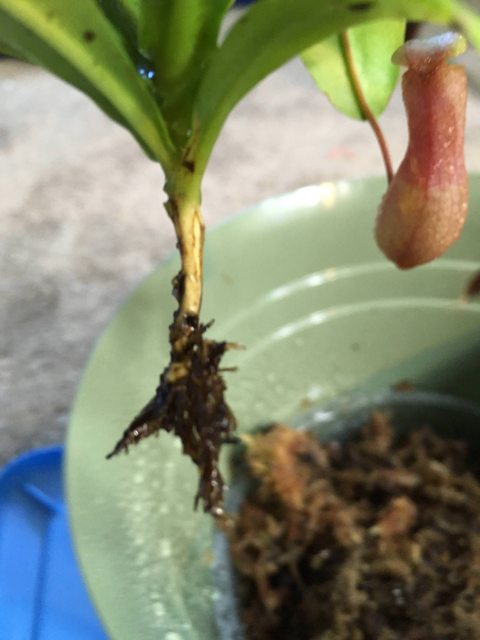 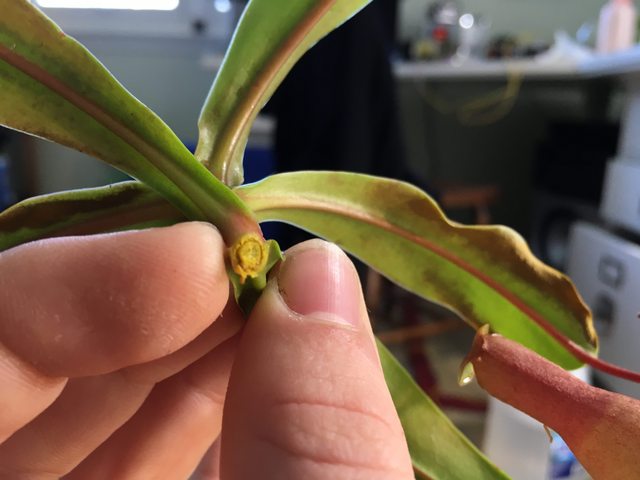 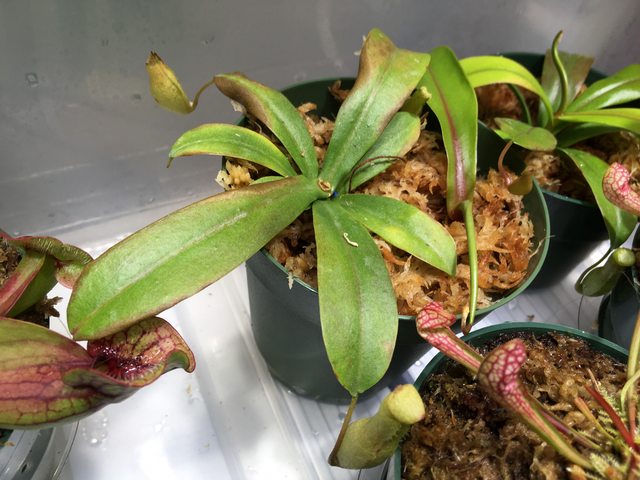 I'm kicking myself a bit for not re-potting immediately after buying them.

Ps- I was pretty sure that it was a ventrata. My big ventrata is finally starting to open the first pitcher that has formed entirely during my possession of the plant. It looks great! Here's some pictures of my happier plants as well. 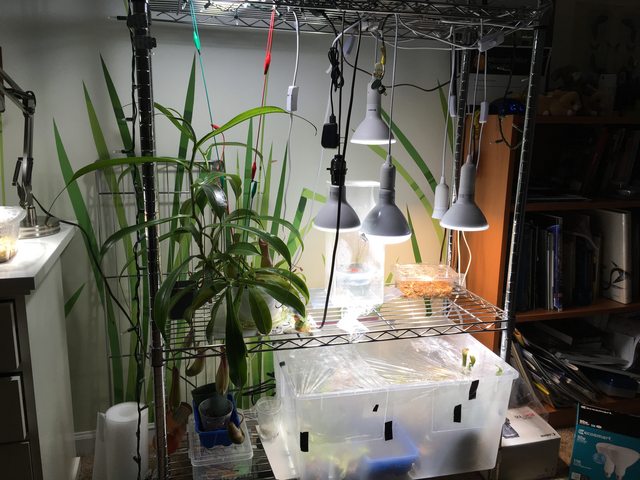 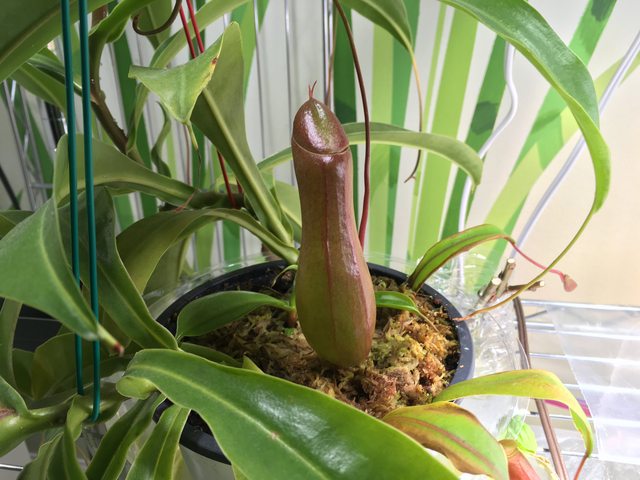 The house cleaners decided to stick the sick leaves I had cut off into the ventrata pot. 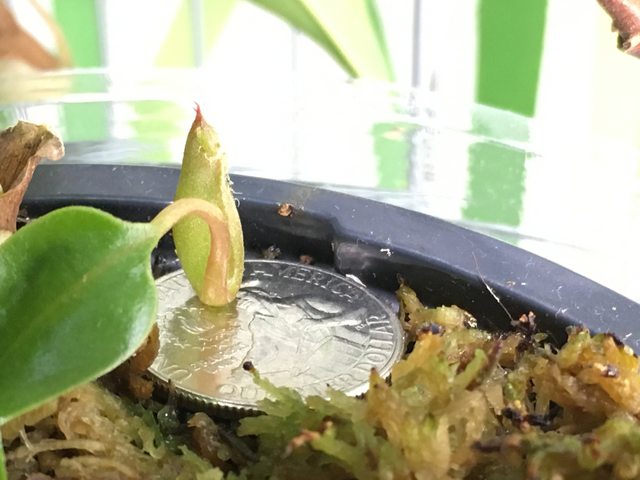 close up of the one of the basil shoots. Looks like it will have a cute little first pitcher soon! 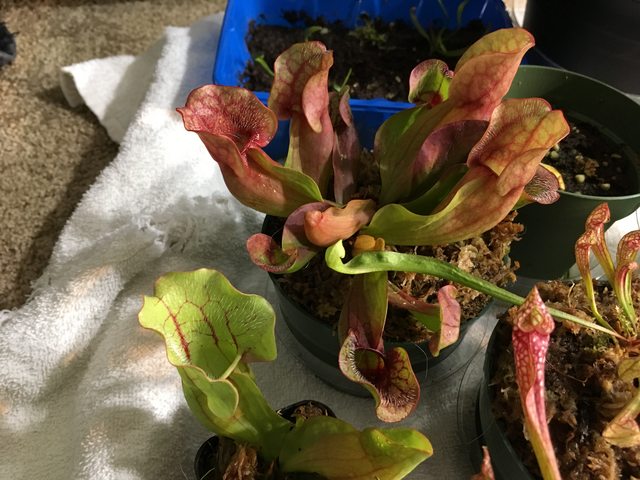 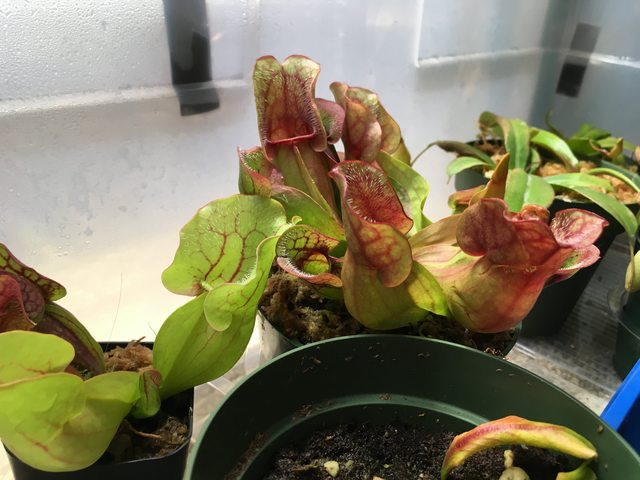 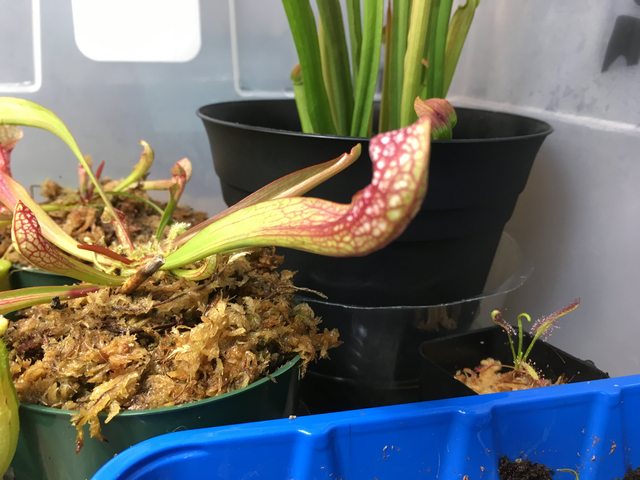 some purpurea and a Scarlet Belle 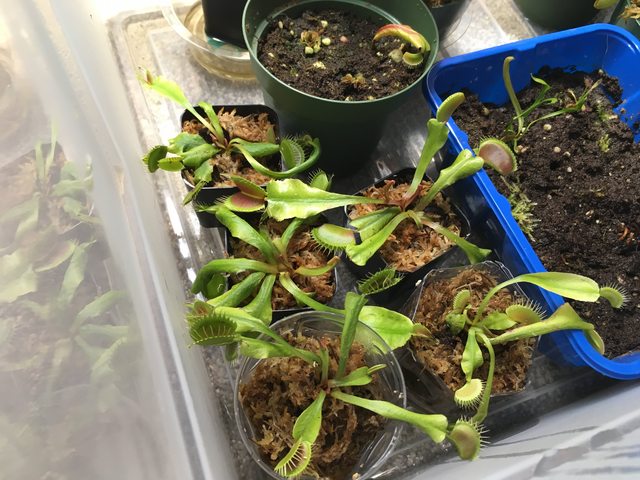 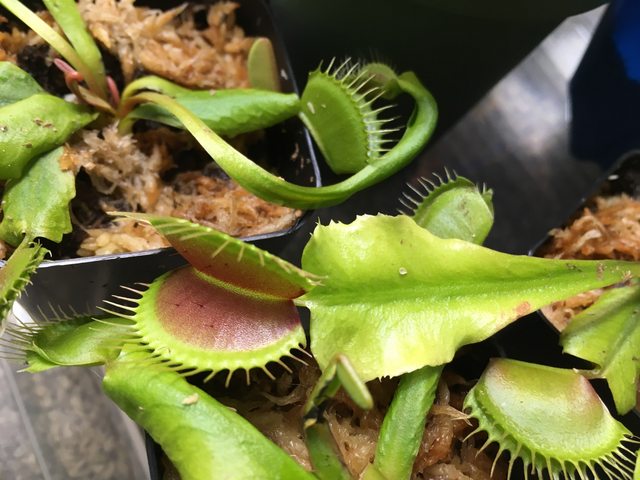 the traps are looking pretty happy, with a lot of new traps forming and good coloration.
I would like to raise that nepenthes to the size of my first one, but if it dies, I guess I will learn to re-pot your plants immediately.
Thanks for all the help!


Grey Moss said:
I'd agree that it looks a bit more like cold damage than rot. In root rot you'll see the leaves blacken from the stem outwards. Your damage is coming in from the margins. However, keeping neps a bit dryer is never a bad thing. Especially if you find you're squeezing stagnant water out of it.

Sent from my VS500 using Tapatalk
Click to expand...

Since I made those posts a while ago, they have done much better! 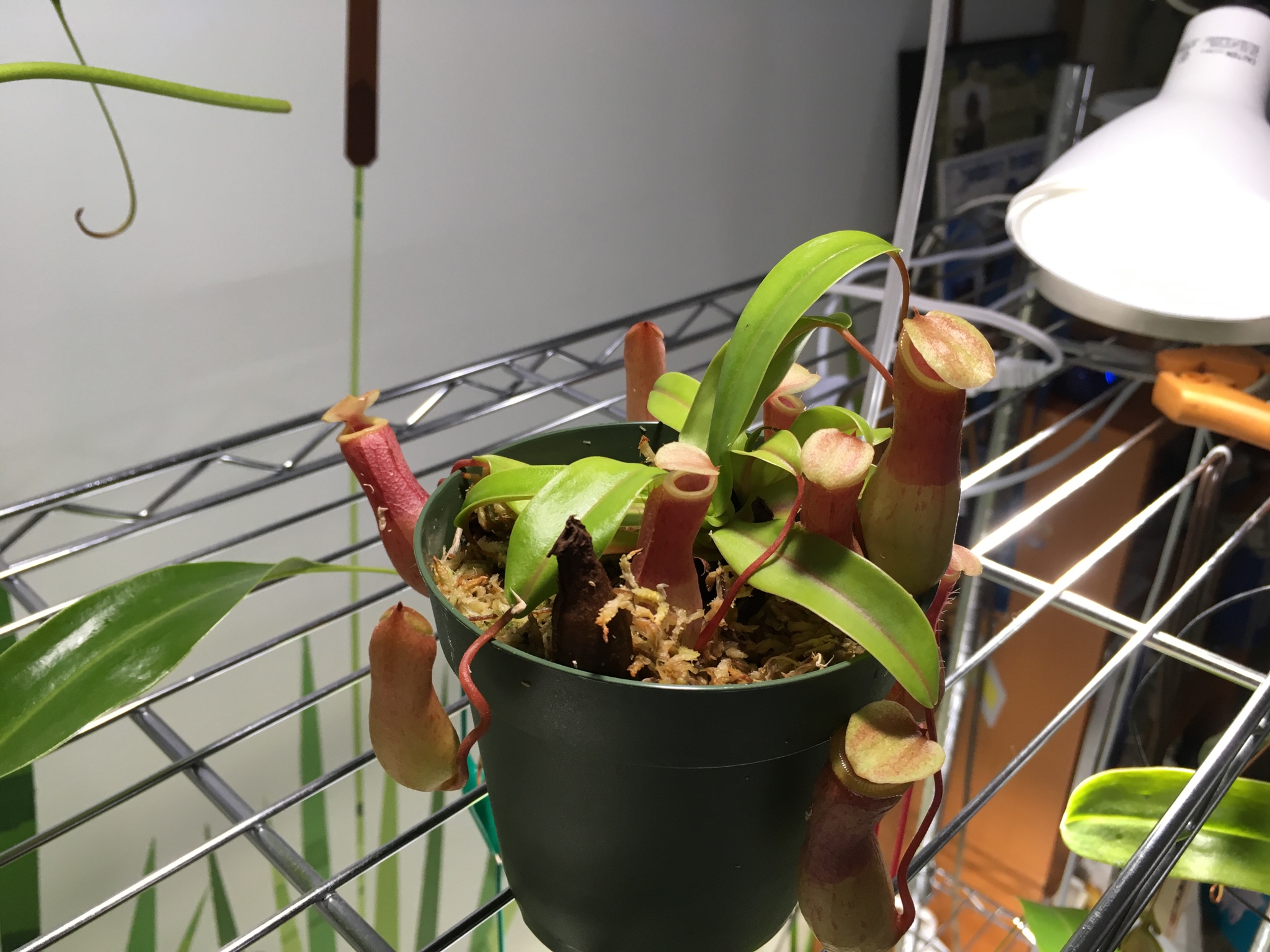 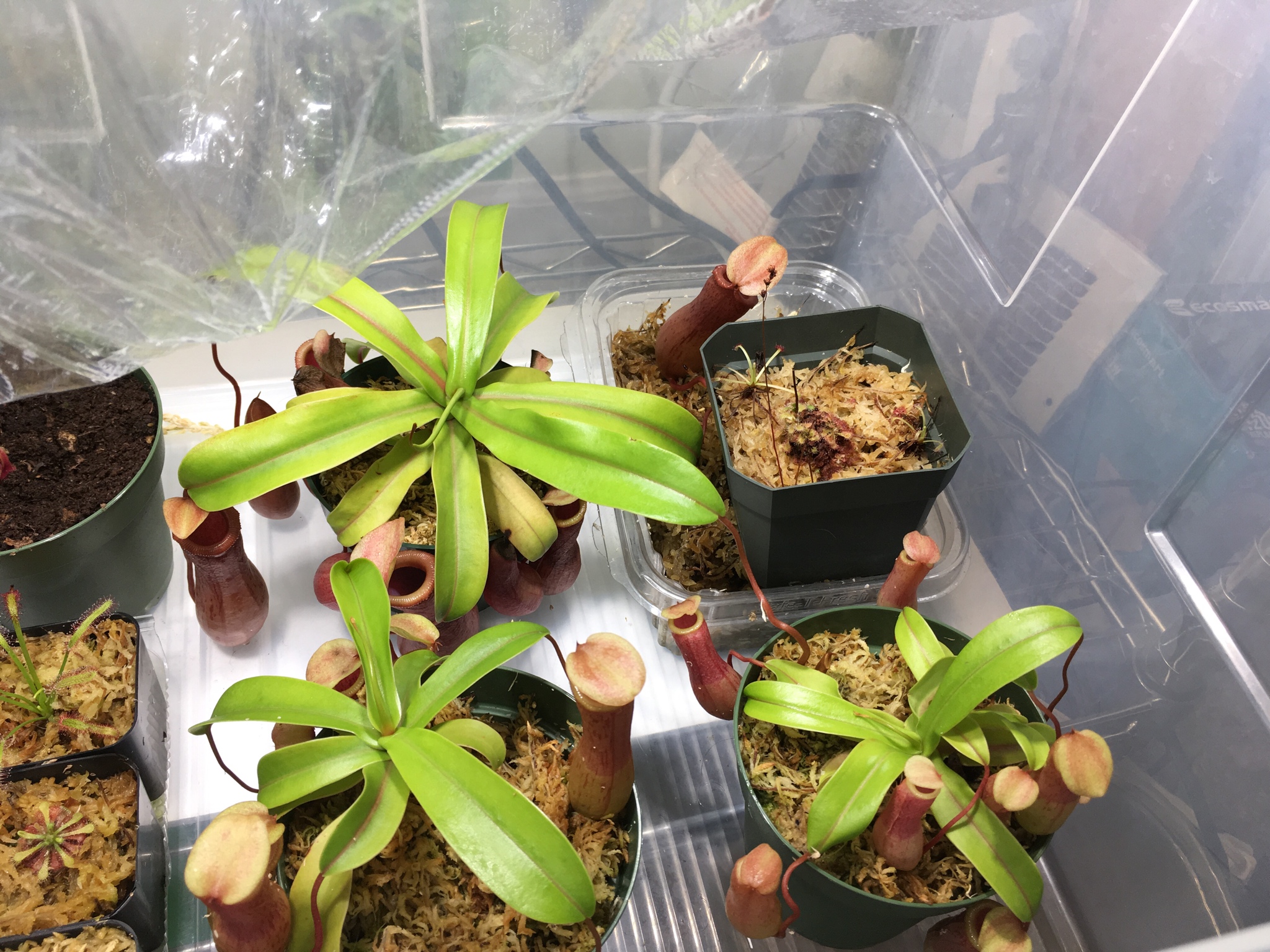 Nice, they look much happier now.
You must log in or register to reply here.