Hi everyone. First, apologies for yet another "how do I keep my plants alive" post. I have had a search around, but I get the impression that there are so many variables, and every case is a little bit unique in it's own right, such that maybe there isn't one solution for all problems.

Anyway... a friend recently sent me some Nepenthes from Malaysia, consisting of 1 cutting and 1 small plant with some of the root (the root was snapped). Unfortunately, many of the leaves also appear to have been bent near the base, which isn't ideal. I am unsure which exact species they are.

Following advice I found online, I took a smaller cutting from the base of the original cutting, using a razor underneath distilled water. I then made a slight split at the base of each cutting, and stuffed a few strands of sphagnum moss in the split. I then planted these two cuttings in a mixture of roughly 1/3 sphagnum moss, Perlite, and horticultural fine sand. With the plant which had some root left, I did not cut that, I just planted it as-is, in the same type of mixture.

I have put the pots inside a germinator, which I have rigged up to control temperature and humidity, using a Raspberry Pi and some hardware. I've also put an LED grow-light on top.

Apparently this is a lowland species (that's where my friend lives), so during the day I maintain a temperature of approximately 30c, and a humidity of around 75-85%. During the night I aim for around 24c, with higher humidity of >90%. The LED light runs for about 12 hours a day, all through the day.

I potted the plants up about 2 weeks ago, and unfortunately the whole plant with the root has turned mostly brown, with only a small section of green left. The smallest cutting appears to also be turning brown, with one of the leaves already brown. It's difficult to tell what's happening with the larger cutting though. I think it may be turning brown, but if so, very very slowly.

I would really appreciate any advice on what I could do to improve the chances of any of them surviving! Also, do you think the larger plant, which is mostly brown, is recoverable?

Many thanks in advance. 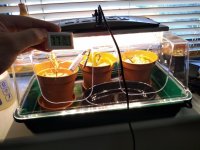 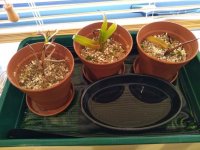 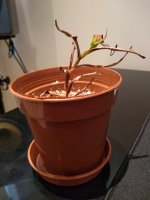 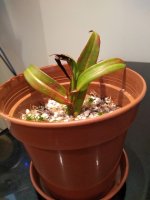 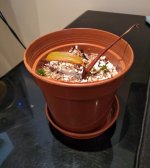 Sometimes with Nep cuttings they look worse before they look better. Nothing jumps out to me as wrong, so as long as you keep the media quite damp and give them stability and time, you'll have your best chance. Yes even the worst looking one can recover. I've had Nep cuttings completely lose their growth or be a cutting with no growth for months and then a node activates and new growth pops up.
Good luck!

Take this as an example: FINALLY some growth out of this N. ventricosa "Porcelain"... And that's a plant that froze and killed off the growth but already had roots... So imagine a stem that is trying to grow roots as well as leaves. It takes time, but generally they're pretty quick and efficient at it. (Unless the plant is known for being picky or a slow grower)

All your technique and conditions look fine if a bit hot. Maybe lower your heat to 26 or 27. However those have traveled a long way for cuttings and spent a lot of time in transit. That's going to knock down the sucess rate a bit. Also, I've been told wild collected cuttings are much harder to root, which those might be.
A

Andrew, Grey Moss, thanks a lot for your replies, I appreciate it.

I'm really pleased to hear that I don't seem to have made any major errors, and have more-or-less the right sort of environment. Very interesting thread there - it's promising to see examples of them bouncing back and then flourishing. Fingers crossed!

Thanks for the thoughts on the heat, I think I'll lower that a touch. Yes they are wild cuttings - my friend is lucky enough to have them growing at the end of his garden in Borneo, he lives in the Sarawak area.
You must log in or register to reply here.

Cause of black in Nepenthes stem?

I
Nepenthes madagascariensis not growing/ pitchering