There are a number of klossii clones about to hit the shelves in a few months. I was just checking to see if anyone has more information about the clones. It seems there's not a guarantee with any of them being pure but some clones may have a higher potential then others.

What have you heard? And which would be the best if any?

It's entirely a calculated risk. The plants which Borneo Exotics has in its possession are far too young, for the time being, to determine whether they're truly species or naturally occurring hybrids; and N. klossi is sympatric with N. maxima where at least some of the source seed had been collected . . .

As far as I'm aware, BE has given each clone a rating for its potential to be pure. The more expensive a clone is, the more likely it is to be pure. Unfortunately I don't know if any of this information has been published - it may only be available to BE importers and it depends on them whether they will publish it or not.

nimbulan said:
As far as I'm aware, BE has given each clone a rating for its potential to be pure. The more expensive a clone is, the more likely it is to be pure. Unfortunately I don't know if any of this information has been published - it may only be available to BE importers and it depends on them whether they will publish it or not.

I also saw that chart and designations of "very high" to "fair" to "unknown" strike me as being fairly arbitrary . . .

I'm sure those designations are based on examination of the plants at BE. It's hard to say how accurate they are at this point and it certainly is a gamble dropping the money on any of these clones.

nimbulan said:
I'm sure those designations are based on examination of the plants at BE. It's hard to say how accurate they are at this point and it certainly is a gamble dropping the money on any of these clones.
Click to expand...

The only issue that I have with that, is that some Nepenthes species -- full examination or not -- can exhibit juvenile characteristics for years at a time. If you recall, some N. macrophylla, which had been on the market for quite a while, turned out to be hybridized; but were only revealed as such years later, since the species can be glacially slow under cultivation . . .

From the pictures I've seen, I'd say BE's assumptions are fairly accurate. Obviously it's still a gamble at this point but some of them, especially the clone 210, looks to be pure to me.

Honestly, I agree with Ryan G's assessment, that most look good to be pure klossii and BE is just covering their butt in case one or more of the clones end up being hybrids. I personally have a 210 reserved, and will be posting plenty of pictures as it grows. Hopefully, everyone else who has these coming will posting pictures!
Last edited: Jul 27, 2017

These are certainly exciting times for species enthusiasts.

I wasn't quick enough to get the 210, but I have a clone 260 reserved. Pretty excited about it all, and yes these are good times for us nep lovers

Figured I'd just bump this thread rather than create a new one.

Just received my little clone 210 in the mail and I have to say, I haven't been this excited to get a plant in quite some time! Anyone else receive theirs yet? 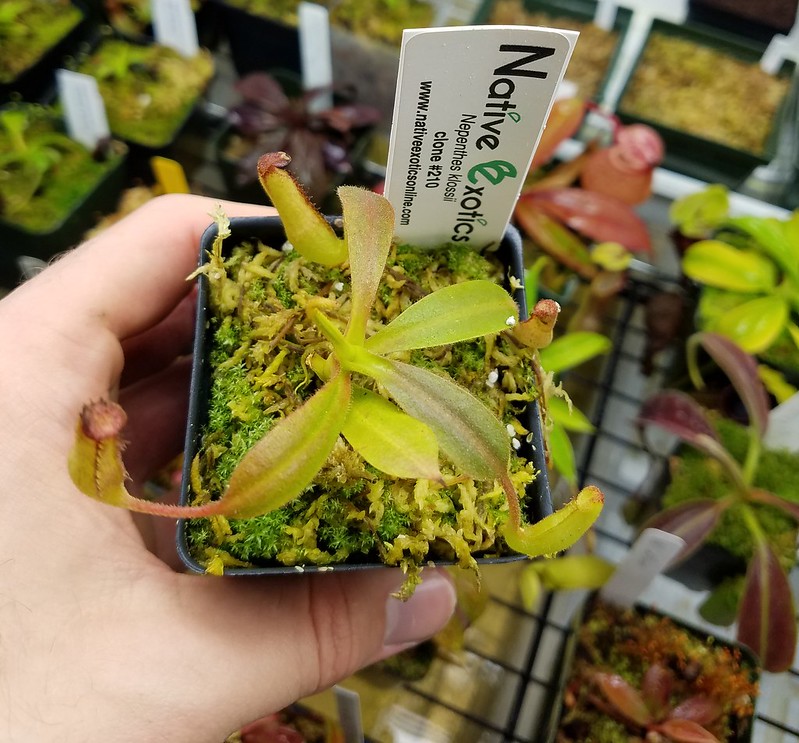 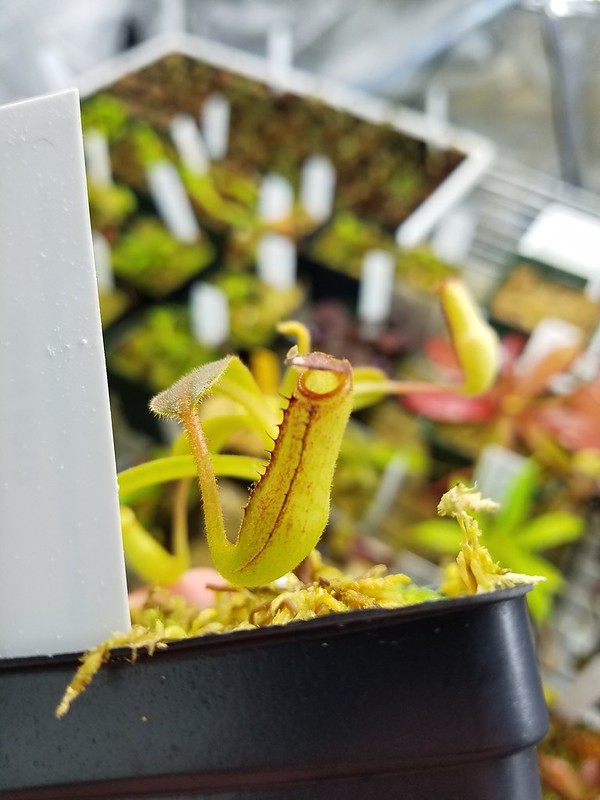 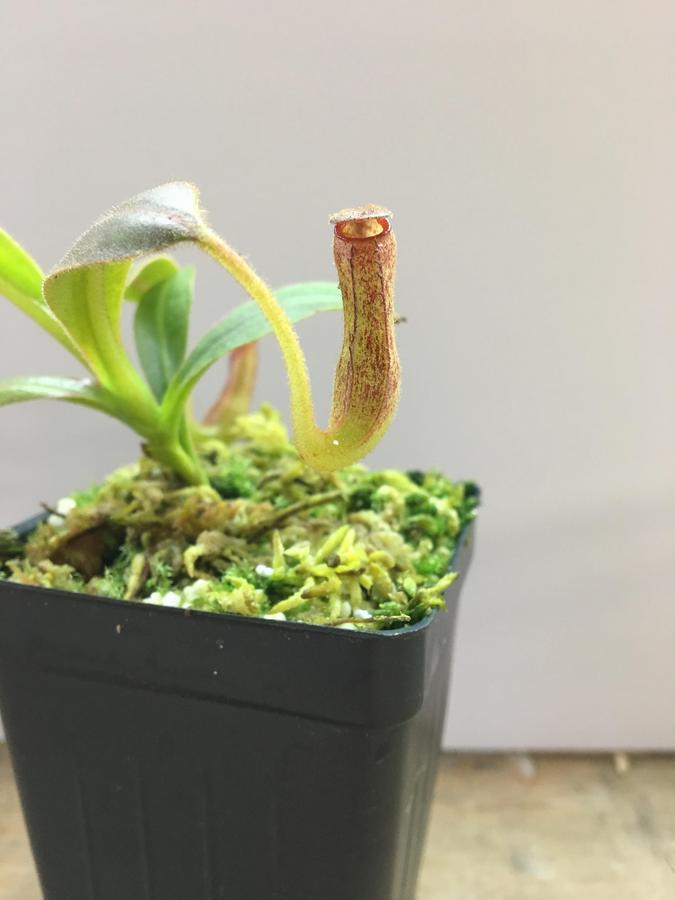 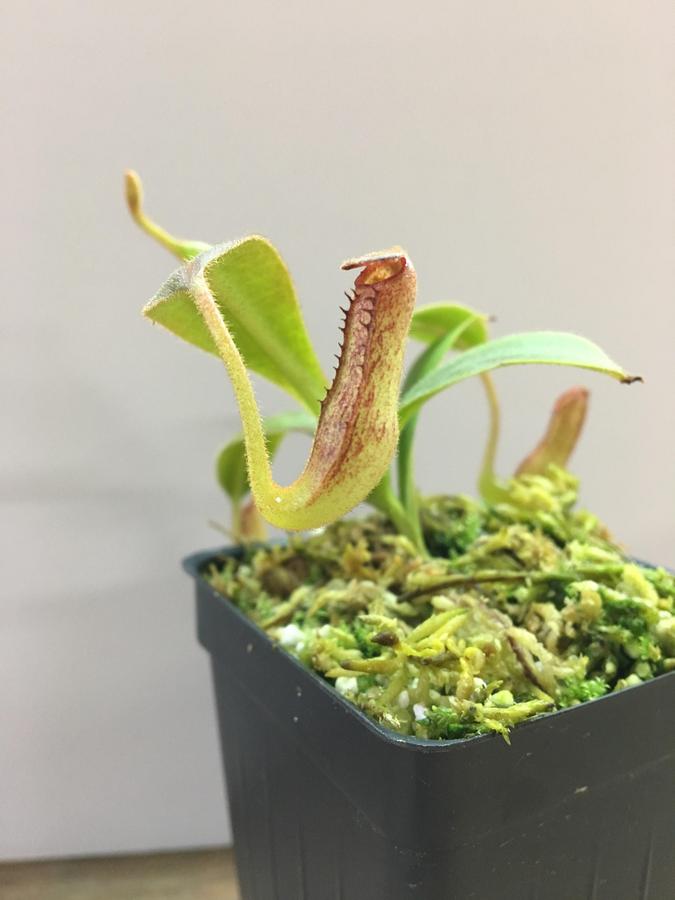 N. klossii has been making an appearance online for sale but the clone numbers are not the ones discussed and shown here. Is there an update to the list of clones and their probabilities?

swords said:
N. klossii has been making an appearance online for sale but the clone numbers are not the ones discussed and shown here. Is there an update to the list of clones and their probabilities?
Click to expand...

I noticed this as well but haven't seen any explanation as to why the numbers are different. My guess is that these new ones are possibly an assortment of other clones they have in microprop but didn't individually number like the 'selected' clones. Just a guess, but it seems they do this quite often with their other species/hybrids.
Last edited: Dec 27, 2017

It's just that in this case one could end up spending $400 on a maxima hybrid.

Is there no confirmed klossii clones yet? I dd see one seller claiming to have some but they weren't the ones they were selling.

As far as I'm aware no clones have been confirmed pure yet. It's only been a few months since the first batch were sold anyway. Every vendor seems to have gotten a different selection of clones so I'm sure there's a ton of them floating around.

I wish BE would keep an official database of their Nepenthes clones but unfortunately their Availability pdf seems to be the closest they've gotten -- and since their N. klossii release was so limited, it fell completely on the retailers to disseminate any pertinent clone info. I hope wrong information won't be spread but I feel like it's inevitable with the lack of an official release or newsletter to clarify all the new clones.

That being said, I've been trying to figure out what's going on with clone numbers as well.

Old clones:
Clone 2 (BE-3502) was released several years ago; this is the "lost" clone, after a limited release the line was said to be lost in an electrical fire. I think this is the more common clone as Tony P sold some of these in the US.

BE-3452 is a single clone according to Catalano's Code Database. I don't know when or for how long this clone was sold, presumably it was before clone 2, and presumably it was also lost from commercial production.

BE also dispersed some seedlings non-commercially starting in August 2009, from these there are some N. klossii x maxima. Recently there was a claim on an eBay listing that BE only had one hybrid from all their seedlings and clones, but the long short of it is that several growers and BE have grown out N. klossii x maxima from the seedlings so I'm really skeptical of the claim.

Other clones I've seen include 22, 230, 237, 254, 256, 257, 264, 260, 268, 271, and 272 -- I don't know which batch number any of these clones correspond to, if any. I don't know how the batch numbers were determined; they could be based on BE's confidence of purity (wild speculation, don't quote me on this) or they could be for commercial record-keeping purposes. Something I really don't like is the mix of two and three-digit clone numbers. Congrats to BE if they have 270-odd individual cultures of N. klossii in the lab, but it's way too easy to confused 21 with 210 when labels fade or when someone tries to sell one for the other...

It's great and completely understandable that BE includes a hybrid disclaimer with the new release, but word of mouth recently is that these clones are duplicates -- Rob himself said on Facebook that,

"True, we had a terrible electrical fire which did us massive damage. However, we have worked for years, attempting to save some contaminated N. klossii which we were keeping in a different part of the lab and we think we have now succeeded. We are growing the plants out now and if we are right and the saved clones are true N. klossii and not the maxima hybrid, then it will come back commercially. However it will still be a while and the supply will be tiny for some time to come" (28 February 2017).

If the clone numbers really do refer to each new isolated plate, many of these newly isolated and relabeled clones of clones are actually of the exact same source clone/clones. On the one hand, redundancy means obsessing over these new clone numbers is a waste of time; on the other hand, it makes tracking the clones a heck of a lot more complicated. Because of BE's lack of transparency with the release, we can't ever know until they issue a statement!

I was going to get one of those that Tony P was selling years back but I think I had gotten laid off just before was why I didn't get one. I remember him telling me they were ready along with the N. pervellei I was after, so someone else got those.

So apparently BE-3452 is once again back; curious to see how the price will compare to our newer N. klossii...

I am perplexed why the re-release of BE-3452 wasn't announced with the BE-3773 to 3776's, I imagine lots of people would rather buy a confirmed true clone than our questionable mystery clones.
Last edited: Jan 5, 2018

The reason it wasn't announced earlier is simple, so the new unconfirmed clones would sell.

I, for one, would have never bought my 210 if I had known this was on the horizon and I'm sure many others would have done the same. The new clones would have been tough for them to sell compared to a confirmed clone if they were released at the same time.

I'm still a bit confused as to where this one came from. I thought I had read that BE lost all their old klossii stock in a fire or something, I guess that wasn't true?
Last edited: Jan 5, 2018
You must log in or register to reply here.

What are you considering offering for bid in the 2022 NASC benefit auction?

Need help with my flava.

Pitcher of the Month September 2022

Pitcher of the Month August 2022