Well, I've been doing (in a small way) CPs for four or five years now and having relatively good success, except my drosera choices have all been fairly short lived, say a year or maybe two. I'd like to seek recommendations for one that would get bigger and better each year with windowsill culture and summer outside.
Pitcher plants, venus fly traps, hardy drosera have all done well outside for me and generally mexican pings do well for me indoors, though I think lots of rains last year weakened and ultimately doomed a moranensis for me. I have laueana and an specified hybrid that I'd say has moranensis in it's background flowering happily at the moment.
Anyway, any drosera recommendations with longevity in mind?

Drosera capensis is a long living good choice. It is readily available, easy to grow, active, and becomes large and showy when mature. It has several varieties, all are worth cultivating.
Good growing,
Mike

What species have you tried and failed with ?
H

D. burmanii and indica families are annual. Even though we could extend their lives by heavy feeding, eventually they will decline and dying.

D. venusta, nidiformis, spatulata variants and some others, while they're supposedly perrenials, they have tendency to keep sending flowers until they exhausted and die.

D. burmanii and indica families are annual. Even though we could extend their lives by heavy feeding, eventually they will decline and dying.

D. venusta, nidiformis, spatulata variants and some others, while they're supposedly perrenials, they have tendency to keep sending flowers until they exhausted and die.
Click to expand...

Everything in that last line are perennial, if they are flowering themselves to death there's something stressing them in their conditions that needs to be altered.
H

hcarlton said:
Everything in that last line are perennial, if they are flowering themselves to death there's something stressing them in their conditions that needs to be altered.
Click to expand...

I know, that why I said supposedly perrenial. Even carnivorousplants.org said that some spatulata variant has tendency to keep flowering themeselves to death. It make sense actually, at their native habitat, spatulata experiences hot & drought periods, thus whenever the conditions support them, they'll prioritize flowering until they exhausted.
It same with venusta. Unlike their neighbour d. capensis (who live at permanent wet place even at dry season (swamp or seepage), venusta grow at more drier places, they only have water at wet seasons.
For example, my longest lived spatulata is the one that doesnt get enough lights and food (aka indoor), they only have 1 or 2 small flower stalks at time. The others who live under sun had lot of large stalks and flowers, but short lived.
Last edited: Feb 26, 2021
D

Drocera capensis x 4(forms), aliciae are the ones that I have had. Typically they grow fabulously the first year for me, then less so, and after about a year or so, begin to decline and within the next few months depart their mortal coil. If I were having to make wild guesses, it would be similar to the reaction of a plant that requires dormancy and isn't getting it.
Conditions that I'm growing in are southern windowsill, always moist, though a bit less so during winter. Being as they are on a windowsill in winter, they may get fairly cool though the house itself is set at 68F. Distilled water of course. I put them out in summer, and they reap quite a bounty of small gnatlike insects.
I'm an experienced horticulturalist for what it's worth and have grown (non-carnivorous) plants all my life. Various from cacti/succulent, orchids, african violets, various other tropicals. That doesn't mean that I'm not doing something wrong, but I do read and research.

D. Adelae will not let you down. It looks great green or burgundy and if light hits a root you get a pup. I grow it in lowland, intermediate, and windowsill conditions. Its weedy, and I love that about it. Great starter Drosera. 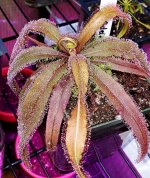 That's a pretty thing (for a sundew)...I will consider acquiring one (postage so high..argh). Frankly, if it didn't have the dewdrops, it would look like a 'normal' plant (lol). And I do love how many bugs my sundews catch.

I've got D. regia and D. venusta that are at least 12 years old. When repotting I trim off all the dead leaves and bury the stem up to live leaves.

I have found that often when a plant starts to fail repotting it will bring it back to health, for some reason. There are all sorts of possibilities but when I don't know why the health of one of my cp's is collapsing this is my first response.

Repotting seems to help most of the time. Perhaps the peat moss was breaking down or algae/bacteria growth. Sometimes I find the inside walls of the pot are slime with algae.
D

That makes some sense. Many plants respond to fresh media well. I kinda ignored that because they're bog plants and their 'media' in nature would be anaerobic...so I was thinking it would be tolerant. But maybe not?

Most carnivores are not actually the in-the-soaking-soil bog plants; the ones that are often live in places where water is moving through the bog so it's not hugely anaerobic, others live in seeps, sandy soils, sphagnum well above the anaerobic peat, etc. where there is plenty of aeration. An anaerobic soil will kill many species, or at the least make them very prone to rot.
D

And in essence that's probably what I've been doing to them. Poor things.

Some species do well with regular to occasional top-watering, which tends to flush the soil and restore oxygen levels. I do this in addition to having the pot in standing water in a tray. Letting the tray empty for a day or so before the addition of more water can have the same effect, if the plant will tolerate it without wilting. Some will and some won't.
You must log in or register to reply here.