looking for Aristolochia Chilensis seeds or plant/seedling for trade!

I have a small cup trap vft for trade to try and get Aristolochia Chilensis seeds or a small plant/seedling
Or i have some nepenthes reinwardtiana seeds still to offer and a variety of cacti/succulent and mesemb seeds readily available just ask and if i have them ill gladly let u kno and throw in a few bonuses! This is a really interesting plant i would love to study with the kids so i thought id give it a whirl to see if anyone may have it
K 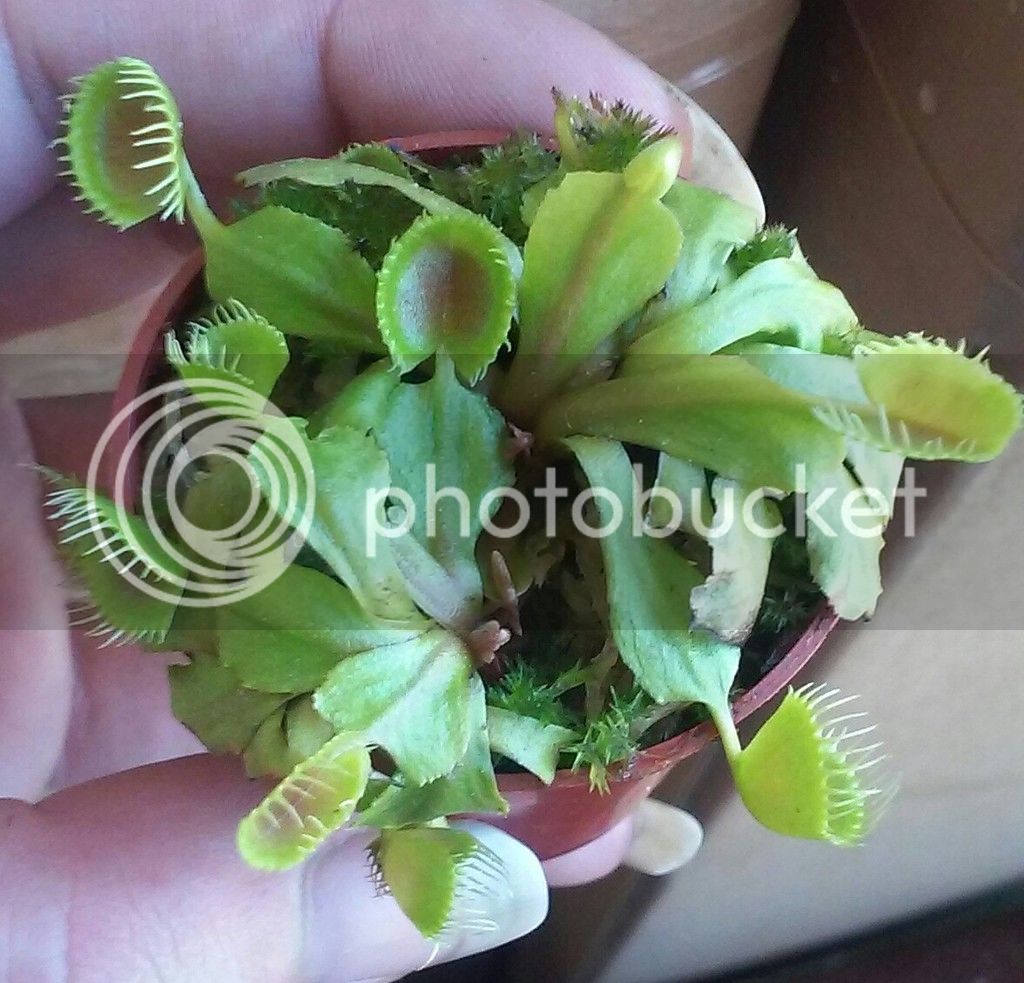 I might have a plant--I'm still figuring out what to do with it. Right now, it lives at my mom's, and I don't think she's particularly attached to it. I/we have had it a couple years and it hasn't bloomed yet. It did have small buds at one point, but it lost them, probably due to inadequate watering. I think it might make sense for my mom to replace it with something more interesting. However, I give her a lot of plants, and in general she wants fewer, not more. It was actually supposed to be at my mom's temporarily, and go to my sister. However, my sister is pretty anti-plant at the moment. I do think it should go in the ground, as our climate is very similar to where it's from. So the fate of this plant is uncertain.

I'm not convinced A. chilensis is the best choice of an Aristolochia for kids. There was a post on one of the Aristolochia forums asking whether anyone had success with the plant. One of the best growers in the world showed a picture of a tiny bud and said "I still have reason to hope". A. fimbriata is the most reliable bloomer I've grown. It's small, cute, odd. But small... It also makes tons of seeds. Certainly some of the others are more dramatic, including A. gigantea and A. macroura. I think how long they would take to bloom depends a lot on one's conditions. A friend bloomed A. gigantea in her apartment in Boulder, so they can bloom in surprising environments.

I just started a large number of cuttings of A. macroura (already rooting) and I have seedlings (tiny) of A. chapmanii (I've been told those are actually not A. chapmanii, as claimed by Butterfly World), seeds of A. fimbriata (from my plant, last year), possibly cuttings of A. gigantea, and then the possible A. chilensis.

I would be cautious about trading for A. chilensis seeds unless there's strong evidence they are viable. I think there are a lot of inviable seeds out there. My plant was originally from Annie's Annuals.

Here's A. macroura, although I don't know whether the clone I currently have is the same: 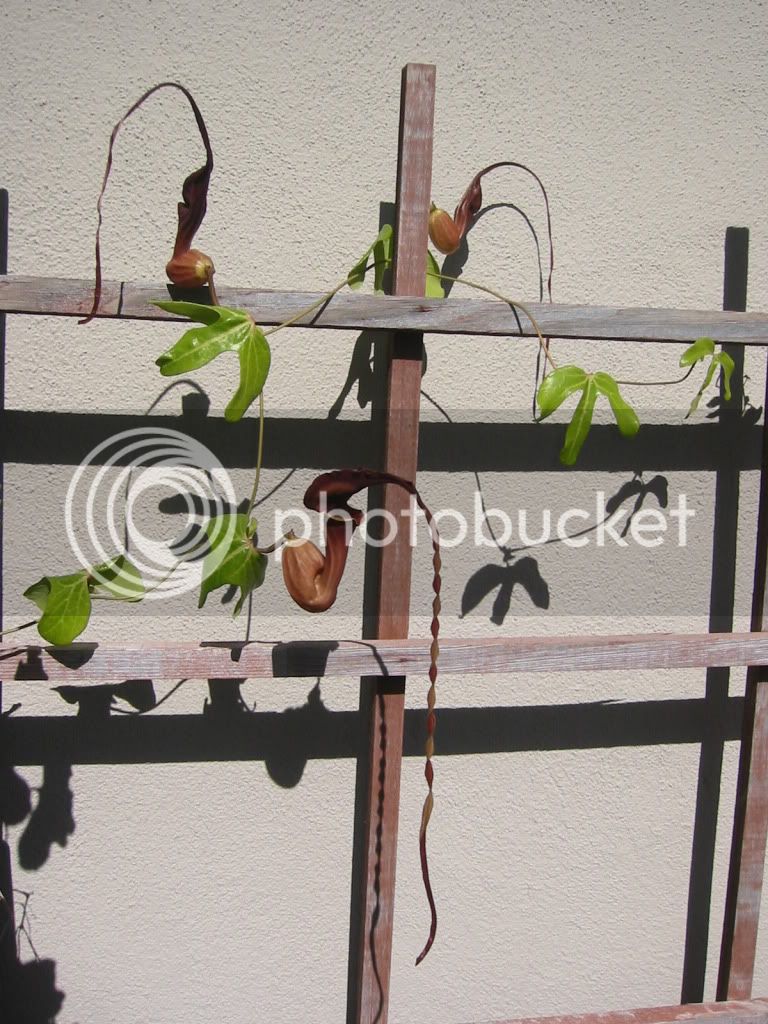 And one of the forms of A. gigantea. If I can spare a cutting, I think it would more likely be a small one, from an A. gigantea brasiliensis seedling.

These can get 10 inches or so. It's the clone a friend bloomed in her apartment. 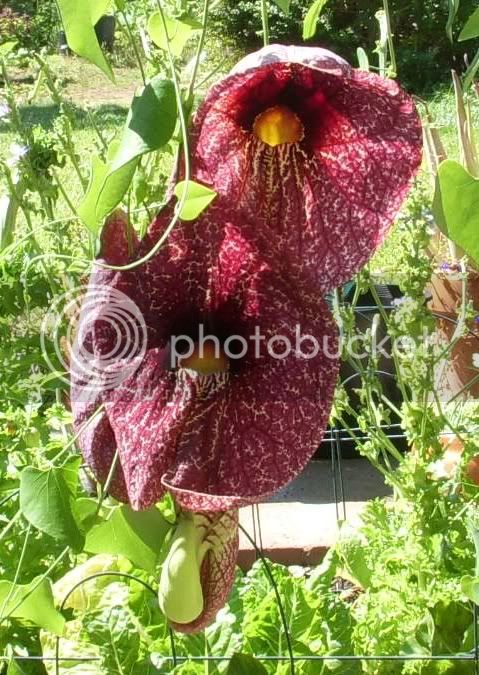 Just to clarify, here's what I could do, if you have any interest in other Aristolochias:

For postage (probably $4 First Class Parcel, or $6-$7 Priority mail) I could send the following:

A. gigantea The one above, with 10 inch flowers (Kartuz clone)
A. gigantea brasilensis (even larger flowers)
UCBG Aristolochia (probably something like the Kartuz clone x A. elegans)

Each piece of the above would be enough for 1-2 cuttings, and they need bottom heat in saturating humidity to root. I root in perlite.

A seedling of "A. chapmanii" (or whatever it is)

Seeds (last year's) of A. fimbriata

If the A. chilensis needs to go and is added, that would change things a lot.

Here's a picture of the UCBG Aristolochia:

I also had been looking A. forfimbriata i love the cute flowers but haven't had luck finding one in good health. I bought one before from a trusted online store but, the post office lost the pkg for weeks and it was dead by the time i got it and the seeker was unwilling to replace it.
I really like the hairs on the chiliensis and the shape of the flowers look like a furry cat ear. I have personal intrest in this plant and am always willing to share and such learning purposes and studies with the kids but I'm prob morely going too share it with older kids in the group cause all parts of the plant is poisonus so im kinda iffy on having younger kids around it if i get one until they get info on the plant first and dos and donts like we do with other plants that poisonus in any way that we study or grow.

I would love to make a trade for other types this is deff a unusual plant species that the kids would love and i would personally like to study myself, i don't know if id be able to take on unrooted cuttings cause im having a hard tine finding a heating pad for seedling for my barely there budget for the program and myself to use to sow seeds or reroot some other plants that need bottom heat ive looked on ebat/amazon abd a few other sites and im currently saving up for a cheap one that would provide enough heat needed to have the plants/seeds/cuttings benifit. If u pm me maybe we can work something out to ensure they arent sent to just wither away, cause id rather have them go to someone who could give them the proper care they need to root properly.

If u pm me maybe we can work something out, either a hold to ship until i get a heating pad or when they are rooted cuttings and if yr mom and sister decides to give up the chiliensis to me or keep it to hopefully get some blooms this year. Please pm me to talk furthur and thank u for yr response and offer it is a very kind offer and appreciated very much!
K

And yr pictures (if they are your plants) they are beautiful

P.s: i checked out annes and they are out of stock of chiliensis and the prices were kinda steap for me at the time unfortunatly
R

Those are my plants, although a couple are not exactly the ones I have right now due to moves, etc. For example, the A. gigantea, which was originally from Kartuz. After growing it for several years in a pot I sent a cutting to Grassy Knoll Exotics, who later gave me back a cutting. It's now in the ground, and I'm hoping it will bloom soon.

The part where Annie's gets people out of the area is on shipping, which starts around $25, I think.

I agree postponing would make sense if you don't have the right equipment. The vines will grow significantly over the next few months, fresh A. fimbriata seeds will be ripe, and so on.
K

So sorry i was wondering where this post went and looked thru other parts of the forum lol and go figure it was on the 2nd page of this one! - thank u for understanding the situation, i myself have recently moved and still havent unpacked everything and got comfortable and my limited funds are making it quite hard to get the new greenhouse/sunporch to where it needs to be or should be at the moment. Its unfortunate cause your offer is too kind and is very much appreciated but we can deff talk when i get myself outta this rutt im in. And id gladly send you some neoenthes seeds in exchange for u to hold them for me till i am able to take them off yr hands, just cause nepenthes seeds have very short germination and are best to sow quickly. Seeds could be sent now , even rooted cuttings (would need to find some spare money for shipping of course) but id have to wait on the unrooted ones till i get something to supply the needed bottom heat so they arent wasted
K

I even may have some crossed vft seeds to sow and share soon aswell, i do have a seed trade list up if u have intrest of anything on their pm me i nust may have enough to share nust because on some species listed and id rather they not go to waste!
You must log in or register to reply here.

Looking For (trade) Ping. calderoniae to trade for P. heterophylla or medusina

A
For Sale or Trade: Assassin Bugs and Isopods