My female N. (ventricosa xx tiveyi) x truncata currently has a full spike of open female flowers. I was just going to skip this spike for any pollination because I only discovered that it was female when the flowers began to open (I had thought the flowers were male when I first discovered them and the consensus was that they looked male). However, the flowers have lasted longer than I thought they would, and I've just discovered today that the plant decided to make another spike.

So since I've got a whole bunch of female flowers presently and in the near future, and no fertile male plants big enough to flower, I'm looking for pollen. Standard deal, if pollination is successful, we split the seeds 50/50. I'm open to anything, but preferably something with stripes and/or a flared peristome, such as platychila or a hybrid with similar characteristics, or something with some teeth like a hamata hybrid. I'm looking for characteristics that I think would compliment and improve upon the plant.

Here are some shots that display the physical characteristics of the plant. 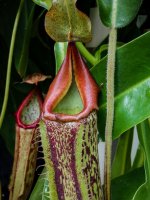 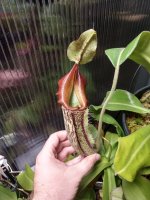 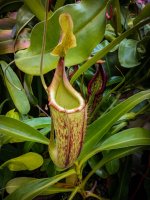 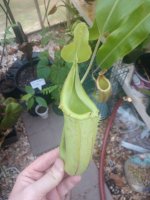 It's an incredibly easy plant to grow, but doesn't grow pitchers or to it's best without higher humidity.

I have some Thor. x hamata and Thor. x aristo pollen if that would interest you?

thorelii x hamata looks like it could be something that pairs well with this, and I can't help but wonder what the aristolochioides influence would do. I'd be interested in both.

Anybody else have anything? Plenty of flowers for pollen, she keeps making more spikes.
You must log in or register to reply here.

Looking For (trade) Pimpin' out a nepenthes