Well, moving day is indeed as bad as the rats of NIMH have led us to believe!

I was hoping I could find the couple of pics I took of the inside of the rental to get my plants from West to East coast of the US but they were lost in the move. Lets start at the beginning chronologically, shall we?

After a decade in San Diego, it was definitely time to move on. It was good for what it was, but I needed 1. not a desert, 2. a yard and 3. seasons in my life among other things. I found an adorable little house built in 1880 in Virginia and got a job start date this January after months and months of waiting. But January in Virginia you say? YES

I realized, nope I can't just get a UHaul type of deal - plants would freeze. I can't even get a fancy packing service either because they bring your stuff to a warehouse, leave it a day or two maybe, change trucks, and cross the country that way. I needed something like one of those nice heated floral trucks nurseries get deliveries in, but good luck finding that to rent. Ok, fine.

Back to the drawing board and this is what I came up with: either A. RV or B. Rental SUV. Option A is a little too unwieldy for me to feel comfortable driving the 40hrs through all of the climate zones in the US of A by myself, and I wasn't sure if the reinforcements who offered up to help me drive over were going to make it. So Option B it is. I decided to Craiglist-hawk my furniture what I couldn't give away, bring only the plants, craft supplies, plant supplies, scubastuff, the 'good' clothes, and a small portion of my books. Oh and the good tea mugs because, priorities! Over the course of from when I got a hunch that I'd probably land the job (last summer/fall) til I landed it for sure, I made a couple plane flights when it was cheap and I had a free long weekend here or there with excess baggage in the form of boxes of books, gigantic duffel bags full of clothes, etc. and slooooowly moved nearly everything over. Right before Christmas was the SUV trip where I rented the biggest SUV money can get - I think it was something like a Yukon XL, and the reinforcements ended up showing up which was a boon for sanity but meant about 3cuft less plant space. I had pretty much just the plants and some bedding to transport at this point. Yes, I was sitting, sleeping and eating on the floor at this point. You do what you gotta do.

Over the course of a half-week, because the longer they're in boxes the more angry they are, I cut ALL the pitchers off my Neps, and boxed all the plants up like for shipping. In the last 24hrs I picked up the SUV and we loaded it up, and then hit the road! Auspiciously we took the Southern route past Adnedarn's house, through Texas, swung through Louisiana and TN to visit a couple friends, and then finally made it up to Virginia. It was hovering riiiight around freezing if not a couple degrees below east of Adnedarn's place so it was like one of those car-chase movies where if you stop moving, the car blows up but in this case, the plants die. We had to have a pit-stop at the friends' houses to wait out sub-freezing temps at my house but finally made it in on a day where the plants would be annoyed but not dead. I need to sort out a greenhouse this coming year the hard part of which'll be heating/cooling because its zone 6b here. I had another good Scuba buddy come over for Christmas while I unpacked all the plants (and threw my back out, of course in the process) and otherwise we did some house repairs, as you do, and otherwise just had a grande old feast.

After the plant transportation trip, I flew back to San Diego one last time to tie up some loose ends and hit the road for good. I left just at the turn of the year in my little Mini shoved full of bedding, a nice big dyson, wall hangings and some of the last of my potting materials, and showed up here just in time to get a nice snow! Since my orchids are ok and not scorching behind the windows here, the sun is definitely weaker than in San Diego so I've finally, after all these years, bought some lights for the plants (for the time being). I don't know if the LEDs are the right ones to be using, but I figure any light is better than no light and at $20 a pop per panel it's not bad. I'll see what my electric bill looks like next month though

Here's some pics under the internet laws of pics or it didn't happen: 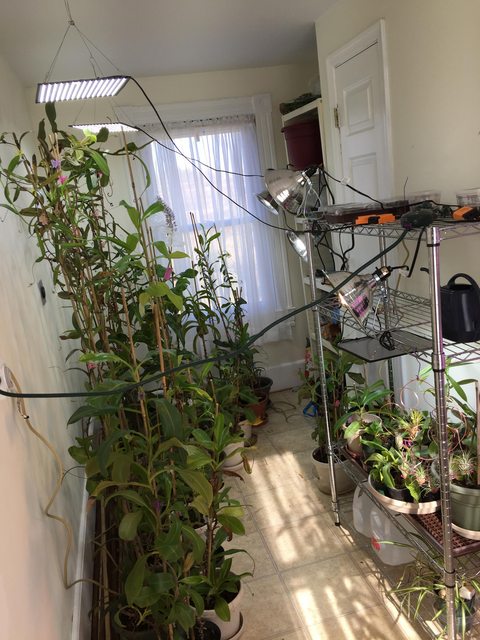 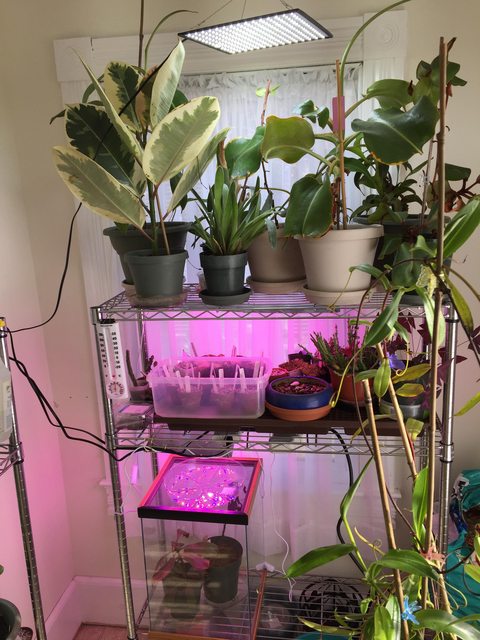 The ones in the hallway without lights - we'll see if they do ok but the pitayas definitely are looking a little etiolated. 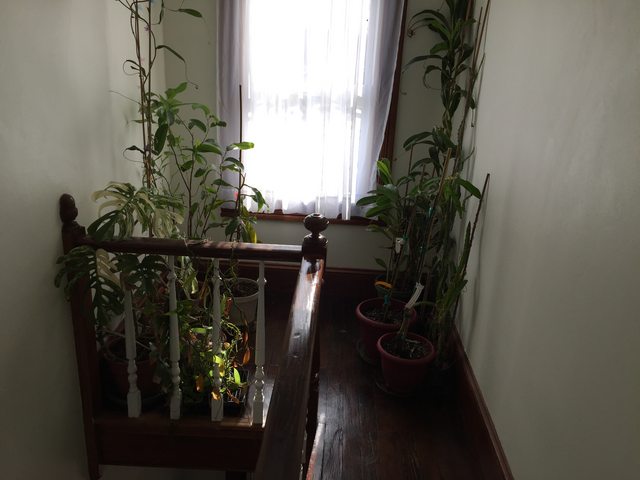 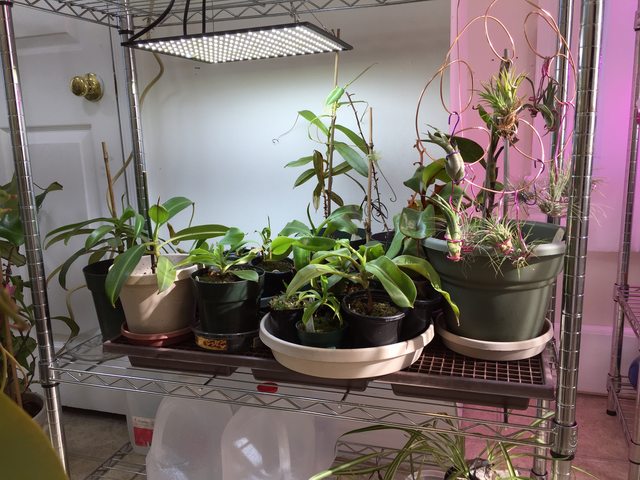 . I suppose they always did in winter in San Diego too, but it's just really depressing. I'm currently getting the septic system sized to figure out where I can veggie-garden to my heart's content next year in the back yard, so hopefully I'll have some really nice plants this coming year

As part of the joys of new old-house ownership, I've seen foxes, deer, rabbits, ground hogs, hawks and squirrels outside. It's nice living somewhere out in nature, but the animal trappers who are wonderfully and aptly named, 'critter gitters' also caught a possum and skunk in addition to the ground hogs, and *inside* I've seen some mice. Because I don't want to be poisoning hawks and foxes outside, I decided to use the old-school snap-traps on the mice and have also gotten permanent mouse-patrol in the form of Mr. Georgie Pie Jenkins: 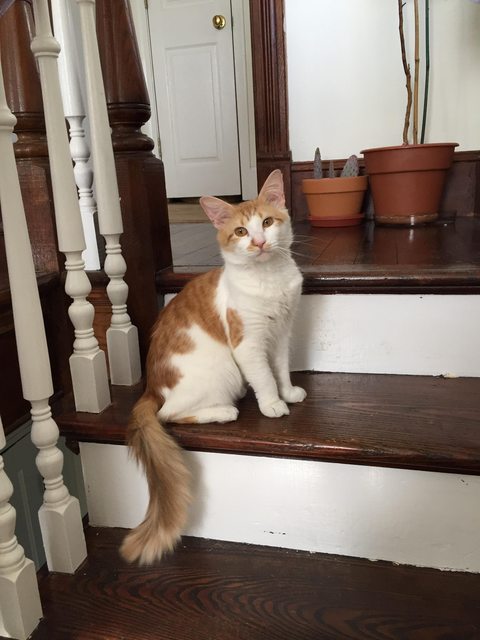 (yes those are the cactuses from you, Adnedarn! And my horribly sad looking cinnamon tree )

He was disgusting when I first picked him up at the shelter, so the 'couldn't take care of him' his old owners surrendered him for is the best decision they ever made imho. The medication's out of the way finally, so he can run around and terrorize his mouseytoys. He leaves the plants alone which is great, but I definitely don't let him into the 'plant room' due to the precarious nature of my now-setup.

Anyway, advice for moving plants:
Cut everything sticky, wet or gloopy off the plants before packing up. Don't use the natural/biodegradable peanuts because they shrink when wet (uh oh! but luckily nothing completely broke). Make sacrifices to the appropriate gods to keep the temp above freezing while you're moving. Bring or arrange to get metal racks at your destination ASAP to unpack plants onto. Have at least 10% more plant saucers and 5% more pots than you have plants for cracked pots, cracked saucers, and sudden water spillages. Have at least 5gal of R.O. sitting around while you're unpacking for sudden surprise bone-dry plants. Make sure you have a pesticide of choice on hand at unpack because any pests you might have had WILL attack your weakened plants asap. Take your time packing because you'll have to do just as much work at the other end to unpack too, and doing that with a thrown back bites.

So, I've got septic system work, a french drain, a backyard fence to put up because apparently housing is going up in the field through my back yard, and once I have the money a bathroom remodel where I'll lose the plant room so I'll need to set up a greenhouse. I'll be busy for years!

Seeing it all in photos I can see how it was one beast of a move. Glad it's all settling down now. By the time summer comes your house will be full of pitchers

I already knew most of the story because we've been in contact, but it was still a great read and I felt like it was my first time hearing most of it.
I have a chaniana, but probably waaaaay too small to expect any type of cutting from in any type of near future (a few inches across still) BUT! I do have that chaniana hybrid that I offered you pollen from that I believe I saw a basal popping up that I'd be happy to chop and send you when you (and it) are ready to do so. 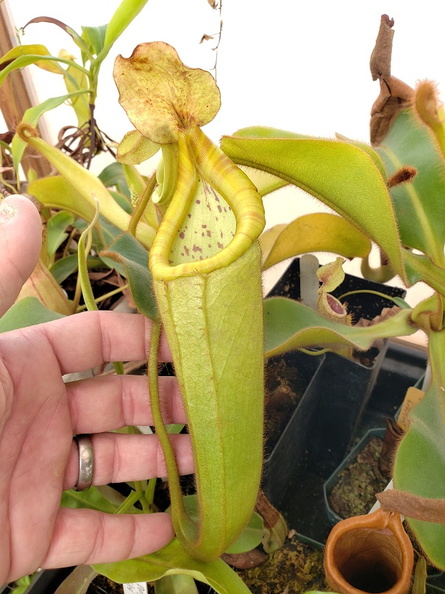 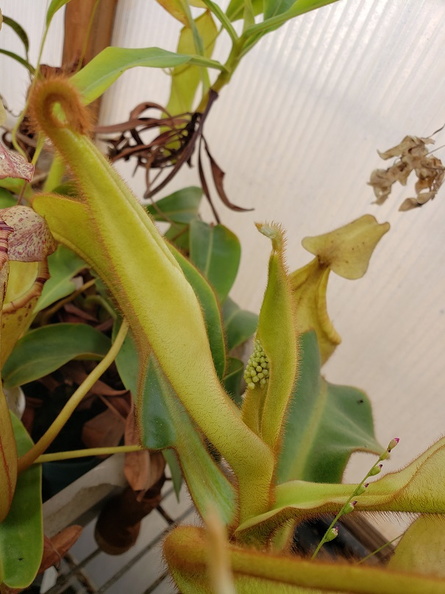 I can see the murderous tenancies of that kitty in his eyes. He's a cutie! He'll be a great friend to a bengal. (eventually)

Hope your back is doing better!
Andrew

PS That cactus pad that fell on the ground has not sprouted yet... I left it there in case yours fail I'll have a plant I can send. hehe

Wow great and harrowing read (cut off ALL the pitchers?! [emoji33])

humanbian said:
Wow great and harrowing read (cut off ALL the pitchers?! [emoji33])


Sent from my iPhone using Tapatalk
Click to expand...

Yeah, I didn't want them sliming up the whole car. It

and I had just 2-3 pop open since so I've just got a room essentially full of pothos at this point. I hope the lights help with pitcher production

Wow, it's amazing how well your scale model of Southeast Asia, managed the trip East.

Virginia has no idea what has just arrived within its borders . . .
Last edited: Feb 25, 2020
You must log in or register to reply here.

R
Is it possible to promote vine growth on a nepenthes alata?

Plant of the Month January 2023