My Brocchinia reducta is growing again!

After a long period of non-growth due to shock, my Brocchinia reducta is starting to grow again, my lovely plant loves the sun so I had it in my mother's bedroom in a west facing window and watered the urn, fed it a couple of bugs a month, the plant was growing beautifully, vigorous and quite fast, it even needed repotting because it looked so crowded.... until my younger brother and sister were horsing around and they knocked out my plant (you bet I was mad but afterall theyre still siblings

), since the leaves were stiff and brittle they broke and the plant looked plain ugly with sand and dirt all around it, so I took off the severely broken leaves which constituted all but the bottom growth near the apical meristem; unfortunately I had to remove my brocchinia from my mom's window and moved it to my balcony. Since I was also awaiting to repot it prior to the accident, I decided to take advantage of the situation and just repot it so the plant could start new growth again in a larger pot. I felt bad for what had happened because once I repotted it, I noticed a baby pup was on its way but it had been smashed too. It wasn't even one week after placing my brocchinia in the balcony when my younger sister again threw her heavy backpack on her way home from school and it landed no where else but exactly on the spot I had my brocchinia and again even the smaller leaves were broken. Now I just had nothing left just a tiny trunk and roots, I felt really hopeless and didn't see any growth on the plant. I literally thought It was going to die from shock because I saw no growth after 3 months!! I moved it to another smaller pot and nothing happened, growth was so slow almost unnoticeable. Then what happened next was after a period not watering the urn, I finally remembered that the plant loved to have the urn filled with water, since then I began to see GROWTH AGAIN!!! I think the shock and the dry urn must of made the plant go into some kind of dormancy. As I watered the urn more and more I noticed water didn't evaporate as fast as it used to and now a small tank was beginning to form again and I also noticed that the apical meristem for some strange reason sunk deeper into the urn. Being excited to see new growth I googled information about bromeliads and remember reading that bromeliads with little fertilizer grow very slowly! that's it!! I fed it a grub I found and an earwig and almost immediately I've noticed the leaves are growing up fast again!!!!

this first picture is to scale of the actual life size plant and pot, it faces an east window for now (in my room)
you can see in the bottom of the trunk the remnants of what was once all leaves now its just a boring trunk 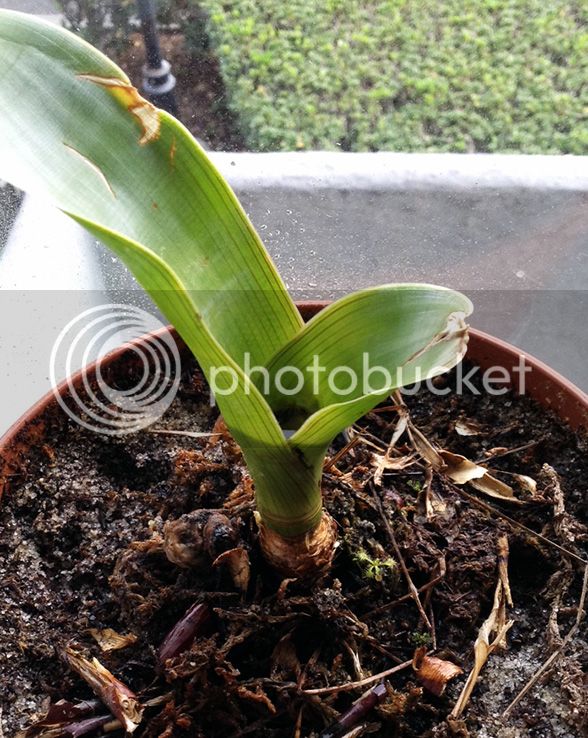 the dry parts on the leaves were areas that broke from the shock of the accident, now the plant is resuming growth 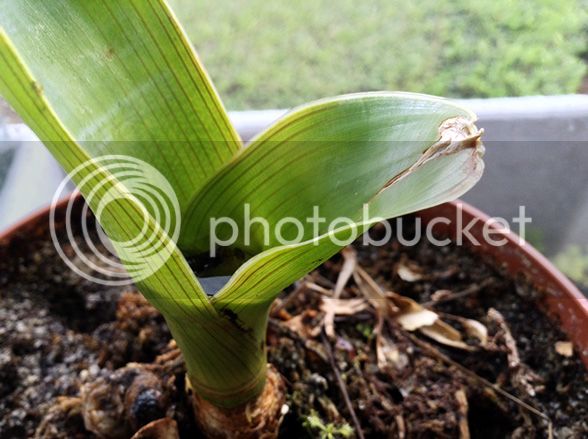 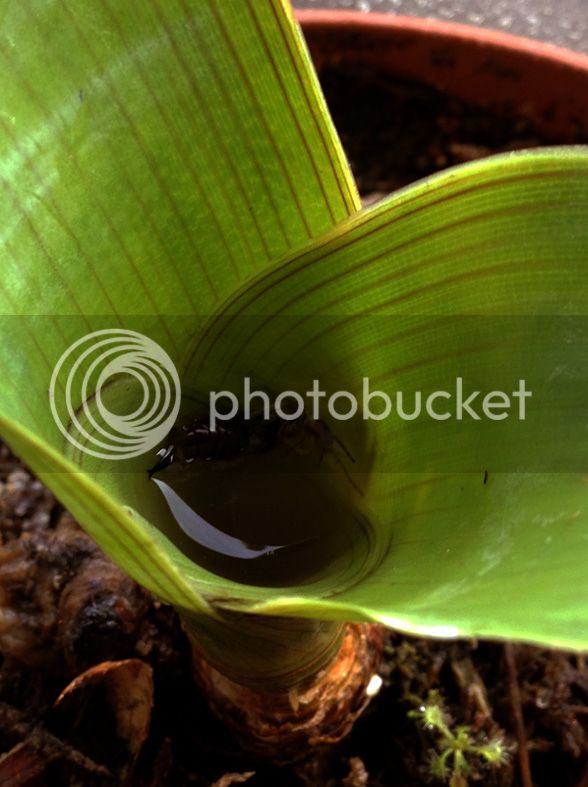 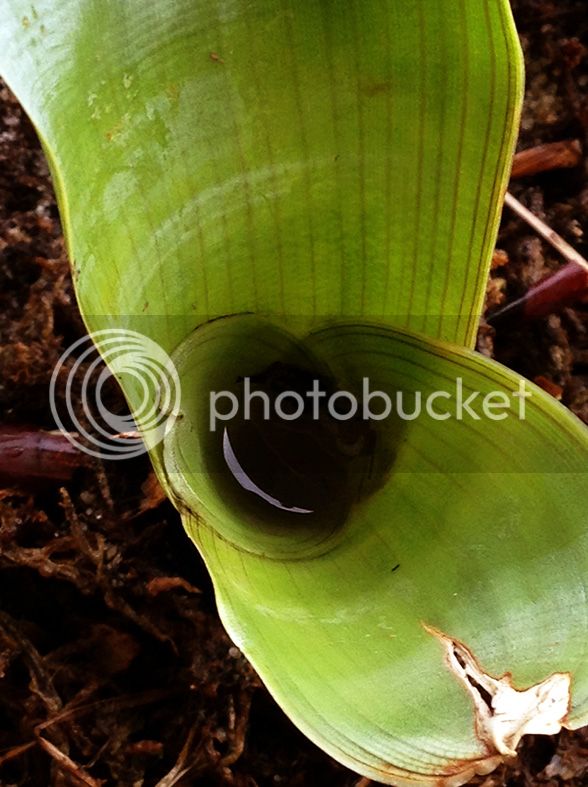 Wow this is the first time I've seen pictures of this plant in cultivation. Thanks for sharing! I totally understand how frustrating it can be when your plants are hurt by someone else. When I was in middle school I had a Darlingtonia growing on the windowsill and it was doing alright but when I wouldn't listen to my mother she would pinch the plant on the growing point. She killed both the main plant and a baby plant on a runner and I was really sad. I haven't had a chance to grow Darlingtonia since that time. I'm glad your Brocchinia reducta was able to survive.
It's interesting how your plant perked up due to feeding, with it being "protocarnivorous" and all. It must be pretty cool seeing the digestion take place like in a pitcher plant, except much easier to see.

@Tanukimo I'm really sorry to hear about your Darlingtonia, why haven't you given it a second try? I've stopped giving VFTs a chance, I always end up killing them on top of that being temperate really bothers me, I enjoy year long plants more so i've moved away from temperate CPs in general. I noticed you avatar location says you are from Hacienda Heights, its good to know someone local!

I'm from Hacienda Heights but I'm in Northern California for school right now. I'm going back home this weekend, though. Most of my plants are still in Hacienda Heights. I prefer growing tropical plants too. It's not that I've been avoiding Darlingtonia but I just haven't had a chance to try another one since the only one I got was from a nursery which has closed down already. Also, I'd rather not grow plants which require a lot of care while I'm away, since when I went away for college I lost almost all of my plants due to my family not really knowing how to take care of them.

Just wondering, what is the soil mix ?
S

Excellent question Maiden! Im growing it in a mixture of about 50% Moser lee dead LFS and 50 % silica sand, then I topped it with a very thin layer of peat (to prevent quick evaporation) and dead brocchinia leaves. I water the soil thoroughly but only after the surface completely dries to prevent rot. I like this mixture since its porous and slightly moist but not too moist and the roots really like it they go crazy.

After the winter i think i will buy a lil reducta from wistuba. Its a pretty cool bromeliad

I will try this soil mix, thanks a lot.

The only brom i have right now is tillandsia funkiana and ionantha.
S

that's awesome! yeah reducta is pretty cool, im more overprotective of this plant because its my second brocchinia reducta, i didnt mention it on here but i used to have another one, but since i was new to growing brocchinia it died from crown rot from over watering it ( soil and urn). The first one came potted in peat and perlite but this one was shipped bare rooted thats why i came up with this mix that I some how imagined would be in their natural habitat ( sandy and dead leaves). I also have a little airplant (tillandsia) but i lost the label and i don't remember its species anymore. I think bromeliads in general are relaxing to have,they dont ask for much care. I recently purchased another bromeliad species (Neoregelia kautskyi) that should be on its way. Although my dream bromeliad is brocchinia tatei but im no where willing to pay over 100 bucks to buy it overseas =P

for your tillds, post a picture here, maybe i know your specie.

I grow reducta in pure sphagnum moss at my apartment balcony. It has been with me for 3 years and one of the plants gave me an offshoot. The media is often barely moist since there is quite a bit of wind. Temperatures are 75 - 90F, Rh60-90% year round.

It's from France so it could be the reason why it's slow growing. Pretty healthy, though I think it prefers cooler weather.
S

@Maiden here's a pic of the tillandsia, it was purchased from a local hardware store since im not allowed to say names lol 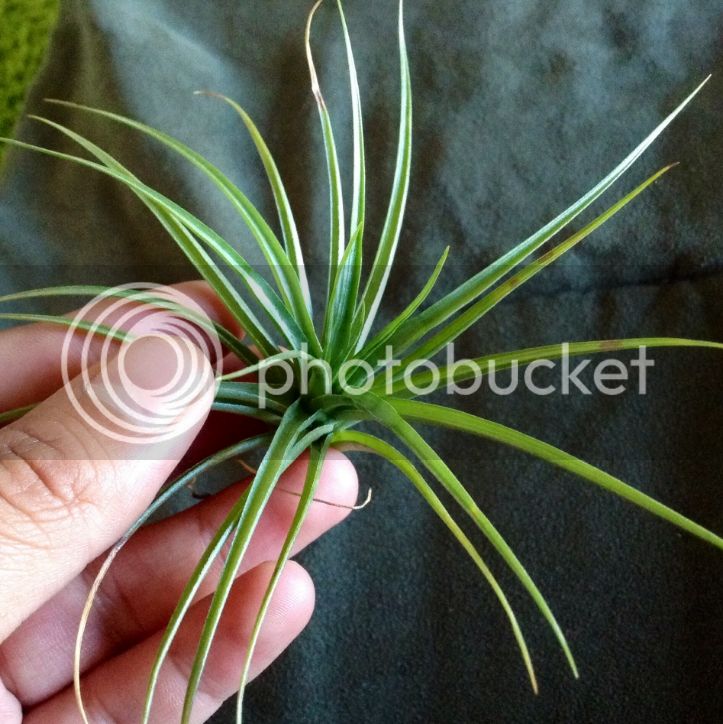 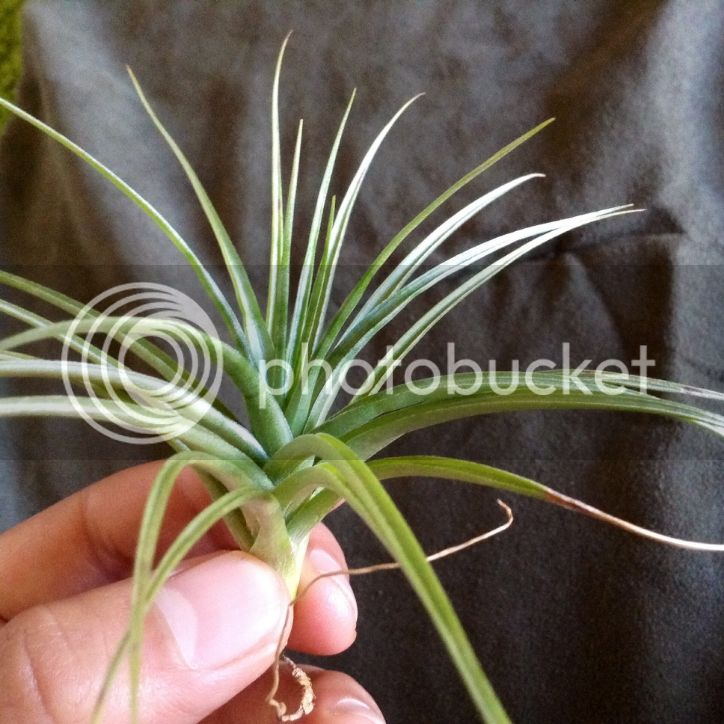 @Cindy amazing! 3 years is quite some time. Does yours catch insects on its own since its outside? I love how its exposed to wind. So the france strain is slow growing? interesting, i wonder what strain mine is, all I know is that its a vigorous strain based on the time I've had it I bought it from a purveyor here in the US although i dont think he sells them anymore

It looks like Tillandsia stricta, a common one in cultivation. Well this and your reducta have a nice home. Keep us updated!

nice tilds ! I dont own that specie
S

here's an updated pic of it!
it's definitely developed more leaves since. Nice! It's definitely starting to look more like a bromeliad now. Just wondering, are the leaves slippery due to the wax?
S

Hey Tanukimo! Yes, they become slipery due to a wax coating that protects the leaves from water damage also leaves of b.reducta are brittle, so theyre very stiff and break easily if bent! just like heliamphora, i want to get a hold of a humboldtii plug soon so i can try growing it on here hopefully i win it in the nasc auction.
T

Salgadoxx8 said:
Hey Tanukimo! Yes, they become slipery due to a wax coating that protects the leaves from water damage also leaves of b.reducta are brittle, so theyre very stiff and break easily if bent! just like heliamphora, i want to get a hold of a humboldtii plug soon so i can try growing it on here hopefully i win it in the nasc auction.
Click to expand...

Don't you already have humboldtii? Or at least, it is on your grow list.
S

@Tanukimo yea, i used to have it, i havent update my growlist
S

heres an update! its been what...2 months? its definitely reaching its original size, especially with this hot California-soon to be summer sun. Check out the last pic, it catches bugs on its own. 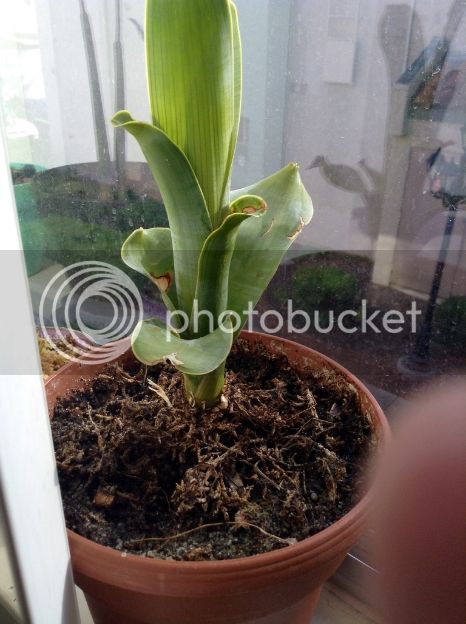 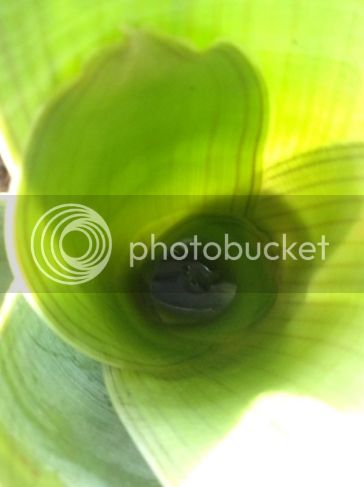