My N. Attenboroughii and it's penny pincher habitat.

When I say low budget, I mean High school student budget. This post is also asking about care suggestions for my new N. Attenboroughii.
My Attenboroughii has been in my care for approximately 3 weeks now. It's lived in this makeshift habitat I've constructed for it, and seems to be doing pretty well. I could find hardly any info about that specific species, but I've been going off of highland conditions. Here are some specifications about the 'greenhouse.'

What is it: Well it's a clear glass vase about 9-10 inches wide with some barely opaque streaks on it. Sunlight reaches the plant through it well. I cover the top with plastic wrap to trap in the humidity. The plant itself is suspended over about 3 inches of water at the bottom with comfortable room. When heated, the reverse-osmosis water raises humidity and condensates on the wrap. I check on it often at night to keep it more stable.

Light: The Window it is next to faces Northwest. I can't affirmatively say how many hours of sun it gets since I'm away from home until 3, but I've observed that it gets directly hit by at least 3 hours with a fairly strong beam. Due to how much condensation I see before I get home, I assume it gets more sun for longer.

Pot: The pot is pictured below. I actually have no idea what potting mix it is in. I was told it would be shipped bare-root so I bought Pearlite and Moss, but I ended up not needing it.

Watering: The falling condensation from the top of the plastic wrap keeps the soil constantly moist, but not soaked. It seems to have worked well so far.

Temperature: I live in perfect-climate Santa Barbara with AC systems. The temp is always perfectly stable. It probably would do just fine outside.

Humidity: This is my main worry. It's clearly humid in the vase, but I can't tell how much since I have no form of measurement device. It forms drops on the side of the vase, but does not look like it is too high.

Other notes: I have one functional pitcher. In the time I've had the plant, it's gone from a closed pitcher due to a leaf tightly sealing it to mostly open. I hope this indicates good health. Since the one main pitcher was secreting only a small pool of digestive acid too small to eat anything and the lid was preventing drops from falling in, I decided to add water for it. I filled it up with reverse-osmosis water up to half way and gave it half of a fly to eat. A week later, the water had almost completely dried up, so I added a little bit more. This time it seemed to stay put and checking the fly, the body had become a bunch of white strands, indicating digestion. Concerning that pitcher, the connecter between the leaf and the peristome is slight brown in color. Should I be worried? The other big pitcher is dead, however it was half dead when it arrived and finished while I had it. Now that the pitcher is completely dead I am ready to snip it off, but I wanted to double check first. There's little green moss growing up the small stem of the plant, though it hasn't reached the leaves. It's not any type of mold, but I'm worried that it might attempt to take over. Is this normal? Lastly there are a bunch of brown spots on one of the leaves. There were quite a few when it arrived, but I'm fairly sure they've increased. Does this indicate dying? Here are some pictures below for reference. 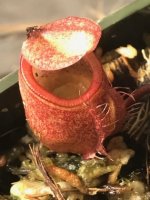 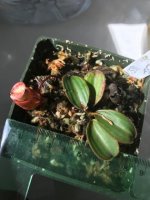 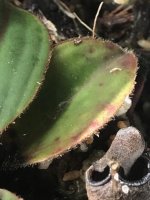 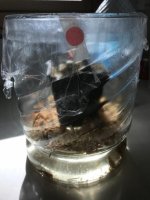 You're going to want to be careful. A sealed container like that can easily get too hot after sitting in direct sun. During a strong day you might see temperature peaks that are unsafe. Another issue is that the lack of air circulation opens your plant up to fungal attacks. For plants these slow, 3 weeks isn't much time to go off of. You'll need a few months to see if the plant is truly happy and will pitcher consistently in your conditions.
You must log in or register to reply here.