I "rescued" a crowntail betta yesterday, and put him into a temporary tupperware home...where for all intents and purposes, he'd probably be fine. 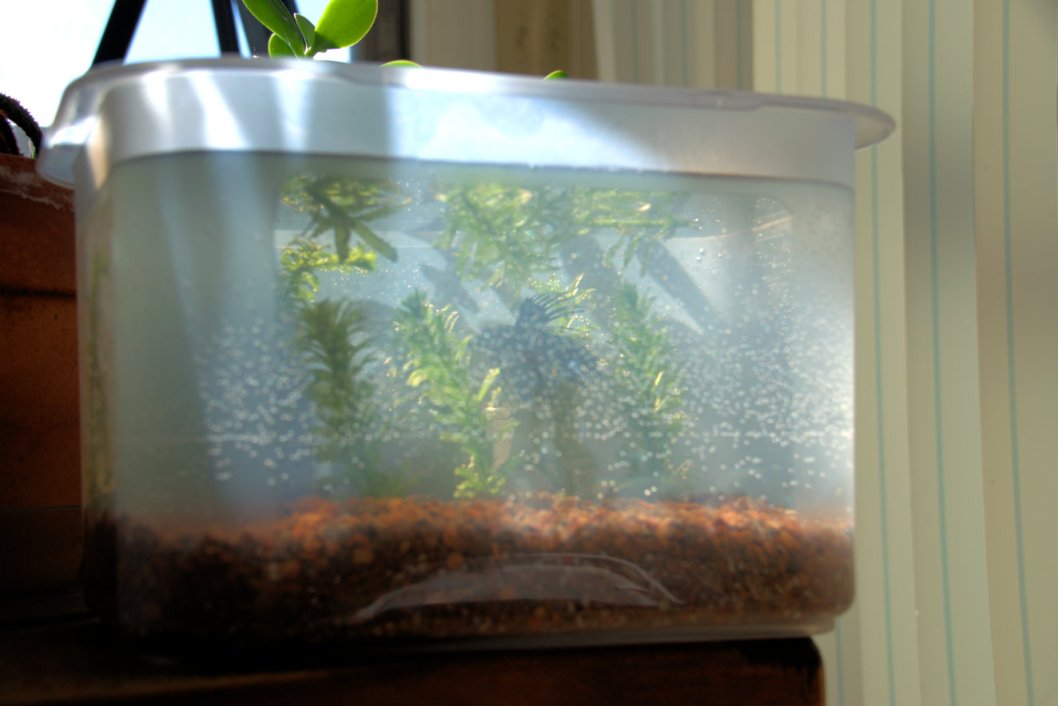 But I don't like having bettas in anything less than 2 gallons...my conscience nags at me. So today I set out on a DIY adventure, not only for the fish, but for myself, because I'm thinking of maybe starting up a proper freshwater tank soon.

Two things I really wanted was filtration and heat. Heat wasn't an issue since tiny heaters are commonplace nowadays. Filtration was another matter, though...especially since I wasn't going to use a square tank, and didn't want an overflow filter anyway.

Looked up some DIY designs online and found one to my liking, and modified it a bit to turn it into an undergravel filter. 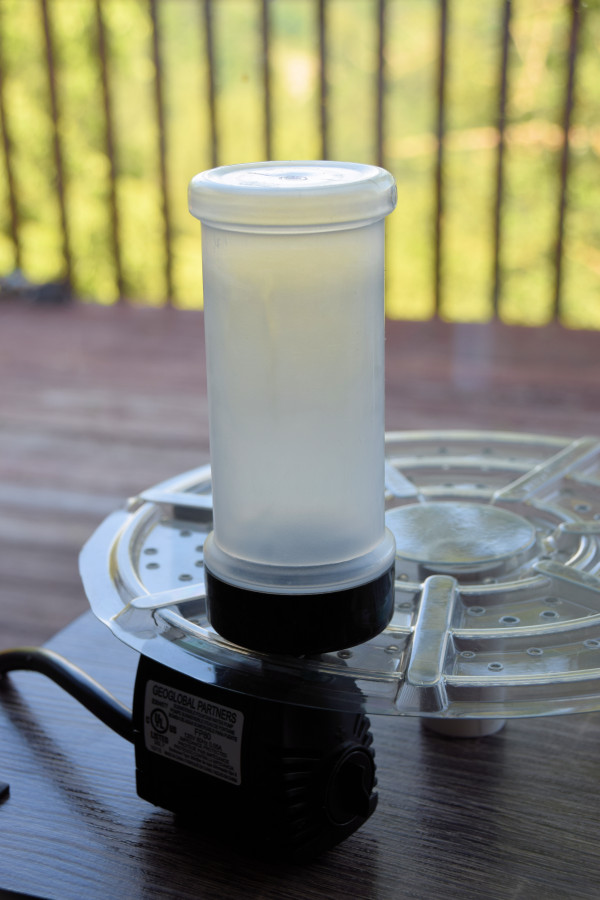 Basically...that's a fountain-pump with a plastic parsley bottle shoved on top of it. Stuff a little poly-fil in the bottle, and viola, you have a power-filter.

That's all fine and good...but how to stop the pump from sucking up bits of gravel? I wracked my brain for awhile before deciding that one of my extra water-trays looked about the right size, so I cut off the edges with scissors, and poked a bunch of holes in it with the soldering iron. I'll also probably cover it with a layer of rubberized screen mesh to stop any small particles of grit from getting to the impeller. 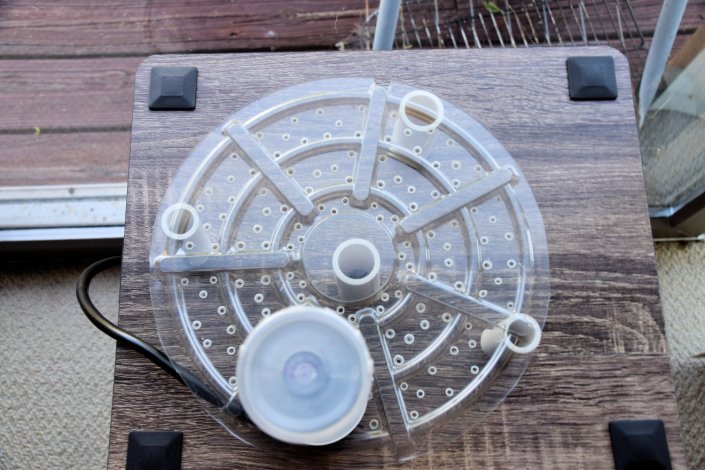 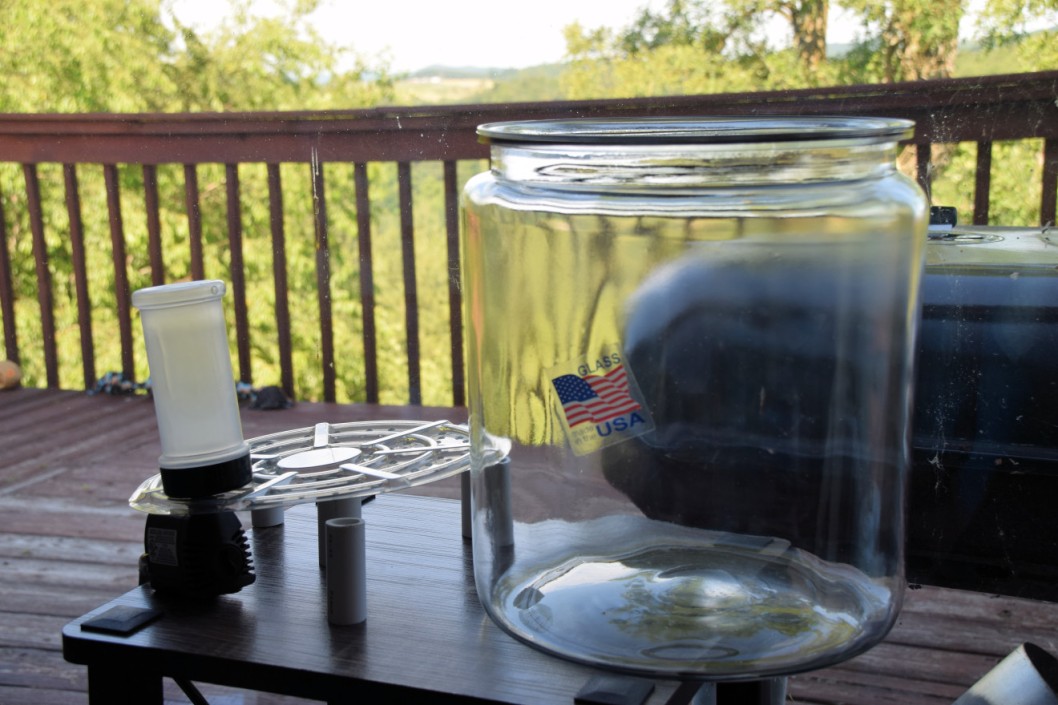 I'll probably put the heater underneath the tray as well, since there's plenty of room, and the water will be recirculating, in order to keep it out of sight and recover a little bit of space for the fish.

I'll also probably put a circular airstone in the center for aesthetics. Not sure that it's really needed, and I may change my mind. Other than that, the decorations will mostly be plastic, except for some sprigs of Anacharis. The tank will be sitting in an East-facing window, so I'm hoping that's enough light for the plants and fish both. I don't intend on supplementing with artificial light at the moment.
Last edited: Jun 14, 2016

An air stone is not needed at all. Betas naturally water ways with low oxygen content. They have evolved a simple lung from their swim bladder witch allows them to breath air. He might actually do better without the air stone, but I'm not sure about that. Congratulations on your new fish friend.

The air-stone, as I said before, was going to be just for aesthetics, but I still haven't decided. It just depends on how much space I actually have once everything is in place.

As for the plants, I appreciate the recommendations, but I think I'm going to go with Anubias. Two forms; Anubias barteri var. nana, and Anubias minima. Both of these can be mounted to rocks / decoration so that the gravel can still be siphoned without disturbing the plants, or leaving pockets that might turn anaerobic.

I see. Your betta would probably enjoy a marimo too. They've been known to lounge on them like bean bag chairs.

I wanted something to cover up the plastic bottle of the filter that was sticking up above the gravel, so I carved this out of foam earlier: 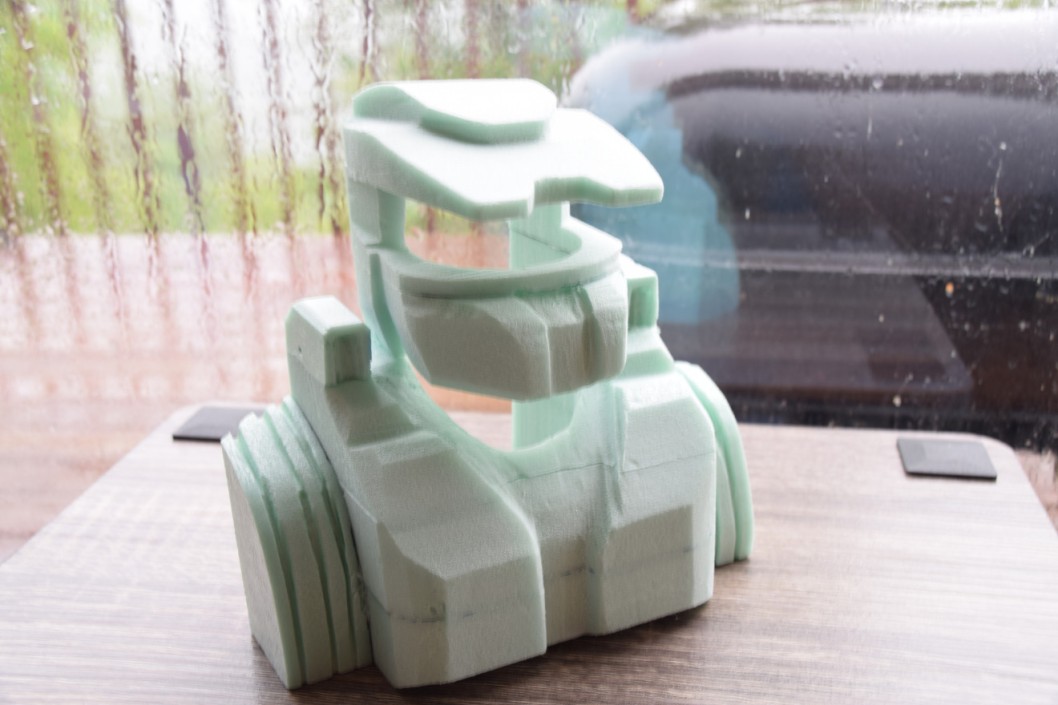 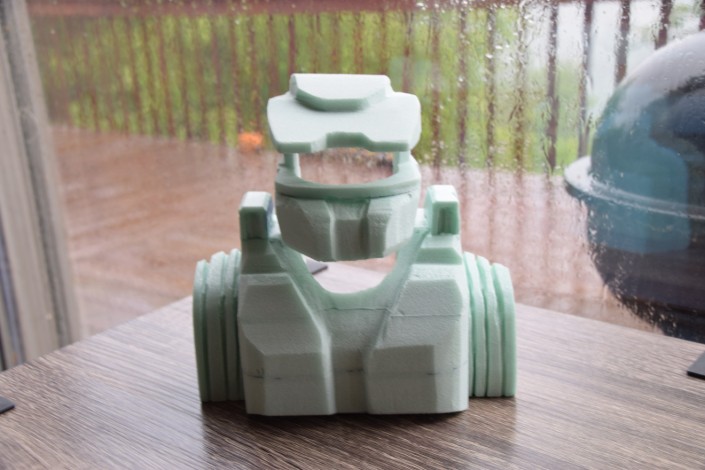 I've heard that enamel paints are okay for DIY aquarium use, so that's probably what I'll use to paint it. I'll also likely need to drill some holes in the bottom and glue in some largish fishing weights to keep the thing from floating.

(Extra points if you recognize it)

It's a robot, maybe a transformer, but that's all I got.

I've known a few beta enthusiasts who are strong proponents of giving a beta a tank no smaller than 5gals. With they can survive in smaller, it is not necessarily mean they should be kept in smaller containers. So the fact you went with something bigger than the Tupperware container is a good thing.

Might be the last post until the plants come in (and then I'll just get pics probably). I've been diligently researching (something I never did with my previous freshwater setups), and realized the betta is probably going to stay in his tupperware for another 3-4 weeks, as I'm going to do a complete fishless cycle on the new tank. To my chagrin, I've also decided not to use my nifty little filter cover for practicality's sake. The footprint was going to cause a major difference in the thickness of the gravel around it, especially the edge between the filter and the wall. In order for the UG filter to work effectively, it needs uniform suction throughout the gravel. So...I'll gladly sacrifice aesthetics for a properly functioning filter.

Tomorrow I'm heading out to replace my 5-year-old API freshwater master test kit, and grab a couple other essentials. I need to wrap my head around KH and GH and the roles they play in water hardness and PH. I'm planning on including 2-3 ghost or amano shrimp with the betta once the new tank is ready, and I want the water quality to be such that they have no problems molting / breeding. If the store has it, I might also grab a bottle of Tetra Safe Start to see if I can't reduce the cycle time to two weeks instead of a month, but regardless, I'll be testing ammonia levels daily and using pure ammonia to feed the bacteria.

Can't think of much else to say atm...other than; wish I'd actually PLANNED on buying a fish so I could've done all this ahead of time. Some things you can get away with buying on impulse, but fish ain't one, lol.

I must warn you, if you're going to put small shrimp in your betta tank, EXPECT THEM TO BE EATEN BY YOUR BETTA. They're carnivorous fish and have been known to attack African dwarf frogs that people put in their tank with them.

curtisconners said:
I must warn you, if you're going to put small shrimp in your betta tank, EXPECT THEM TO BE EATEN BY YOUR BETTA. They're carnivorous fish and have been known to attack African dwarf frogs that people put in their tank with them.
Click to expand...

I'm expecting it, but hoping it doesn't happen. My betta seems pretty shy so far, while I've heard of others that will nip at your fingers, etc.

We'll see what happens. I DO want the shrimp to breed so the betta can feed on the eggs / fry....just so long as he leaves the adults alone.
F

Nice setup! I'm sure he will enjoy the room. I used to have a beta in a five gallon setup, with several live plants and a bunch of other, very non-aggressive fish. He usually showed little interest in the other fish, but I did think he enjoyed the stimulation.

They say betas can learn to recognize their people. After a few months I did notice he would always come to the front to sort of check me out whenever I walked by. I do miss that fish....

That's true, many fish can recognize their owners and bettas are particularly good at it.

Zath said:
I DO want the shrimp to breed so the betta can feed on the eggs / fry....just so long as he leaves the adults alone.
Click to expand...

Ghost shrimp keep the eggs in their abdomen until they hatch, so if they end up eating the eggs your female shrimp is probably getting eaten too

I used to use corner biological filters in my Betta tanks. As you're using a round tank it should keep you occupied for a while trying to find a corner to put it in. Any of those simple air stone driven internal filters will do the job, just fill them with appropriate sized gravel. There's only one fish in the tank, it's unnecessary to use undergravel filtration.

This is why I bought a second, identical jar. In case other people gave me better ideas and I didn't feel like tearing this one apart. XD

You never told us, what and or who is your foam sculpture modeled after?

curtisconners said:
You never told us, what and or who is your foam sculpture modeled after?
Click to expand...

Lol, it's Master Chief from the Halo video games.

Again though...can't use it with the UG filter, and even if I go a different filtration route...it's awfully floaty. Would almost have to glue / silicone it in place.

In a well planted tank, I would expect the shrimp would be able to avoid such tragedy. (Perhaps if there were also places they could go to hide from the fish?) Would also help the beta feel more secure.
Last edited: Jun 17, 2016

Haha, my betta loves me now. I fed him a few mosquito larvae (collected in a net and "rinsed" in a container of fresh tap water). Afterwards, he's no long hiding from me when I move around, and actually came right up to the wall of the tupperware to stare at me. Probably wondering when I was going to give him the rest.

He's had a very healthy appetite the last couple days, and while I'm trying not to overfeed him (once a day, except for today, with the larvae as a "snack"), he's been eating everything I've given him, whether it be pellets or bloodworms.

Unfortunately the anacharis isn't doing so hot in the new location, so I'll probably have to remove it tonight when I do his first water change. Luckily I bought a number of small plastic plants so he'll still have places to dive for cover if he feels the need.
Last edited: Jun 18, 2016
You must log in or register to reply here.

I think I killed them...