flava Bronze originated from Meadowview, and is interesting in that not only is it a florida origin copper colored clone, but it also has an orange flower. WHAT? Yeah, there are a number of flava clones that have orange flowers, most of them originating near the Cooks Bayou area. But before you dismiss this plant as just a flava with very recent rosea introgression, i've seen a batch of flava Bronze selfed, and I can assure you, this plant is all flava all the time. The selfings segregated with about half bronze clones and half ornata, so it could be a good breeder for more coppery tones. Given that there are other orange flowered clones out there that are just as much flava, it seems like it's either a distant rosea regression (several generations back), or perhaps just a point mutation that happened to spread through the population. Either way, this isn't a very common clone, and if you don't have it, hop on it. This isn't a particularly fast growing clone, so divisions aren't as common.

Division was taken in Jan 2020, and has had a full growing season to get established for you. Bidding starts at $5, shipping is $8 (US only) that can be combined with my other auctions. The division photographed is the exact one you will be getting. 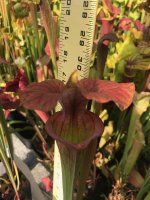 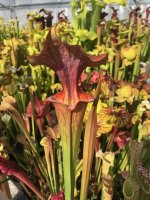 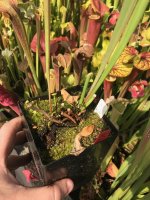