Ok, up for auction today is what could be a very rare color form of flava from the Carolinas. If you aren't completely obsessed with flava to the extent that I am, you might not know that generally, the rubricorpora color form (red tube with yellow lid) is localized around the counties of Liberty, Franklin, Bay, Gulf and southern Santa Rosa locations in Florida. That's it. The plants in Blackwater are more of an ornata than a rubricorpora, and the color form peters out well before you reach Georgia. Cuprea's pop up in the Carolinas, and the red tubes there are generally solid colored from lid to tube likely given the cuprea color genes influence. While there may have been some of this color form in the past within larger populations, I bet it wasn't common and isn't common today that I know of. Certainly not in cultivation.

That said, I fully believe this plant could be a real deal Carolina rubricorpora for a couple of reasons. 1) This was a seed grown clone from imported wild seed back in the 70s from a very reputable grower. I've confirmed with the original grower it's origins and it's backstory. It checks out. 2) I've selfed this plant a number of times and believe it shows very severe inbreeding depression unlike anything I've ever seen from Liberty County plants. 3) I have actually created Carolina genetics rubricorpora within my breeding efforts involving Waccamaw, so I know it's possible to get this color form with careful selection. 4) I have obtained a different, yet similarly colored Carolina rubricorpora from a very old grower who obtained their plant from the wild decades ago. If it could happen there, it could happen elsewhere. Everything is coming up Milhouse if you ask me!

I've been importing lots of this plant for a number of years from Mike King because I was obsessed with it maybe being real, and till now have been hesitant to divide my plants because of the breeding potential. I've given up selfing this plant based on my results, but have renewed interest in outcrossing with other Carolina plants, so I won't be letting any more go after this piece is gone. This division was taken in Jan of 2020, and is well established and ready to keep taking off for you.

Bidding starts at $5, shipping will be $8 (US only) and can be combined with my other auctions. While it's easy enough to import plants, they take a very long time to establish, so don't sleep on this chance to get a well established division of this plant. And yeah, it really does have a crazy, forward leaning hood. 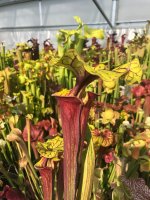 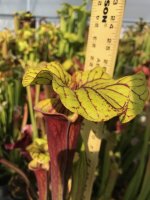 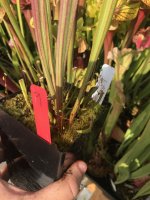 An orchid fancier with a CP problem