Pilularia globulifera, or pillwort,[1] is an unusual species of fern native to western Europe,[2]where it grows at edges of lakes, ponds, ditches and marshes, on wet clay or clay-sand soil, sometimes in water up to 30 cm (12 in) deep. It has a pea-shaped 4-chambered sporocarp, each chamber with sorus bearing both macrosporangia and microsporangia.
Some of the plants growing in association with this species in the UK include water celery (Apium inundatum), marsh pennywort (Hydrocotyle vulgaris) and lesser spearwort (Ranunculus flammula).

This is an internationally threatened species included in the European Red Data Book. It is listed on Schedule 8 of the Wildlife (Northern Ireland) Order 1985, but it has not been seen since 1970 and may now be extinct in the province. It is protected under the Wildlife and Countryside Act 1981 in the rest of the UK, where it is now classified as Vulnerable.

Pillwort can be grown in a "bog garden" or as a marginal aquatic in a garden pond.
Click to expand...

OK here's Fred with another wort. I have a couple of quarter trays with this fern in and can see immediately that it is super easy to identify in the wild. That's once you've knelt down on mud and decided that the mass of green growth isn't grass or reed and your high power loupe hasn't steamed up. So, this very grass like fern grows on the muddy bits on the sides of lakes and ponds and sometimes in them. And by reputation dislikes competition or shading from other plants. There's nothing better for it than cattle trampled mud at the water's edge.
About a month ago I noticed that one of my little trays of Pilularia was starting to glisten in parts. Closer investigation revealed the presence of Drosera binata seedlings which was greeted with a sharp release of breath which may or may not have contained a slight expletive as it took me 27 years to get the last one to pop its clogs and that was the winter of 2009/10 with a temperature of -18C (0F). Those seedlings are now in their own little pot and I suppose have a pretty good chance of seeing me out. Anyway, back to the point. While weeding out the seedlings I broke off a leaf and a half ( probably more accurately described as two fronds) and thought I'd try it in the Sphagnum moss of one of the Darlingtonia trays.which of course is not what the plant likes at all according to conventional wisdom. I now can report that that tray now contains a whole five fronds and the plant looks to be quite pleased with its surroundings.
As the little chap is red listed ( At least it is here) why not give it a little boost and try some in your collection.

Here is the plant in Sphagnum and it's not five fronds any longer. Good growth in the last 15 days. 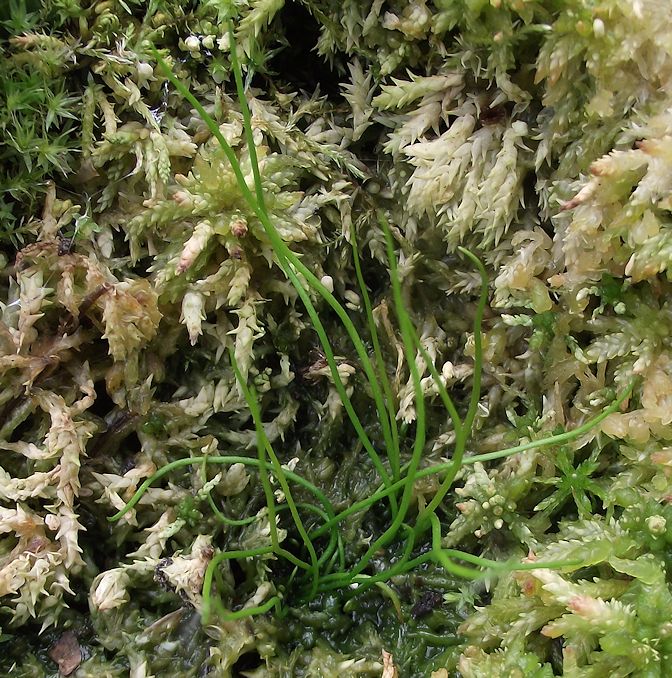 I understand that there's also Pilularia americana which looks exactly the same.

Very interesting. This plant is not only something I would overlook but would probably rip from my pots had it been in there.

Yet I had to rip out some Drosera weeds from the fern tray. It's much the same as when I have to take out the weeds from my Liverworts.
You must log in or register to reply here.