I love tis game and now they have it for Iphone.

'Plants vs. Zombies' arrives on iPhone/QUOTE] 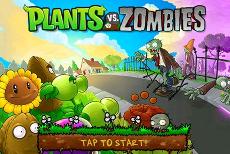 One of the highest-rated computer games of 2009 is now available on the iPhone and iPod touch. PopCap Games' Plants vs. Zombies can be downloaded from Apple's App Store for $2.99.

The tower defense-style game, which pits garden vegetation against hordes of the undead, retains much of the same look and game-play as the acclaimed Windows and Mac game, but players can now use their fingertip to select which plants to use against the zombies and where to place it on your home's front lawn (and later in the game, on the roof). Tap to collect balls of sunshine (your resource) and buy goodies from your neighbor Crazy Dave's trunk.

Game Hunters received an early copy of the game and after a few days of play, we can confirm it delivers virtually the same experience as the computer versions -- including all the plant and zombie types, all 50 levels and upgrades -- and most of the modes and mini-games. Even the graphics, 11-song soundtrack, sound effects and music video at the end of the game is here.

In fact, this portable version has some features not found in the computer versions, including more than a dozen achievements (Xbox 360-style rewards for completing in-game challenges) and a Quick Play Arena that allows you to replay of any level after completing the Adventure mode.

The game also works well on a 3.5-inch screen as the developers cleverly moved a few of the interface elements around to best suit the smaller display, such as your weapon loadout along the left-hand side instead of the top.

For the uninitiated, players must prevent zombies from making their way into your house and eat your brains. In order for you to stop them, you must plant a number of flowers, mushrooms, bushes and other foliage that can take down these zombies in a number of humorous ways, such as eating them with a Venus Flytrap, stomping on them with mean squash, firing a row of zombies with a hot pepper or blowing them up with exploding fruit.

Gamers face new challenges such as creeping fog that obscures your view, a swimming pool, zombies who use floating balloons to evade your attacks and Michael Jackson-esque Thriller fighters who crawl out of the ground to dance their way onto your property.

Missing in this pocket version is Survival (endless) mode and a few of the fun mini-games, but it doesn't detract from the experience much at all. Also, the action could slow down a bit when you've got a lot going on the screen at the same time, but overall, PopCap Games has done an amazing job porting this instant PC/Mac classic to the iPhone/iPod. To say this game is worth the $2.99 price tag would be a grave understatement.

Readers, what do you think of Plants vs. Zombies for iPhone?

I just used my 1 hour demo with my kids 2 nights ago, think i'm gonna have to pay the $10 and get it, they loved it

I loved it too. It's really fun.

Yeah, one of the funnest games I've played in a long time.
You must log in or register to reply here.

Plant of the Month January 2022

Plant of the Month December 2021

Plant of the Month October 2021