I have a 4-tiered plant rack and it came with Gro-Lite fluorescent bulbs. As time went on the bulbs needing replacements and I have done so with the cheap bulbs from Lowes. They are 24
bulbs. Is there anything better than Gro-Lite bulbs?

T5 or T8? The Philips tubes with the green ends are ok. Try Home Depot if they don't have them at Lowes.

This might seem like a strange idea, but what about an aquarium store? They should have grow lights normally used for aquatic plants or corals. I've never done this myself though.

I'm guessing he has T8

I've been switching out my T5's for Current LED's fixtures.

Or these bulbs would work in those fixtures. I still use a few of these.
Zoo Med Laboratories, Inc.
Last edited: Apr 28, 2016

I stuck T-8 6500k Daylight tubes in my fluorescent fixtures. I used older T-12 fixtures but replaced the ballasts with T-8 electronic ballasts. More light and they run cooler. The plants like them and I like the look of Daylight tubes.

I just use daylight or cool white tubes. They seem to do an adequate job. My plants go through their typical cycles of dormancy and flowering where they should.

Personally I think grow lights are a waste of money. I've read various papers (mostly marketing hype). There is no doubt some valid science behind this but I don't have the time, money and space to conduct trials of my own. Until then I'll continue in happy ignorance.

I went to Home Depot to look at the lights being offered. It was close by. They don't have an extensive selection. Neither did Lowes. I asked about the 6500 lumens concept. The highest rated lumens they had for 24" bulbs was 2350. They did have 6500 Kelvin on one of them and that was explained to be as being part of the color spectrum, from white to blue, with 6500 being the highest end, with the blue. I'm not not sure if the 6500 lumens I was asking about was the same thing as 6500 K, or coincidental, or whether it would be adequate indoor lighting for the sundews. Also, isn't there a difference between what we perceive as brightness and what is most beneficial for the plants?

And yes, I have considered going to a tropical fish store, for that purpose. I want to replace 10 bulbs. I'm thinking that a pet shop might be more expensive.
Last edited: May 2, 2016

The theory is that plant (chlorophyll) use the spectra absorbed. Since plants are green, chlorophyll absorbs mainly the red-magenta-blue spectra - reflecting the cyan-green-yellow spectra. By using "grow" lights that emit red-magenta-blue spectra the energy isn't wasted on the spectra plants don't really use. That's why plant lights have a magenta/purplish/pinkish look to the human eye. With fluorescent tubes the either use phosphors that emit more of the magenta range or add filters to filter out the green range or both. In which case the energy emitted by the green ranges is wasted anyway. Which is why I think "grow" lights are a waste of time since daylight or full spectrum tubes emit the red-magenta-blue spectra as well as being more natural and pleasing to the eye.

As I recall Av8tor1 was using daylight tubes that the phosphors emitted more of the plant friendly spectra.

T5 tubes have the smallest diameter, followed by T8. T12 has the largest diameter. While the sockets for T12 and T8 are usually interchangeable the ballast circuitry is not unless specifically made to power either type.

I grow the majority of my sundews under regular tubes as does Ivan Snyder. I get the Philips daylight ALTO T8 tubes with the green caps from Home Depot. They don't always have the 2ft tubes but they usually have a bigger selection than Lowes. A pet/aquarium store will be more expensive as they don't have the volume sales as the big warehouse stores.

I thought T12s were being phased out. You may have to change the ballasts on your fixtures and use T8s. 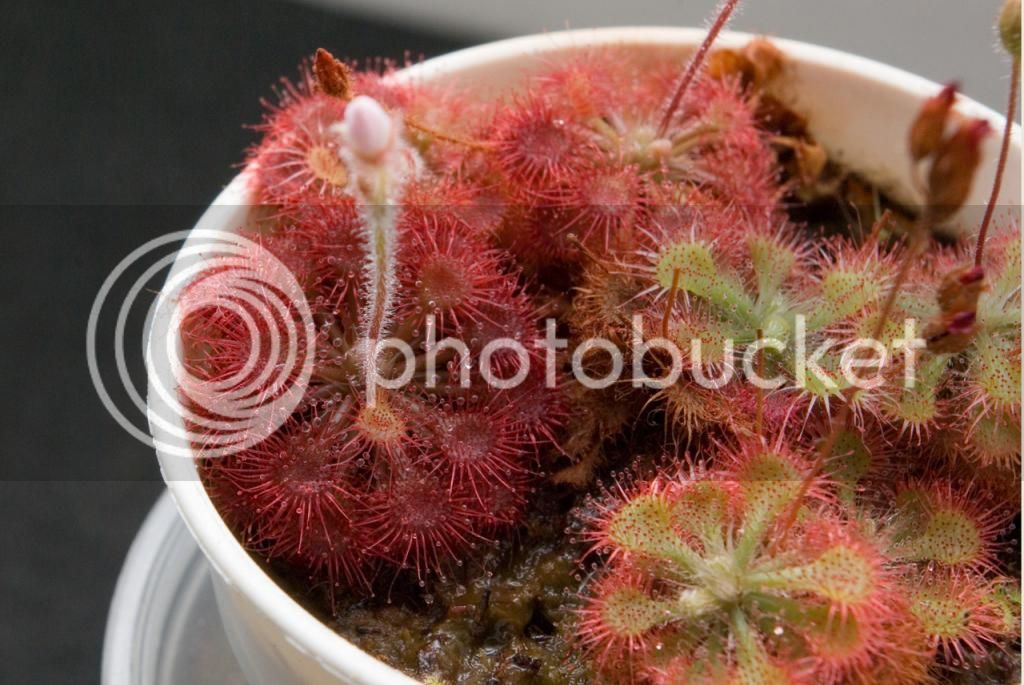