You may not know his name but you probably know of him. S.Readii was named for him. He did a lot of work for cp's. It's a great loss but all of us that loves cps are better off for the life long work he did. I talked to his daughter a few weeks ago, he'll be missed. 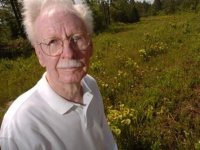 Well into his 80s, Stanley Rehder cruised around Wilmington in a Jeep with the personalized license plate "FLYTRAP." For many in the Cape Fear area, Rehder was "The Flytrap Man," a jovial spokesman and advocate for the region's carnivorous plants.

Rehder died Monday morning at Davis Health Care Center at the age of 90. He had been in failing health for some time and had lived at Champions Assisted Living since February.


Over the years, Rehder lectured widely on carnivorous plants, especially his true love, the venus' flytrap. He described the flytrap to Barbara Walters on NBC's "Today Show" and spoke about the plants on ABC's "Good Morning America," "That's Incredible!" and on UNC-TV's "North Carolina People" with Bill Friday.


Flowers were in the family's blood. Rehder's grandmother, Johanna, founded the Rehder florist business in 1872 – initially, by selling flowers from her Red Cross Street garden to visitors on their way to nearby Oakdale Cemetery.


Rehder's father reorganized the business as Will Rehder Florist, a wholesale and retail operation which flourished for decades. Years later, Stanley Rehder recalled following his father into the woods as a boy to help harvest thorny smilax from native trees to ship North as decorations for upscale hotels, including New York's Waldorf Astoria.


An Eagle Scout, Rehder graduated from New Hanover High School in 1939 and headed to N.C. State College (now N.C. State University in Raleigh) to pursue a horticulture degree. His studies were interrupted in 1942, however, when his ROTC class was called up for active duty in World War II.

Trained as an artilleryman, Lt. Rehder took charge of a mortar crew attached to the 66th Infantry Division.
On Christmas Eve, 1944, he was aboard the SS Leopoldville, a former Belgian liner converted to a troop ship en route from Southampton, England to Cherbourg, France.
Before it could reach port, the Leopoldville was torpedoed by a German U-boat. Rehder and another lieutenant took charge of lowering a lifeboat and managed to bring eight GIs to safety. They were extremely lucky; more than 500 Americans, and an unknown number of Britons, apparently went down when the Leopoldville sank, and another 248 later died of injuries, drowned or died from the effects of hypothermia in the cold water.
In 1988, Rehder would publish a pamphlet, "The Night Before Christmas," with his personal account of the sinking.
Rehder survived to march into Germany with the 66th and earned a Bronze Star.
After discharge, he returned to N.C. State to complete his horticulture studies, graduating in 1947.
He then headed home to join his older brother Henry in the family business. "Every week, I planted about 1,000 pots of chrysanthemums," he later recalled for Our State magazine.
Rehder took over Rehder's Greenhouses on North 11th Street, the family's wholesale business, and operated it for more than 25 years.
In 1948, however, Rehder took time out to work with the brand-new Azalea Festival. Among other duties, he headed to Whiteville to rendezvous by train with the first Azalea queen, Hollywood actress Jacqueline White, serving as her escort throughout the festivities.

Rehder went on to volunteer with the Azalea Festival for more than 45 years, usually handling transportation but serving as festival president in 1965.


In the 1970s, Rehder launched Stanley Rehder Realty, but he never lost his affection for flytraps. He lobbied legislators and other state officials for greater protection for carnivorous plants and pushed for years for tougher penalties against poachers who picked flytraps in the wild.


In particular, Rehder focused on a boggy depression behind what is now Alderman Elementary School, an ideal habitat for carnivorous plants. With permission of the property owner, Hugh MacRae II and The Oleander Co., Rehder spent 20 years transplanting and cultivating flytraps, pitcher plants, sundews and other insectivorous species (including a few not native to this area) onto the site.


Eventually, the site was put under conservation easement with the N.C. Coastal Land Trust to guarantee that it would remain a plant habitat forever. Earlier this year, the Wilmington City Council voted to rename the tract "The Stanley Rehder Carnivorous Plant Garden."


Rehder was at the garden in April when the Land Trust staged its "Flytrap Frolic," talking with young people about the plants and their life cycles.

A great loss indeed. Thanks for sharing.
R.i.p
M

Glad he lived a long life, never long enough though. Thanks for bringing his life to my attention for now I can thank him in my own way for the work he has done.

I wish I had a chance to meet him. It sounds like he lived a full life.

He sounded like a great guy. may he rest in peace. my condolences to his family as well.

wow. What a story..
At least he lived a full and happy life.

Condolences to his family.

Though I didn't know of him while he was alive he sounds like one of the best of us. Working to conserve carnivorous plants in North Carolina, and with such dedication, looks to me to be an act of great service to us all.

Thank you, Stanley Rehder.
You must log in or register to reply here.

Z
Been a while, but I’m back! (Michigan)