There are a couple reasonably local botanical gardens that have carnivorous plants in their collections...

The closest one (Matthaei) has a couple Sarrs, in with some VFT's and Drosera. And a hybrid unidentified Nep or two.

The farther, but nicer one (Frederik Meijer) has a much broader overall variety. They only have a handfull of Sarrs (mostly purpurea hybrids), sharing a room with all of the other carnivores, which includes a collection of Nepenthes, pings, Drosera, VFT's and even helis, and a carnivorous bromeliad.

We have all seen, heard about, observed, and even accommodated dormancy in many carnivorous plants. Sarrs in particular.

I visit these places quite a bit, at all times of year. Matthaei especially, being the closer one. The rooms where the sarrs are kept (in either garden) does not seem to ever get 'cold enough' for a proper dormancy, even in January, I am still comfortable in a T-shirt in those rooms. Yet the plants reliably go through dormancy, cease pitching in the fall, and bloom in the spring. Granted, I have not actually taken a thermometer to either one of these places to actually measure, but I feel like I am missing something here. Shouldn't these plants be cool? or is it possible their dormancy is being managed by natural light levels (given they live in a greenhouse) and water alone?

Their plants at Matthaei especially, seem robust and healthy, and they pitcher up a storm in the spring shortly after blooming. The Sarrs at FM do not seem as prolific, and I suspect that is the warmer of the two houses, since it shares a room with lowland Neps (Bicalc) and other tropical carnivores.

There is a local botanical garden here as well that grows their Sarracenia in a climate controlled indoor greenhouse. It seems that the seasonal changes in light are enough for most species to experience an adequate dormancy. Sarracenia purpurea purpurea may suffer a bit in those conditions but most other species seem to do just fine.

This greenhouse is heated to ~65F in the winter. Sarrs have occupied that bench for more than 20 years. Dormancy is more limited, they get long leaf retention, but they still flower and behave normally. It's also my opinion that photoperiod plays the strongest role for them. 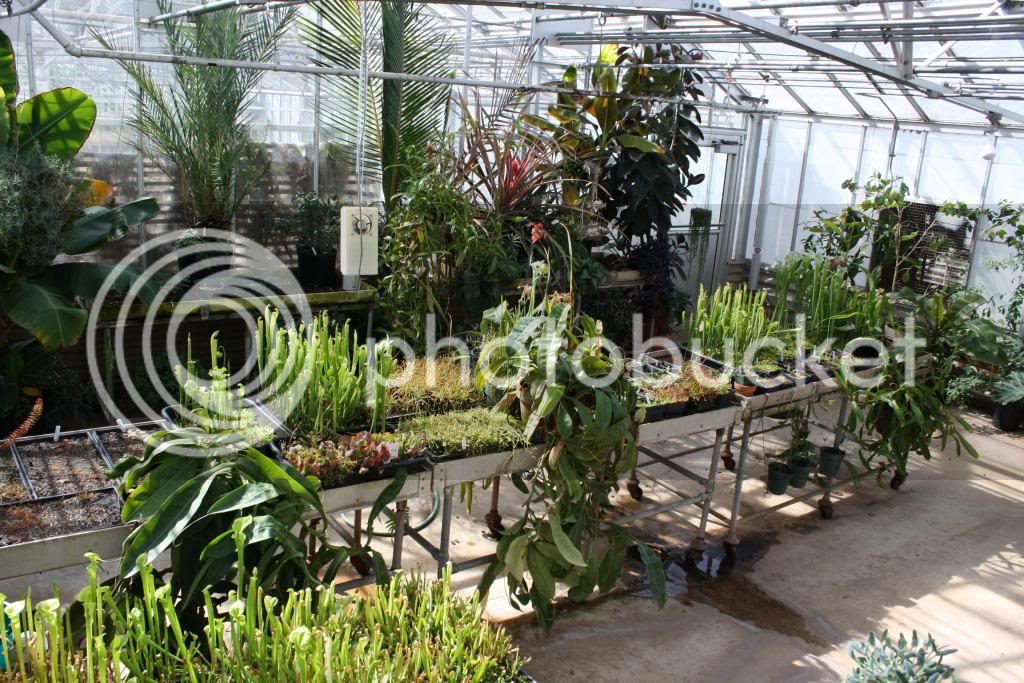 They go dormant for me even though I am in the sub tropical zone at high elevation. Day length changes do most of the dormancy. Then cooler nights. Even though my days in winter will creep up into the 70s. As stated before purpurea purpurea, the more northern forms do not seem to deal with this very well. They probably need cold temps that I can't achieve. It seems like dormancy is a two stage deal or two level deal. Day length changes initiate the first level. Then cold the second. For most the cold I think can be applied as a chilling hour model not unlike temperate fruit crops.
Last edited: Jun 19, 2014
You must log in or register to reply here.