Wanted to do a bit of an update on my collection of Pinguicula. I've learned a lot from growing them (and made plenty of mistakes already!!!). I think I have found a stable situation for them all now and am actually planning on enclosing the entire space and running a fogger through it which I think they will enjoy. Anyhow, have a look at some of the plants I've got going:

Here's a red vines tub that I put some turface on the bottom of and live sphagnum between the little pots. The pings seem to love it in here and springtail populations seem to have boom and bust cycles. Sometimes I can blow in there and hundreds of springtails will react. 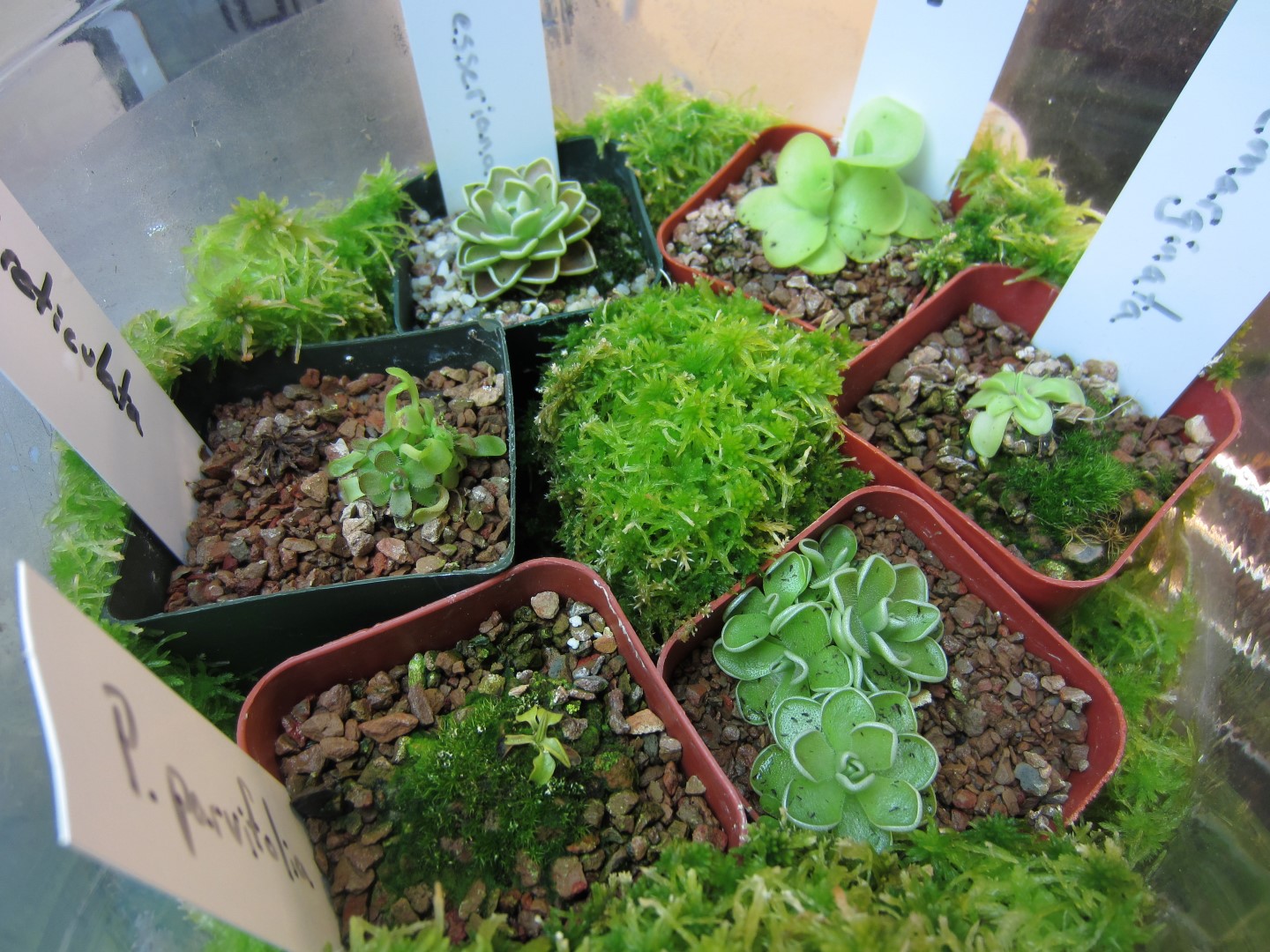 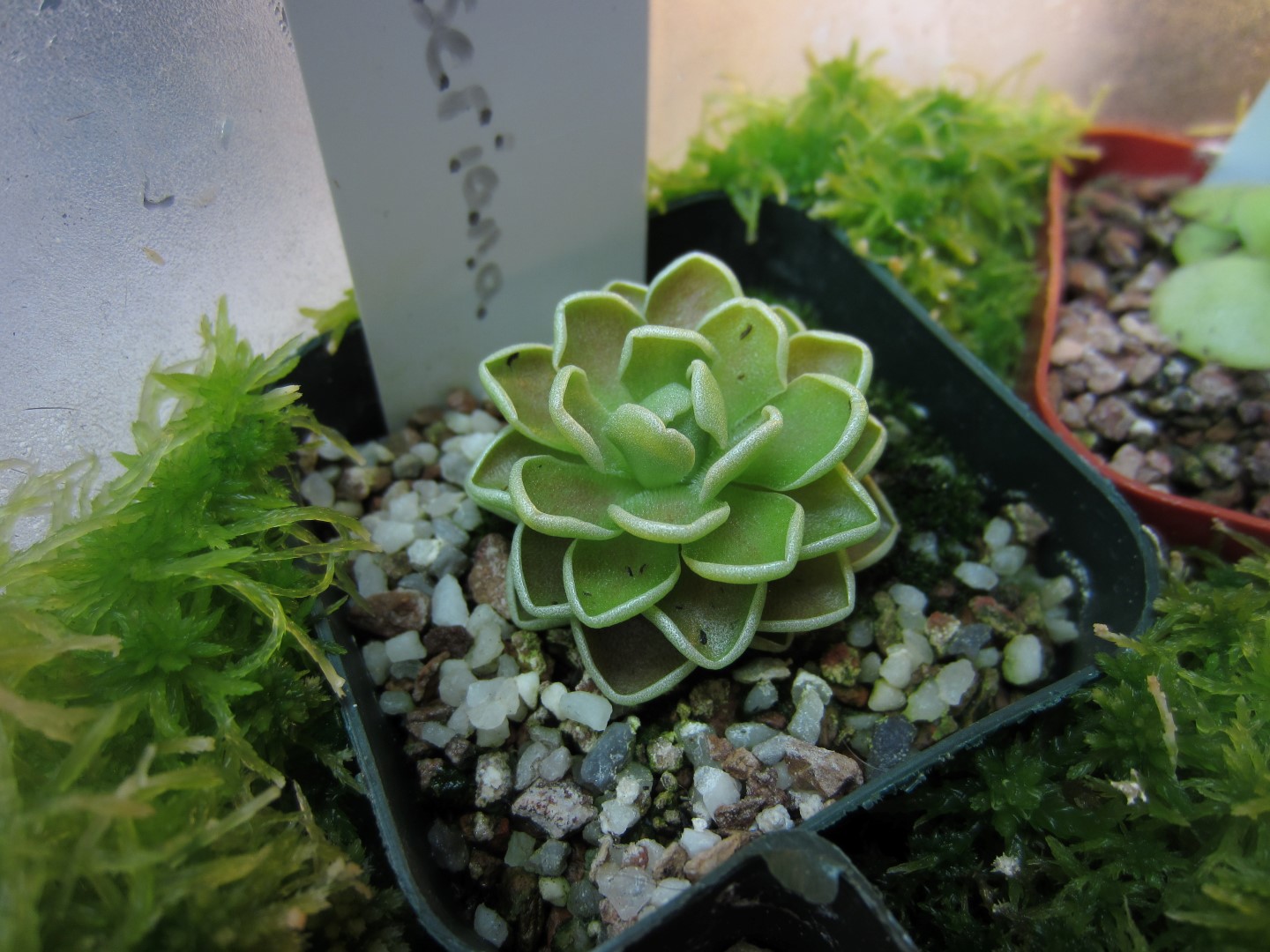 P. 'Gina' (Thanks to CactusDan for starting this from leaf pulling) 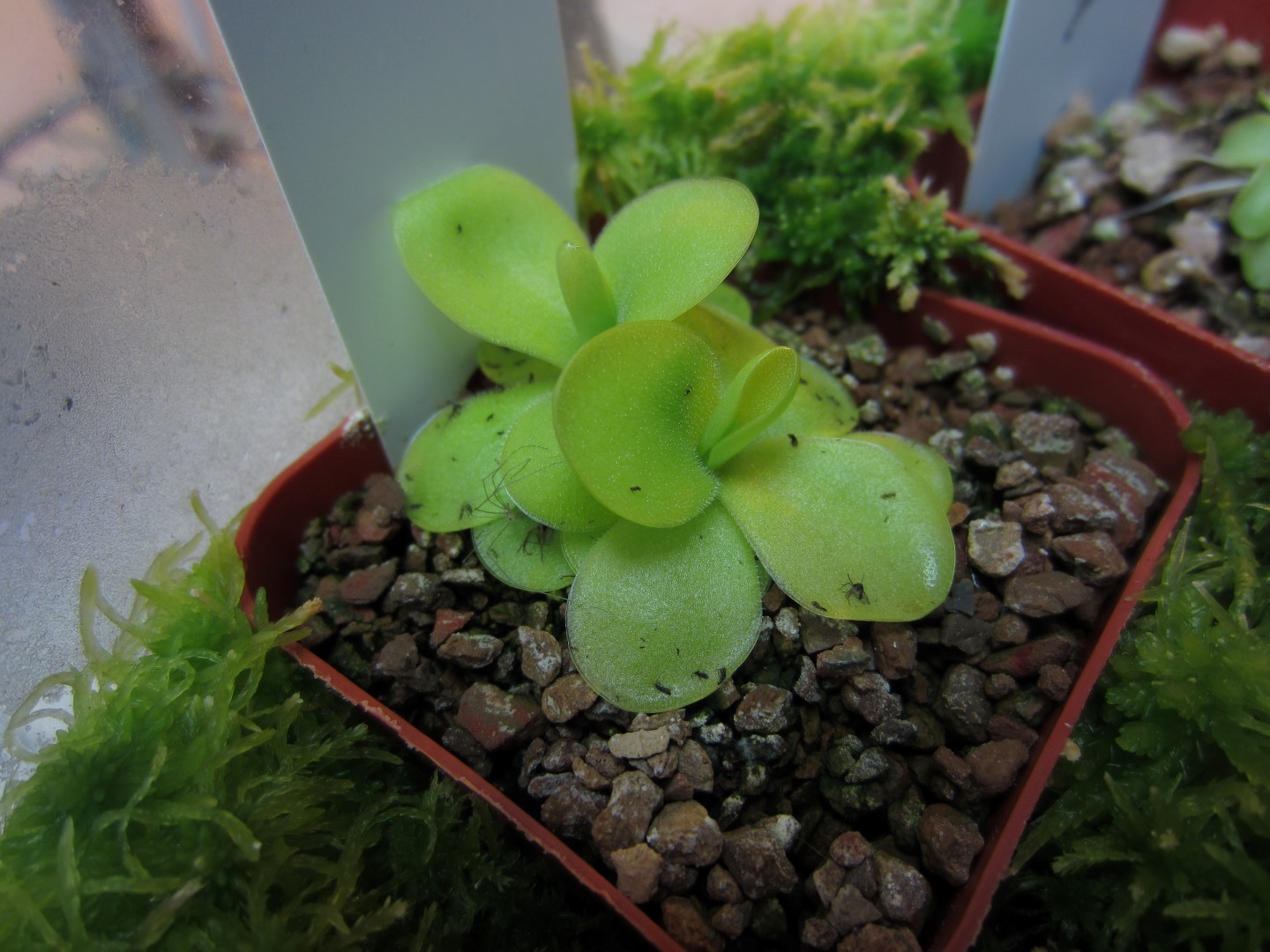 P. emarginata. This plant came pretty battered and is just making a recovery 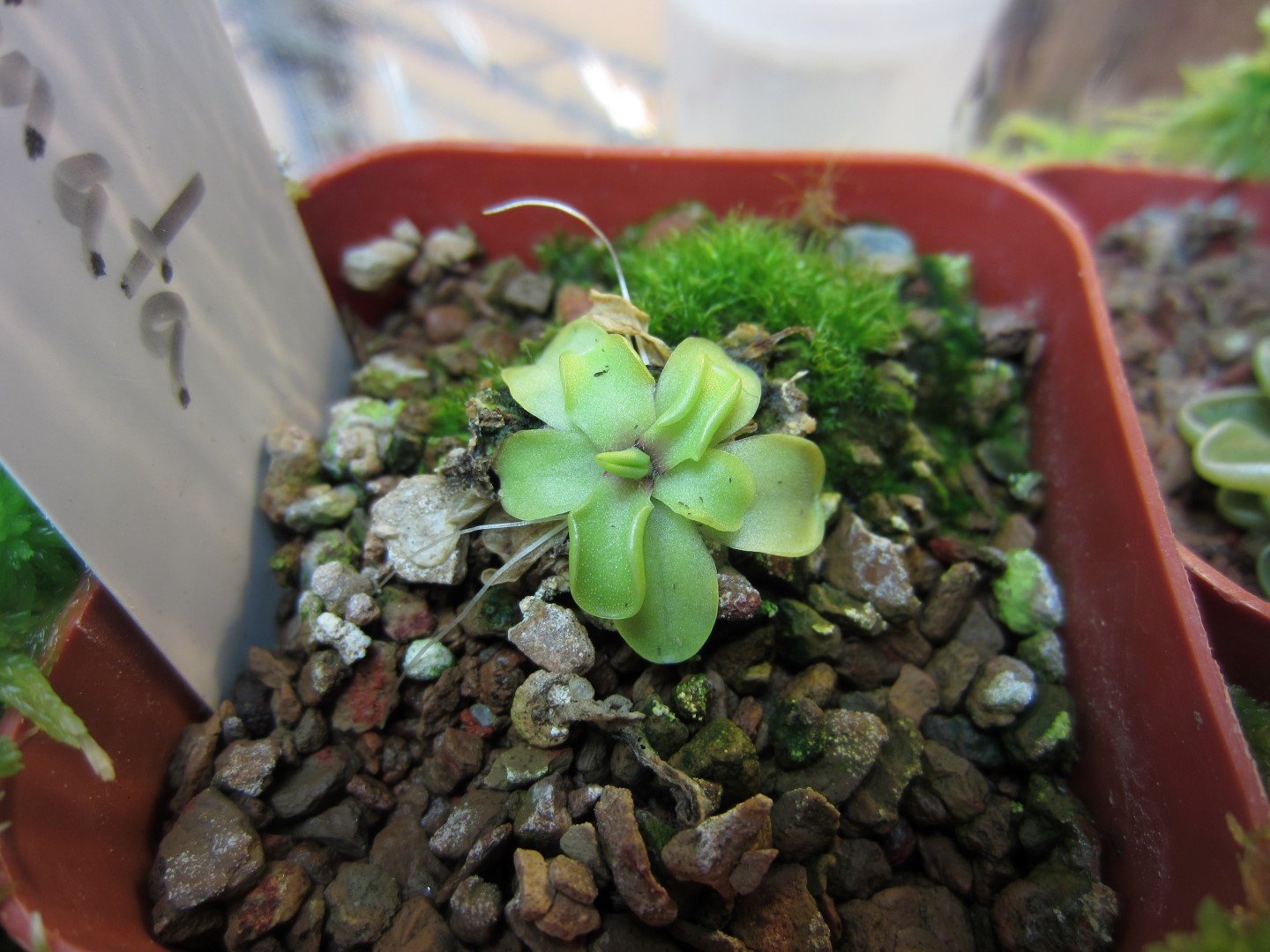 P. esseriana grown from pullings of the earlier plant that fell off during shipping. They're nearly the size of the original plant I received already. 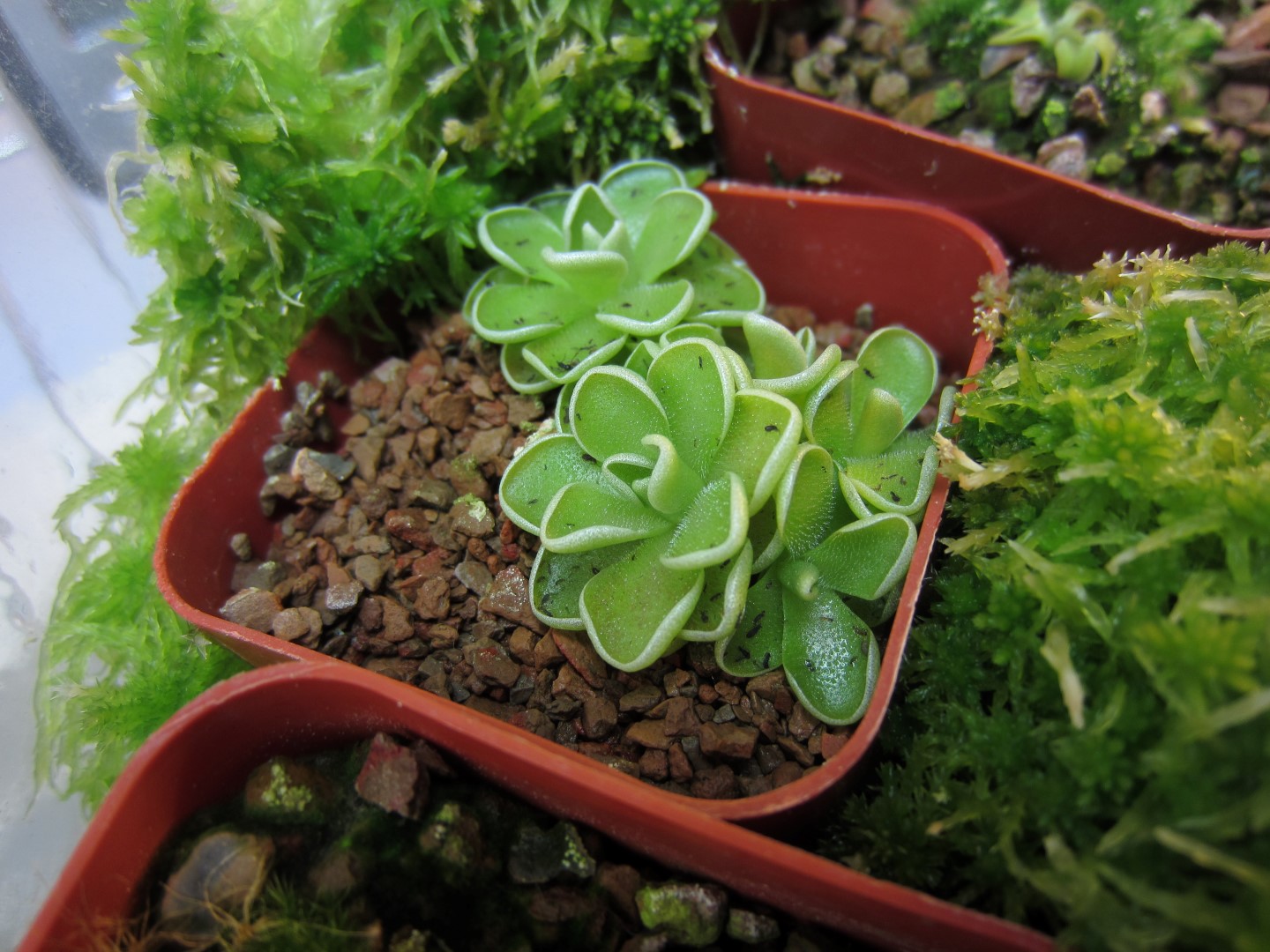 P. parvifolia. This one came in really bad shape. It's grown several small leaves and seems to grow them a bit quicker than they die off so I have hope. 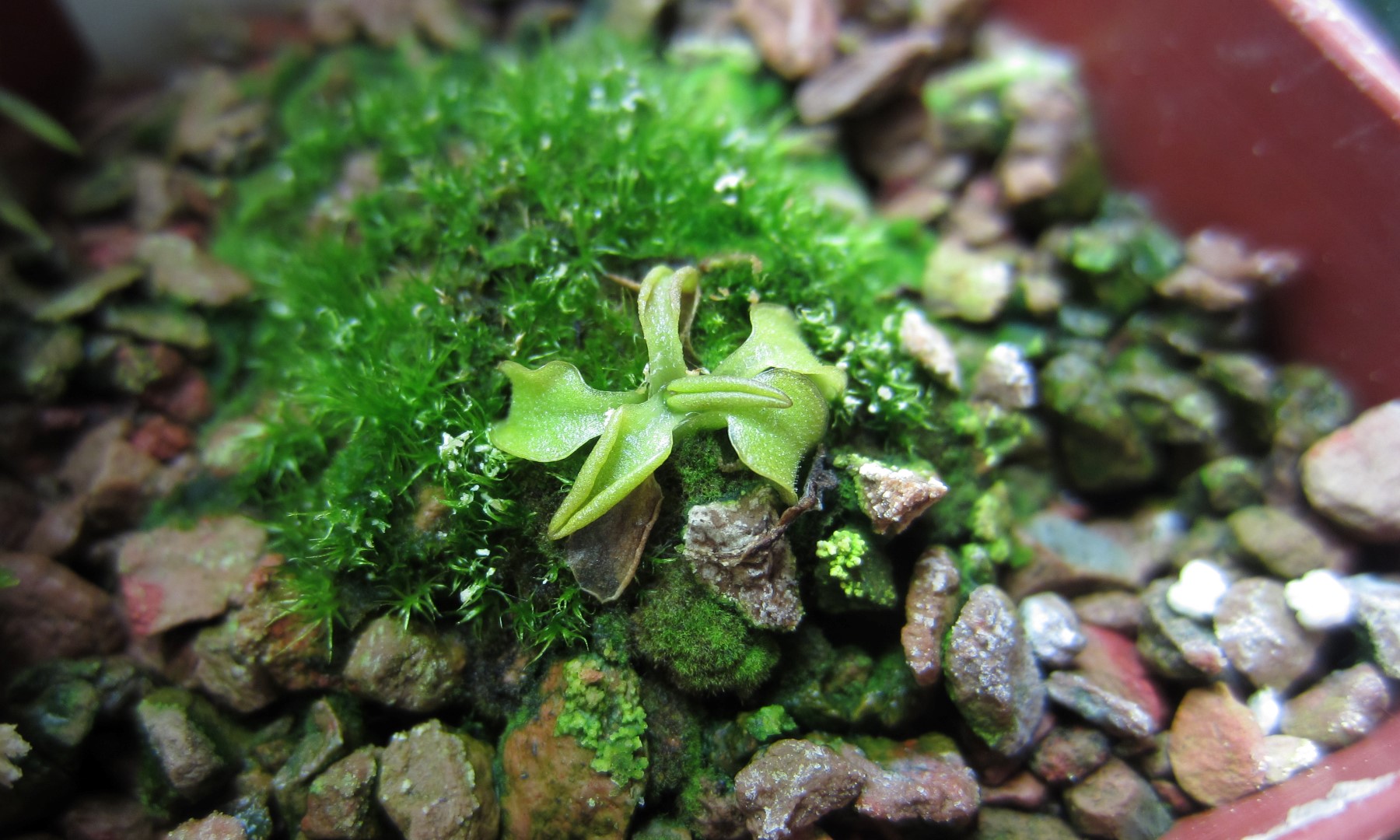 P. reticulata. I am aware that P. reticulata and P. kondoi are supposed to be the same. The place I ordered from had pings for both names listed so I was curious and got both. This one is not looking that attractive yet but has a few growth points. It came with another plant that did not survive. 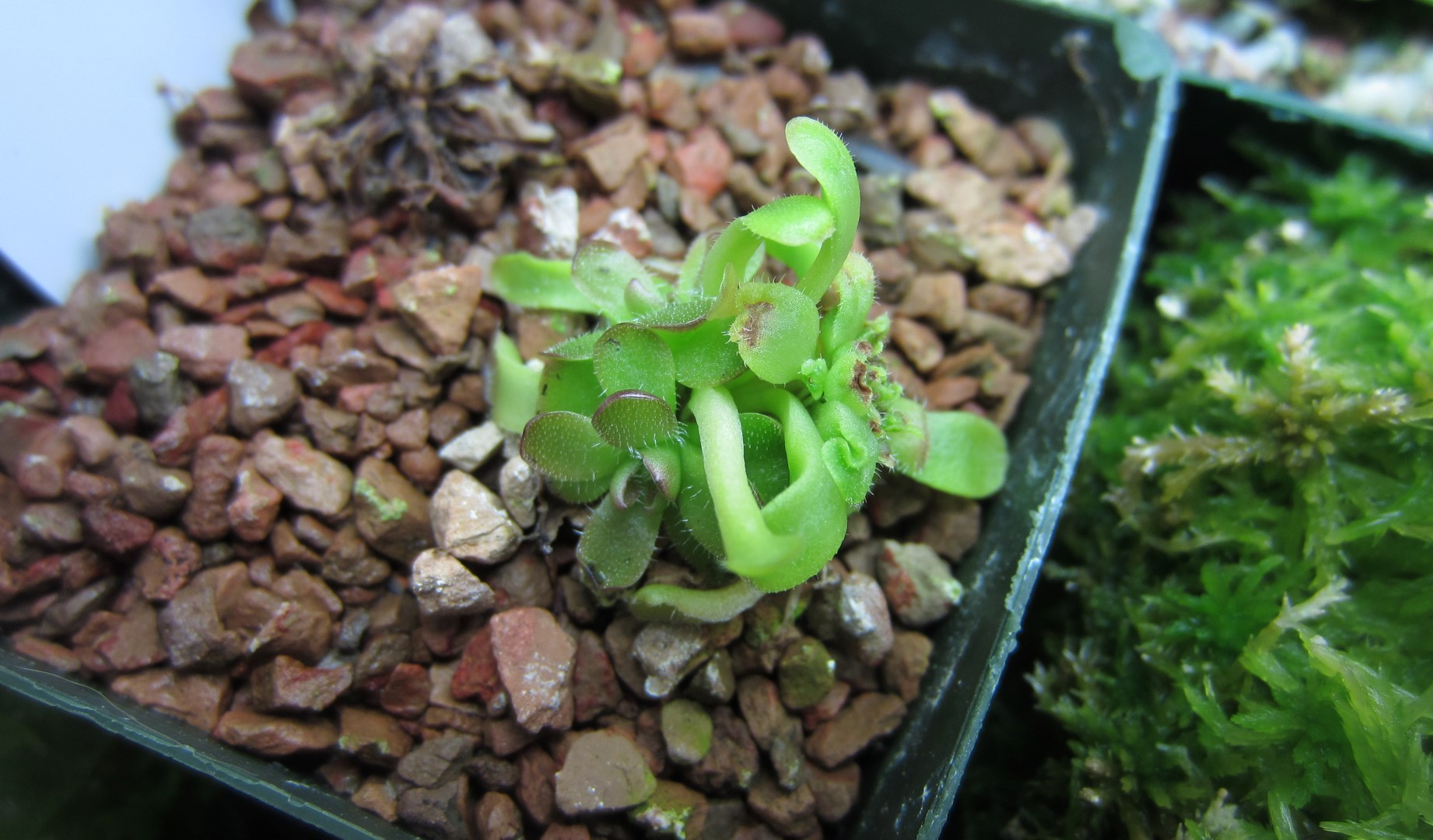 Here's the ones I got as P. kondoi 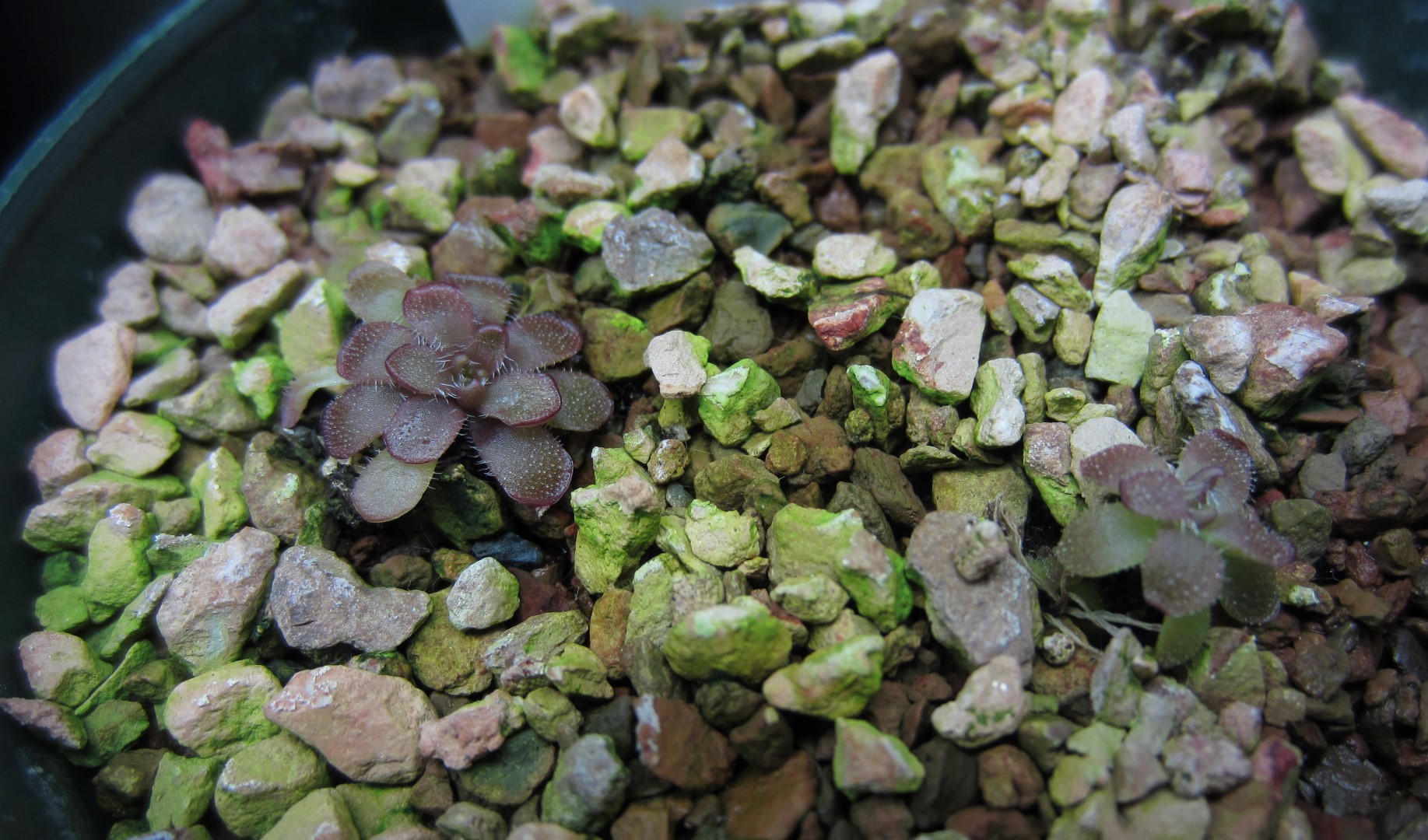 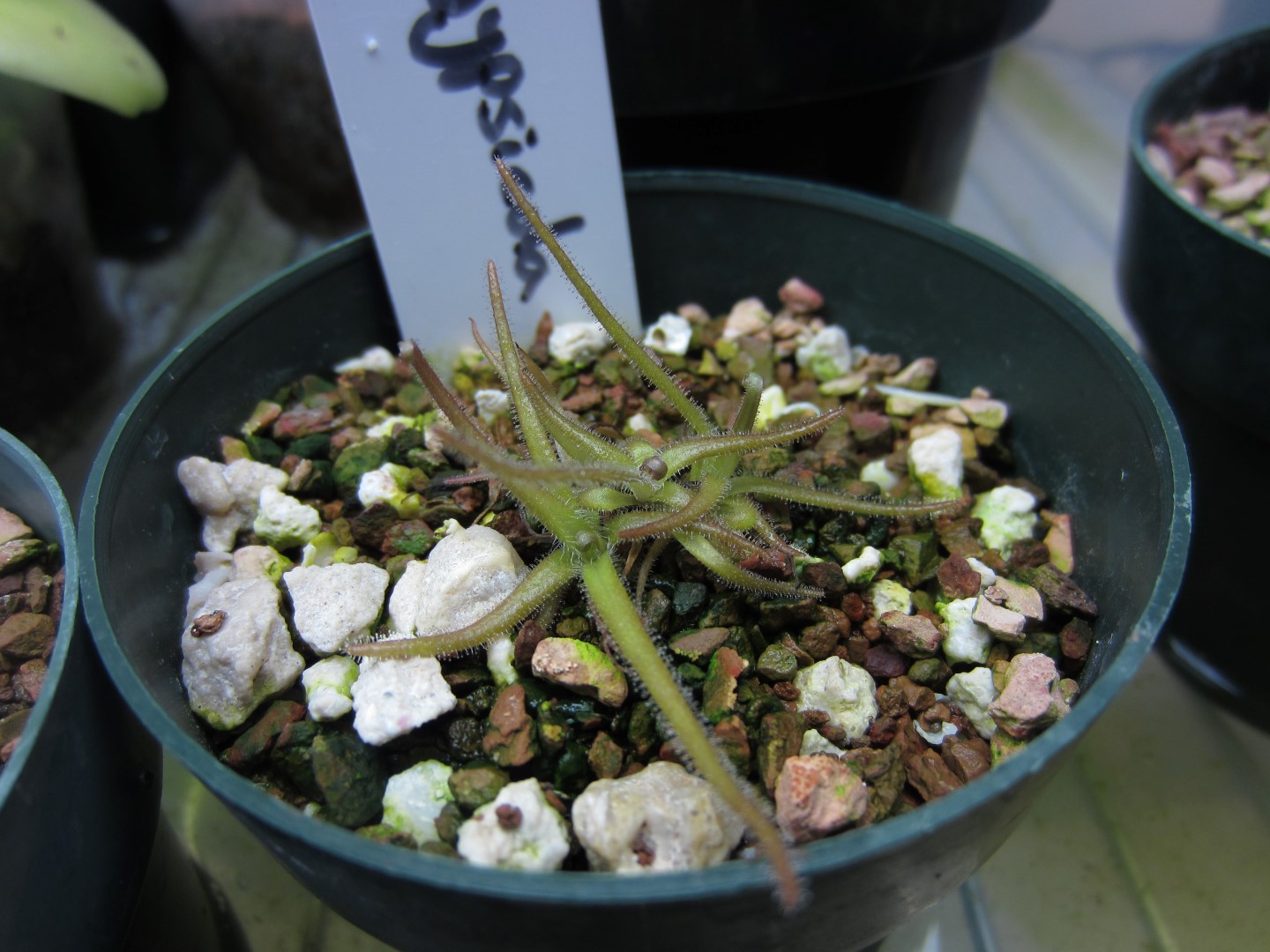 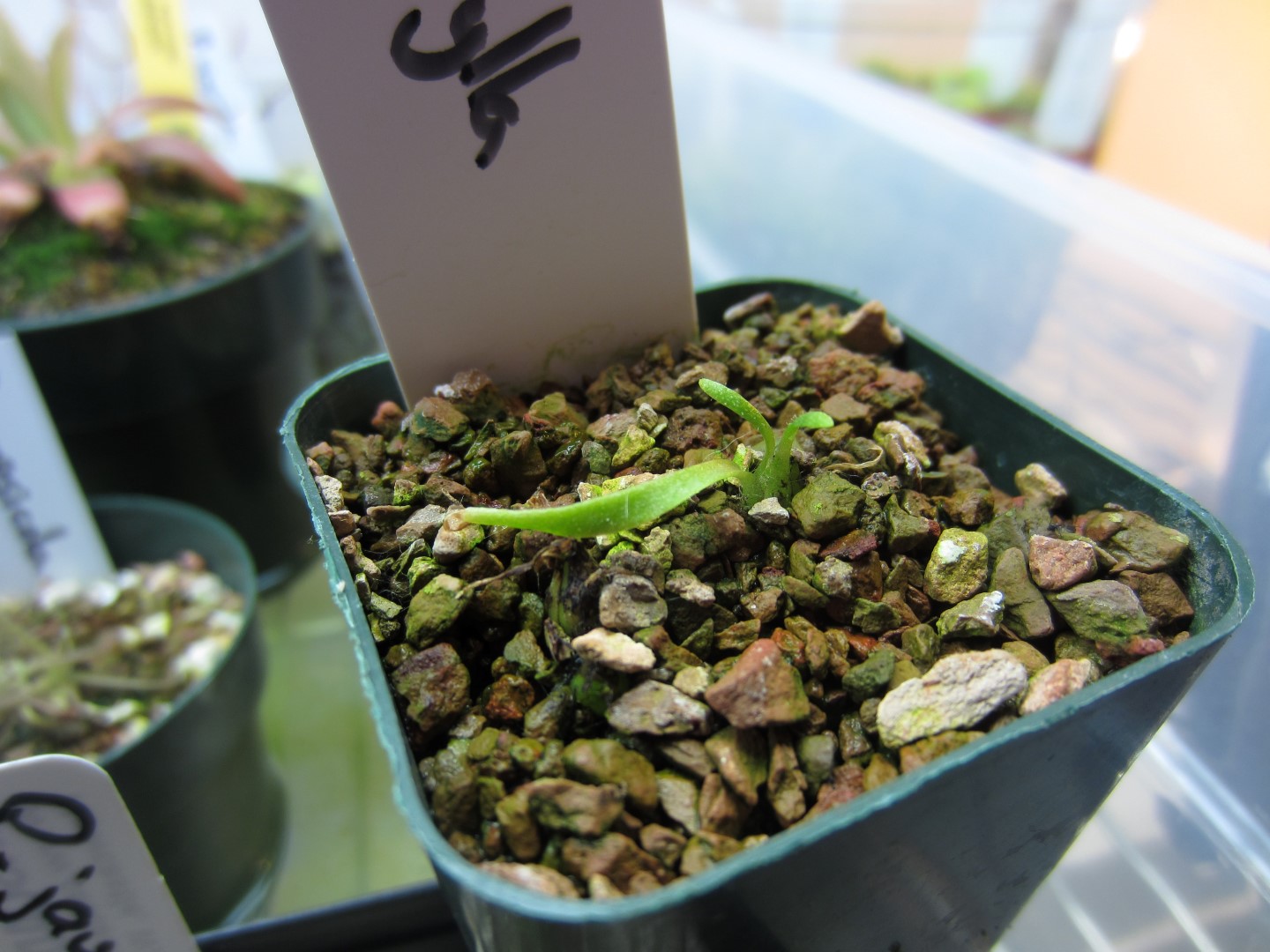 P. medusina. The main plant did not survive but one of its leaves sprouted from its tip so I'm hoping this little plantlet will grow well. 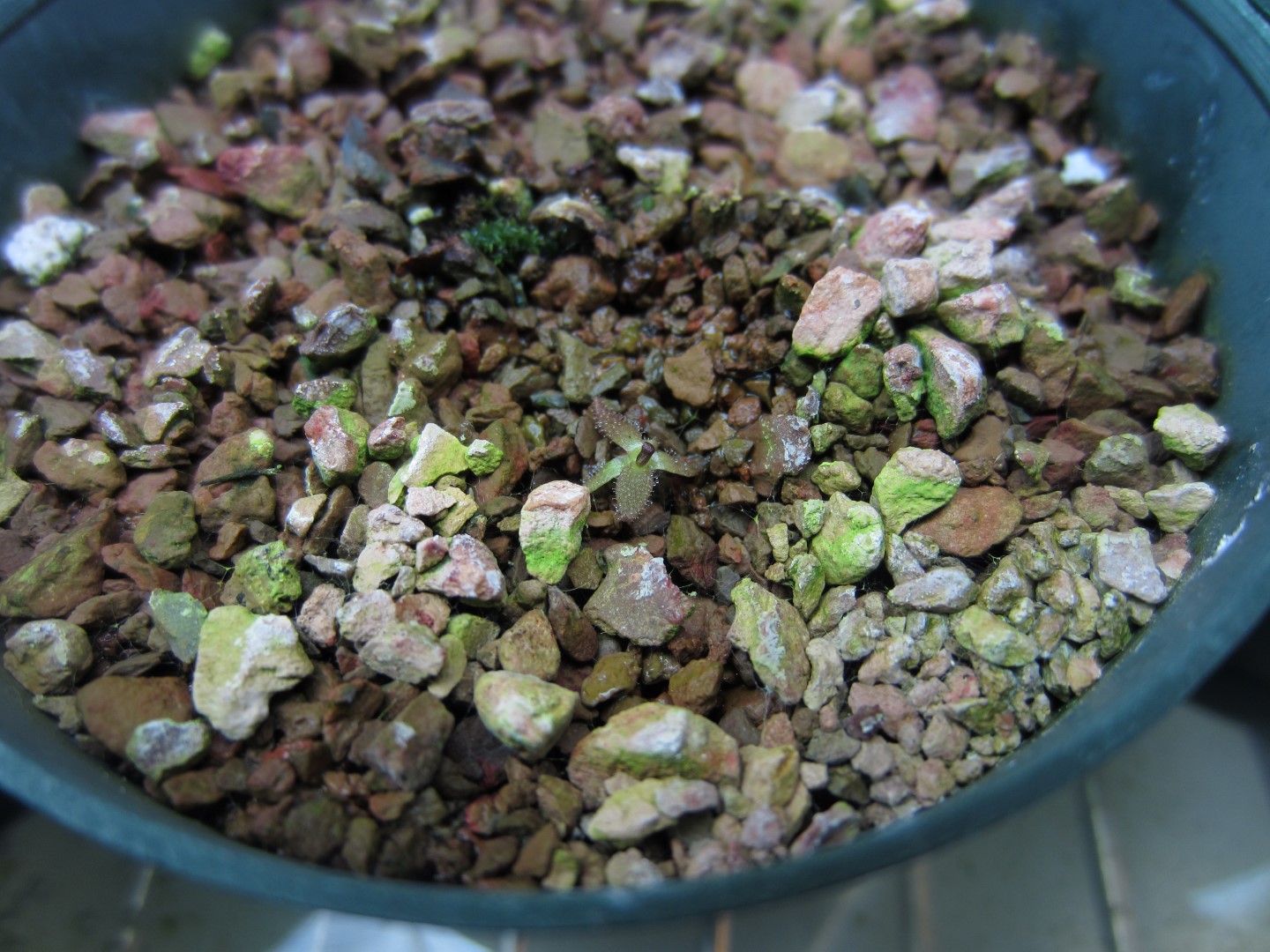 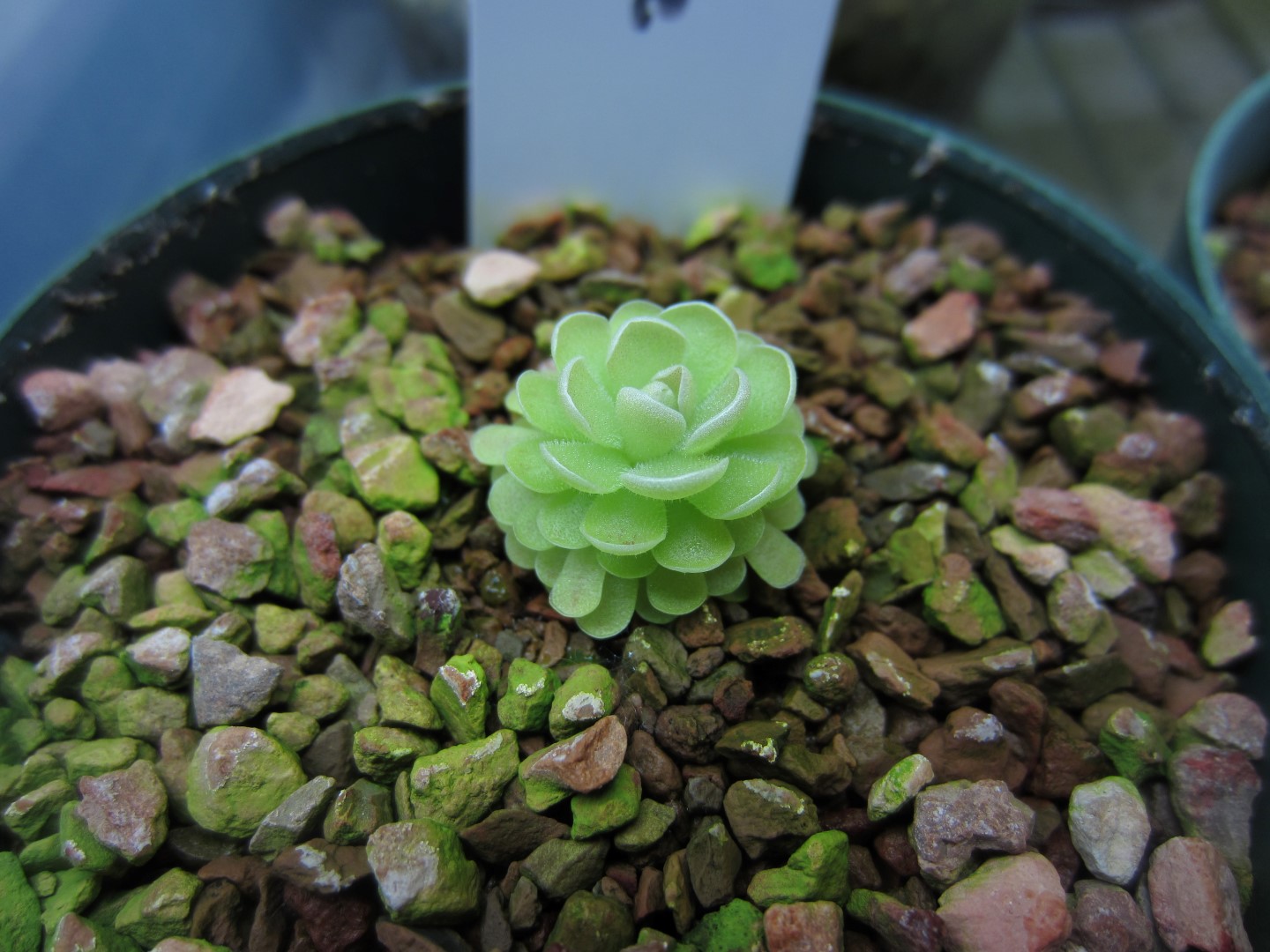 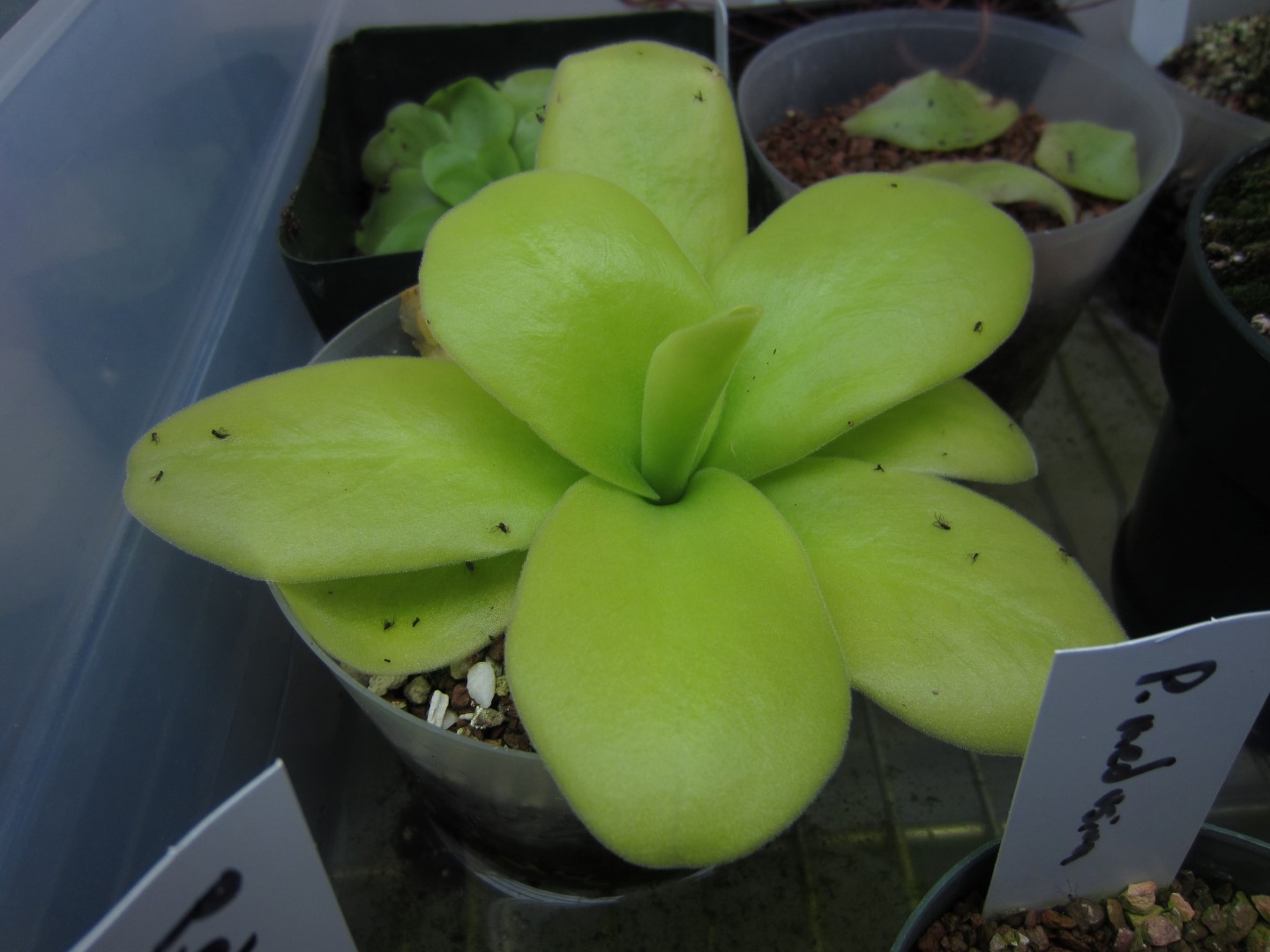 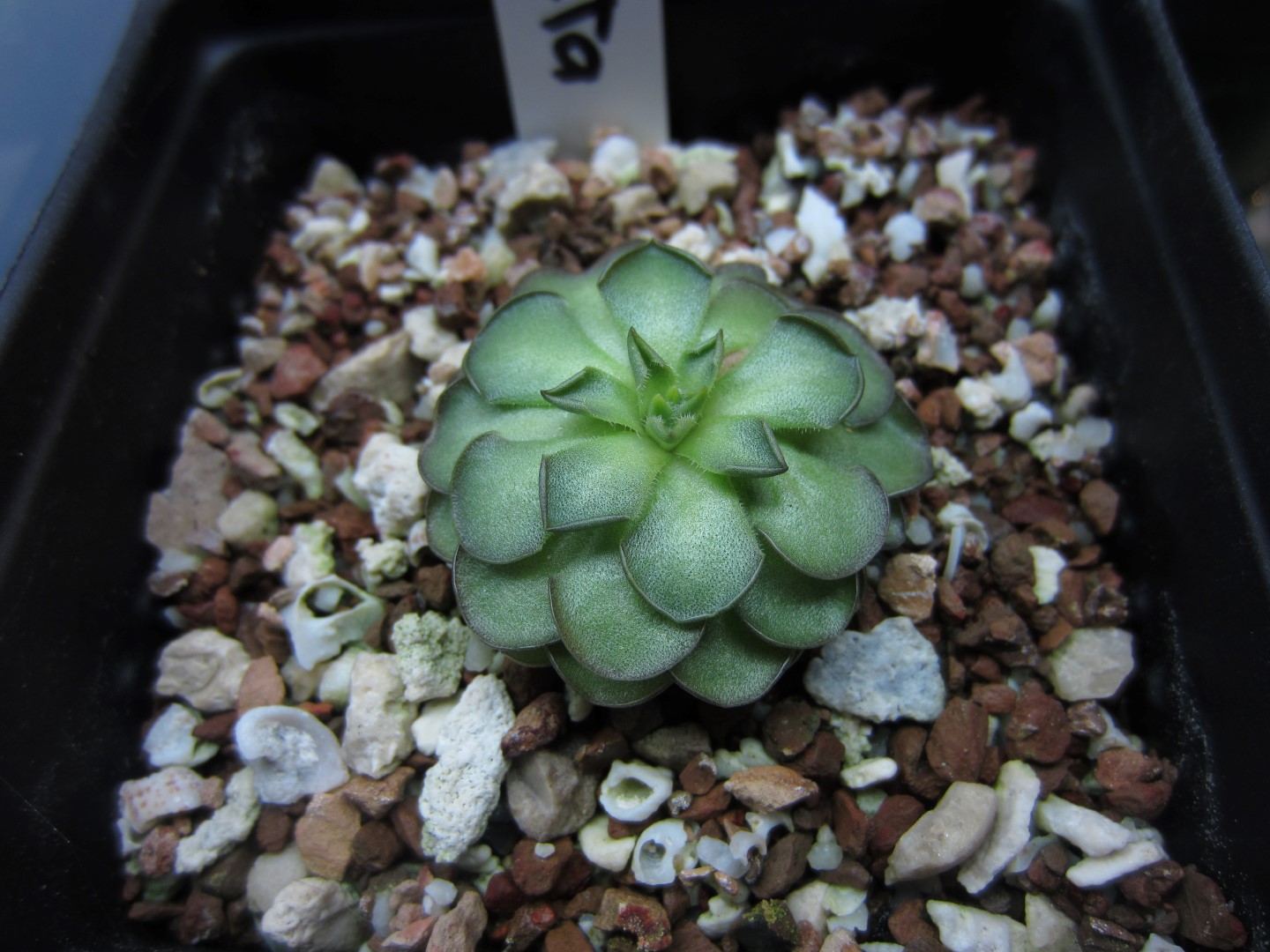 P. laueana got confused and wanted to go dormant in the summer. It has started to grow carnivorous leaves again at the wrong time of year but it's all my fault. Hopefully it will survive ok anyway. 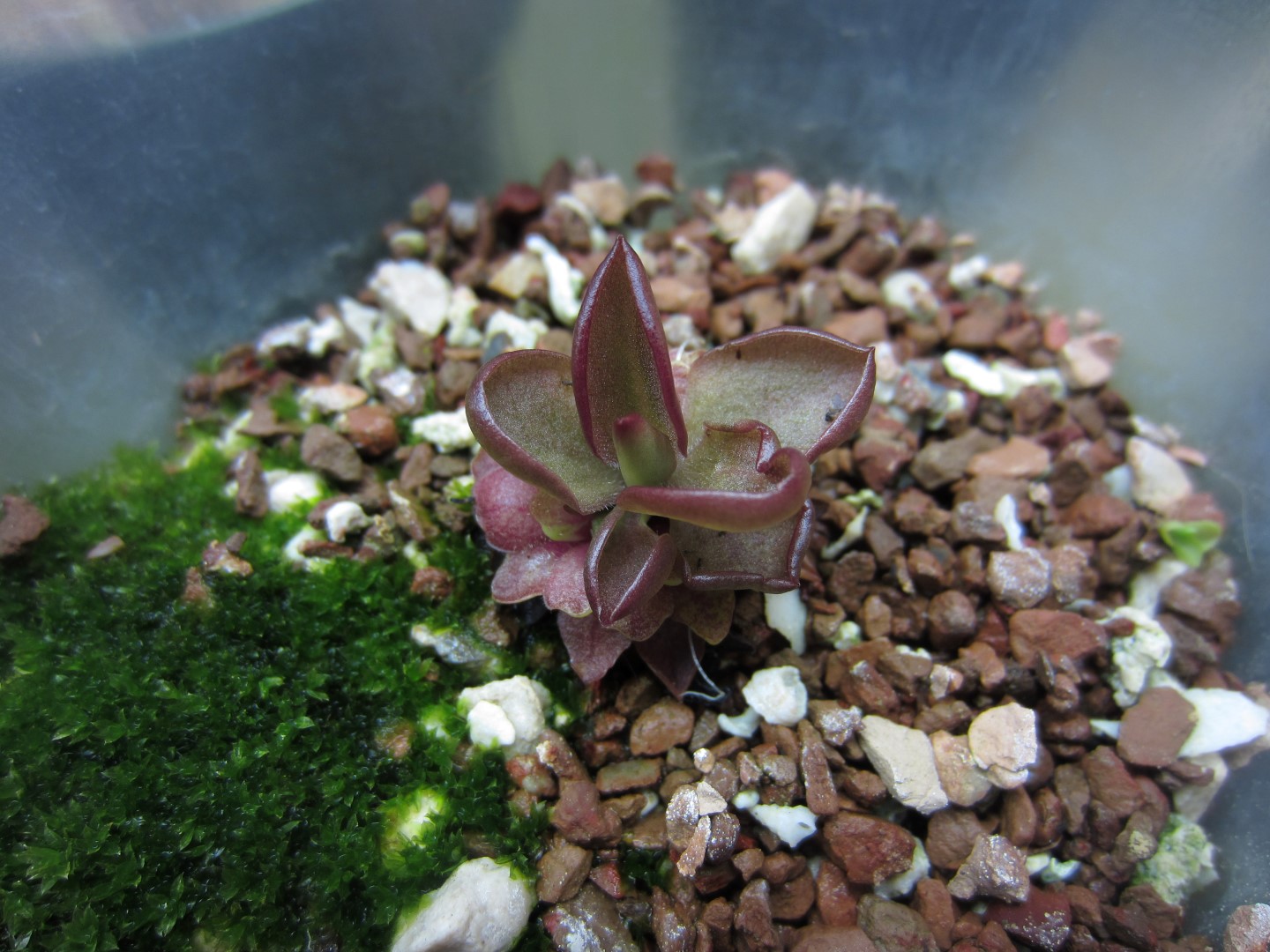 P. jaumavensis that also somewhat seemed to think it was time to go dormant and had stalled out for a while. It's back to growing for now. 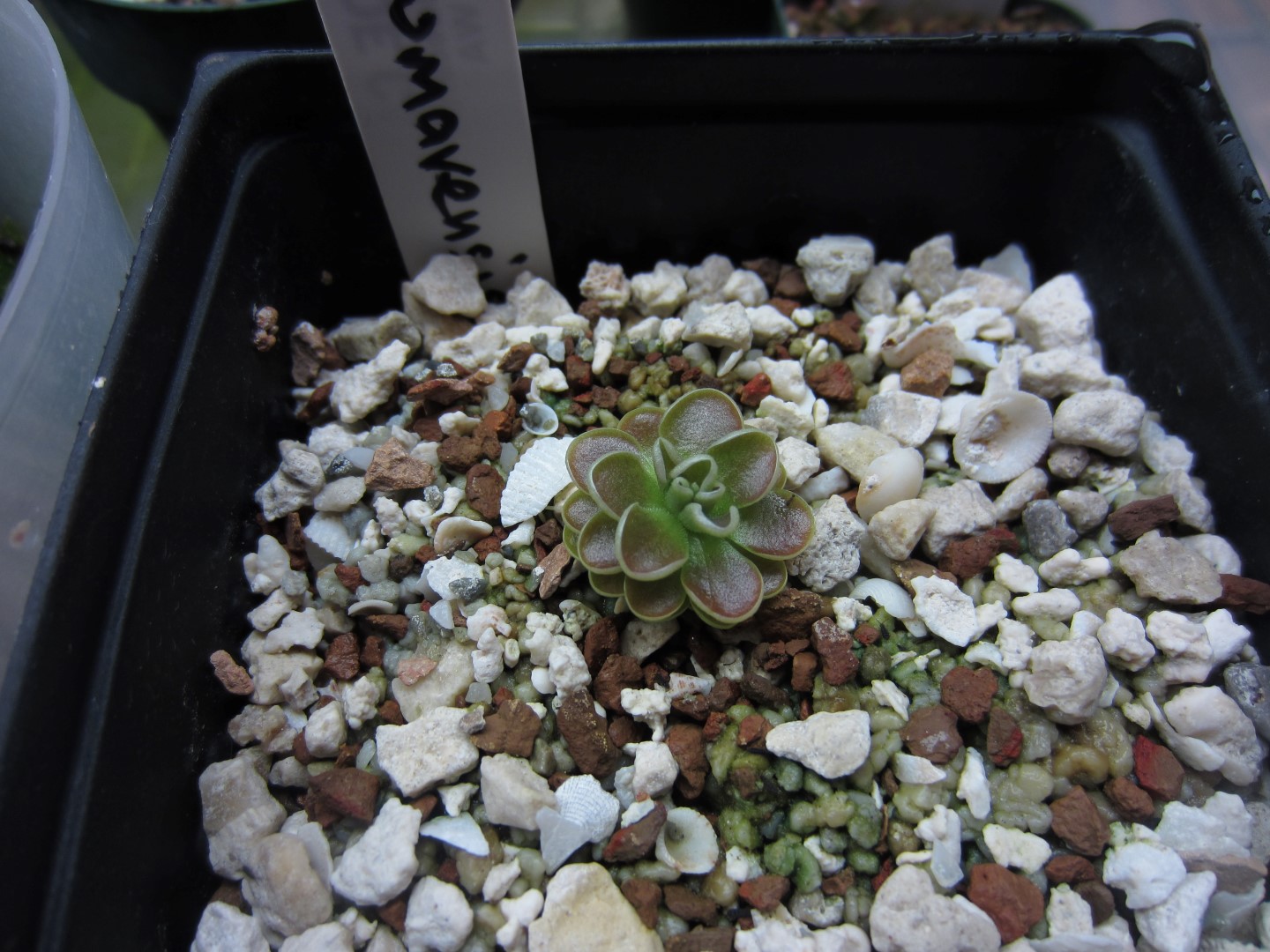 P. 'Aphrodite'. One of the rare times it hasn't been in flower since I got it in the spring. 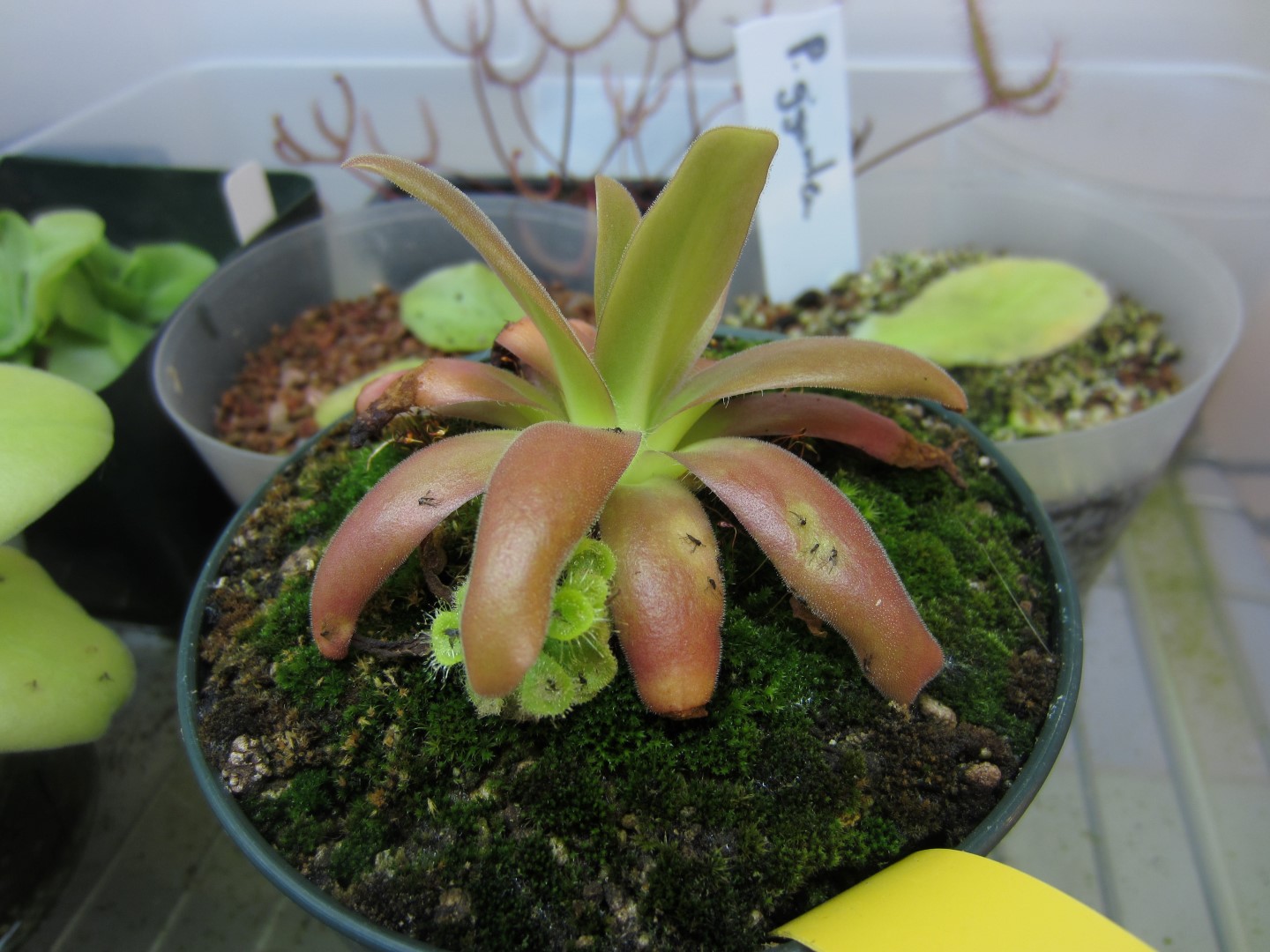 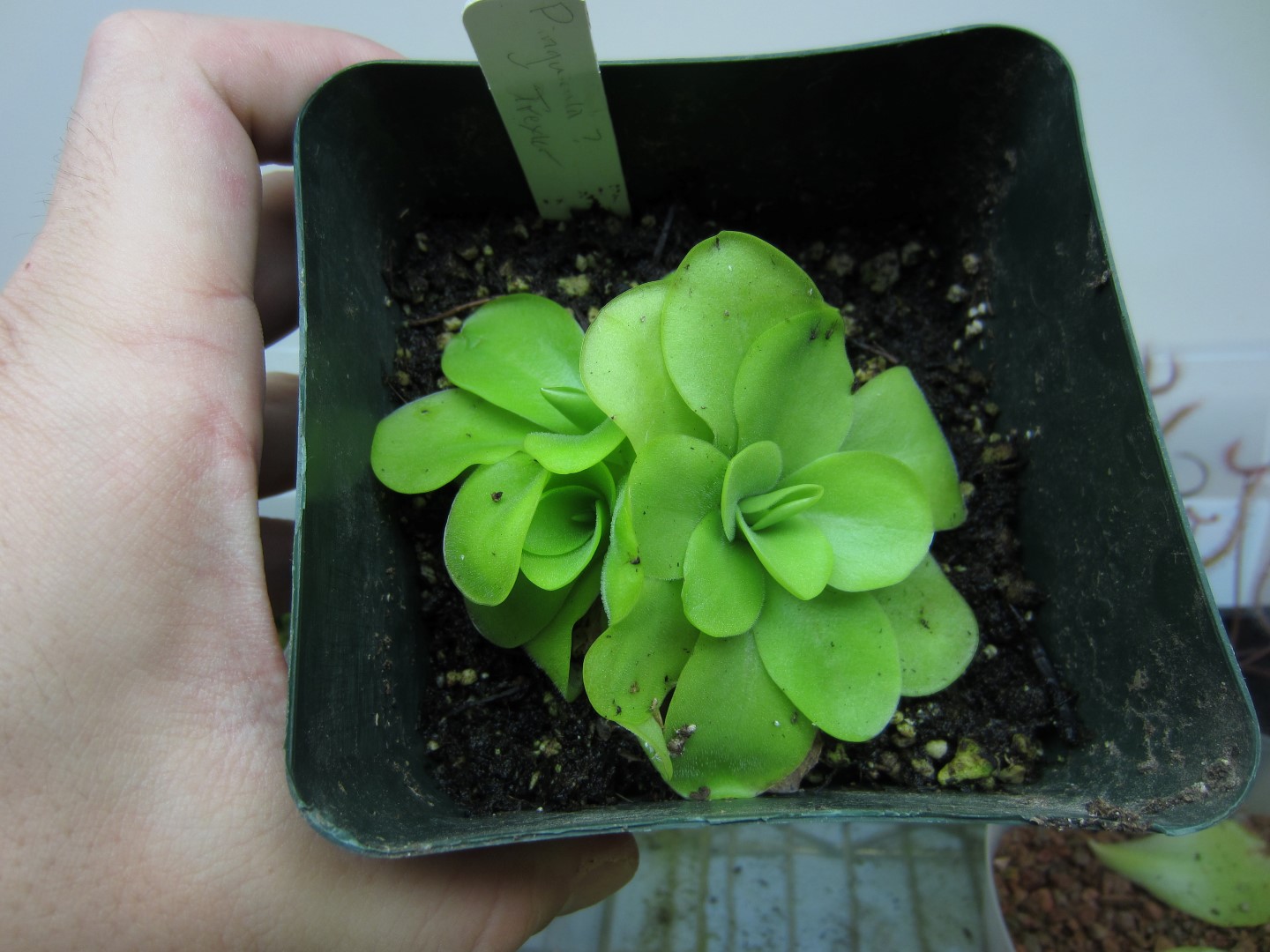 And well this ping doesn't really fit in here but I'll put it anyway. It's P. primuliflora growing on a rock on live sphagnum. 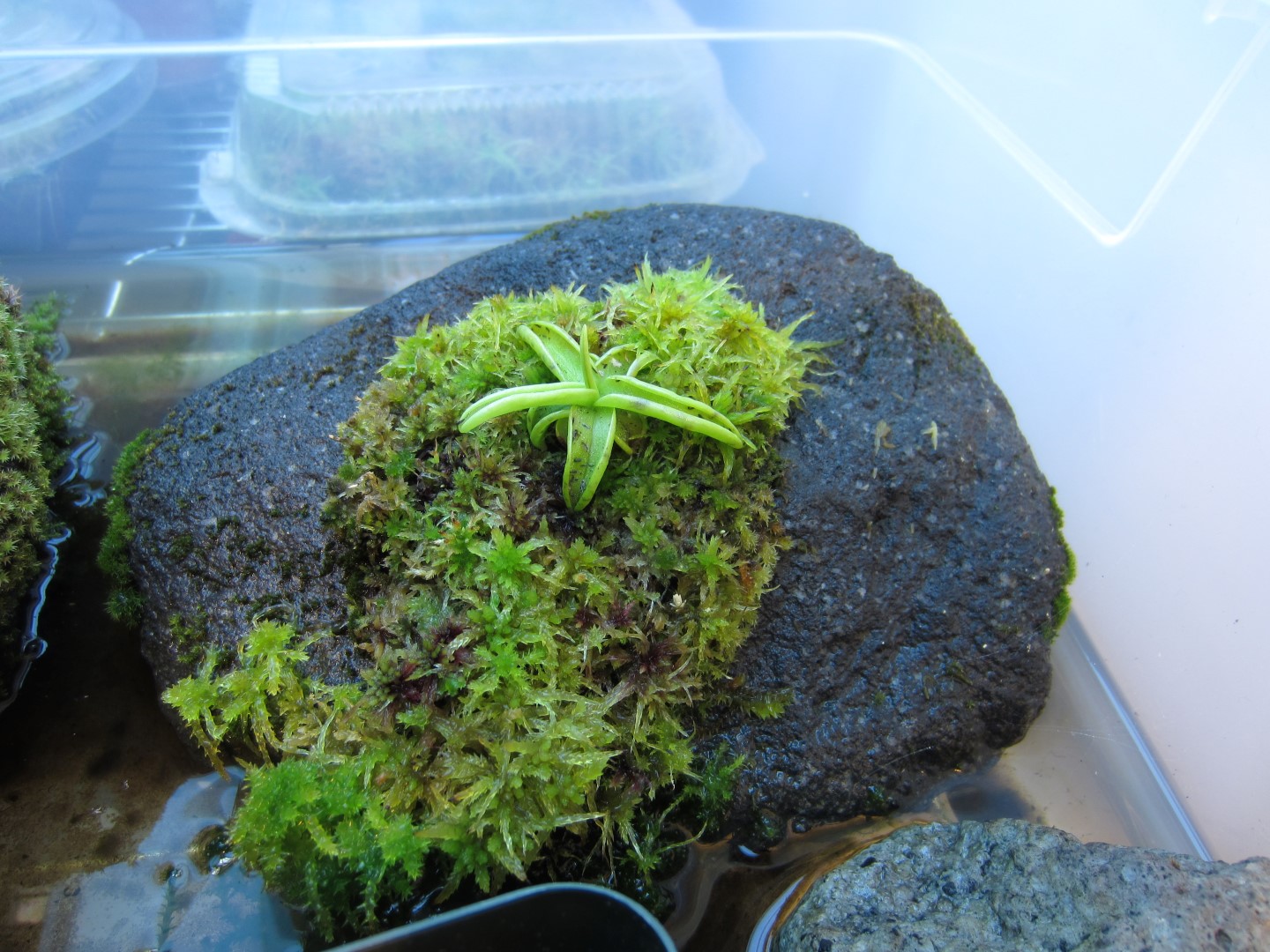 Awesome reticulatas/kondois. I got some in my order from BCP, I wonder if they are different clones. Once mine finally grow some roots and settle in, we can compare them.

Nice plants! The P. primuliflora on the rock is really interesting.
Just as a note on P. emarginata - in my experience they only make those sort of shorter "crinkly" leaves like in your picture when they're too dry. They should generally have more oval-ish or spatula shaped leaves.
This species normally grows on shaded walls in a wet sort of moss or humus layer, and is used to getting more water than the other Mexican species.

That is a nice collection. You even got ahold of my favorite Mexican species!

what substrate use you ?

Jeff 2, mostly turface and I have added crushed coral for some of the plants as well as a little bit of iron oxide powder. The P. jaumavensis I added a bit of cat litter. They are not all the same mix. I am still looking for some of the materials I see listed in substrate recipes...just tonight Nimbulan and I were trying to figure out where to get decent coarse-grained sand. I am a newbie so very open to further suggestion! By the way Jeff2 I love your plants and you are always making me want to get more pings! I just ordered 8 species of Mexican and temperate pinguicula and 3 hybrid plants over the weekend

Whoa... you have P. gypsicola! I would kill.... I mean wound slightly for a even a leaf! Do you do trades? Check out my pictures, if you're interested:

Want some gypsum for the gypsum species? I got more than I needed from the Portland Nursery.
S

jimscott - Unfortunately I am still a beginner with these so I'm just focused on trying not to kill it at the moment. If I manage to propagate it I will surely come to TF first!

Benurmanii - Sure I will take some off your hands. I would be more than happy to split the cost with you as well.

P. 'John Rizzi' The nicest condition of the bunch 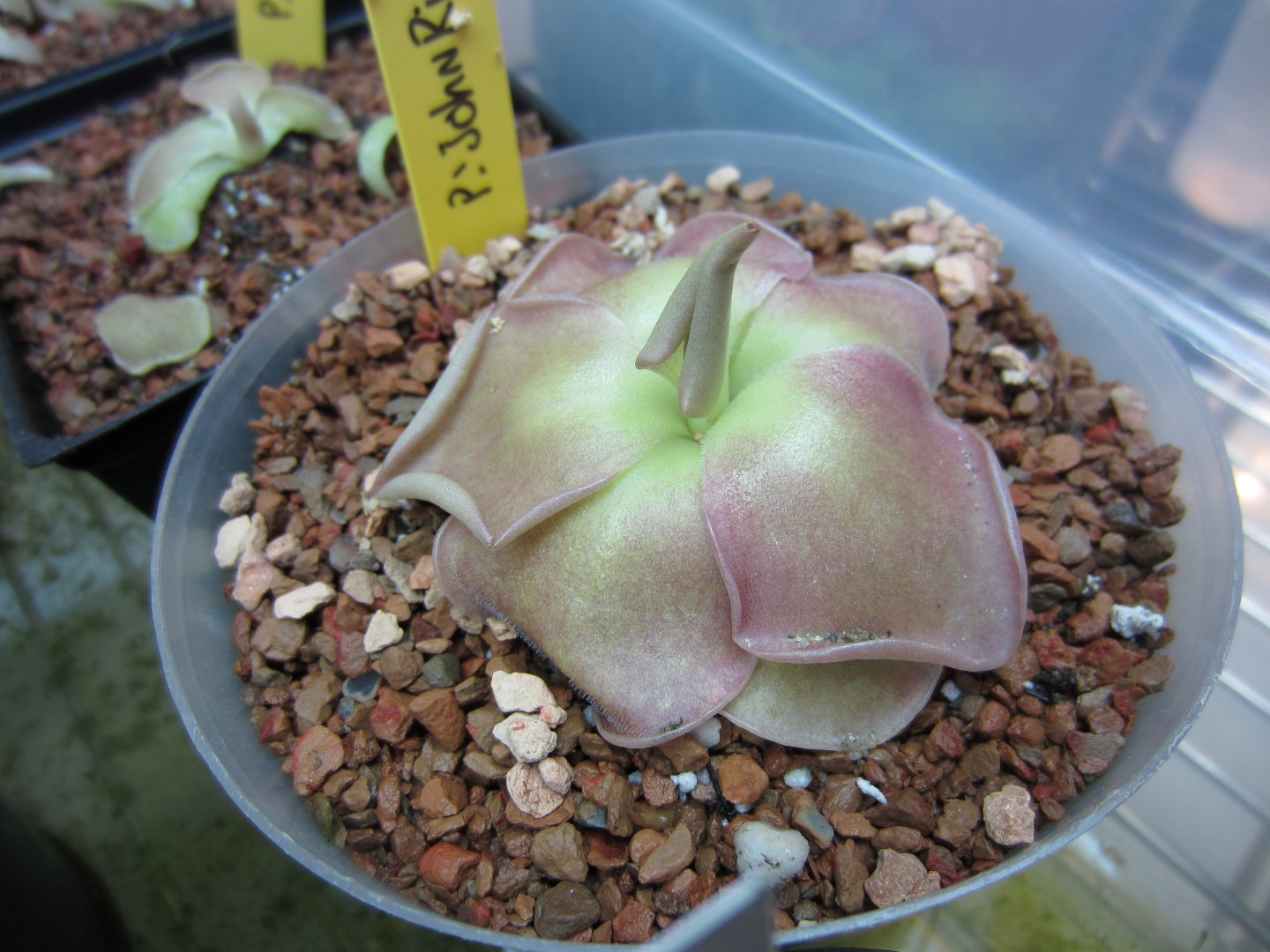 P. 'Kewensis' Looks like half a plant but should be fine 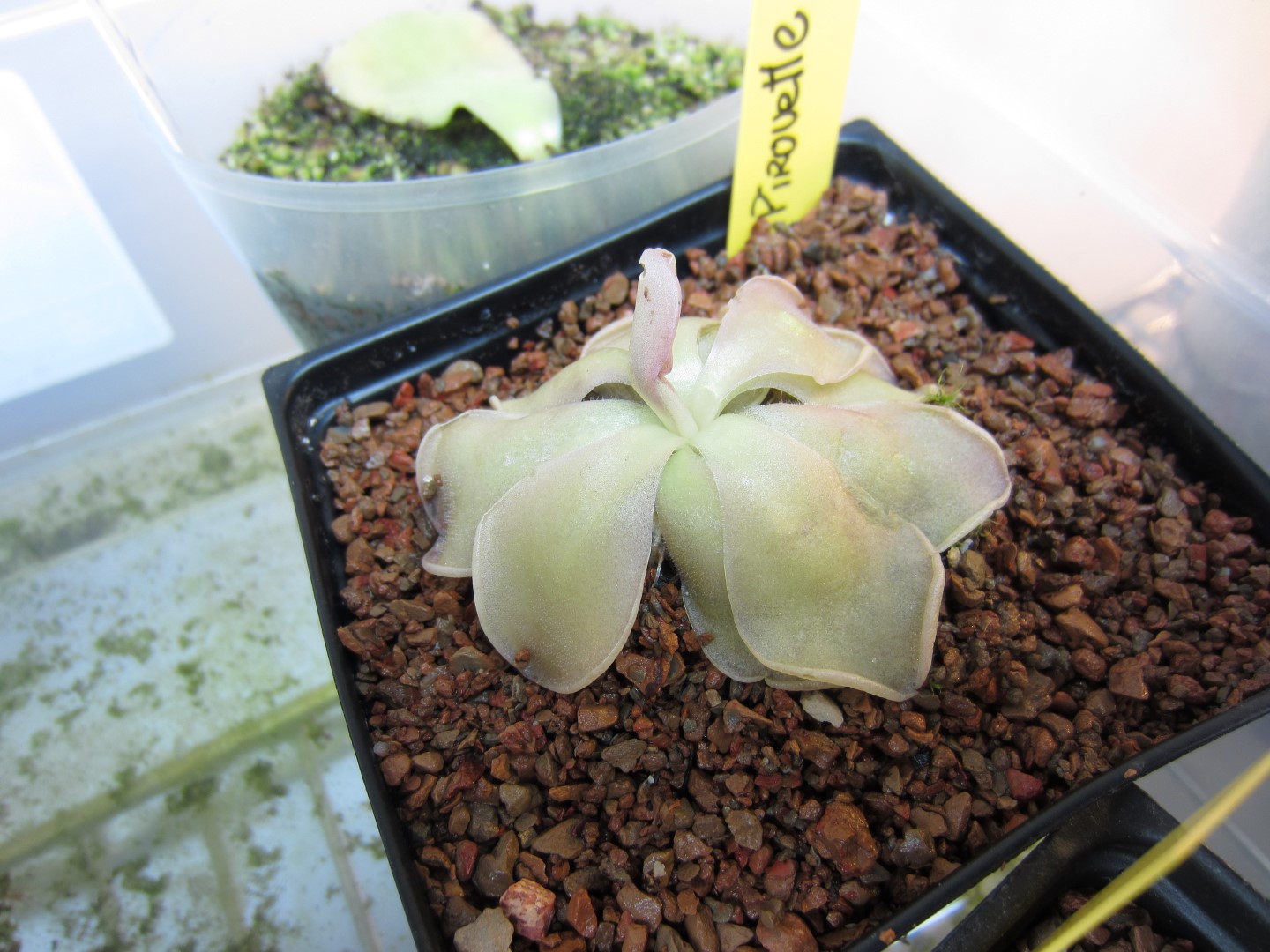 what temperate species have you bought ?

Jeff I do not have any plants but these seeds are coming right now: P. corsica, grandiflora, macroceras ssp. nortensis, poldinii, and vulgaris. Don't know if I will have any success but figure I will try!

actually , these species are in hibernacula for the winter , it is not the season to sow .

for me there are two seasons for sowing , just after the seed capsules or so in April-May.

meanwhile, you can very well leave them in the bottom of your fridge, to sow in spring.

if that had been bubilles, you could have put them directly into the adequate substrate.
Last edited: Sep 24, 2016
S

Hmm Jeff I wish I knew French so we could communicate better. My intent was to sow the temperate seeds outdoors in an unheated mini greenhouse and let them naturally stratify. I had read that the beginning of autumn is acceptable to sow temperate Pinguicula but it sounds like according to you I am mistaken!

I trust you know what you're talking about but am not sure I quite understand. You said there are two seasons for sowing - what is the other season besides April-May?

I'm pretty sure it's just a language barrier. I ran Jeff's post through an online translator and I think he's understanding the term "sow" differently. It seems like he's taking it to mean that you've already done stratification, so you'd be attempting to germinate the seeds immediately and then they'd be too small to make it through dormancy. He recommends storing seeds in the fridge and then sowing in spring, after appropriate stratification treatment of course.

I have to say online translation for French->English is actually quite good. The output is far more readable than most languages.
Last edited: Sep 25, 2016
S

Jeff 2 thank you for your informative response! I love the internet. It is good to read of your experience. Perhaps I will split up some of the seeds and sow some in the autumn and leave others in the fridge. As for the seeds I got, they are P. corsica Bocca di Verghiu, P. grandiflora Ireland, and P. vulgaris Interlaken.
Last edited: Sep 25, 2016

it is an excellent idea .

these 3 are acid species .

this spring I go to " col de vergio " in Corse see , here 'in situ' the specie corsica f corsica In my recent ping adventures someone mentioned this old thread about propagating Mexican pinguicula from leaf pullings. I am trying the technique and so far it has worked very well. I had very mixed results from the variety of ways I'd attempted before so have been looking for a more surefire path to success. Here's some results so far after putting leaves in baggies of damp sphagnum with Trichoderma harzianum powder (a product called rootshield). I have seen no indication whether or not the Trichoderma powder has had any affect but it certainly hasn't seemed to hurt the process. The only species I left out is P. ehlersiae which I didn't get a good picture of. P. gigantea. One of the four of these I started has a leaf where maybe 1/5th of it has died back but all of them have plantlets forming. That one leaf is the only ping leaf with any negative signs but it is likely just due to the large size of the gigantea leaves in the small plastic bag. 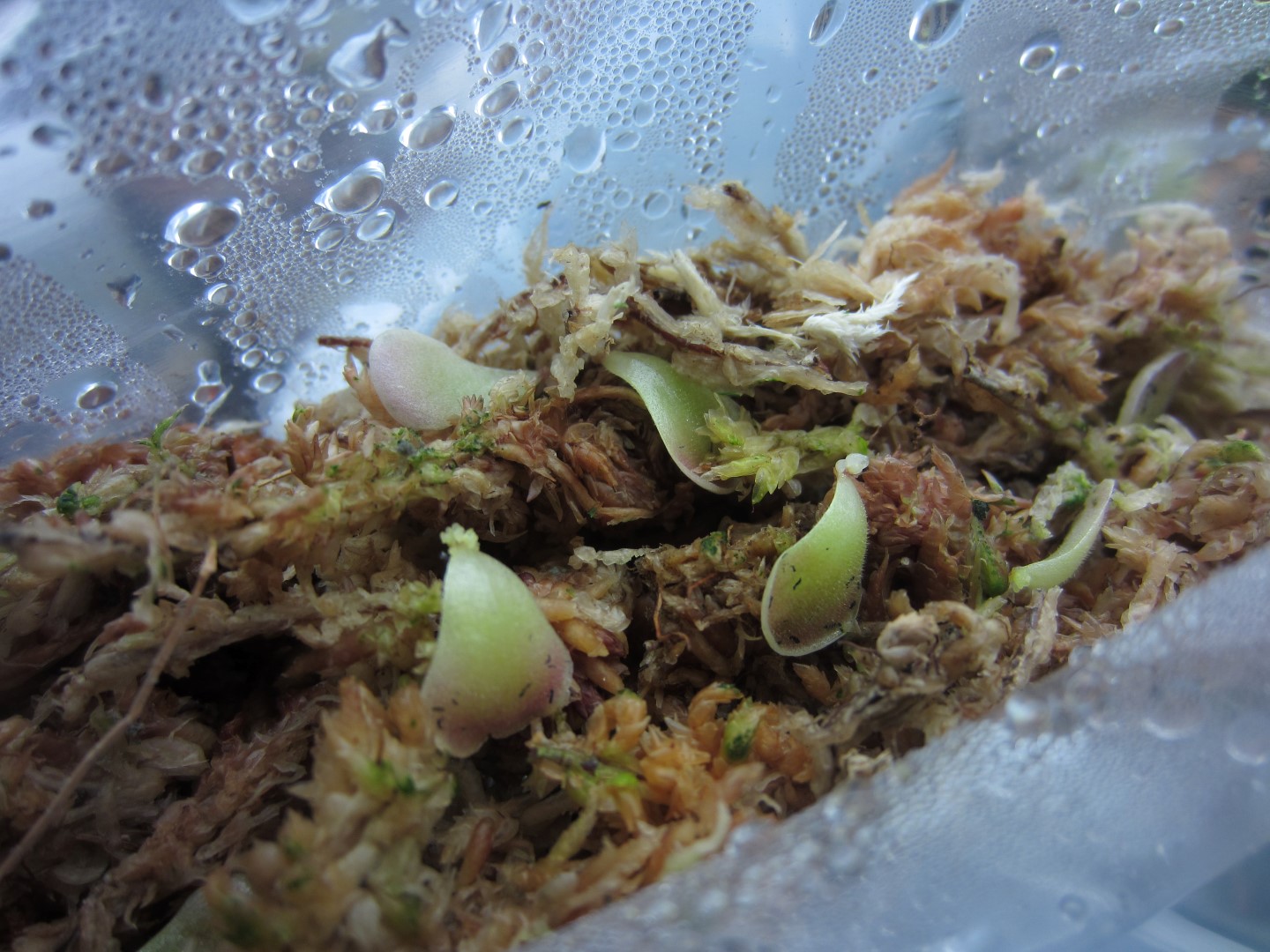 P. esseriana. I grew some plants from a leaf that fell off when I ordered my original esseriana. I sacrificed an entire one of those plants for pullings. 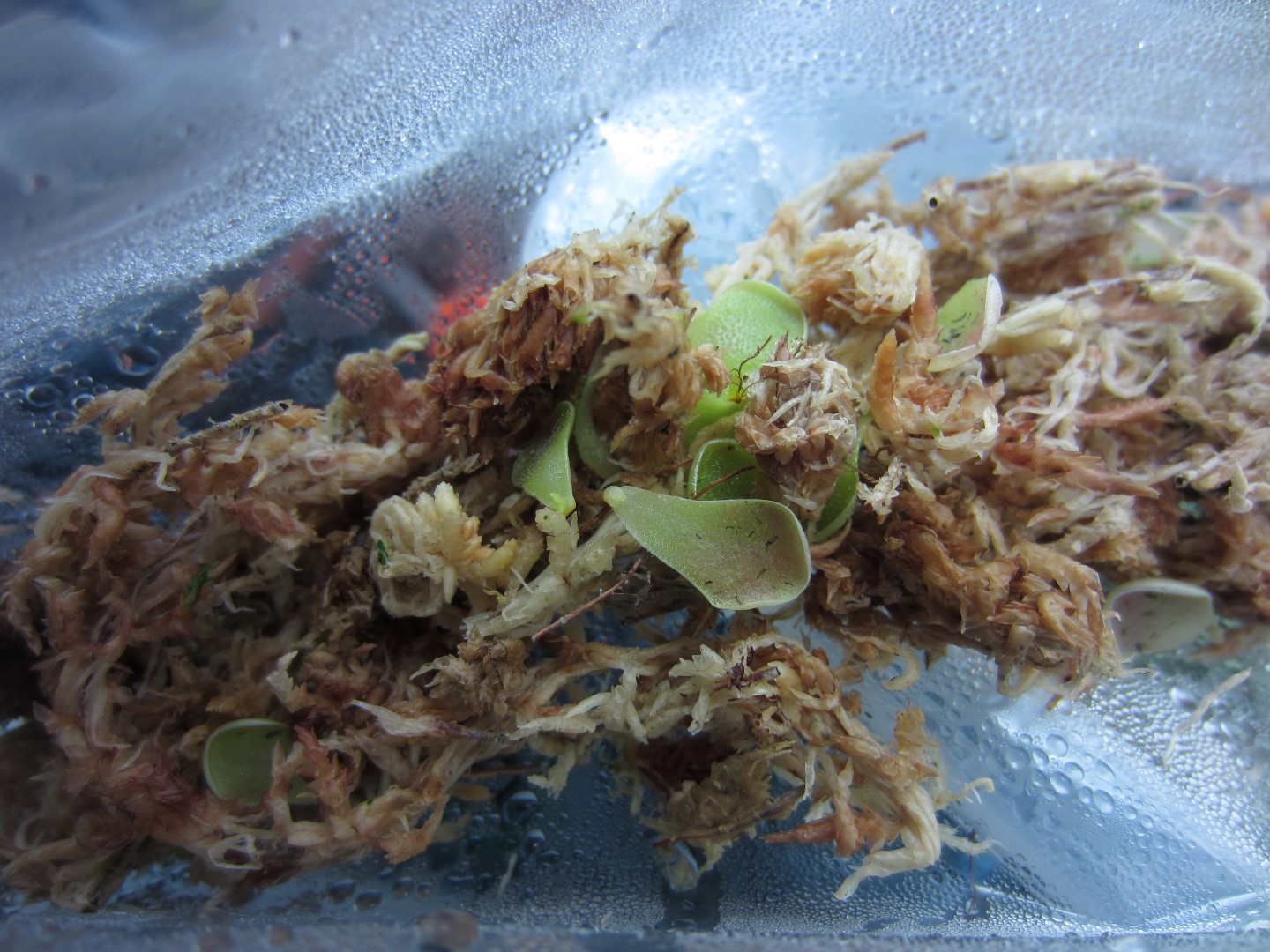 have you tried with the same method , but just with a wet blotting paper ?

For seeding this method on paper is also very advantageous