I wish i had a ride to go and could of afforded to skip out on work but it wouldn't be fun going their broke id prob have cried if i didn't take something home lol! Maybe next year.. i wanted to try and do something for kids and maybe give out free capensis to kids who'd like to take a 20min learning and exploration talk about caring for Carnivorous plants..but i didn't kno if i would of had to sign up to be able to do that soo i didn't have a good reason to drop everything and take a train/bus their...to bad looks like i really missed out

Without a control, this is speculative at best. Sure - coffee has nutritional components, but unless you have a control to measure the results against, there is nothing conclusive nor definitive to be had from this. Yes - its a great looking plant. But it might have ended up where it is today just as fast without coffee treatment, or even faster with a balanced fertilizer.

This discussion reminds me of the rabidly enthusiastic folks who swear that "Caffenol" (a home-made, coffee-based substitute for commercially formulated film developers) is superior to anything Kodak or Ilford (or any one of a dozen others) has engineered specifically for use with B&W film emulsions. In fact, the only thing "superior" about Caffenol is the fact that it has marginally less impact on the environment, but by no means does it produce a "superior" result as a film developer. People are inclined to arrive at certain, often preconceived, conclusions just because they want to believe the've found The Magic Wand for their situation. Believing something doesn't make it fact.

No offense intended, and this is not intended to be in any way dismissive of David's obvious skill as a grower.

Whimgrinder said:
Without a control, this is speculative at best. Sure - coffee has nutritional components, but unless you have a control to measure the results against, there is nothing conclusive nor definitive to be had from this.
Click to expand...

As I had mentioned a bit earlier in this thread, I am hoping to have a significant number of plants of a single clonal line -- some to pose as the experimental group and others to serve as the control, within a few months. I had an earlier opportunity in 2013 with a large batch of seed grown plants; but their inherent variability didn't prove to be suitable for an experiment . . .

have you ever fed coffee to just the pitchers and not the roots/substrate?

Flip_Side_the_Pint said:
have you ever fed coffee to just the pitchers and not the roots/substrate?
Click to expand...

I generally don't add anything to the pitchers, since they seem to be all too capable of catching insects on their own; and only fertilize through the compost. I know many growers who feed the pitchers to sometimes great effect; but I am not among them and had poor results, when that was done in the past . . .

In the last six to eight weeks weeks or so, I had been ramping up the coffee use, from bimonthly to every ten days, to see whether there was any noticeable effect; or whether I was simply smoking dope. In all of the plants of various ages so treated, each experienced almost a doubling of size with its latest leaves. In the fourth photo, both of those plants are of the same age and germinated within a day of one another -- an all too clear illustration of the variability of seed . . . 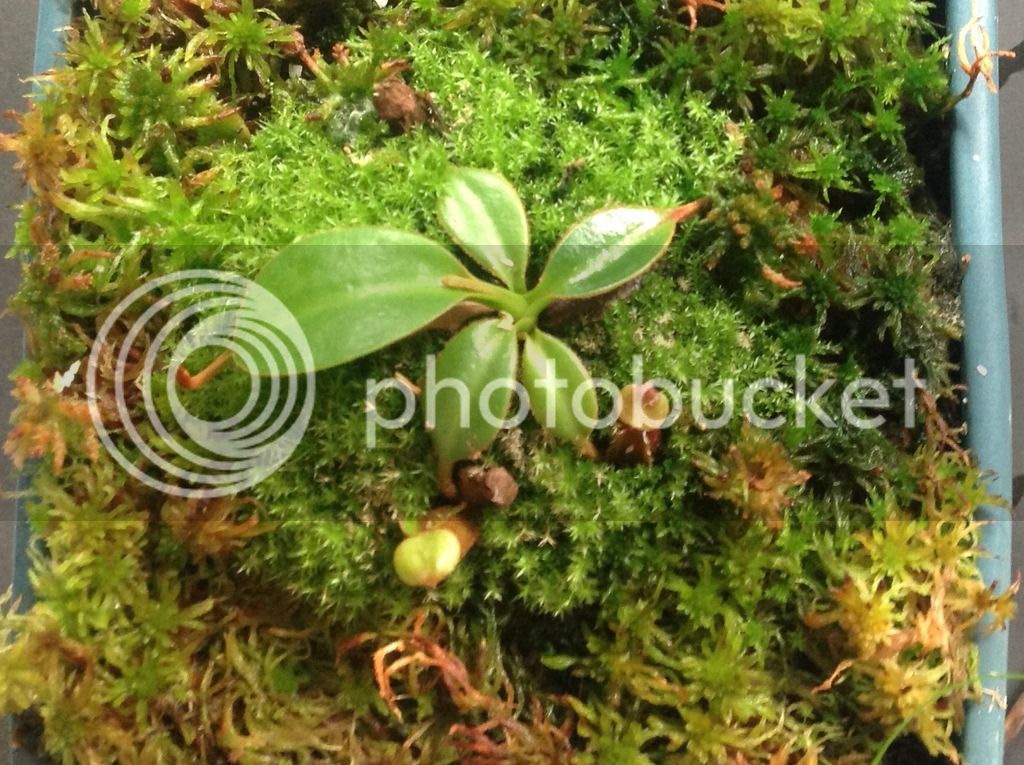 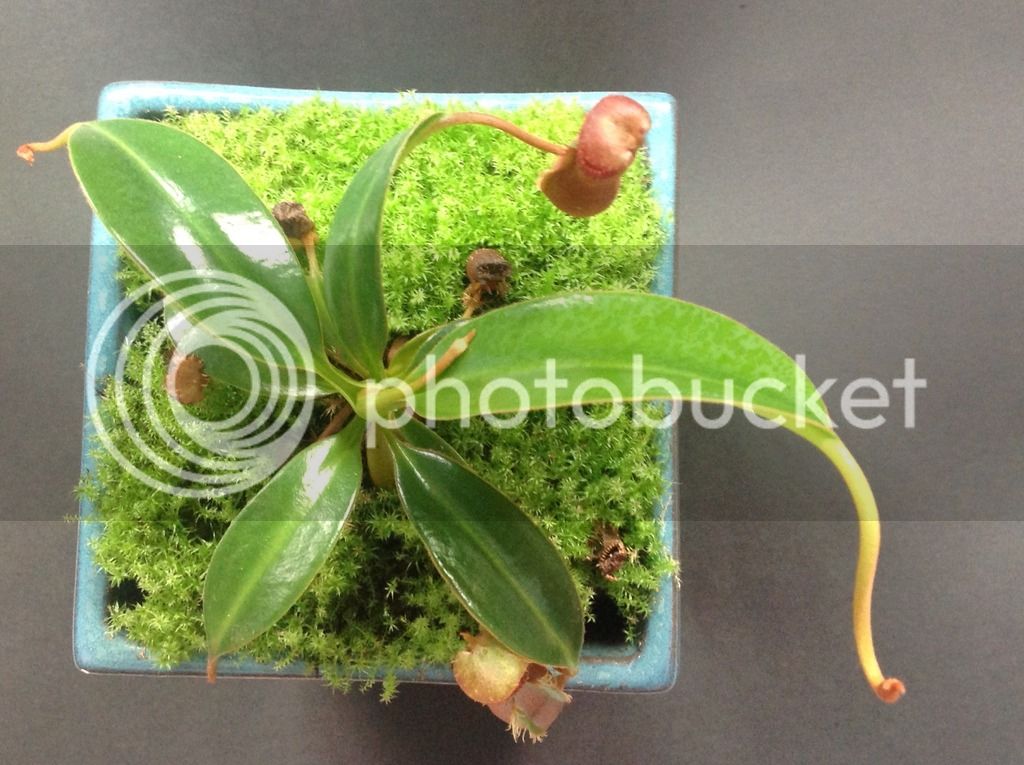 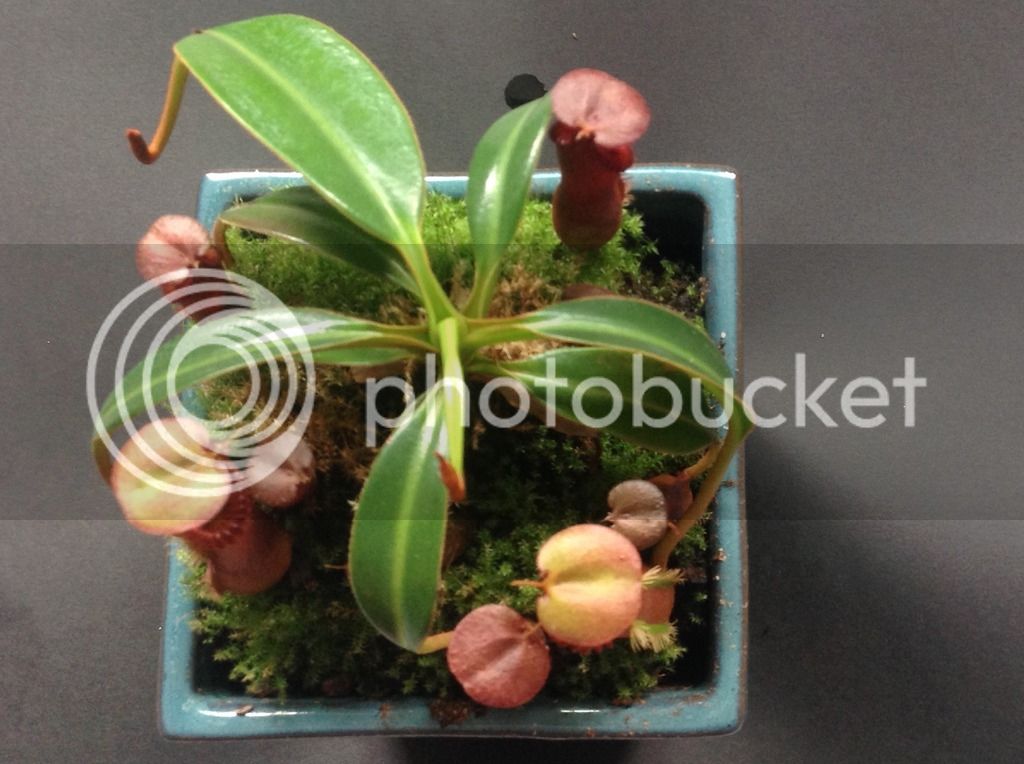 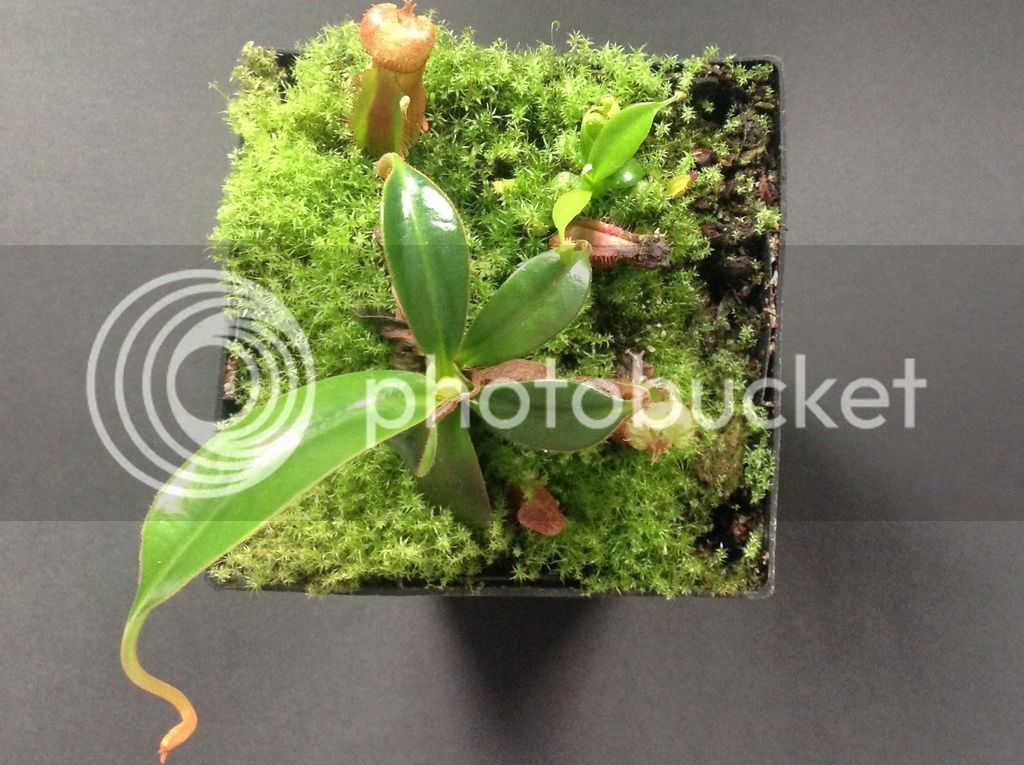 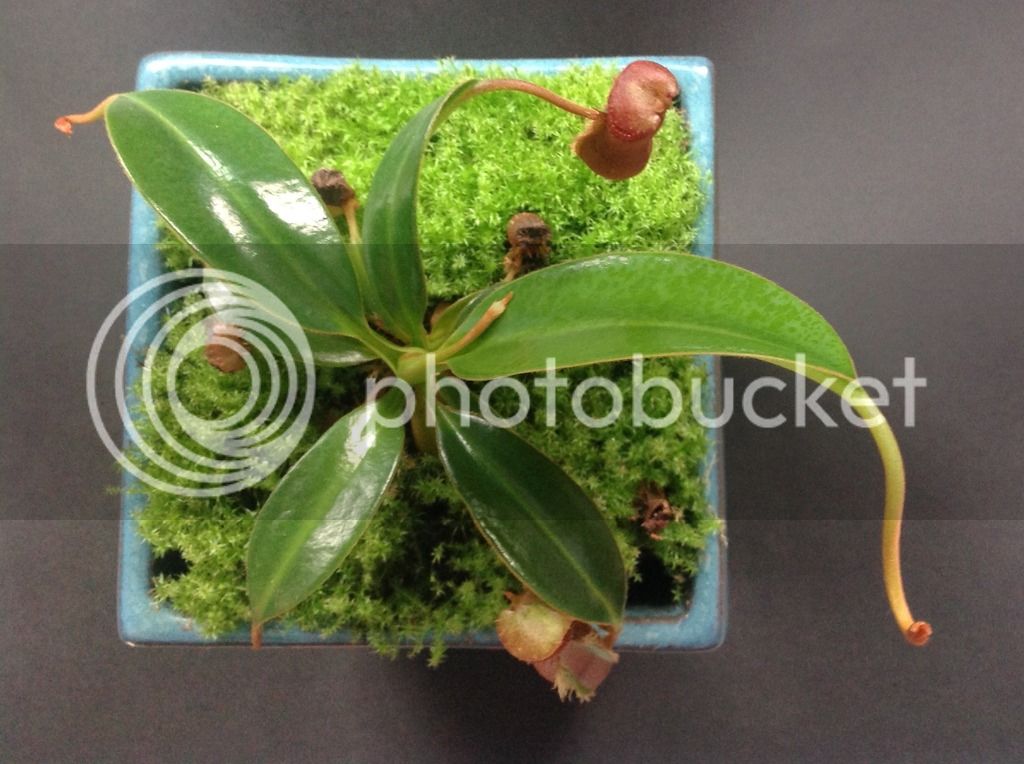 bigbella, this is said with the friendliest of intentions... I hate you
I havent been following this at all, but those are beautiful plants - and that has nothing to do with their names

look how thick the pitcher tendril is on the last eddie leaves. those will be much bigger pitchers too

Gorgeous plants. Really enjoy looking at your photos. The plants look great in those containers, with the soil slightly mounded and covered in the green moss; really makes it pop. I'm eager to see how your experiments turn out after you receive your clones.

Some of the moss is live/dead sphagnum moss. The other stuff (bright green, small, upright growth surrounding the stems of the plants in the most recent pictures) appear to me to resemble common hair cap moss. That stuff seems to just randomly pop up in the growing media from time to time. It is quite common and some folks hate it, but I find it pretty.

Wow... fantastic as always. Your pics never cease to amaze me, and they make me stare at them in a blinded daze BigB. Wonderful.

I got one question for you though.... with all these amazing plants...how the heck do you manage to fit them in your house? Is it a greenhouse the size of the temperate house at Kew? Or is it a whole house dedicated as a terrarium for these plants.

Varun, thanks for the kind words. Some of the younger plants are with me, chowing down on insects on a South-facing window; others, outside, shaded under an arbor; and some in a friend's cold-frame greenhouse, along with her highland orchids . . .

Here is some further progress, of a couple more experimental plants, also treated, as were the eddies. There are some earlier shots from mid-Summer (10-15 July); then others, from this afternoon. Both species have a bit of a reputation for being somewhat slow growers . . . 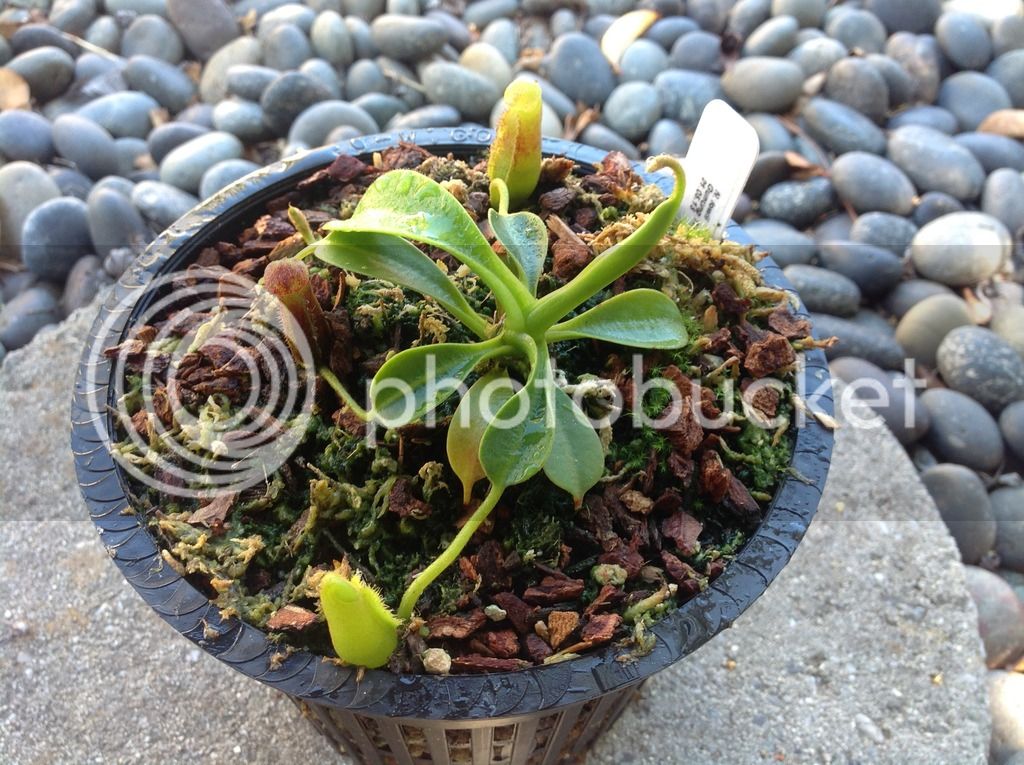 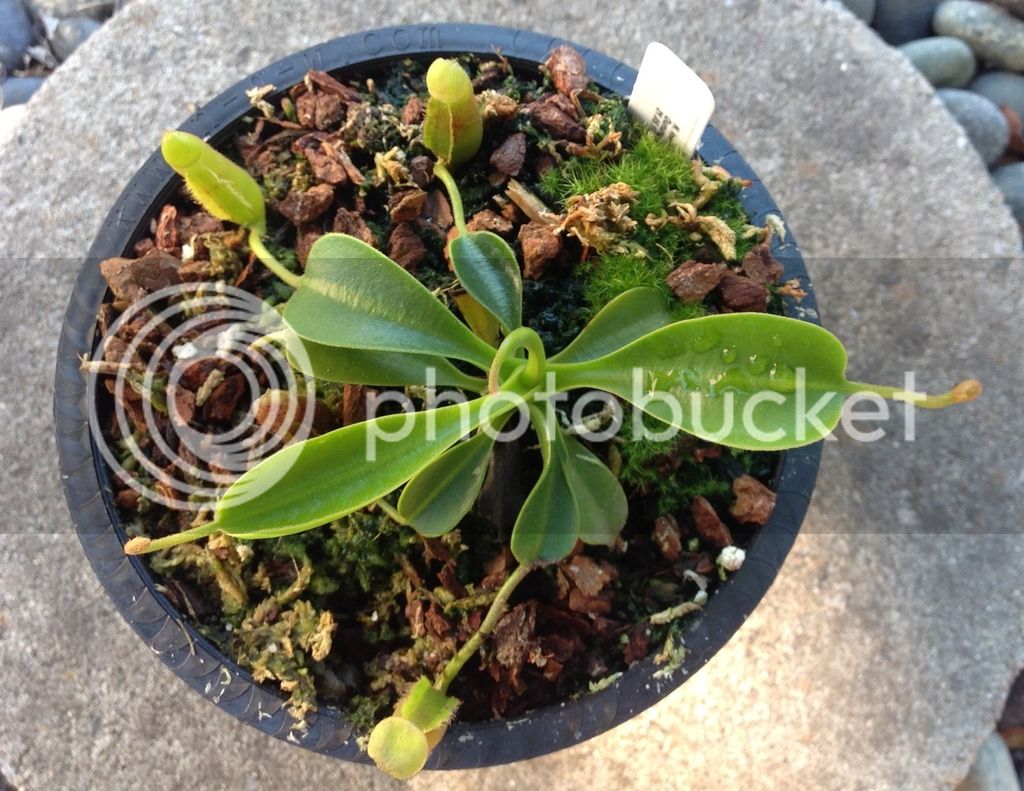 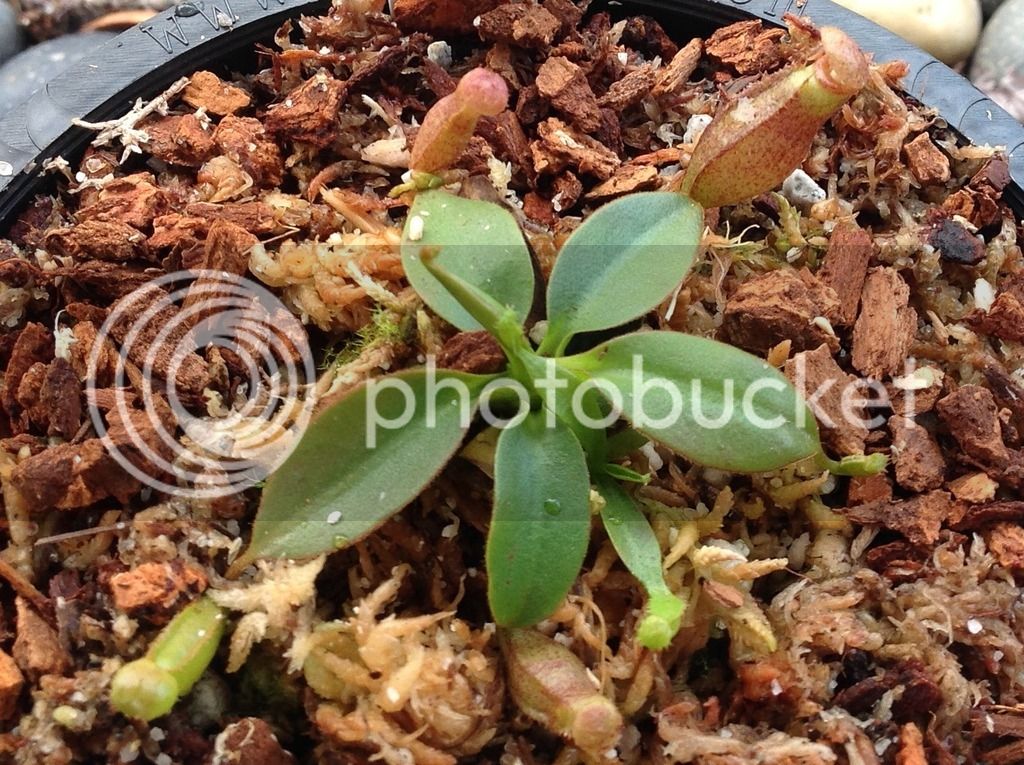 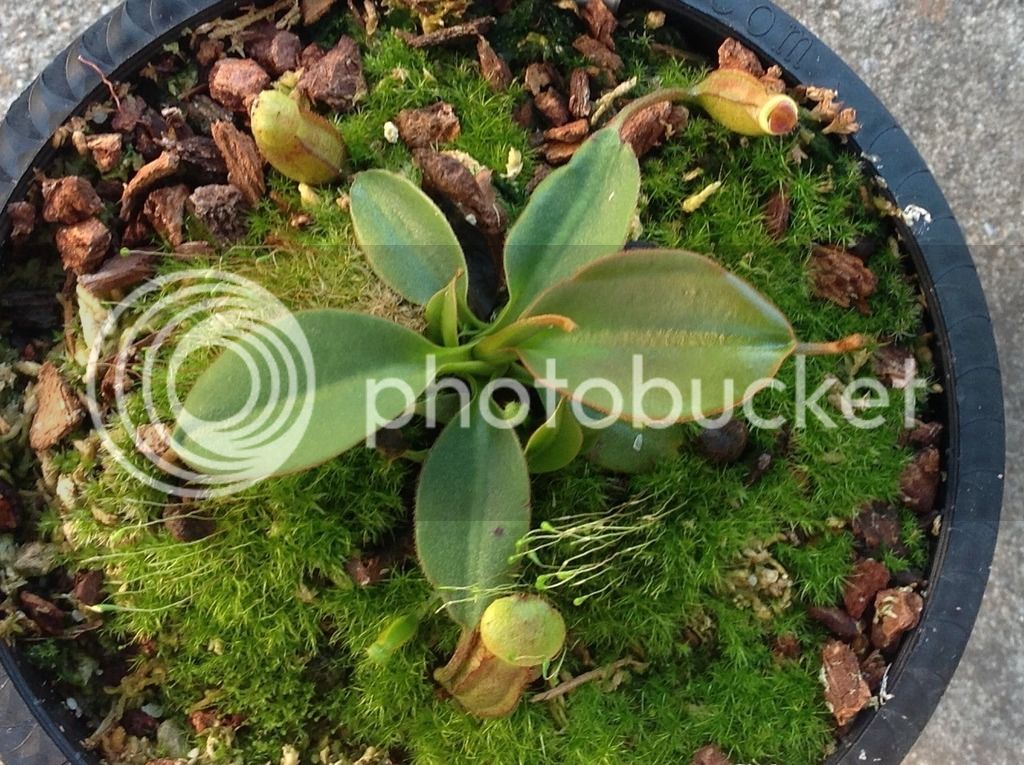 Here is an update of one of the many treated plants, on a recent California morning, in the mid-forties: 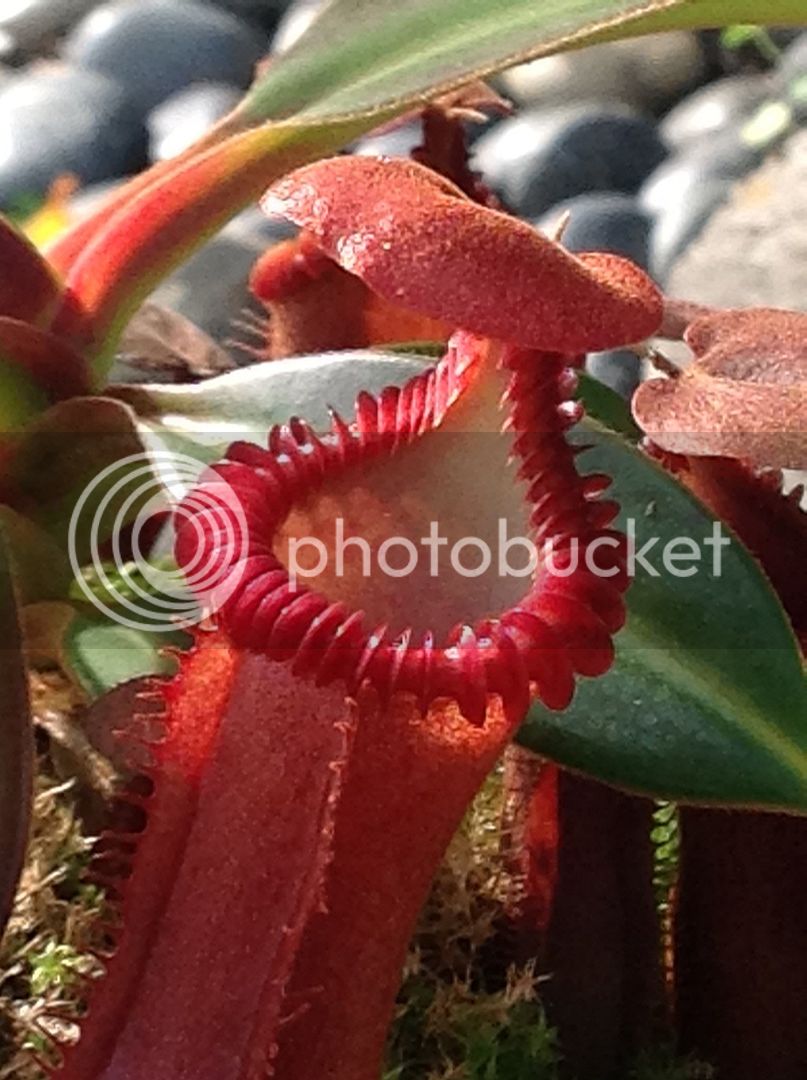 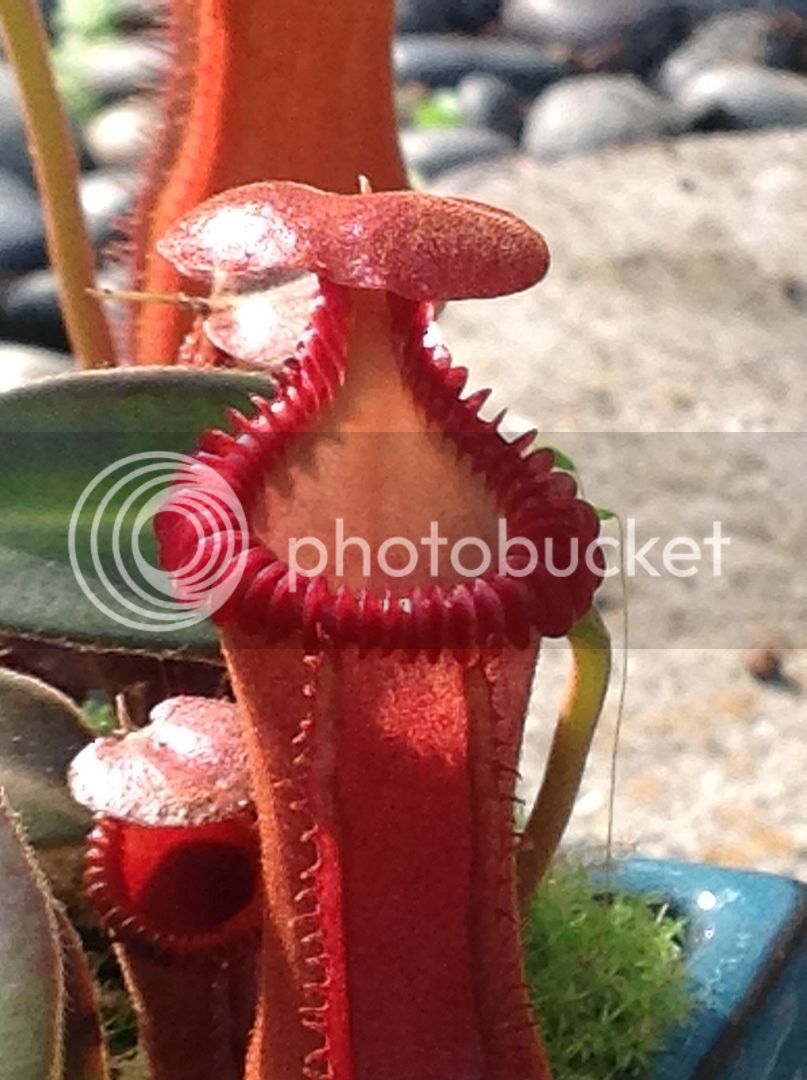 Damn!! Just incredible. BTW...thanks for replying to the earlier comment about ur GH setup. Its been a while since I checked TF.

Here is an update to one of the plants, which is just opening a new pitcher and is beginning to show off. The previous one, pictured last on 26 January, is to its immediate left . . . 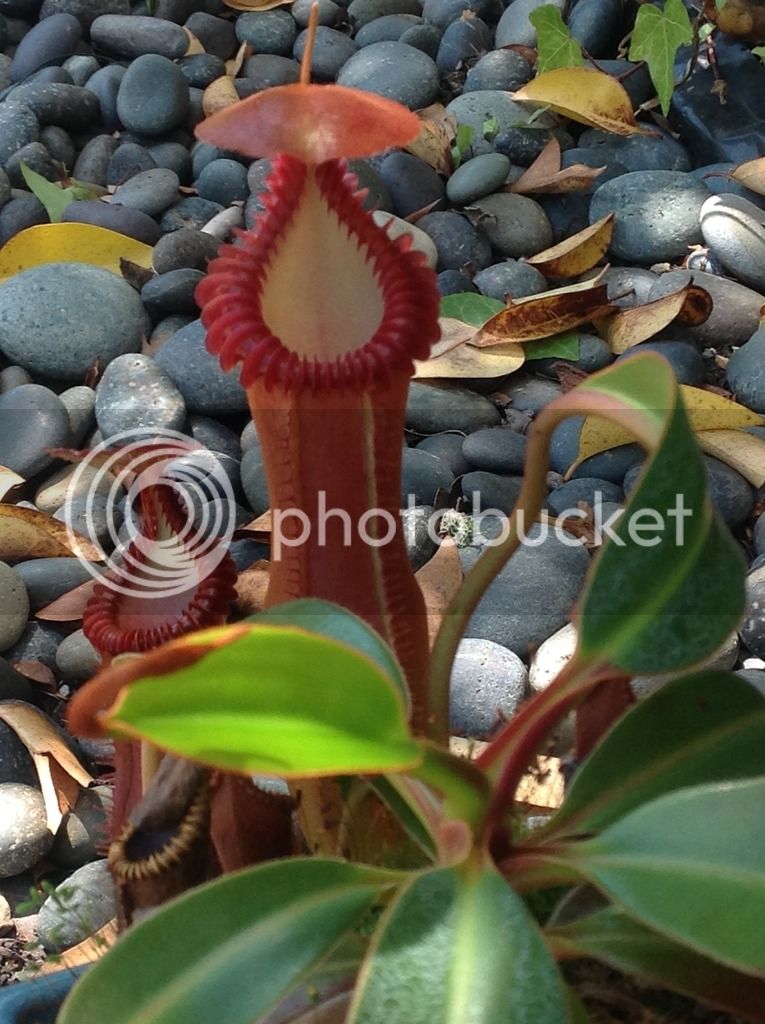 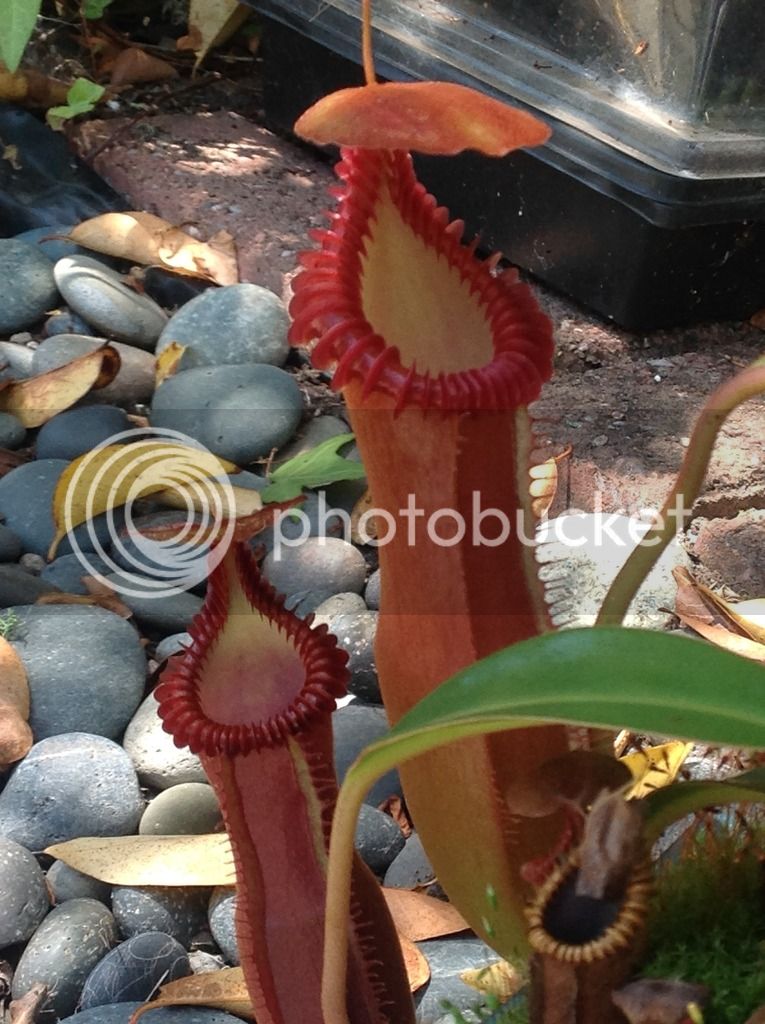 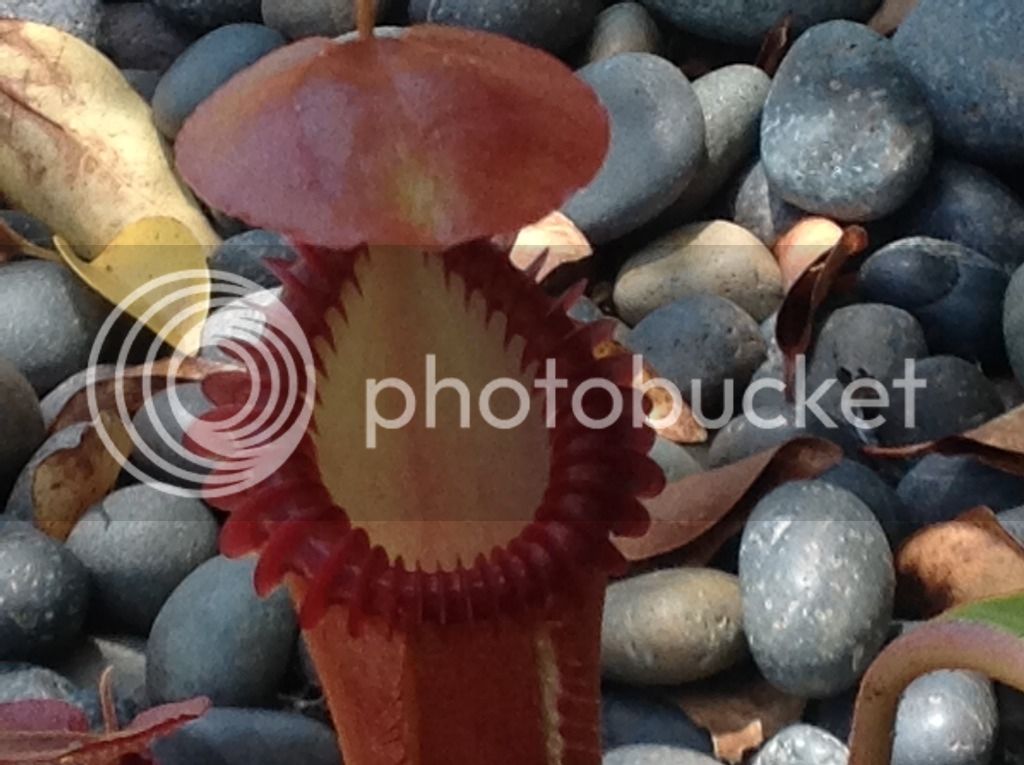 Amazing as always. Thanks to this post I am about to get off my lazy butt and drown my eddy in coffee hoping it will look like that in a few years.

wow. I don't think I have ever seen eddies with such a nice pitcher:leaf ratio. Is this from a windowsill? shade grown or greenhouse grown?

vraev said:
wow. I don't think I have ever seen eddies with such a nice pitcher:leaf ratio. Is this from a windowsill? shade grown or greenhouse grown?
Click to expand...

That plant is currently enjoying an insect-free South-facing window; in direct sun for a good portion of the day, along with a few other happy Nepenthes . . .
Last edited: Jun 14, 2016

What is this window you speak of?
Last edited: Jun 14, 2016
You must log in or register to reply here.