Time for plan B?

ever since I have gotten it, My spatulata has been very picky, and has not been looking very good.... well, ever really. It being my first plant, I was bound to make some mistakes, but I want to make sure I don't make one final one and end up finishing it off. What I'm trying to get to is this: should I wait a few weeks and see if it gets better (and risk passing the point of no return), or should I act immediately and make cuttings of the plant before it dies on me? Every time a young leaf bud comes up, the leaf browns and dies before it can unfurl from the stem. I've only gotten two leaves to open up since I have had it, and one has crippled itself and the other has mutated. I think I may be best to start over, and then I can at least have a few plantlets to work with instead of a plant that is on a downward spiral. Here it is. :-( 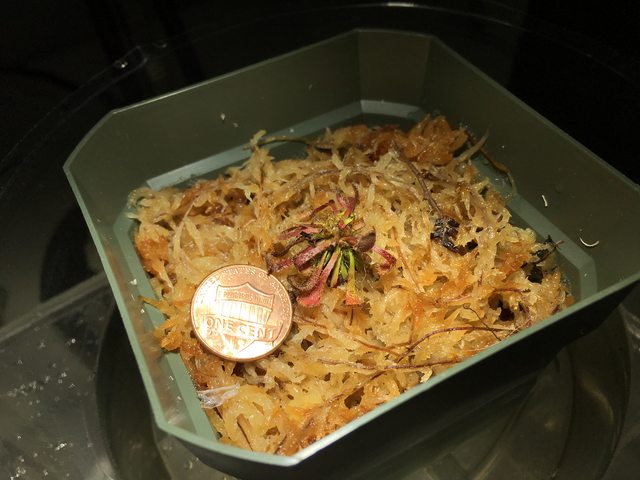 What conditions are you growing it in? If your conditions aren't appropriate for the plant, I don't think plantlets from cuttings would have a better chance of survival than your plant right now.

It is in finely chopped LFM and has a healthy amount of distilled water available. I let it use up the water, as the LFM holds a lot of moisture anyways- but have not let it dry up completely yet. It gets about 14-15 hours of artificial light a day, and is under a 12w 1020 lumen daylight LED. Ambient humidity is the only real factor, as it can go from around 50% to 20% (open windows/air conditioning). It was repotted somewhat recently, so that still could be a factor. I will try moving it into a higher humidity area soon. It had originally been in soil that was contaminated by fertilizers, so the roots were carefully rinsed.

picture was taker prior to rinsing. 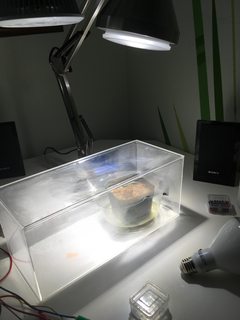 Your conditions seem to be appropriate for the plant and spatulata is a pretty resilient species so it should recover. You should keep a close eye on the center of the plant to check for new growth. If you don't see any I would take some leaf cuttings since that means the plant is a goner. Good luck with the plant!

Currently there is something I can only describe as a micro-rosette growing out of the center. It looks almost like it will cause a sort of reset and replace ALL of it's leaves, since the old ones are dying off. These older leaves were living, but had no tentacles due to the plant being buried during shipping. A few leaves were covering the center during this time and were likely also damaged. That would explain why every new leaf would bie before even opening. these damaged leaves finally perked up when I got my powerful LED lights on them, and turned a healthy red color before eventually dying.
I hypothesise that it only kept these damaged leaves as long as it did so it could photosynthesise until it had enough energy to replace them all. I really do hope that my hypothesis is correct. Here's the 'micro rosette' 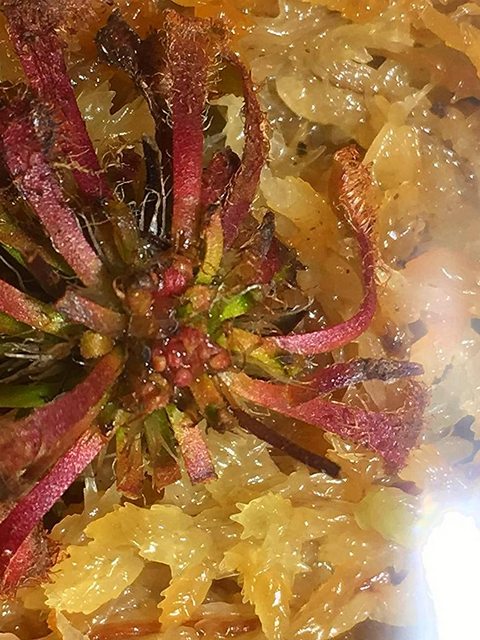 The center of the plant looks pretty healthy so I think it will recover. Your lighting must be pretty good it make the leaves so red, so it should look nice once new leaves appear.

Agreed. The problem previously is that the new leaves browned at the tip before opening, and then died before then. I hope this stops, as it needs some new leaves. I don't know why they keep browning! arg!
Last edited: Sep 2, 2017

Update: something happened... I'm not sure what. It has some tentacles at least, but the leaves are inverted! they're rolling open facing out instead of in. Weird. 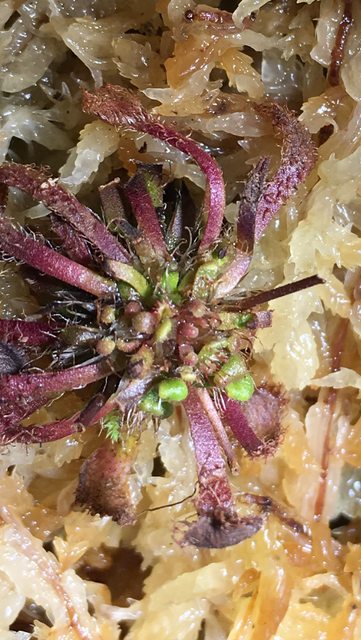 It looks like the plant is making multiple growth points. You see this happen with Nepenthes too, usually in response to stress.

Tanukimo said:
It looks like the plant is making multiple growth points. You see this happen with Nepenthes too, usually in response to stress.
Click to expand...

Yes, I think it has two growth points. I'm happy now that the leaves are not dying before opening, as I can feed it. It has not been fed since I received it due to no functioning tentacles on the plant. I tried placing microscopic pieces of bloodworm on the tentacles, which it took readily. That should help with the new growth. It seems that it is replacing all of its old growth.

The stress might have been caused by repotting it, but the lights are the same, so hopefully I'll get some non mutant leaves soon!

The new leaves are coming in nicely, and I noticed that I accidentally grew a leaf cutting! I must have left a trimmed off leaf in the old pot, because I saw one with a tiny spat on it!

Happy day! If I don't screw this up, I can have two spatulata. Yay! I probably will not post pics until I get time (busy week coming up), but those will come here soon. Capensis seedlings are looking good as well. 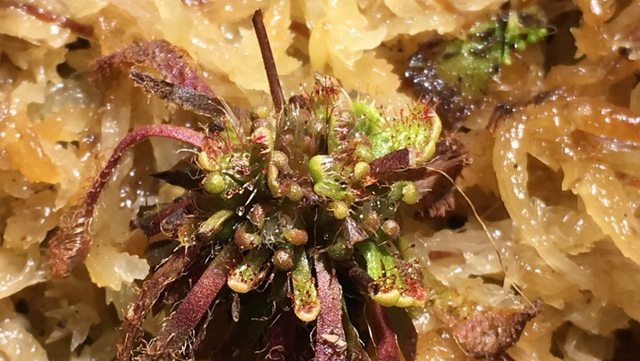 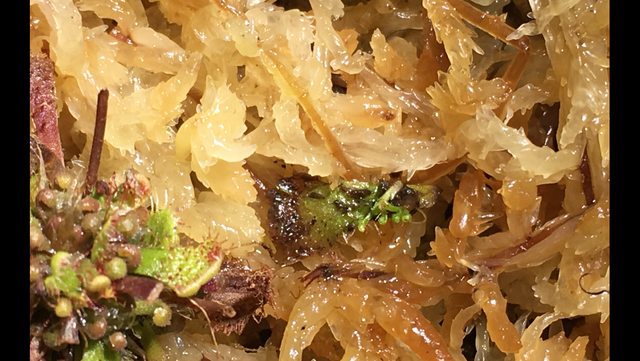 Out of curiosity, do you know if the leaf that sprouted in the old pot was one that looked like it was dying or one that was new?

Out of curiosity, do you know if the leaf that sprouted in the old pot was one that looked like it was dying or one that was new?
Click to expand...

It looked like it was dying, so I had cut it off (It looked like it does now actually, the same amount of brown even). It didn't even have any tentacles! I had kind of been hoping that this would happen too. as of now, spat #2 is forming and opening it's first carnivorous leaves. an interesting side note is how the plant is not growing out of the center of the plant like I have read that they usually do.

Well, I'm glad I won't have to watch the plant that got me into this hobby die, and now I have a shot at making a hybrid (VERY eventually). out of boredom, I had put a few capensis seeds in the pot with it, and they have started to grow as well. They're still dwarfed by even the little spat! I put a few on a cotton pad, to see how they root. The cotton pad would be an ideal material if I find it does not break down or anything, but that's a post for another time.

You're going to need healthy new leaves to be sure, but from what I can see of the old ones, your plant is tokaiensis, not spatulata

hcarlton said:
You're going to need healthy new leaves to be sure, but from what I can see of the old ones, your plant is tokaiensis, not spatulata
Click to expand...

It came marked as spatulata, but I can see how you could see tokaiensis. The older leaves are so deformed and mutated they probably should not be used for identification. All of the other leaves are new, but I'm going to wait at least a month or so for it to open up more leaves for Identification. Either plant has similar conditions. I'm just glad it didn't die on me.
You must log in or register to reply here.

Advice on bringing D. regia back from the roots