This is a thread for me to document my progress and observations regarding the behavior of Triantha occidentalis in cultivation. In case anyone is unfamiliar, Triantha is a small genus of mainly North American herbaceous perennials, though one of the four species is endemic to Japan. This genus has been known to science for many years, but has been discovered to be partially carnivorous only in the past year. This plant is a monocot, which puts it apart from all carnivorous/semi-carnivorous plants with the exception of the Bromeliads Brocchinia reducta, B. hechtioides, and Catopsis berteroniana. What makes it truly unique is that it is a flypaper carnivore, as opposed to the more simple pitfall carnivores like the Bromeliads.

This species is also unique in that only the flower stems are covered in the glands that secrete the mucous and enzymes. The rest of the plant looks like a typical, unassuming, grassy monocot plant that you wouldn't think twice of in the open wetlands where the genus lives.

There are two other species in North America besides T. occidentalis, but these haven't been confirmed to be carnivorous, though I suspect they are. These species are often found growing alongside other carnivorous plants such as Drosera and Sarracenia.

T. occidentalis, as its specific name suggests, is native to the western United States and Canada, from Northern California to southern Alaska. T. occidentalis is a common plant, often found growing alongside Drosera, Utricularia, Pinguicula, and even Darlingtonia in the southern part of its range.

The seeds I have are from an unspecified location in Washington state. I, like most other people I presume, have no idea how to grow these plants best. I can only start off by growing them like the plants that grow alongside them, such as Drosera rotundifolia or Darlingtonia californica, though I suspect they aren't nearly as picky as Darlingtonia.

These seeds went into cold stratification on September 14, 2021, and today on November 30, 2021, approximately a week after I removed them from approximately 10 weeks of stratification, I have noticed germination. Most of the seeds have germinated, so it would appear that 10 weeks is perfectly sufficient for a high germination rate.


Attached are a photo of one of the seeds that has germinated, and also a photo of the seed tray I currently have them in. I am trying them out in several different substrates to see which wins out: a peat based substrate with some fine aggregate, pure aggregate, or pure Sphagnum moss. The seed tray is currently on the second shelf of my greenhouse, just underneath my highland Nepenthes. Temperatures are 70-85f during the day and 55-60f at night. These should be optimal conditions, but I am going to be experimenting with different conditions once I have some established plants.

I look forward to updating this thread in the future with more images and observations of these little guys. Hopefully these don't prove to be difficult growers.

I've noticed germination after having taken mine out about 6 days ago. They'll probably behave much like Xyris or wetland Iris species.
F

Great guys. I look forward to whatever more you learn and can tell us.

The seedlings are growing their first true leaves now. Not much to mention apart from that I noticed very high mortality on peat/vermiculite and low losses on pure Sphagnum. Pure vermiculite was interestingly roughly in between the two with regards to mortality. I feel like there are a number of reasons this could be, mostly down to cultivation errors by myself. I wouldn't write off any germination media based off of my experience alone.

The seedlings are getting to the point now where I think they won't suffer many more losses, and I still have a good number of them. Hopefully I can get at least four or five of them to maturity.

Attached are a couple of macro shots of two of the seedlings showing the seed case, the cotyledon, and the first true leaves. Also included is a shot of the whole tray in its new location on the top shelf among highland Nepenthes. Ignore the Sarracenia seedling in the nearest cell on the far right, it was becoming overgrown with moss in its pot and I had to plant it somewhere.

Hopefully the next update will be of larger seedlings. These don't seem to be the fastest growing plants, so hopefully it won't be too long, but I won't update until there's something to report.

My progress thus far (though really, this being an old photo now, most of the pot is green): 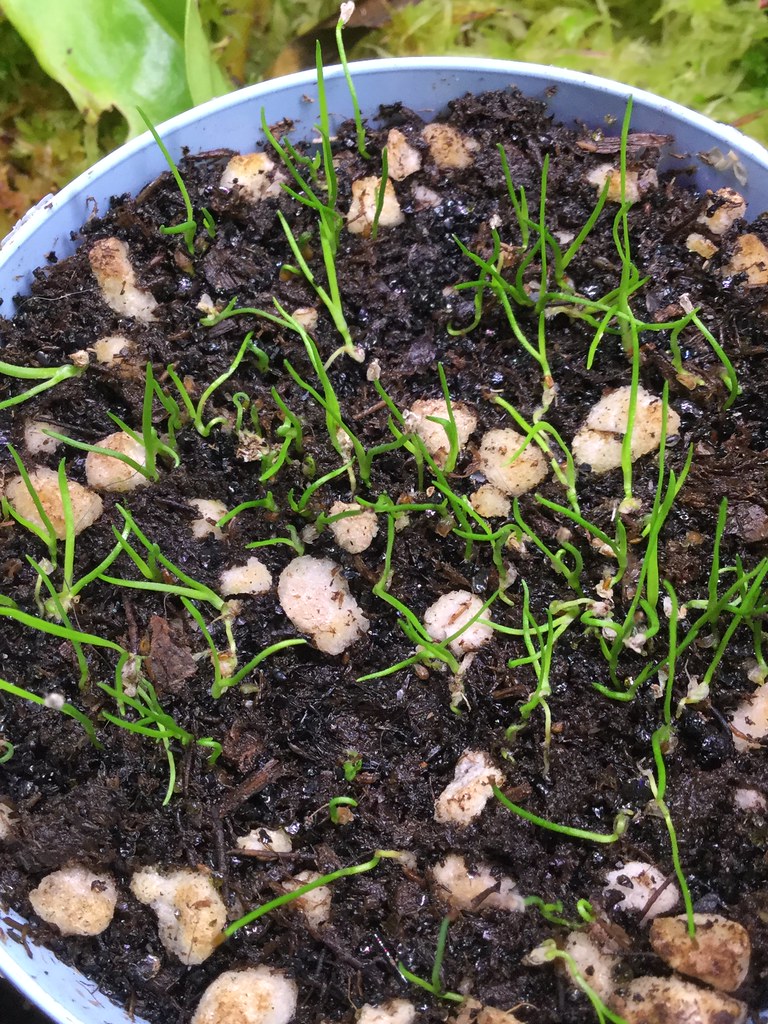 I had initially planned to test stratification lengths of 4, 6, and 8 weeks but ended up not having enough space and had to sow them all in the same pot. Regardless, they seemed to be germinating well even after the minimal 4 weeks, starting to germinate in a week like you two have already reported. I did lose a few seedlings to fungus after germination (likely because my current bale of peat seems to have a ton of fungal spores in it) but most are growing fine. I also scattered some seeds in a tray of live Sphagnum moss outdoors and will be curious to see if any of those grow, particularly after several rather lengthy freezes. A pic from a couple weeks ago: 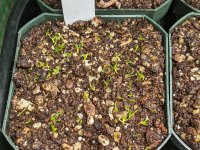 I've noticed that these guys grow very slowly, much more slowly than I anticipated. Nevertheless, most of them have a few real leaves now and I don't think I'll be seeing many more losses. 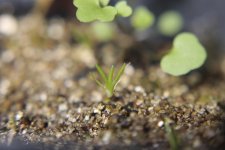 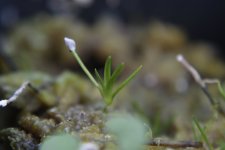 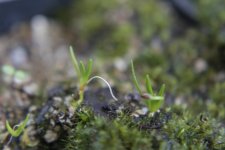 LFS seems to be the clear winner of the germination media, with far more surviving plants than vermiculite or peat/vermiculite.

Not much else to report on these guys for now. I'm interested to see if they grow faster now that the days are getting longer and temperatures are increasing. They've been getting standard highland conditions, 65-85 (occasionally higher) during the day, and 55-57 most of the time at night.
Last edited: Mar 13, 2022

Yes they have been very slow for me as well. I've been wondering if some fertilization is in order but I'm not sure what to try. Have you guys attempted anything?

nimbulan said:
Yes they have been very slow for me as well. I've been wondering if some fertilization is in order but I'm not sure what to try. Have you guys attempted anything?
Click to expand...

I've only got a few, I'm not experimenting with them any more than I have to. Maybe someone else can give it a try? My assumption is that they'd benefit from fertilizer as much as Sarracenia or Darlingtonia would. That is, it'll kill them unless you're really careful. Though they're not full time carnivores, so maybe it's worth a shot.

I've been dripping occasional Maxsea on the ones I have; not a one has died, or even seemed to flinch, and probably subjective without direct comparison, they seem to maybe be a little larger than those? Tallest ones are about an inch currently.

hcarlton said:
I've been dripping occasional Maxsea on the ones I have; not a one has died, or even seemed to flinch, and probably subjective without direct comparison, they seem to maybe be a little larger than those? Tallest ones are about an inch currently.
Click to expand...

Mine are maybe a half inch to 3/4 of an inch at most. Maybe fertilizer wouldn't be a bad idea.

Of course, the size discrepancy could be any number of things. Growing conditions, genetics, etc. Mine are from an entirely separate population than most people's after all. I think I might try giving them a light misting with light orchid fertilizer every once in a while and see what happens if they don't seem to be too bothered by fertilizer.

I'm not sure any of mine are larger than 1/8" yet, after nearly 4 months. Clearly they need some food.

Taken half a month ago, the current progress of my batch of seedlings: 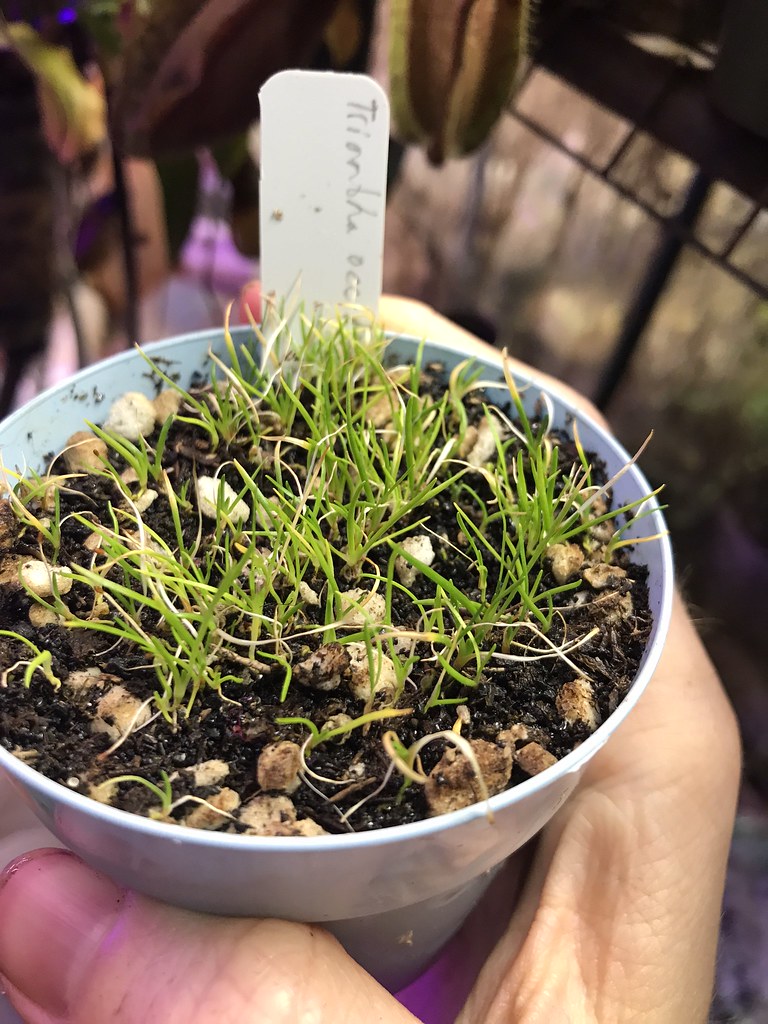 Just a quick update, I transplanted my two biggest ones into their own pots as a way to have some backups in case something happened to the main tray. A chipmunk has decided to live in the greenhouse and had been messing with them. As I was transplanting them, I noticed that they had a very large root system for their size. I wouldn't be surprised if that's where most of the growth is happening. Unfortunately I don't have any pictures of the root system.

One of the seedlings that I repotted has stayed about the same size as the others. The other, however, has exploded in growth. It's now almost 1.5 inches tall, about three times the size of any of the others. The next leaf looks like it'll be much bigger, and it's not growing at a snail's pace anymore. 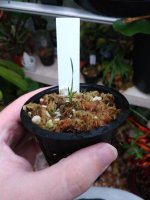 I've also fed them a couple of times with orchid fertilizer spray and they really seem to have enjoyed it.

Not quite current state (they've grown a bit since this), but they've definitely taken off: 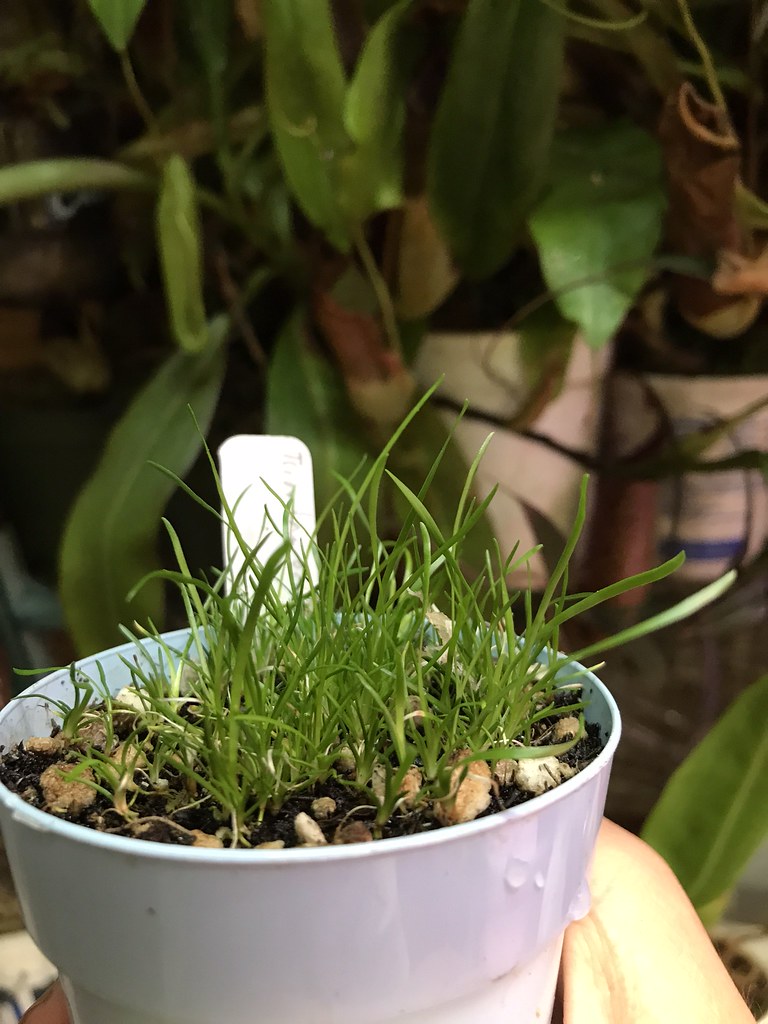 A video summarizing my observations after growing these guys for about 8-9 months. They're still doing great, they're just slow growers that seem to want highland conditions.

G
Give Away Free Drosera Capensis seeds and ceph leaf(s)!