I have 3 no-name Sarracenias (hybrids). Could you please help me with identification? Thank you in advance! 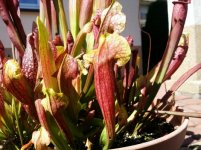 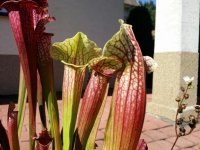 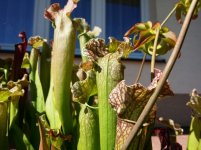 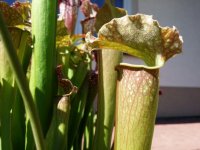 Unless it's a plant that perfectly matches the appearance of a known cultivar, they're just that: unidentified hybrids. There are too many crosses out there to make any positive ID without being able to trace the origin or make a cultivar match. the first has flava and purpurea involved, but could also have alata, rubra, etc. Second involves at leas leucophylla and purpurea, but looks like at least a backcross or could be something far more complicated. The third, similarly, has at least leucophylla, purpurea, something either alata or of the rubra complex, but beyond that is unknown.

But can we say that, for example, the third one is some kind of Sarracenia farnhamii hybrid? Or is the influence of many different S. species too strong?

If there is no label and there is no provenance it should not then be labelled as a known cultivar no matter if it looks similar. By all means say it is a hybrid with the look of a particular species, or even two, in its parentage but if you want names then how about
1) Daphne
2) Gertrude
3) Josephine

Then they cease to be noids

Daphne and Josephine... That sounds nice! But I don't really like the name "Gertrude". Can we call it Yvonne?

And guys - thank you for your answers.

so as the others have noted, yeah, it's pretty much impossible to say exactly what's in those crosses... for certain, that is. The art of speculation, however, should not be discounted. Although no substitute for a written pedigree, speculation is a skill that can help if you rationally think you can figure out parentages. Sometimes at the nursery I work at, I've been able to deduce a simple, 2 species cross from looking at the characteristics visible (given that the cross was known to include only 2 species, and that it could be backed up with the nursery owner's memory). But again, one's guess is only as good as one's informed experience and rationale. Other factors to take into account besides pitcher shape or color is growth habit, including if the plant produces seasonal traps or phyllodia, and flower color, scent, morphology, and the time of season when it flowers. Responsiveness to seasonal cues is another hint to ancestry. Even the texture of the pitcher's tissue can offer clues to parentage.

Another trick to really discovering pedigree is to do multiple self-pollinations and see what genetic diversity is unlocked in the offspring. When Adrian Slack is selfed, because it's a S. x moorei, plants resembling flava, leucophylla, and intermediaries are present in the progeny. Another fun case of this was when Jerry Addington selfed a supposed S. rosea and got a plant out of the progeny with a white, frilly lid like S. leucophylla. Whether or not the pollination was botched isn't necessary to illustrate that Sarrs contain incredibly diverse genetics, even in specimens assumed to be pure species.

The first hybrid looks like a catesbaei, but probably all three are complex hybrids. I hadn't heard of farnhamii before!

The first one has probably a bit more than just purpurea and flava going on in it, complex hybrid. And S. x farnhamii is the proper name for the hybrid S. leucophylla x rubra (ssp. farnhamii for x ssp. rubra, ssp. bellii for x ssp. gulfensis), a cross that has been improperly renamed such things as "stevensii" and improperly ascribed under S. x readei (which is alabamensis wherryi x leucophylla).
You must log in or register to reply here.

L
For Sale Large collection of plants for sale!