So today I did something really stupid. I accidentally broke the pitcher off from the tendril.

I wanted to move the neps around my balcony so that they get more sunlight, and as i was moving them around, this raff got stuck on something. I thought maybe the pot was stuck on something, so I pulled harder, and it was actually stuck on another pitcher on my lowii x campanulata (what I find funny was that I accidentally snapped the tendril of this plant before, but the pitcher didn't fall out). Thankfully, the lowii x campy wan't hurt, but the pitcher of the raff broke. So I tried to tape the pitcher back on like this 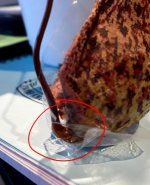 If the tendril breaks the pitcher isn't going to stick around. It looks like it's on the way out anyway.
You must log in or register to reply here.

I
Nepenthes madagascariensis not growing/ pitchering