Just moved all my plants to a new set up by necessity. I am having trouble with plants I never have before. Set up is wire shelf, covered with panda film on four sides, lit by four 2ft t5 bulbs. Plants are in 100% turface watered by tray. Temps are in the mid to high eighties during the day, low 70s at night.
Sprayed with 100ppm urea free orchid fert once weekly. 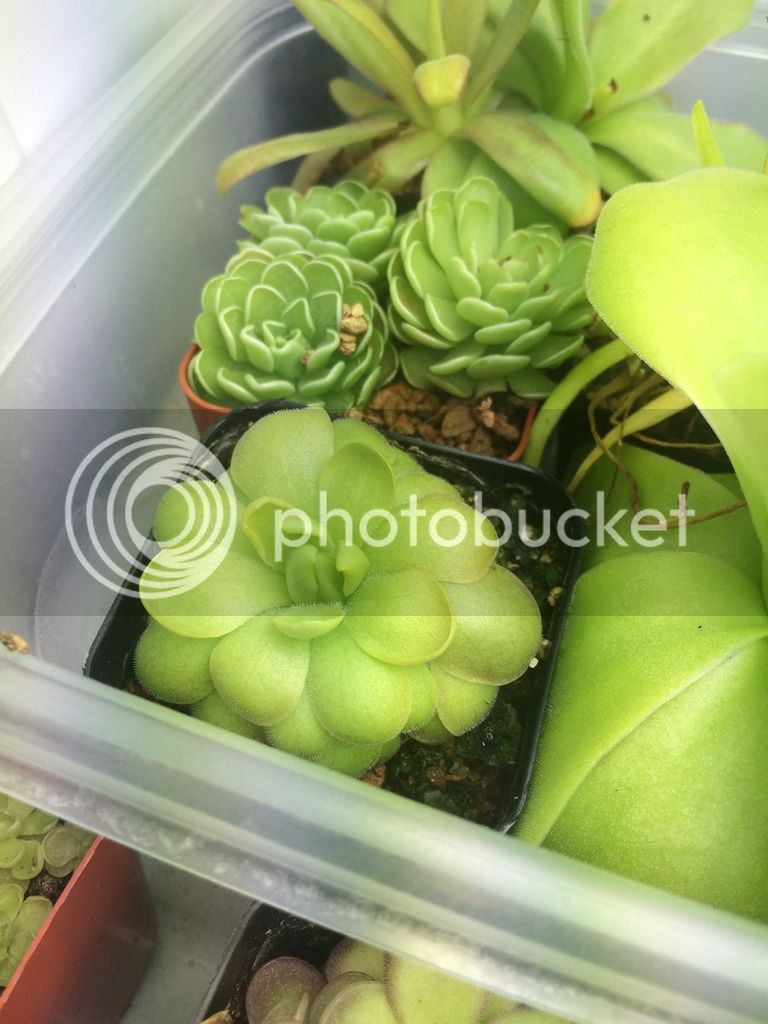 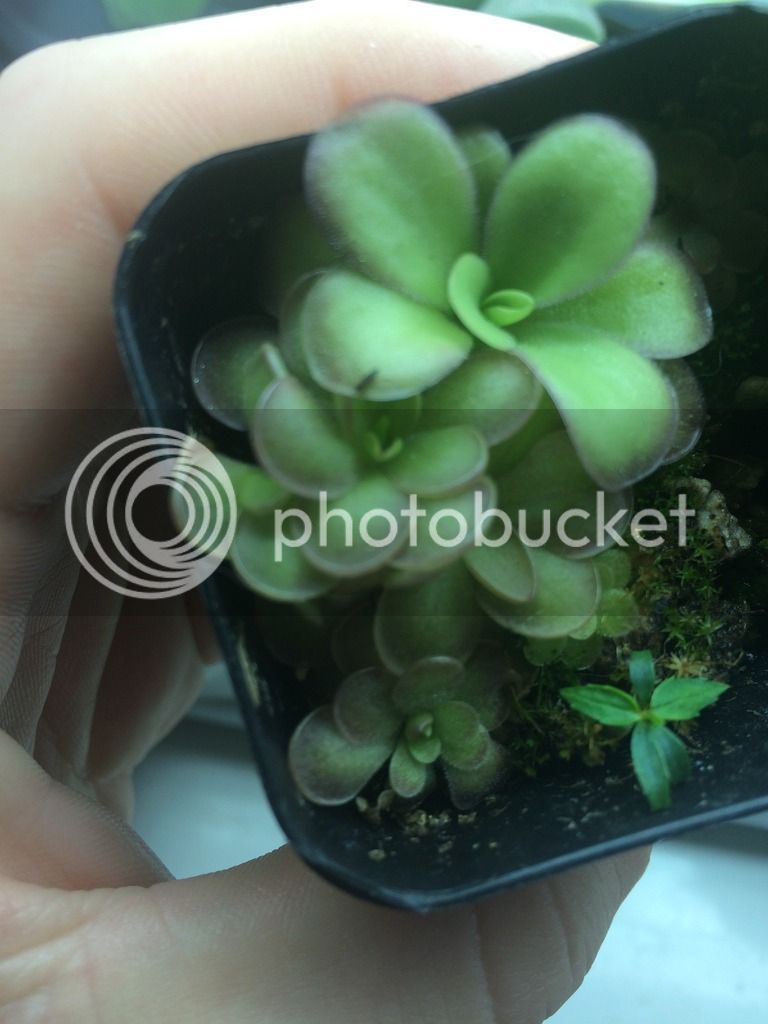 Largest one is something else, lower left three are p. laueana.

Pinguicula agnata (x moranensis?)
The tip of the leaf appears to have died. The lower portion of the leaf looks good, so do the roots. I think it has continued to grow, but is hindered by the dead tissue which is very hard. 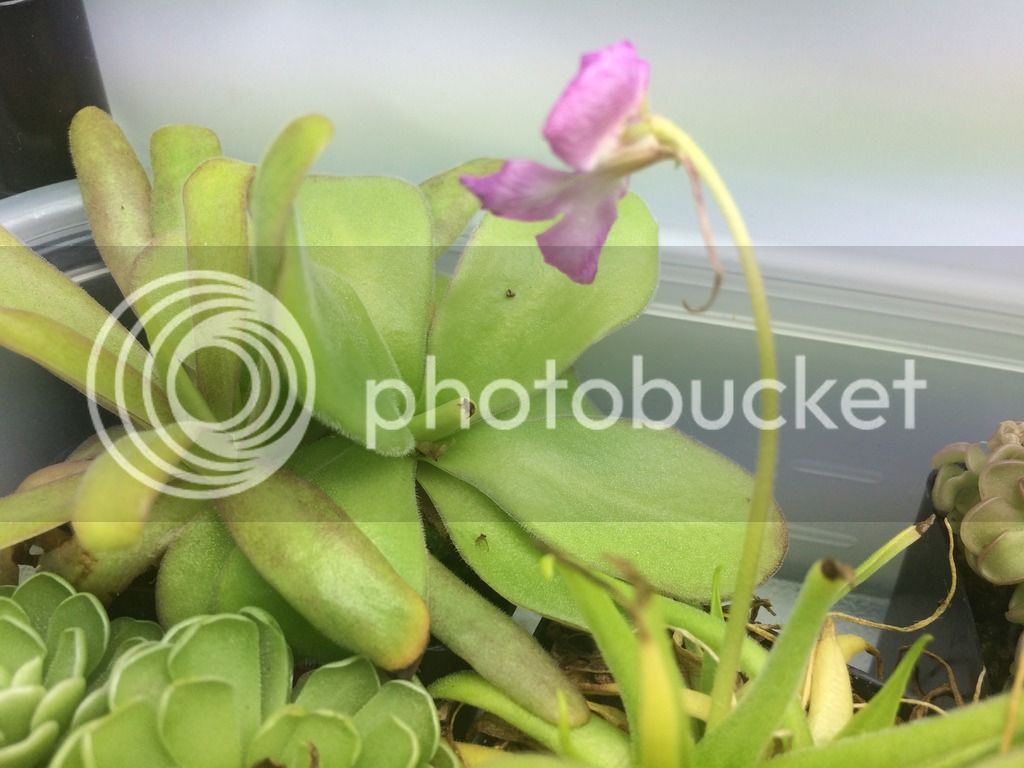 Pinguicula esseriana
Immediately thought BHD, but the dead leaves appear to surround a green growth tip, and the roots look good. A pot mate did get BHD several months back. So maybe that's it. 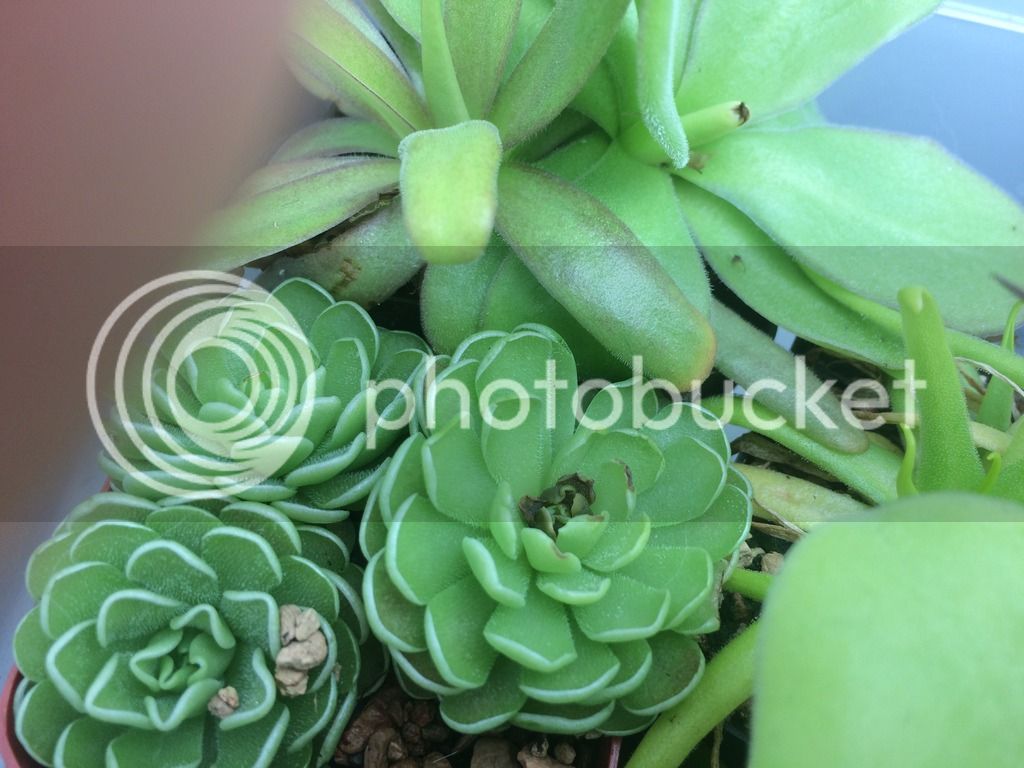 Hello! Did you acclimate them to the new lights?
I'm not an expert in fertilizing, I'm an all natural kind of weird guy. But why you do that? Have you do it before? In orchids exess of fertilizer burns the leaves and flowers.
There's stones in the pinguicula leaves, this might not be the reason for any of your questions, but, please remove them carefully, I mean I bet many could say it doesn't affect it, but like wouldn't it be better if was free of weight over the leaves?

So by now I'll guess that is, I have also never grow them on a tray I just top water everything, but I have seen wonderful results with the tray watering, so no need to change that, just commenting.

I forgot to ask, sorry for double post, what is the humidity?

I didn't acclimatize them to the lights, but I believe it's slightly dimmer than the situation they were in.
I have fertilized like this for a little over a year. IME Mexican pinguicula greatly benefit from frequent light fertilization. I notice them slow down if I don't do it for a while. They don't catch any insects in my set up.
I dont track the humidity, honestly I have no idea. I imagine it's relatively low.

I think it was the fan + heat wave that did it. I turned the fan backwards ( exhaust fan now) and I think it will help. It seems to have a little already.
W

Glad to hear they are doing better now that the fan is that way.
I hope everything works alright!

for me beginning of necrosis on a esseriana , removed the plant from the pot and make cuttings with healthy leaves .

you have no possibility to put them outdoor , now ?

no fertilizer for ping, insects enough, or if not, used sparingly flakes for aquarium fish, not too (just once a month).

In the second photo, what is the invader seedling (position roughly 4 o'clock)?

It turned out not to be crown rot. Healthy growth emerged from the black leaves, it's growing fine now. Everything has, actually, since I removed the fan from my set up.

Dragonseye: I have no idea. It just popped up one day.

Thanks for your advice everybody!
You must log in or register to reply here.

My UHL Setup (In Progress)
2