The original seeds of KSV I grow were taken under the license that Allen-san got from the government. Government permission is required to collect any materials from the wild in Australia (at least Western Australia).

This type specimen was collected so long ago that it can't be helped that it doesn't exist in Australia, but nowadays there is a nation called Australia and there are many researchers there. I find it quite inconvenient to have no type specimens in Australia when Australian researchers study the plants of their country. I think the government is trying to avoid such a situation. This is just my speculation. It does not reflect the opinions of the Australian Government.

I believe there are countless "undescribed species / subspecies" in Australia. 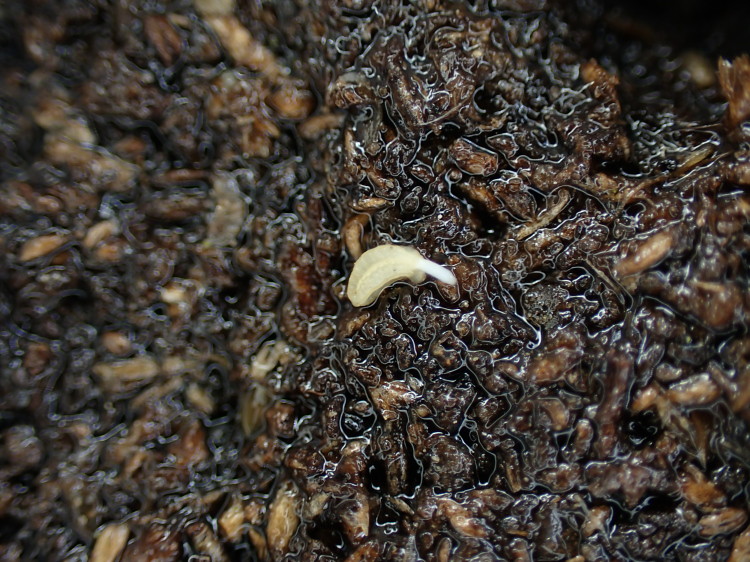 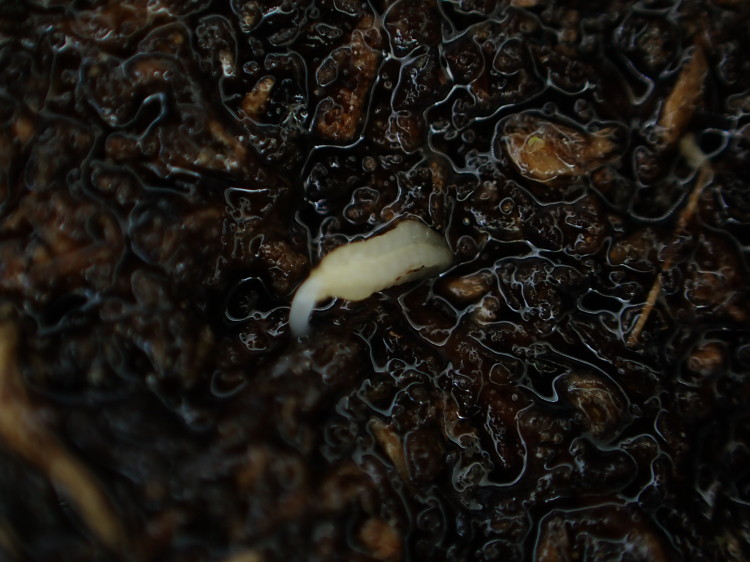 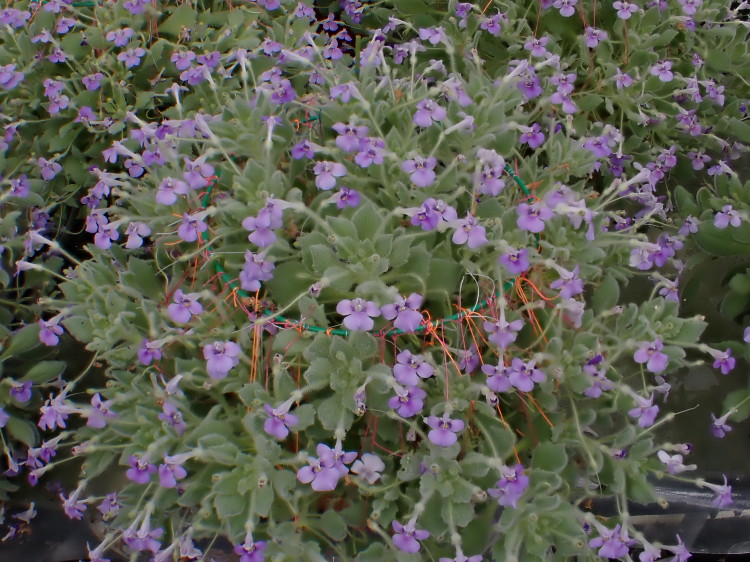 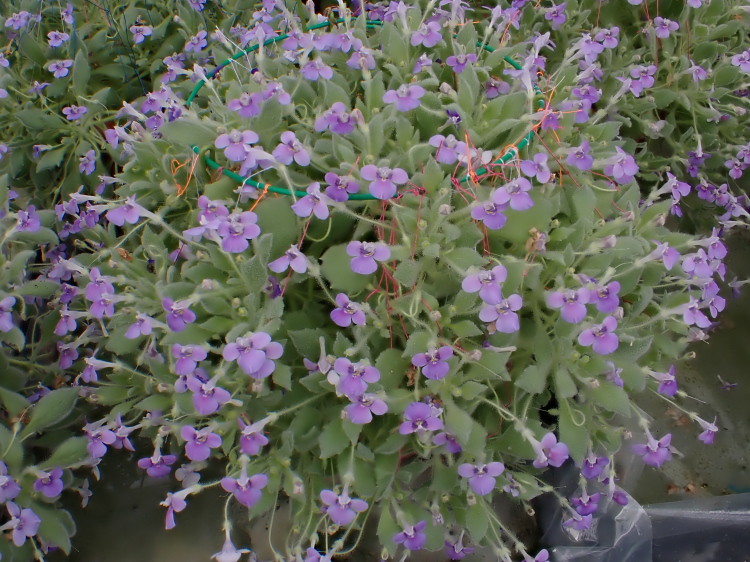 Regarding the botanical name,
When I posted to the forums,
Two names were valid as the family to which KSV belongs in the Western Australia Flora database, such as "Scrophulariaceae" and "Linderniaceae". When I asked Allen-san about this point, he said that each taxonomist had different judgment.
I can't enjoy talking to people who take on / pretend taxonomists. That feeling is getting stronger year by year.
I don't want to get involved in their discussions and disputes about classification and insectivory (carnivory). Thanks to Allen -san, I have been able to grow a lot of Byblis, so I may have something to say about ridiculous opinions, but otherwise I don't want to be involved in discussions or disputes / arguing.
In addition to having difficulty maintaining motivation to continue posting, I felt the danger of being involved in discussions and disputes as a real taxonomist had replied to my postings on a certain forum, and mentioned the latest literature. In this case, he is a real taxonomist / botanist / researcher, he is not a "know- it-all" person.

I have only seen two Lindernia species (Australian). Both look like carnivorous plants, but strangely they don't look very similar. I don't understand the definitions of this genus and this family.

I'm in awe of carnivorous plants, but I see and treat carnivorous plants as Ornamental plants. I report what I saw. You guys are free to discuss them, but I am not going to be involved in any discussions or disputes/arguing about them. 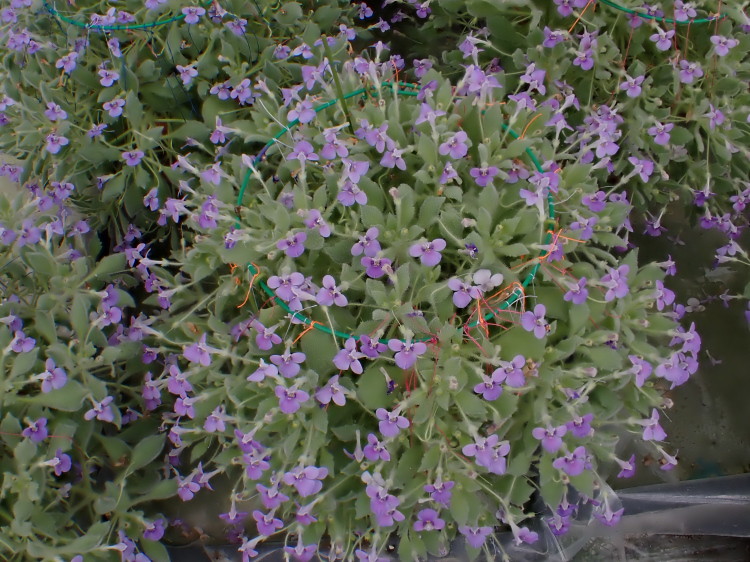 Moths and very small hoverfly-like insects that can hover in my area, both can hover, they appear to be able to mediate KSV pollination. This is in contrast to the lack of Byblis pollinators in this area. The lack of a Byblis pollinator is an advantage for me.

Please see Fantasy Flora time lapse 2 again. Although it is a time lapse series, the movement of the pistil in this video is the actual speed.

In the photo, in some cases, the moth may appear to perch on a plant. The moth is hovering by flapping its wings at high speed. This moth appears in my area from late summer to autumn. The photos were taken in 2011.

The little hoverfly runs away when I get close to it for shooting, so I haven't succeeded in shooting it yet. 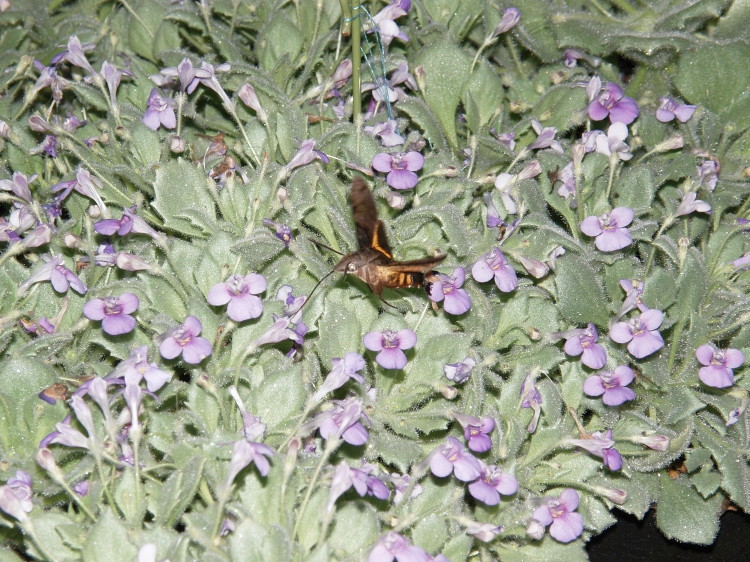 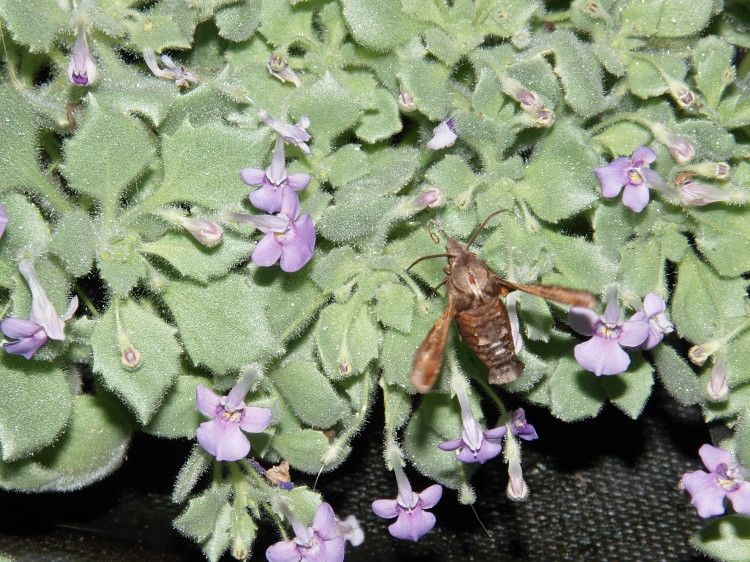 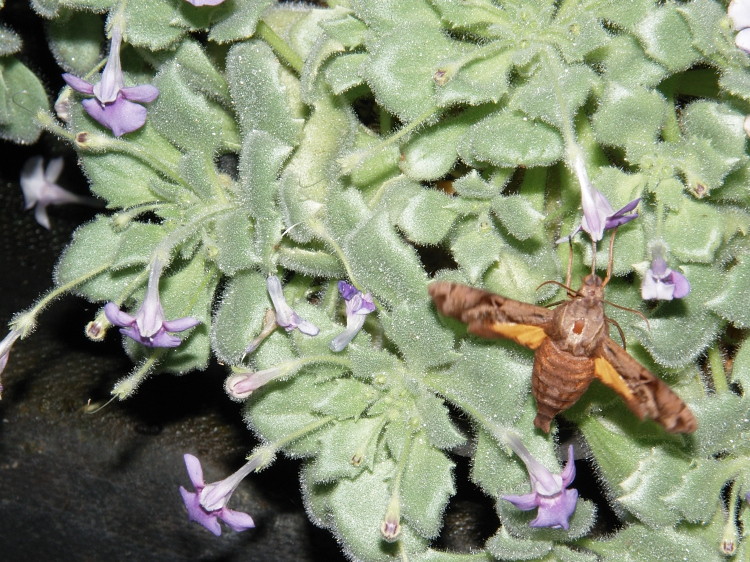 The temperature from sowing to transplanting to the pot is not necessarily terribly hot, but it needs to be terribly hot to grow crazy and look as beautiful as its own habitat, under my cultivation. In my greenhouse, this environment is from late June to mid-September.

According to Allen-san, hot air breeze of 50 degrees C may blow in its habitat.

The green ring with a diameter of 15 cm is not directly related to cultivation. Please watch the video again. The capsules are prevented from burrowing into the ground (the medium) by tying them with a thread so that the seeds are not soiled. 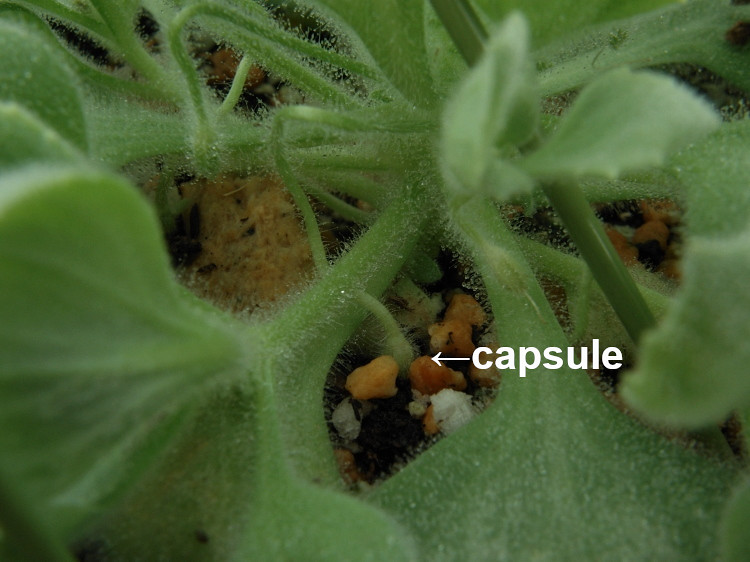 I noticed this phenomenon in 2013. When I first saw it, I thought it was a fall of condensation (dewfall). I noticed it at the end of summer, so further observations were carried over to the following year. 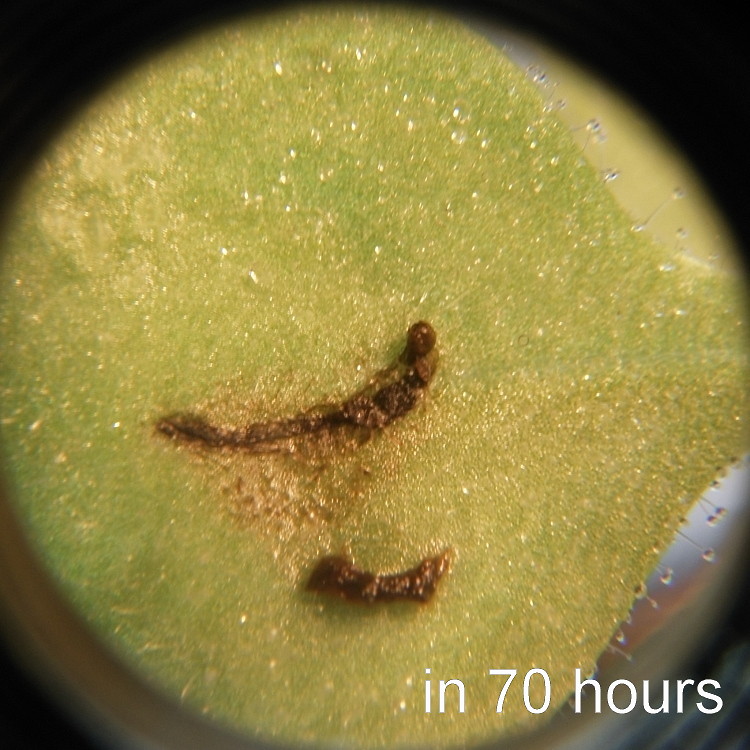 The conditions under which the pooling effect begins in my cultivation environment:

In the year of discovery, I realized that a terrible hot temperature was required for this phenomenon to occur violently. After reaffirming this phenomenon in the summer of 2014, I tried to shoot a video. I installed Timelapse software on my laptop PC and started shooting. The larva on the KSV the next day had no pooling effect. I wondered if my observations so far were dreams. I noticed something important. I continued to try shooting for the second time. Last time, I turned on the lights during the night all the time for shooting, but in the second shooting, I turned off the night lights and turned on the lights only when shooting a couple of times. I shot at night only on the first day.


The KSV was in a small plastic container and there was a slide glass between the cheap USB camera and the KSV. The temperature was set to about 30 degrees C to prevent the slide glass from fogging. This is a fairly low temperature for observing the pooling effect.

The pooling effect occurred in this second shooting. Please see from 14:02:53 to 19:04:23 on July 2, 2014. Something seems to be happening dramatically in the larva, rapidly the turbidity inside the larva hangs down and becomes transparent.

Night may also be involved in the digestive activity of other carnivorous plants.

As already mentioned, it seems that research on KSV cultivation and insectivory is being conducted in Europe. I don't know if they are studying the pooling effect, but I hope it will be revealed the pooling effect by the skilled grower / great researchers above or other researchers, preferably Australian researchers.
Last edited: Feb 13, 2022

Why did the seeds not ripen?

When I took this photo, I was convinced that I had succeeded in mass-producing seeds last year and reported it to Allen-san's daughter. How embarrassing.
I hurt my lower back and left calf in the spring. I had to work a lot to produce tomatoes, but I barely walked for over a month. Please take a look at this site.

Scented Byblis! | International Carnivorous Plant Society (proboards.com)
https://icps.proboards.com/thread/2348/scented-byblis?page=1
Tomatoes are planted on both sides of my wife with Byblis in her hands, B. aff. filifolia Giant from different locations, Pago region. Due to a slight delay in transplanting, seed production failed due to low temperatures. My mind is still 18 years old, but I have to admit that my brain and body are weakening.

I don't know when I can work on seed production next time because I already have other plans. You may be supplied first by the Europeans mentioned above. Even if I succeed, I'm not a worldwide distributor so don't ask me directly. I will consider measures so that you guys can receive supply from proper retailers. If you can't buy from the decent retailer because of economic disparities between nations, I would consider alternatives. 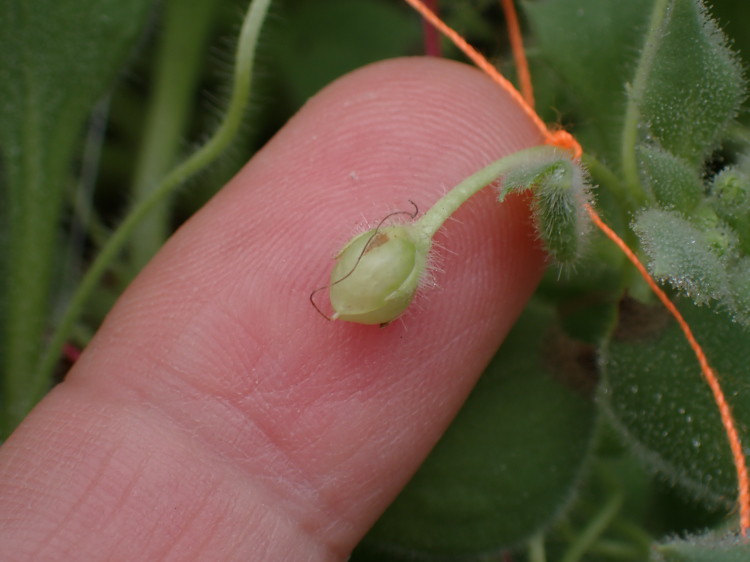 Finally, the individuals in these photos are clones from some inbredlines which I have been trying to fix the traits. Please compare them with your plants when you have the opportunity to grow KSV and see if there is any difference. 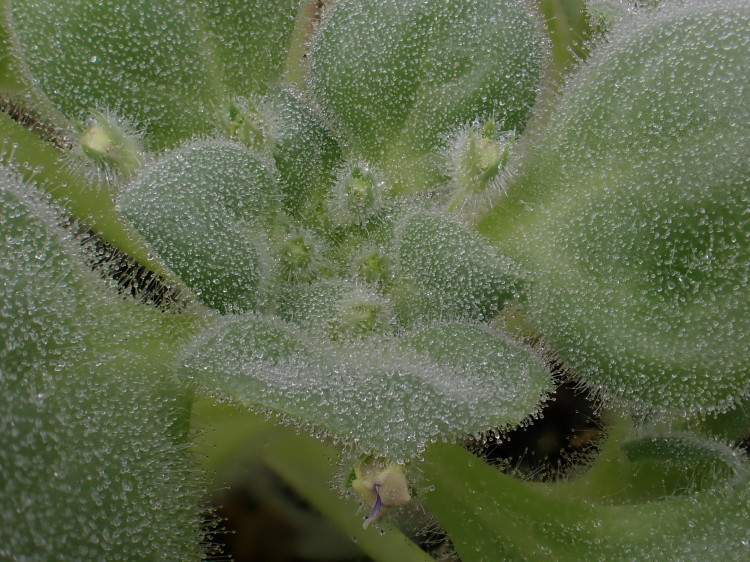 I am looking forward to hearing more about this plant and how to properly care for it.

Certainly the death of Allen Lowrie was a great loss to carnivorous plant lovers all over the world. He is responsible for so much information, so many plant materials including plants, seeds and tubers - and so much inspiration to so many growers.

“directed guttation”
Thank you very much for teaching me good English words. Reading the conversations of intelligent people stimulate my brain which has begun to cease functioning. It motivates me to learn a foreign language. I know the expression "guttation" in Japanese, but I was able to learn the expressions in English. After getting older, learning a foreign language is harder than I expected.

To be honest, when I noticed this phenomenon and reported it to Allen-san, I used the expression “drooling”. Allen-san said in a reply (I don't remember exactly): “Isao, “drooling” is the word you use when you see a beautiful woman.”

So, I decided to use the expression "pooling" suggested by Allen-san.

By the way, I learned the word "drooling" at Byblis Guehoi - Byblis - Carnivorous Plants UK (cpukforum.com). You can see the potential type Byblis filifolia I mentioned above.
I noticed a few differences from other Byblis filifolia complex with pink petal features, but I would like to reconfirm them before describing them on the forums. It's not a very good photo, so I'd like to grow it with other Byblis (pinkish mauve flower) side by side and take photos in a year when it wouldn't seem to be overloaded for me.

I hope this potential type B. filifolia will be studied by Australian researchers who will take over Allen-san's research.

Kind regards from the Far East

There is a very interesting thread.

By some chance, you might see persons like me doing low-level discussions, but it's a thread worth visiting once in a while. At least one of the contributors is good at keeping the thread decent. I secretly believe that his precautionary posts have prevented me from being attacked in the past ,due to my English skills, ignorance of Western culture, my personality, etc.. The thread has a high level of discussion, it is not my place to say something, but I got an invitation. So, I posted a few things. You can see how I shot "Fantasy Flora Time-Lapse 3 The KSV pooling effect 1" at a low cost.

These are certainly some very promising experiments! I look forward to seeing more in the future.

I too look forward to whatever more you learn. In my opinion you have already made the greatest discovery, showing directed guttation. Congratulations.

Thank you very much!

I still don't know what I can do this year. But I was inspired by this thread and wondered if I could do anything. I didn't want to use the seeds that I plan to use for mass production of seeds in the future, so I wondered if there was something I could save from last year's failure.
In some pots, I had devised a way to prevent the seeds that fall from the capsules that stick out of the pot from falling into the water of the tray. I used a stereomicroscope to collect promising seeds from many dead KSV debris and abortive grains.
The seeds are so dirty that I don't know if they can be introduced into sterile conditions using PPM, but I wanted to see if they would germinate. I soaked the seeds in 500ppm GA3 (gibberellic acid) solution for 24hrs. Then I sowed the seeds on the night of March 12th. The photos were taken on the night of March 15th. It is the state of the third day after sowing.
When I see the seeds of KSV, it reminds me of a rock climber's tool. Probably an evolution to keep it from falling through crack in the sandstone. Gleaning seeds from the debris sounds like a lot of effort, but very much worthwhile. Congrats on your sprouts!
You must log in or register to reply here.

Z
My drosera capensis is growing a new...root? Should I do something with it?